END_OF_DOCUMENT_TOKEN_TO_BE_REPLACED

Vibrato as a pedal effect is having a moment. Boss has released the Waza Version of the Boss VB-2 and EarthQuaker debuted the Aqueduct. I recently did a column on the effect for Electronic Musician, and now here is the Joe Gore Purr Vibrato. 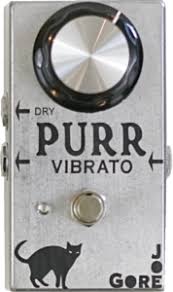 Today, EarthQuaker Devices drops their Aqueduct Vibrato ($199 USD), a true pitch-shifting vibrato. You will soon see lots of demos. I am throwing my hat in the ring with a few sounds that might interest the modern guitarist, as well as a review (spoiler alert, it’s a rave).