When Sonuus introduced the Wahoo, a massively configurable, DAW controllable wah-wah/filter pedal, it was revolutionary and we quickly reviewed it here. Now they are offering a similarly unique and versatile volume controller that acts as a volume pedal and much more.

Last year, Sonuus first showed the programable Wahoo Analogue Dual-Filter/Wah pedal at a NAMM show. Having reviewed their brilliant i2M audio/MIDI converter, I was interested in anything else they might have up their sleeve, and this new pedal, offering Moog-style filtering in addition to more typical wah sounds, looked promising. The fact that note tracking could modify the filter changes was particularly intriguing. Well, I finally got my hands on one. Does it live up to the promise? Read on… 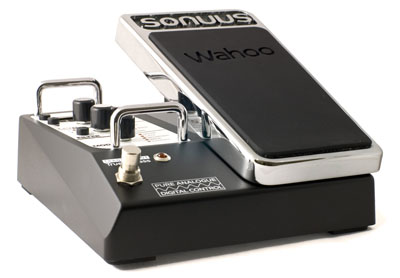