Sarah Lipstate has been a unique voice in modern guitar ever since she went solo as Noveller and began her distinctive looping performances. You can get the back story in my first Guitar Moderne interview, as well as in the one I did for Guitar Player . Much has happened in Noveller-land since then, so on the occasion of the release, A Pink Sunset for No One, it seemed time to sit down with her and find out how she has taken the one-time niche of guitar looping to the big stage with the likes of St. Vincent and Iggy Pop. An admitted gear-junkie, we delve into the goodies she is using, (spoiler alert: like Eno she eschews the comfort of the familiar for the excitement of experimentation.) But Sarah was also candid about her artist’s journey: how she came to these extraordinary opportunities, and why she decided to forsake Brooklyn for Los Angeles.

END_OF_DOCUMENT_TOKEN_TO_BE_REPLACED

The New York Guitar Festival is one of the few things that makes me wish I still lived in New York. If you live there or can get there don’t miss it. The Festival returns this year with a week of concerts, from May 8 to May 14, followed by a day of free workshops, master classes, and panel discussions on May 15. Players of particular interest to modern guitarists in the 2016 roster include David Torn, Nels Cline, Vernon Reid, Noveller, and Wolfgang Muthspiel. The opening Mother’s Day concert at Brookfield Place Winter Garden is in honor of the late Sister Rosetta Tharpe, with guest curator Luther Dickinson. 2016’s Guitar Marathon will take place at The Cloisters in Fort Tryon Park, where rather than be confined to a single stage, the music will flow throughout the entire complex. Other venues include National Sawdust, and DROM.

END_OF_DOCUMENT_TOKEN_TO_BE_REPLACED

Touring is getting tougher and more expensive, so Sarah Lipstate A/K/A Noveller pulled a “Honey I Shrunk The Pedal Board” for her European tour. She was kind enough to steal a moment from packing to give us the rundown.  You can read about her original sized rig and see a video of it here. If you are anywhere near these shows, you can hear her make uniquely beautiful music with her new pedals. 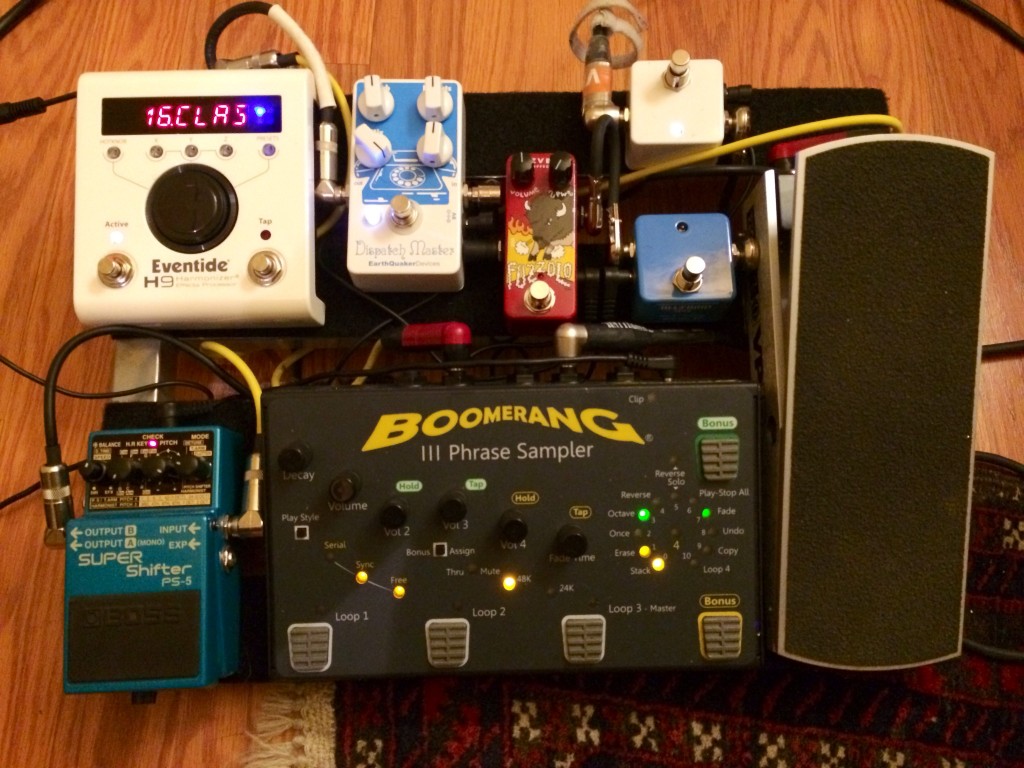 END_OF_DOCUMENT_TOKEN_TO_BE_REPLACED

Sarah Lipstate A/K/A Noveller is sharing her experiences touring as the opening act for St Vincent. She was kind enough to expand a little on her setup to Guitar Moderne.

“On my newest album No Dreams, I incorporated synth textures for the first time in my work as Noveller,” she explains. “I’d been working a lot with synth and other midi sound libraries for my film score work and felt inspired to try supplementing my guitar sound with tasteful synth tracks.  When I started figuring out live versions of the new songs, I discovered that my iPad (coupled with the Alesis iPad dock/interface) would allow me to trigger the synth sounds using a footswitch. I use an app called BeatMaker 2 which is footswitch compatible and allows you to import high quality audio samples for playback. It’s worked great until the first show of this tour with St. Vincent. I freed up some of the memory on my iPad and that has seemed to fix the problem. Fingers crossed that it continues to work!”

Noveller first appeared in Guitar Moderne after the release of her Glacial Glow record. A video gear guide was offered here as an adjunct to my Guitar Player interview.

“Cinematic” is an overused word when describing ambient music, but in the case of Sarah Lipstate, who records and performs as Noveller, it is thoroughly appropriate. Lipstate is a filmmaker who has been known to hand-stitch thread into celluloid to create visual experiences as unique and abstract as her recordings. Whether it induces external or internal images, her evocative record No Dreams is sure to take you on some sort of journey.