Three of the most prominent modern guitarists in the world got together on June 11, 2013 at Le Poisson Rouge in New York City. Fortunately someone captured it on video.

END_OF_DOCUMENT_TOKEN_TO_BE_REPLACED

Often modern guitar can be about context. In Radiohead guitars are warped and mangled sonically, but here Thom Yorke  perfectly places a normal guitar sound  in an EDM type setting. Any suggestions for others out there doing this?

PS Check out the cool use of the Electro-Harmonix looper on his voice.

END_OF_DOCUMENT_TOKEN_TO_BE_REPLACED

On May 25th, the world’s best record store for experimental music held their 21rst Anniversary Show at one of the best venues for experimental music: Le Poisson Rouge in New York City. The featured acts were Kalabalik, with Raoul Bjorkenheim, Anders Nilsson and Gerald Cleaver; and the debut duo appearance of Nels Cline and Julian Lage. The event also served as a CD release party for Kalabalik’s debut p on DMG/ARC Records. 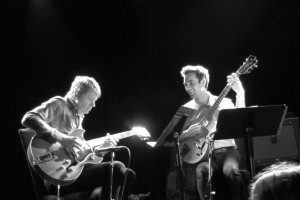