In my video intro I say I first saw Gerry Leonard with Jonatha Brooke in in San Francisco. I might be wrong about that, but once I moved back to New York I saw him often in his guise as Spooky Ghost, both solo and with an amazing band, performing feats of looping magic while singing haunting, Gaelic-tinged, original songs. One of those nights, in a tiny Tribeca club, I found myself sitting practically on top of David Bowie as he checked Leonard out for his band. The rest is history as Gerry went on to be musical director for David Bowie’s Reality Tour and have his guitar  featured on Bowie records, “Heathen,” “Reality,” and “The Next Day.” We discuss that fateful night and much more.

END_OF_DOCUMENT_TOKEN_TO_BE_REPLACED

I occasionally play a party game with friends. I posit, “Everybody laments musicians who die young, like Jimi Hendrix, John Lennon, Janis Joplin, et al, saying, ‘What might they have accomplished if they had lived.’” I then say, “Name as many musical artists as you can, who lived and have continued to grow and be creative.” My list tends to be short: Dylan, Joni Mitchell, Neil Young, Jeff Beck, Jim Hall (while he was alive), Pat Metheny, maybe one or two more. It occurred to me today, as I learned of David Bowie’s death, that I never included him. On reflection, I realized it was because the fact that he would continue to grow and change as an artist as he aged was so obvious it didn’t bear mentioning.

END_OF_DOCUMENT_TOKEN_TO_BE_REPLACED

When master modern guitarist Gerry Leonard (a/k/a Spooky Ghost) is not acting as musical director or recording with David Bowie, he can be found accompanying the likes of Rufus Wainwright or Suzanne Vega. Here he give a detailed explanation of his gear setup on tour with Ms Vega. 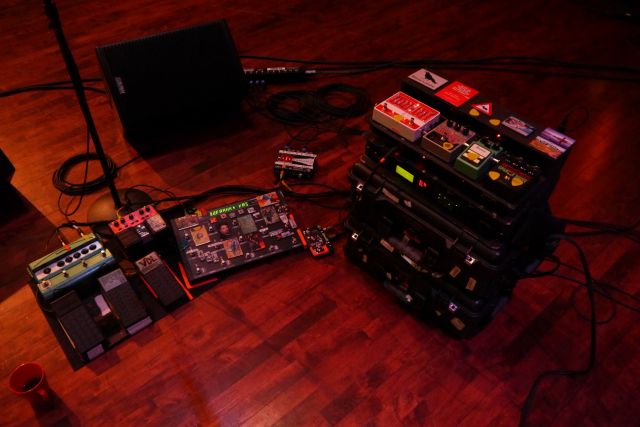