The Greatest Show on Mars, the latest outing from Clothesline Revival, fully embodies the Roots Moderne aesthetic; Conrad Praetzel’s finger-picked and slide guitar, along with occasional banjo, join beats and synths in a tightly woven tapestry, often accompanying samples of Lomax recorded accapella singing in a way that seems utterly natural. For his first three Revival projects, Praetzel was joined by fellow Bay Area resident Robert Powell on pedal steel, lap steel and various other stringed instruments, as well as a rotating cast of actual vocalists recreating the spirit of American roots. This time Praetzel is alone—just a man and his studio.

What kind of music were you playing when you first became proficient on the guitar?

I got into finger picking explorations in open tunings inspired by John Fahey very early on. Even before I had a guitar, I remember trying to learn some finger patterns watching Laura Weber’s guitar class on PBS TV. I put six rubber bands around a glass ashtray and practiced with that.

Who were your guitar inspirations?

Along with John Fahey, Bert Jansch, Leo Kotke and Mississippi John Hurt were big influences on my playing style when I was starting out. For electric guitar it would be Michael Bloomfield, Neil Young and Jim Hendrix. There are lots of others though.

Later on, as I dug back deeper to the “source,” I got into some of the great country blues players particularly Mississippi Fred McDowell, Blind Willie Johnson and Muddy Waters.

When did you get into electronic music?

I guess my earliest experience with electronic music was playing around with my first tape recorder back in the late 60’s. I had a Sony reel to reel that would do what they called “sound on sound.” You could bounce the track from one channel to the other and at the same time record and mix something new on the second channel. I found you could coax all kinds of wild sounds out of a tape recorder by patching the outs to the ins to create a feedback loop and then playing with the tape recorder like an instrument using the level controls and front panel switches to control the feedback pitch. Later in the ’70s I bought my first synthesizer, it was made by Korg and you could only play, or record, one voice at a time with it, but that was what was available at the time. It was exciting and added another dimension to my guitar recordings. Brian Eno had a major influence on my recording process. I admired his “anything goes” approach and how he used the recording studio as a compositional tool.

What led you to combine roots music with electronic music?

This is something I experimented with for a long time before I actually recorded anything I really liked. The funny thing is it happened when I wasn’t working with Western roots music. I was attempting to express myself in a collaboration loosely based on “Eastern” roots music. This was while recording my fourth album, Receive, as Conrad Praetzel, not Clothesline Revival. I was working with Sukhawat Ali Khan and Robert Powell. Sukhawat is from Pakistan and sings in the traditional Qawwali style. He comes from a family of singers that goes back several hundred years. I was very happy with the way this collaboration turned out. There was an organic quality to it that had somehow eluded me in the past when I had tried to combine roots music and electronic music. Receive came out in 1998 and right after that I started working on what became the first Clothesline Revival album, Of My Native Land. I remember the first idea I started working with was sampling Leadbelly’s archival field recording of “Cow Cow Yicky Yicky Yea” and arranging something around that. 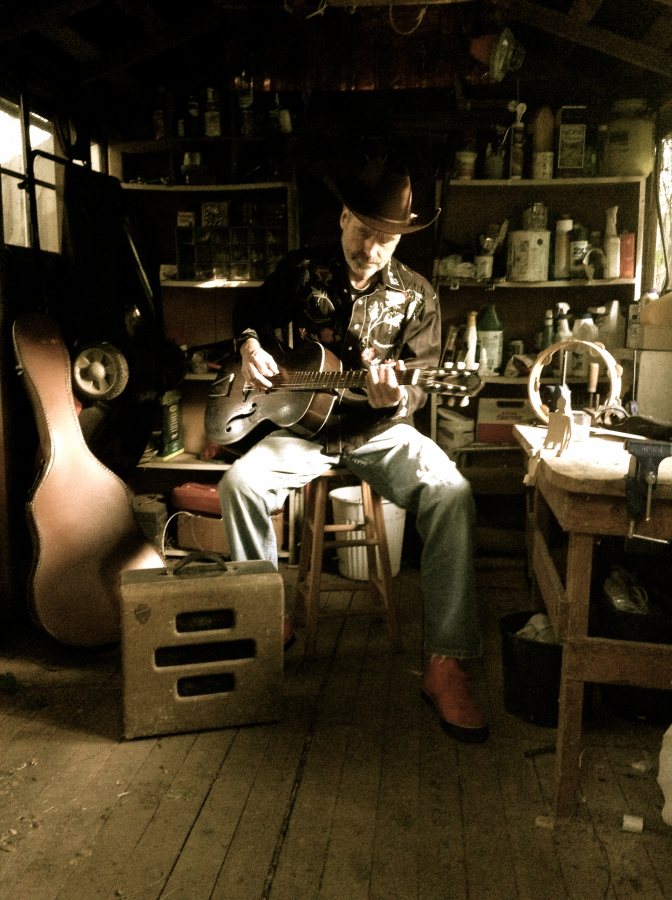 You collaborated with Robert Powell on your first three Clothesline Revival records. Why go solo on this record?

Actually the first two were more like a collaboration but on the third record, They Came From Somewhere, Robert played on less than half of the tracks. I’ve always enjoyed working with Robert; his contributions have been invaluable and have really made some of the songs. For the Greatest Show on Mars, the more I got into it, the more it felt right to try and do it alone. I played all the instruments except for a harmonica part and that was part of the archival field recording I was working with. It was a challenge to create something that didn’t sound one-dimensional, which felt somehow like a group. One thing I found that helped with that was to let a good chunk of time pass between laying down parts, so hopefully I’d have a fresh perspective each time around.

That’s tough to answer, as it’s really more about a feeling and emotions than anything else. I can remember the impact listening to music had on me when I was very young, like 5 years old or so, too young to have developed any sense of what was supposed to be musically cool. I’d listen to these old 78s my Dad would give me and some songs had an immediate pull—somehow they just were cool. That’s what I’d like my music to do.

I used a wide variety of acoustic and electric guitars, mostly vintage guitars but without the vintage price tags. The only “new” guitars I used were a Gretsch 6120-1959LTV and an Eastwood Airline Tuxedo, and those are recreations of guitars from the ’50’s. I used two acoustic guitars, both from the 1930’s: a Regal archtop and an ArchKraft roundhole archtop. I didn’t just mic those, I also electrified them with a DeArmond monkey-on-a-stick pickup from the ’60s. The miked and electric tracks gave me lots more flexibility in the final sound. You can hear the ArchKraft with the DeArmond on “March of the Cosmic Puppets.” The guitar is tuned down to open C. The guitar on it’s own, miked, is bright and sassy sounding, lots of midrange and little low end. The pickup adds the bass and with the low open tuning it almost feels like a bass and guitar playing at the same time. The second guitar on that track is the Gretsch 6120. 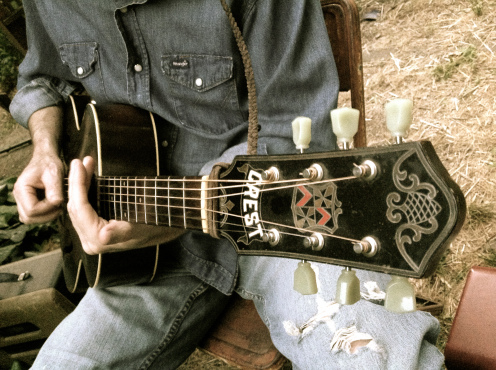 I’m doing everything myself in the studio so this means wearing several hats and often at the same time. I’m always looking for ways to streamline the engineering part of it so I can focus on being a musician. For electric guitar I’ve found that reampling is a great tool and I recommend it to anyone that is engineering his or her own recordings. The time and energy it takes to setup an amp can be a real pain and a drain on inspiration. Reamping you don’t have to worry about whether the amp settings and mic placements are right. The amps I used for recording are both from the ’50’s: a Gibson GA-18T and a Valco made Bronson Supreme. They’re both small amps, 15 watts or so, 10″ speakers. The Gibson amp has one of the best sounding tremolos I’ve ever heard. It has all the original tubes and I’ve been told breaks up at a lower level than it should but I love the tone and wouldn’t change or replace anything until it really needed it. 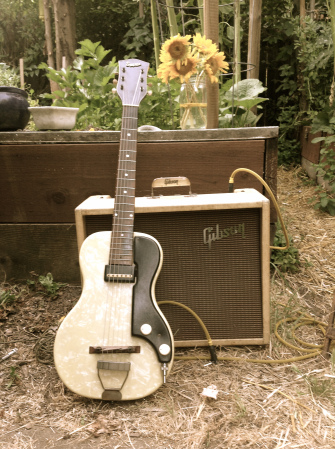 My go-to electric guitar for slide is a Supro Ozark made by Valco from the early 1950’s. It was one of the first solid body electrics and has a tiny body, a fat neck and a ballsy single pickup. They look like they were engineered from the lap steels that Valco also made and might even have the same pickups. I’ve seen videos of Ry Cooder playing the National version of this with John Lee Hooker. I played mine on the opening track “O Happy Land” and on “Move Up.” I also have a Res-o-Glass electric made by Valco, a Dual Tone from the mid ’60’s. It’s branded an Oahu and I played that on “Not Have No Spot” where I accompany an 80-year-old preacher.

I only use a few pedals when I’m recording guitar tracks. A Diamond Compressor, which I always use to some extent to fatten the sound; and an Electro-Harmonixarmonix Harmoniz        Bass Big Muff when I want extra crunch or distortion. I use the Big Muff in a blend mode where it mixes some of the distortion into the dry signal. The full on distortion is too much and not articulate enough for my taste. The only other pedal I record with is the Dr. Scientist Reverberator; I use that sparingly as I can always add more space in the mix.

My audio interface is an Apollo made by Universal Audio. It’s great for tracking with plug-ins and has almost no latency. Universal Audio plug-ins, I think are the best emulations of vintage recording gear and effects out there. Some I like to use are the Teletronix LA-2a, the Fairchild compressor and the Lexicon 224 and EMT140 reverbs. I especially like their version of the Roland Space Echo and the Cooper Time Cube.

Clothesline Revival seems like a strictly recording project. Have you ever taken it live or do you plan to?

No, I haven’t and I have no plans to. I’ve never been a performer. I guess I’m missing that gene. For me it has always been about the recordings.

As I don’t perform this is one way—thanks! So good press, radio airplay mostly on NPR. For YouTube I’ve created and posted several videos that draw from archival films and cartoons for the visuals, in a similar way that a lot of the songs do with the vocals. I typically take 3-4 years to finish an album, so it’s always a challenge to reconnect with fans and the music industry. Fortunately I’ve had a few lucky breaks that have really helped, like getting reviewed on NPR’s All Things Considered.

A number of the Clothesline Revival recordings have been worked around archival field recordings of vocals. Maybe twenty songs total, mostly from the fantastic collection that Alan Lomax and his father assembled for the Library of Congress back in the 1930s through the 1950s. These are acapella vocals so musically I’m always starting with just a melody line and then I work the arrangement around that. What I like about this approach is that you have a lot of freedom where to take the song as far as the rhythm and the chord changes and even the mood. So one thought I’ve had, as far as collaborating, would be to work with a vocalist with similar musical tastes and have them record just their voice, and then do the same type of thing I’ve done with the archival recordings and see where it goes. Tom Waits or Lucinda Williams are two singers I dream of working with that way but it could be anyone that I connected with.

Is there any one else doing Roots Moderne type music that you would recommend?

I dig what Jim White has done and I think he might qualify. Check out 10 Miles To Go On A 9 Mile Road or Wordmule.