You may know Ted Drozdowski’s name if you were a fan of the late, lamented Musician magazine, or read his articles in Premier Guitar magazine and his posts on the Gibson website. A respected music journalist, Drozdowski has also studied Mississipi Hill Country Blues with masters like R.L. Burnside and Junior Kimbrough. With his band, The Scissormen, he keeps the flame of this elemental blues style alive, while adding a modern psychedelic aspect that only adds to the music’s mystery. 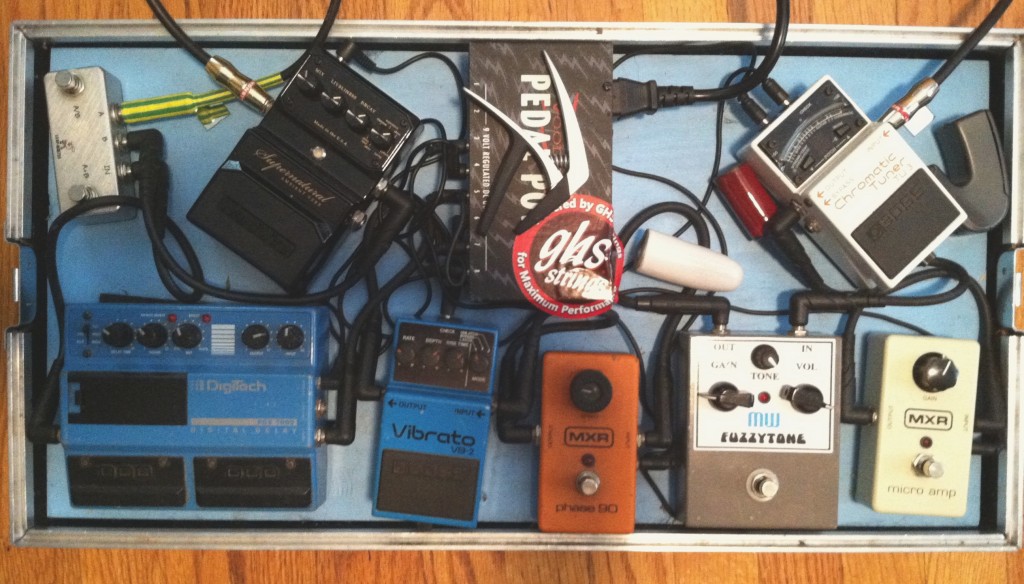 “Early this year I decided to pare down my pedal board, which used to occupy a fairly large keyboard flight case and contained a looper and multiple distortion pedals and delays, into something pithier and lighter—the essentials. For now, since the line-up of pedals shifts, they are a Boss TU-3 chromatic tuner, an MXR Micro-Amp, an MW Fuzzytone, an MXR Phase 90, a Boss VB-2 Vibrato Pedal, a DigiTech PDS-1000 digital delay, an AB/A+B box from Rock Block guitars in Nashville and a DigiTech Supernatural Ambient Reverb. A Voodoo Labs Pedal Power box keeps everything juiced and I’ve got a spare capo, lap and round neck slides made by Doc Sigmier of Rocky Mountain Slides, and an E-Bow always riding in the box. The GHS sticker reminds me that a former drummer stepped on the outlet in that corner, so it’s useless. ‘Don’t plug into me.’

“Nothing fancy, but I can generate a wide variety of edgy and classic tones quite easily, and get trippy with a tap here and there. For low-volume gigs, the Micro-Amp gives me a little more responsiveness when I grab the strings with my fingers; I mostly finger pick in a unique junkyard style. In high-volume settings, I sometimes use it to boost solos. The real dirt comes from the Fuzzytone’s foul mouth. Mine is a first generation version of this killer split germanium/silicon pedal, so I used a file to make a notch for the power cable. This is a really uniquely voiced pedal: very warm and very, very dirty with a pushy, aggressive distortion that snarls like a fat dragon. It’ll slap yer head. I love it!

The VB-2, about 30 years old, has a gorgeous shimmer and lift. I keep the rate at roughly 10 o’clock and the depth at 2 to create snaky single note lines for the really spooky tunes, like “The River” from the next Ted Drozdowski’s Scissormen album. The VB-2 is a Holy Grail pedal. Even though it’s also an antique, I love the PDS-1000 more than any other delay. Unlike modern delays, it has an overall signal boost that’s great for solos and sports a compression character that makes the entire rainbow of core sounds and overtones sparkle. It’s a secret weapon for creating awesomeness. After the AB/A+B box, signal B runs into the Supernatural, which I use in the “shimmer” and “shine” settings to color only one of my amps. I crank up the effect when I use it, and in two amps that would cause the overall guitar sound to become too diffuse. But for the “The River,” “Delta Train” and my other surrealist blues compositions, the upward cascading overtones produced in the ‘shimmer’ mode and the waves of chorus with slight pitch shifting in ‘shine’ are perfect for adding creepy atmosphere — a kind of sonic fog that creeps in around the core sound. 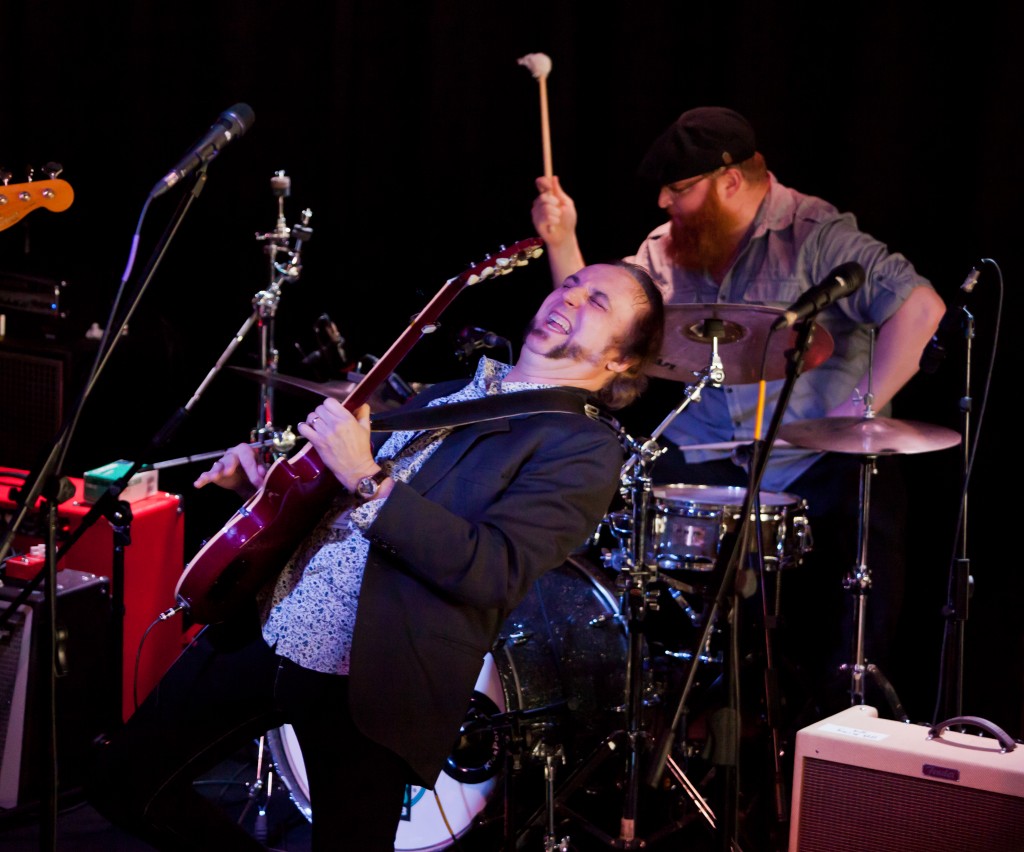 “I always run two amps. Lately my preference has been a Mesa-Boogie Dual Rectifier Tremo-Verb head—the most awesome Fender Bassman ever—pumping an Eminence 1×12 cab and my Epiphone Valve Standard, which also has an Eminence Private Jack 50-watt British profile speaker inside. For guitars, I’m usually playing older Gibson Les Pauls or a Flying V with humbuckers, for the beef, or my customized early ’80s Fender Esquire reissue with jumbo frets, a steel-plate anchored bridge and a pair of humbuckers from a late ’60s Les Paul that was destroyed in an auto accident.  The only single-coils I take onstage are in my Epiphone one-string and my electric lobster pot diddley bow, which have fat, biting tones that’ll gnaw through your skull.”