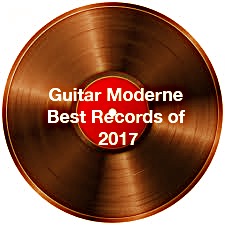 Up and coming future modern guitar legend Nick Reinhart makes the list with the latest by his band. Once again pushing the limits with their punk/prog sound.

A modern guitar supergroup if there ever was one. Two generations of players who have mastered their basic instruments and gone on to develop a cyborg-like extension of the guitar through effects.

As he did as early as 1991, with his band Krakatau, Björkenheim again brings the classic electric guitar/acoustic bass/drums/sax ensemble into the modern age.

Kudos to Kaiser for bringing this summit of modern guitarists together to pay tribute to a pioneer, and for making sonic sense of it all.

Experimental guitar pioneer Frith joins with Jason Hoopes on bass and Jordan Glenn on drums to once again show us how it is done.

His work with Nels Cline and a recent set in Nashville showed that Campilongo is moving beyond Roots Moderne into pure Telecaster-driven modern music.

Over 20 years ago Granelli brought two of my favorite artists together in an unlikely pairing for A Song I Thought I Heard Buddy Sing. They are back with another blues-based set that demonstrates how two guitarists can approach the same material so differently and with equal brilliance

Former Sarah McLachlan guitarist Luke Doucet and his wife Melissa McClelland continue to evolve their own brand of North Americana, combining twangy and fuzzy guitar with modern beats and other contemporary touches. The singing and songs are great too.

Marco Giovano’s production helps guitarist/vocalist Parcek proffer an album of blues that delivers the dark mystery that makes the genre so attractive.