One day I was reading Leo Abrahams’ blog  when I turned to my wife and said, “I want this guy’s life.” He had been describing the week’s activities, which might include a session with Brian Eno, live gigs with the likes of Bryan Ferry and Marianne Faithful, a solo guitar gig performing tunes from his instrumental records Scene Memory and Honeytrap, composing film music for The Lovely Bones, arranging strings for Ed Harcourt, or producing an up and coming band like  Frightened Rabbit. Recently, with little time for his own music, he has managed to cobble together an EP of six-songs, Zero Sum. Though not a “guitar” record per se, it is chock full of guitar generated tones that will prick up your ears. I have interviewed the British musican before, most recently for a piece on using a laptop in live performance. Here we get a glimpse of the man’s beginnings, influences, and gear.

I started out on piano, and then went through a lot of different phases on the guitar—classical and folk at first. Then I got into Frank Zappa, whose solos I assiduously transcribed, and then, through Zappa, Steve Vai, which led me to acquire what modest technique I possess. After that, through meeting Imogen Heap I was inspired to take more of a textural approach to the guitar and investigate effects just as thoroughly as playing.

Just curiosity really—the impetus for me has always been wanting to find stuff out about the instrument and sound in general. I really enjoy taking that approach to playing in a mainstream context as well, and that is probably where my main interest lies.

Guitar-wise, I love Marc Ribot—a true master who has such a broad range, and an incredibly potent sound and musical personality. I also really like Nick Zammuto (from The Books), Kevin Shields, Roy Montgomery (who was very influential for me), Saint Vincent, and Leo Ross. I get inspired by everyone I work with as well, and can still feel the pull of the classical influences from when I was a composer—particularly Morton Feldman and Stravinsky.

Maintaining curiosity and never feeling I am quite good enough.

Nothing except pure sound for the sake of it. I think if I was consciously trying to convey something then I wouldn’t enjoy it. But when I play or produce for singers, I like to try and find ways to frame their lyrics for maximum effect.

For my live set-up I split my signal between pedals going to an amp, and a laptop running Apple’s MainStage, which mainly hosts Cycling 74 plug-ins. For pedals I love the Death By Audio Apocalypse for fuzz, Electro-Harmonix Ring Thing for its ability to automatically tune its ring modulator, a Boss PS-3 for reverse delays, and I’ve been getting a lot of use out of the Earthquaker Rainbow Machine recently.

What were some of the challenges of recording and playing live with Eno and what gear were you using for the live gigs?

No challenges—only joys! It’s always a very open process, and all you need to do is go along with it. Sometimes the situations are intense, such as doing sessions for Paul Simon and Grace Jones, or doing three live improvised concerts in one day at the Sydney Opera House, but he always makes it feel secure and calm. For recording I often keep the effects chain very simple, allowing him to process the sound in real time and then responding to those treatments. For the Pure Scenius concerts I had the set-up described above, using my 1968 SG Custom and a Swart amp.

What kind of processing Eno does do on your guitar?

It’s mostly various Logic plug-ins: frequently extreme compression and distortion settings. For the Grace Jones record and Lovely Bones soundtrack he was processing my guitar through a chain of Korg Kaoss pads in real time, causing different kinds of rhythmic glitching. For the guitar solo on “Caught Between” from his album “Another Day On Earth,” it was Antares Autotune, which caught some long slides up the neck and turned them into a diatonic scale. More recently we had a day experimenting with the Moog guitar, which was great.

What is that sound at the beginning of “Signal” on the solo performance video?

A plug-in called Camel Crusher through Cycling 74 X-former, and some Logic delays.

What system were you using for the live looping stuff on YouTube?

A plug-in called Sooperlooper, controlled by a Behringer footpedal. I stopped using that system because I was doing more tap-dancing than playing though!

Recording, because you are creating something that endures, whereas your perception of a gig can be skewed by so many things, from the audience reception to the lighting. Having said that, nothing beats the excitement of doing a free improv show with great players.

I’m not sure that I have to be honest! I’ve always felt like a collaborator primarily, and more recently have devoted my time to production. I think that people mostly discover my music through my association with other people—but to my shame I’ve never gone out and sought an audience. That might change with my next record though…

Whatever happened with the FTS: Rhythm Of Strings project?

The intention was to perform that project a few more times, but I think everyone just got busy with other things. Also it was partly improvised and perhaps it was hard to envisage a way to keep it fresh.

Who else would you like to collaborate with and why?

Right now I would love to meet a completely unknown artist who makes me want to drop everything in order to help them. I’ve done quite a lot of working with people who are established, and perhaps not enough of developing unknown talent.

Playing a solo on a Silvertone with Bryan Ferry on “Slave to Love.”

Care to elaborate on your current record, Zero Sum?

Zero sum wasn’t a ‘guitar record’ in the way some of my others have been. For a lot of the electric parts, especially on the single, “Thats What You Do,” I used a very rare ’60s Italian guitar called a Meazzi Hollywood. It is active and has giant sliders to blend the pickups, which are extremely powerful and bright to the point where you hardly have to touch the strings to generate lots of overtones. “Winter Kiss” revolves around a 1920s parlor guitar, restored by Jon Dickinson (who also makes great amps). “A Different Kind Of Wrong” features loops played on a fretless guitar, which I had modified from a Carvin that I owned as a teenager. And “Time Take Me Back” features my James Trussart Tele, which I always close-mic and blend in with the amp signal to get a dobro-like effect. 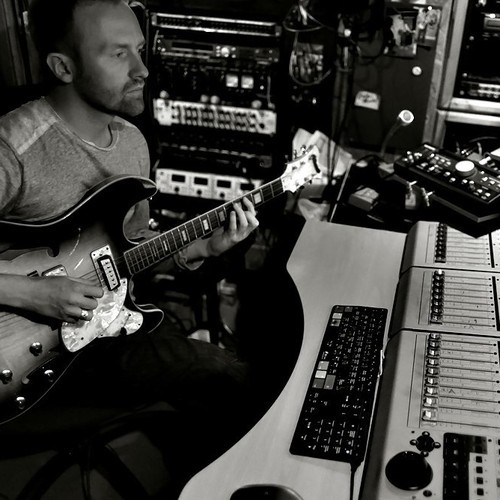 I am just over half-way through a new solo album that sounds nothing like any of my previous five. I’m really excited about it and just need to get a film score and some gigs out of the way so that I can get on and finish it. I am hoping it will be available next Summer, and I’m sure it will be available through the usual channels – both legal and illegal.