In contrast to the increased size of Winter NAMM 2018, this year’s Summer NAMM in Nashville seemed a bit smaller than last year’s event with fewer big product unveilings. The fare skewed traditional rather than cutting edge, even more so than usual. That said there were some cool new offerings worthy of mention. 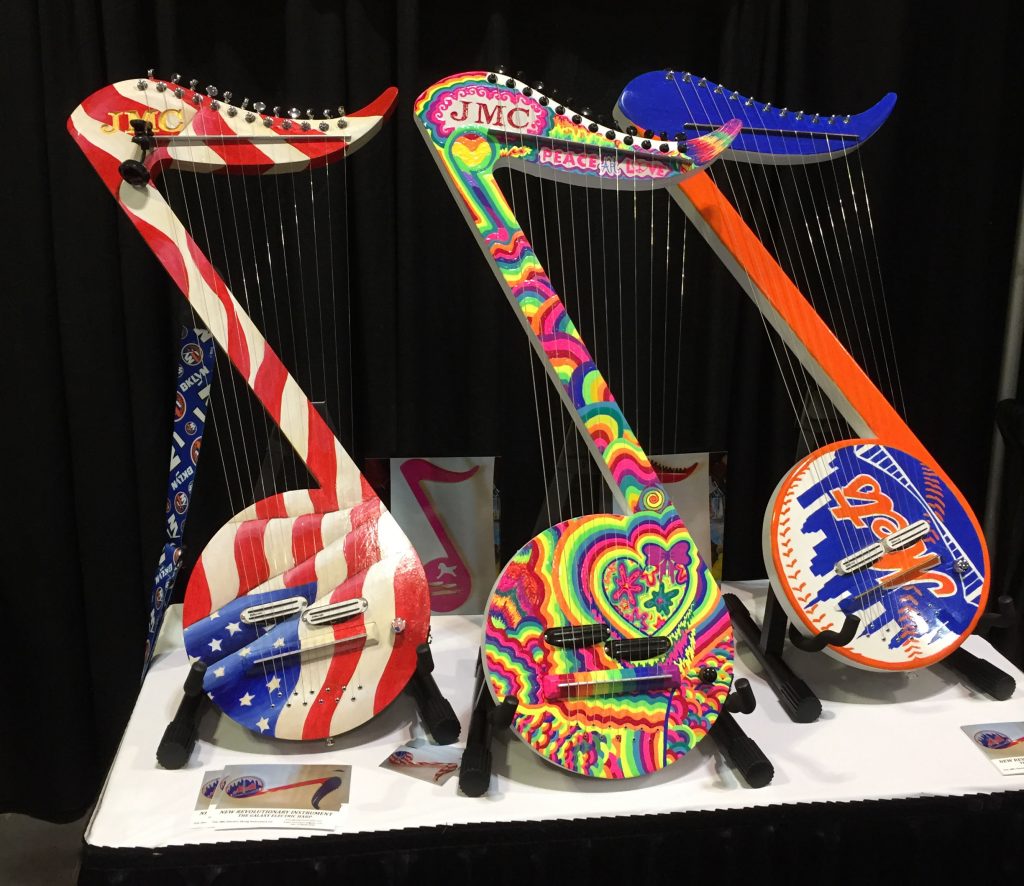 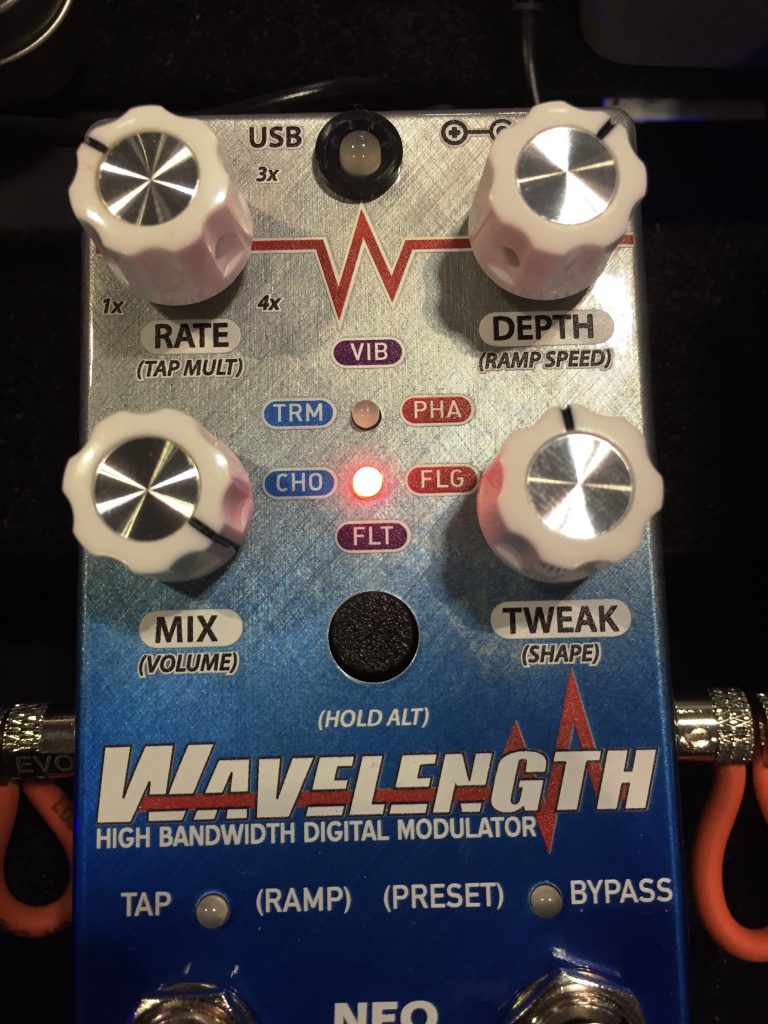 Even Alexander, usually a purveyor of things like the wacky Syntax pedal, went more traditional with a modulation multi-effect. They took everything from their Waveland Multi-Modulator and added more modulation engines, tap tempo, selectable waveforms, while keeping it the exact same size. 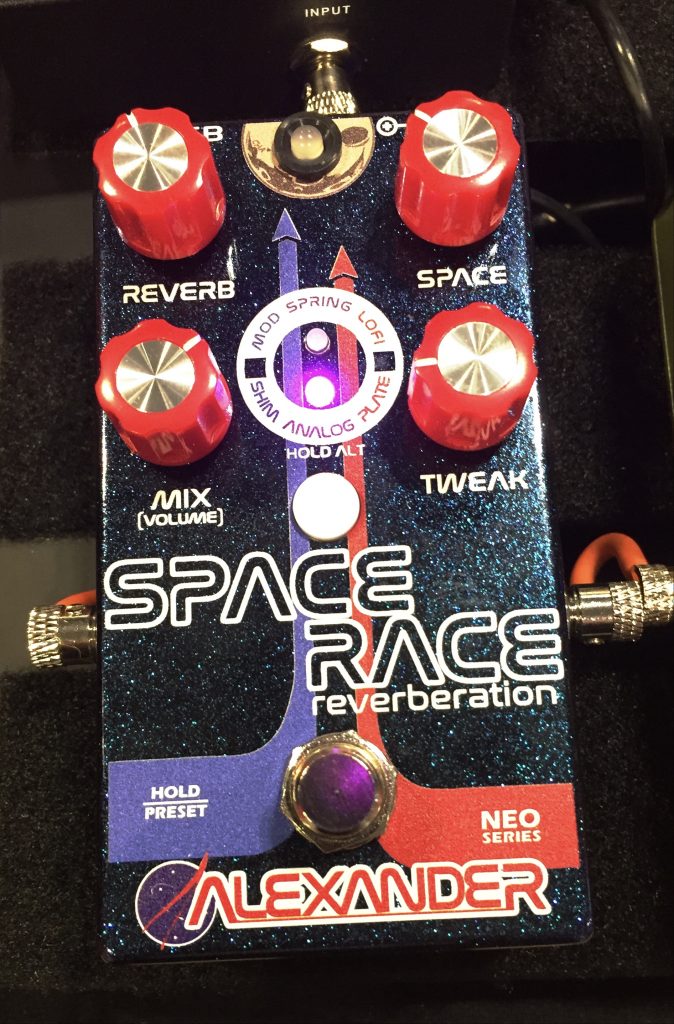 Entering the growing field of multi-reverbs, Space Race features the usual suspects: Plate, Spring, Shimmer, etc. Their take is special in that this board-friendly box offers the wide range of control and MIDI functionality of a much larger pedal. 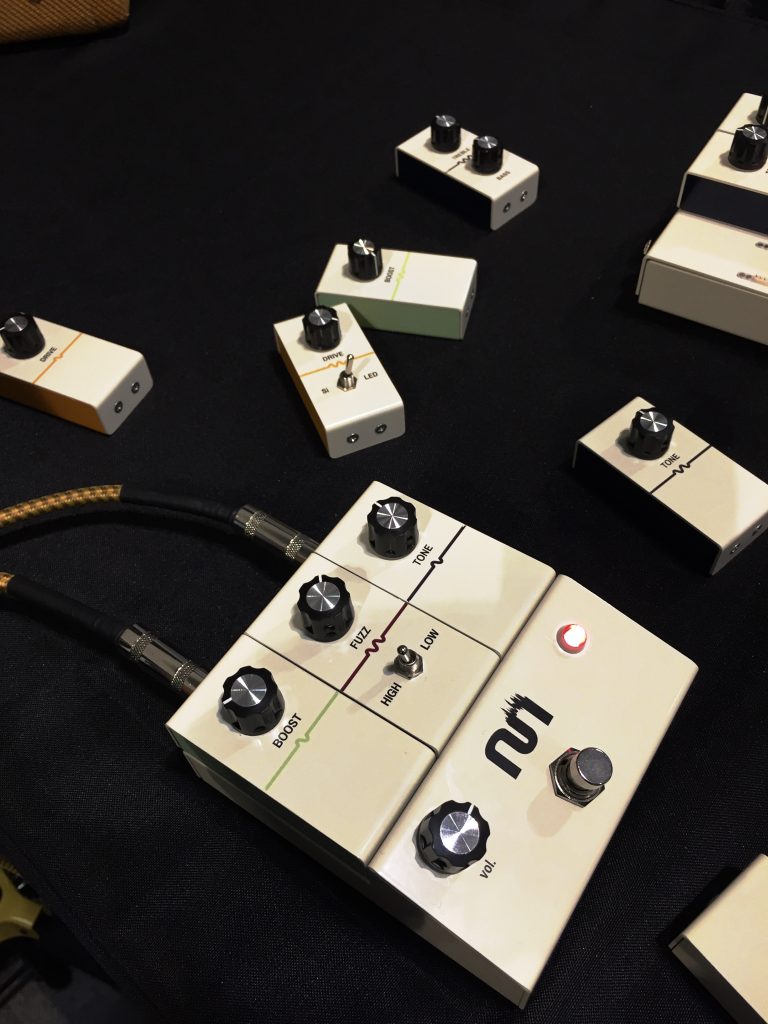 Reese picks up where the Eau Claire Thunder left off, being brighter and dirtier. The Timewarp toggle connects or disconnects a clipping diode for some octave-up artifacts. Toneblast bypasses the tone control, for more volume and more timbral changes. 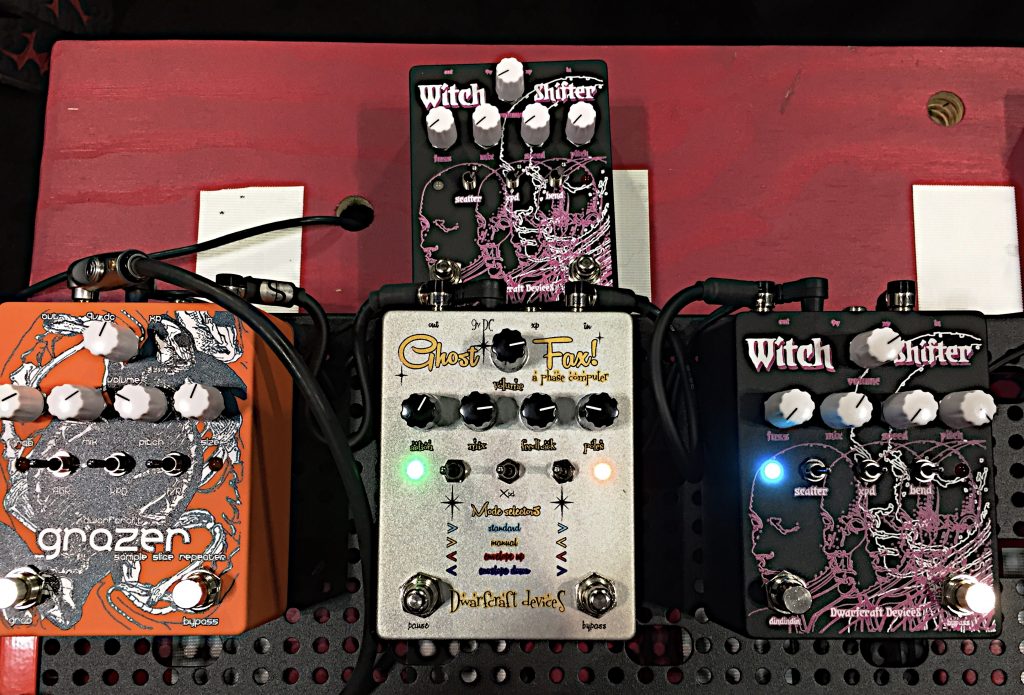 The Witch Shifter shifts pitches from one octave down to one octave up. A the Doppler effect and the pitch jumping from the Wizard of Pitch are included, as is a “Scatter” toggle that turns the pitch knob into a chaotic modulator for machine noises and tape warbles. The “DinDin” stomp freezes the audio buffer for glitched out repeats. A secret menu controls a delay circuit. The Witch Shifter offers smooth and clean pitch shift, unless you turn up the on-board fuzz. 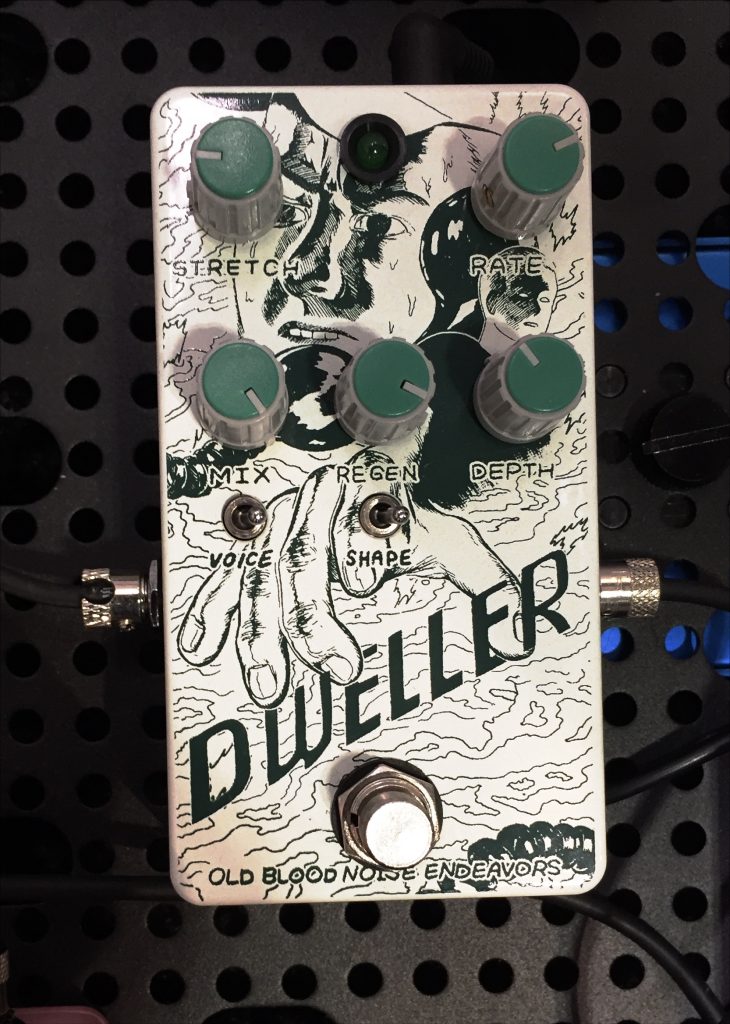 OBNE has come up with some new twists on one of the first effects offered to guitarists back in the Seventies. In addition to the usual controls, an innovative Stretch control changes delay time inside each phaser stage. Check out the video to hear some of the novel effects this produces, as well as how you can turn the pedal from a phaser to a basic delay 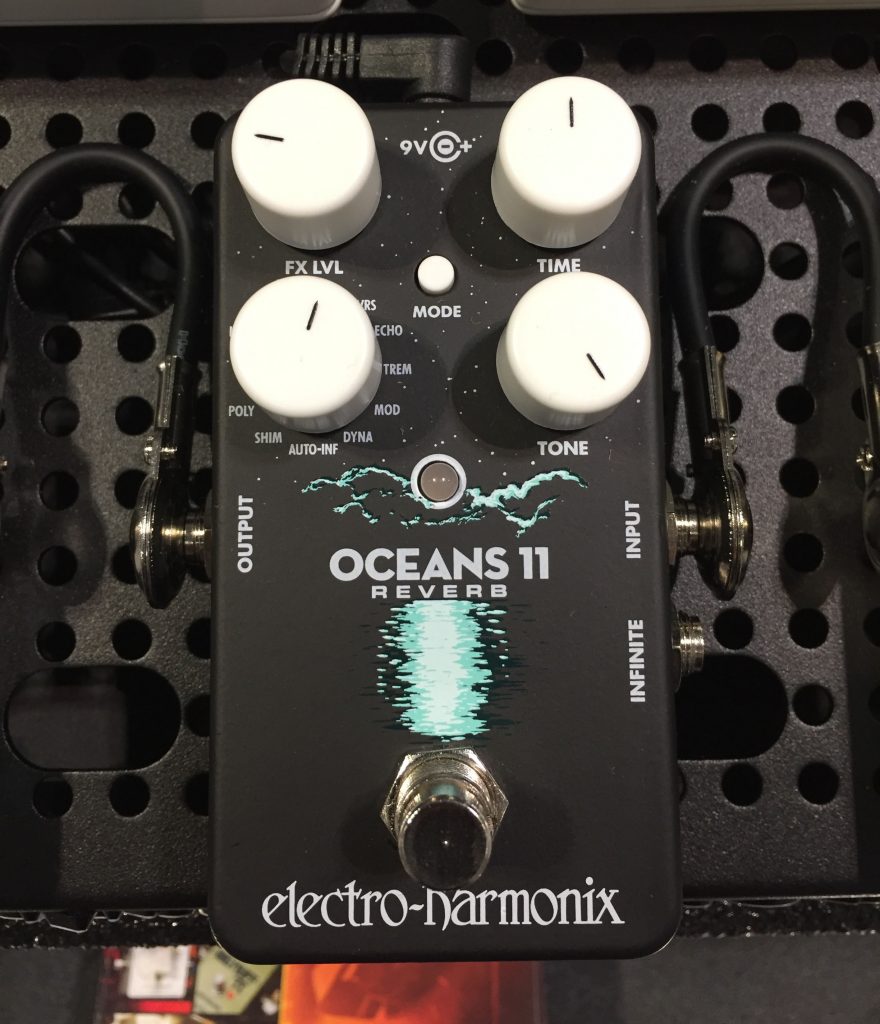 Oceans 11 offers EHX’s take on the typical hall, spring, plate, gated, and reverse settings, as well as the now common shimmer, echo, and tremolo options. They veer off, however, with settings like a modulated reverb that offers three modes: chorus, flanger, and a combo of the two; a ducking reverb; an auto volume swell setting; an auto-infinite reverb that triggers a wash for each note or chord and then crossfades to the next one; and a polyphonic reverb, with two configurable bi-directional pitch shifts operating on the pre-reverb signal. The Oceans 11 also features “hidden” parameters accessible thru its Secondary Knob Mode. 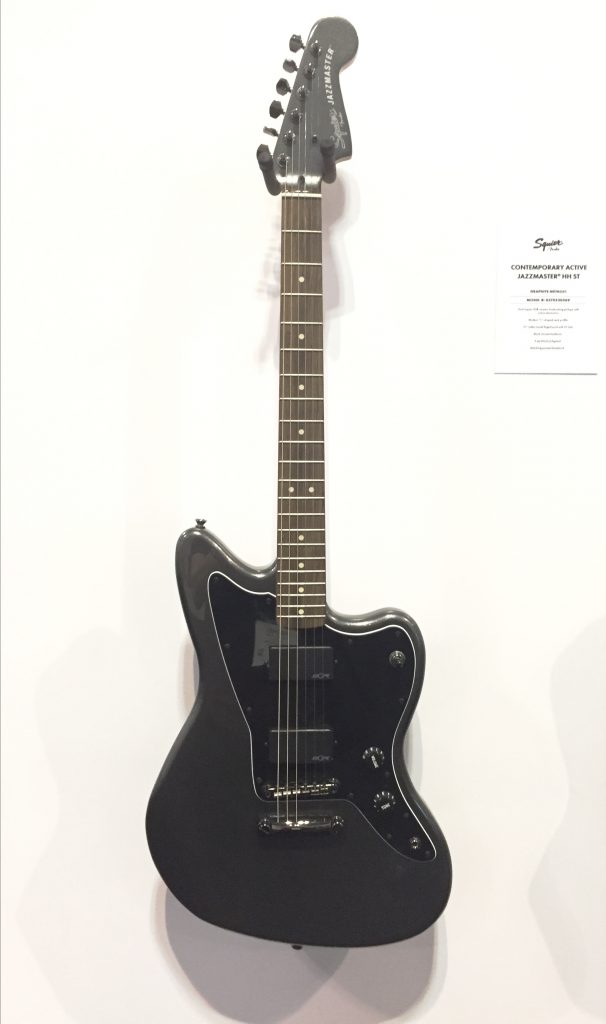 This baby looks as modern as a stealth bomber. Powered by an active 9-volt circuit, the dual SQR ceramic humbucking pickups produce high-output tone. It features a “C”-shape neck and stopbar tailpiece. All at the usual Squier ultra-economical price point. 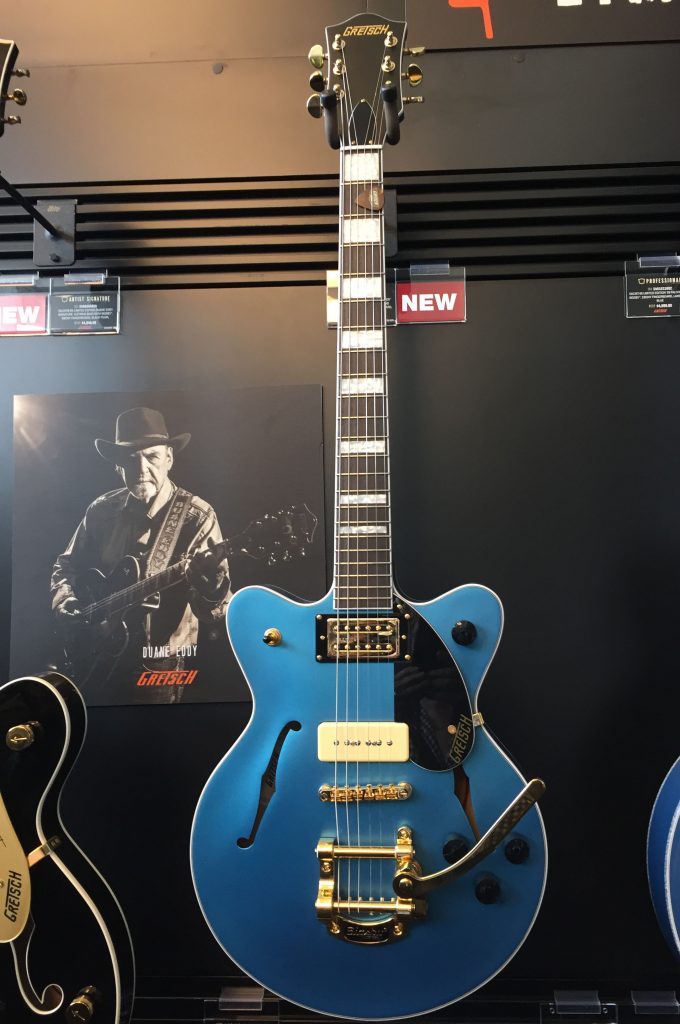 The smaller bodied Riviera Blue Satin finish (G2655TG-P90) Limited Edition Streamliner Center Block Jr. P90 with Bigsby and Gold Hardware (boy, is that a mouthful) offers a contemporary update on the Gretsch style. It sports a Broad’Tron neck pickup and a P90 bridge pickup. The lightweight spruce center block runs the length of the body, reinforcing the top while eliminating undesired feedback for volume-friendly performance on modern stages. Brian Nutter’s instruments define their own sci-fi look and offer the kitchen sink in tonal possibilities, including various electronically out-of-phase pickup combos that are surprisingly usable. I have since reviewed this model for Guitar Player and found its Starship controls easier to manipulate than you might think. 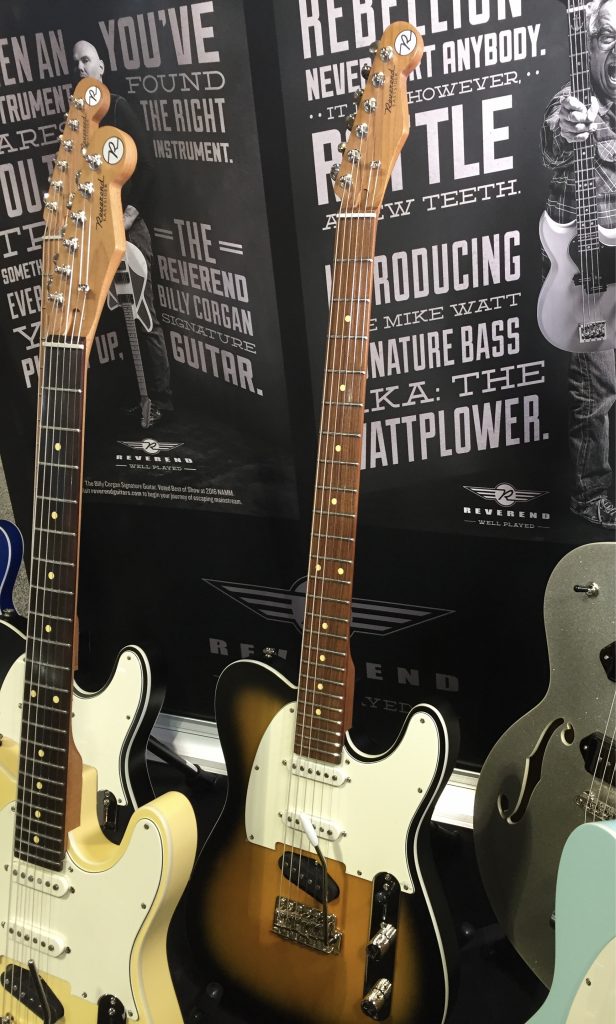 There were lots of amps, but nothing groundbreaking that I saw. 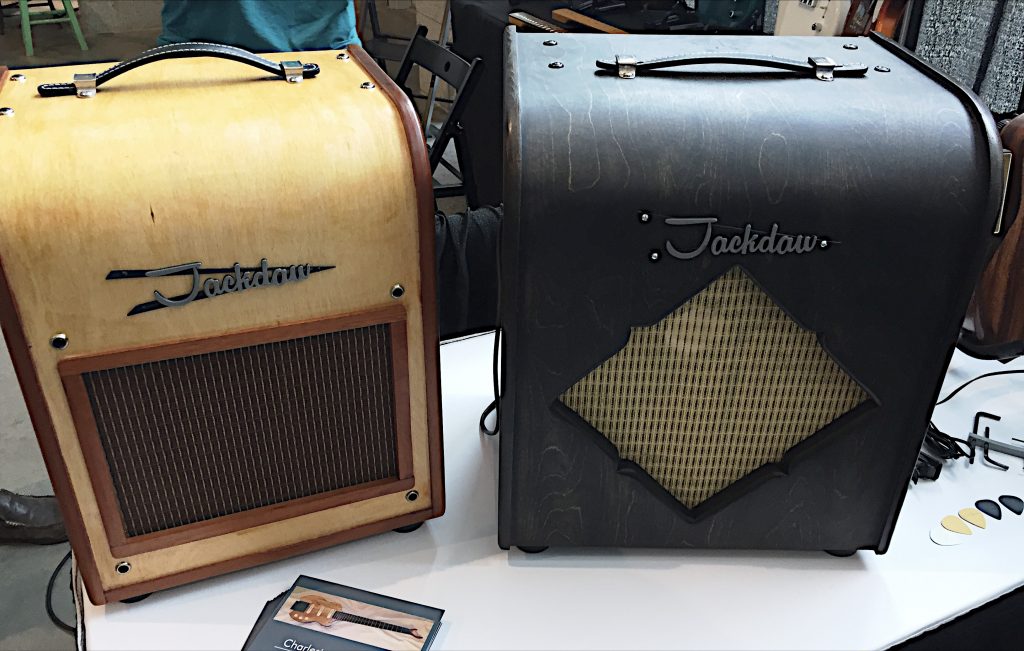 Not modern and, from the evidence of their website, not even available yet, but really cool looking. They do make more modern looking ones. 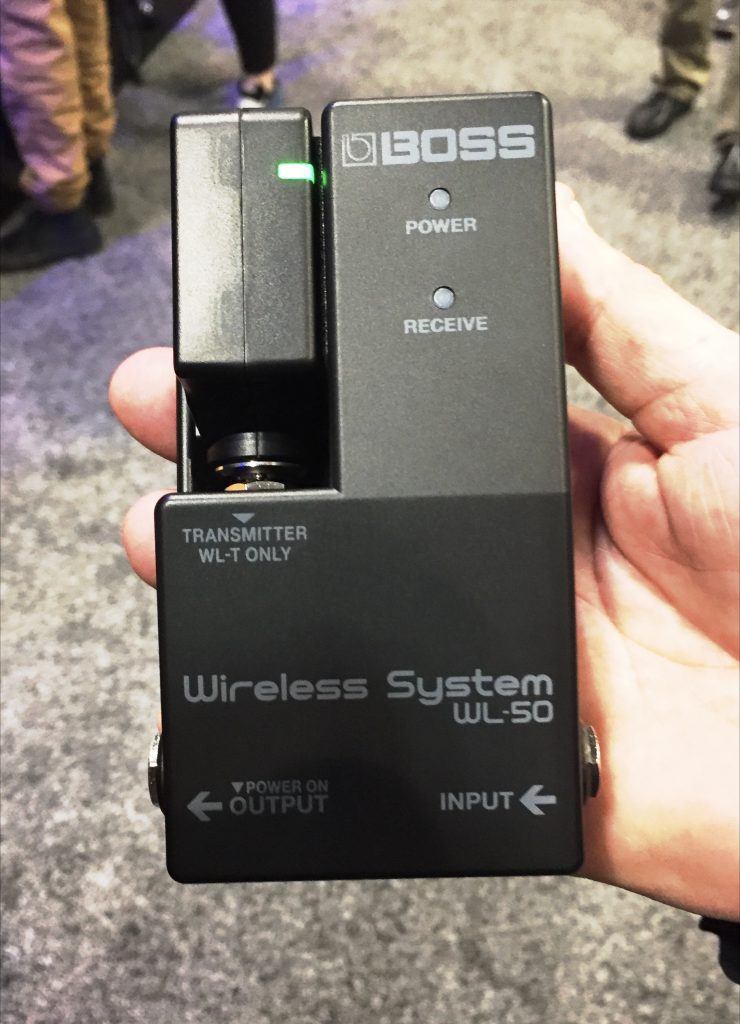 This new wireless proffers a fresh take on cable-free performance. Driven by new BOSS technology, the WL-50 eliminates some hassles associated with wireless systems. The stompbox-sized receiver fits alongside other pedals. It includes a docking port for charging the transmitter and automatically setting the best wireless connection. There’s a DC output that allows you to distribute power other pedals. The receiver runs on a carrier frequency of 2.4 GHz. It offers up to14 channels and has a range of 65 feet line-of-sight. (both specs may vary due to local conditions). Latency is 2.3 ms; dynamic range is 110 dB or greater; and the frequency response is 20 Hz-20 kHz. The WL-50 has a control to emulate cable tone that you can set to off, short, or long. 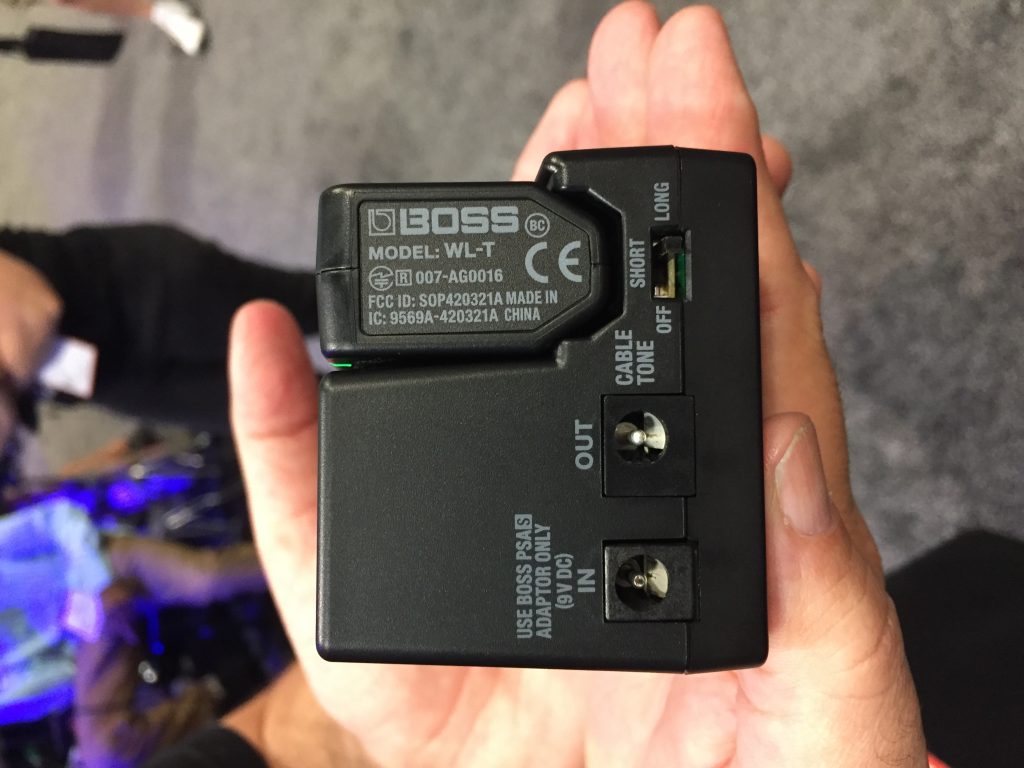 There are two other models: the WL-20, with a small receiver that plugs into your board and the WL-20L, just like the 20, but without cable simulation. The 20s both charge through USB. 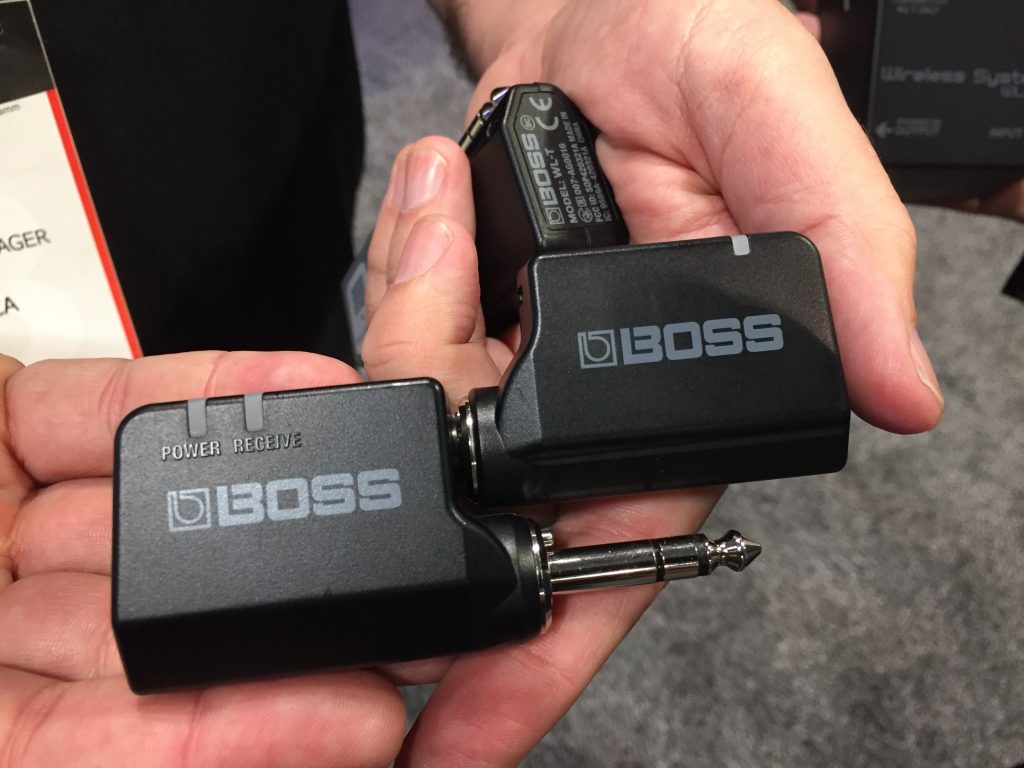 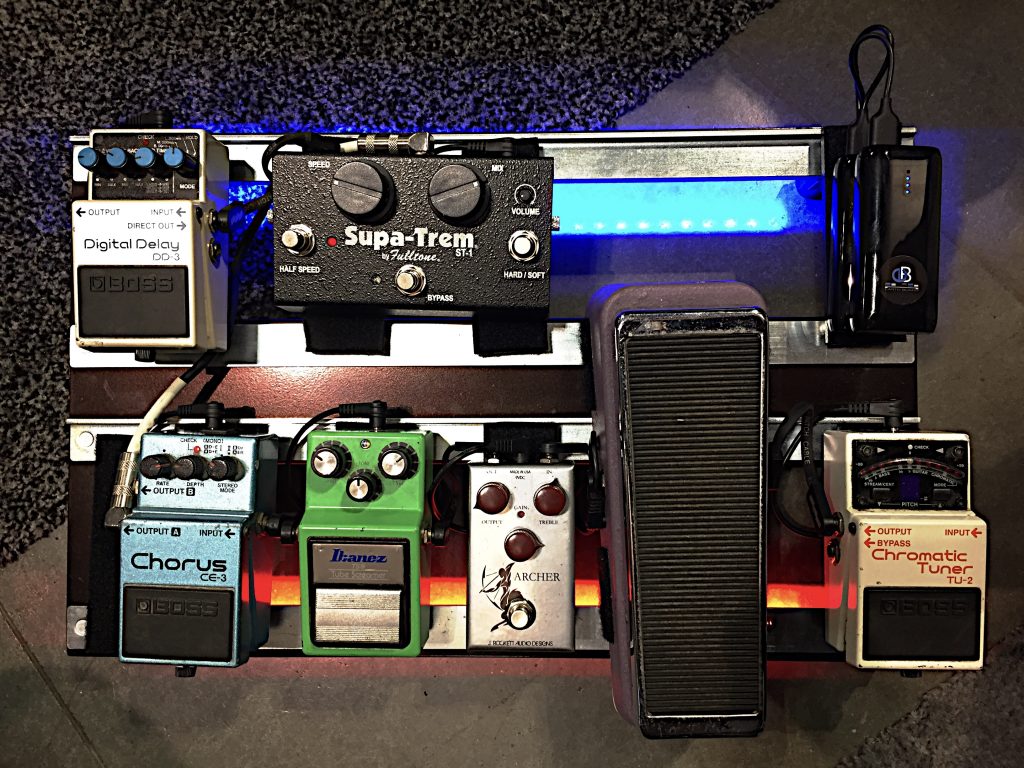 A pedalboard that powers your stomp boxes through magnetism is an interesting concept (it remains a concept, as it is not yet available). I will let these guys explain it. 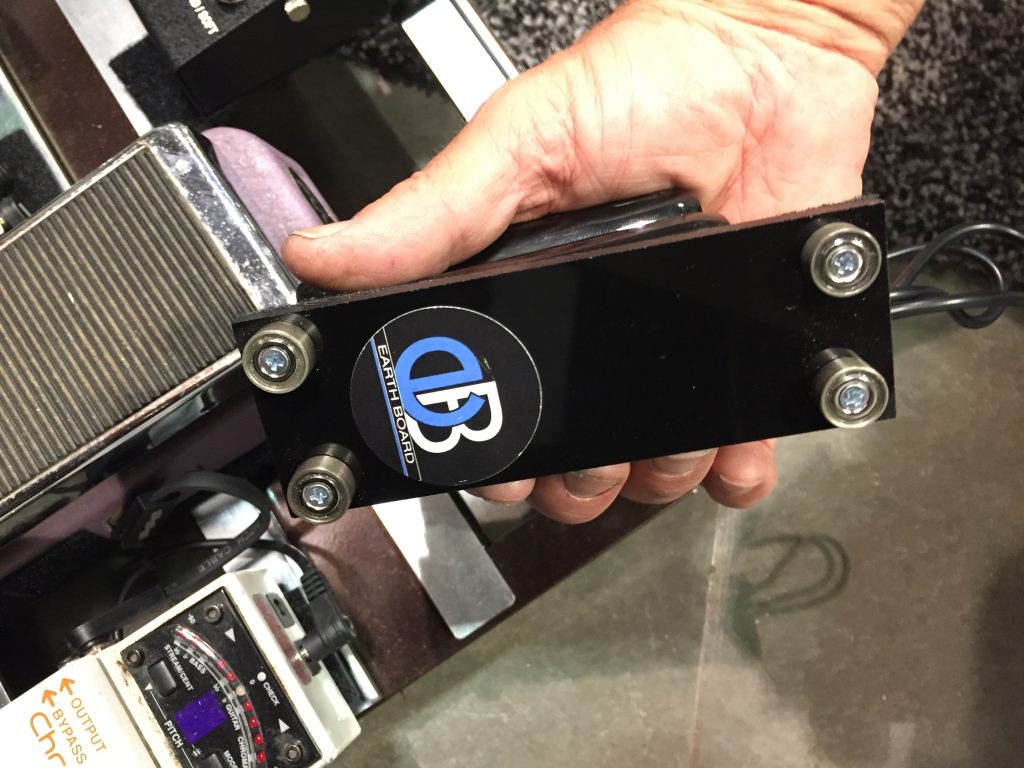 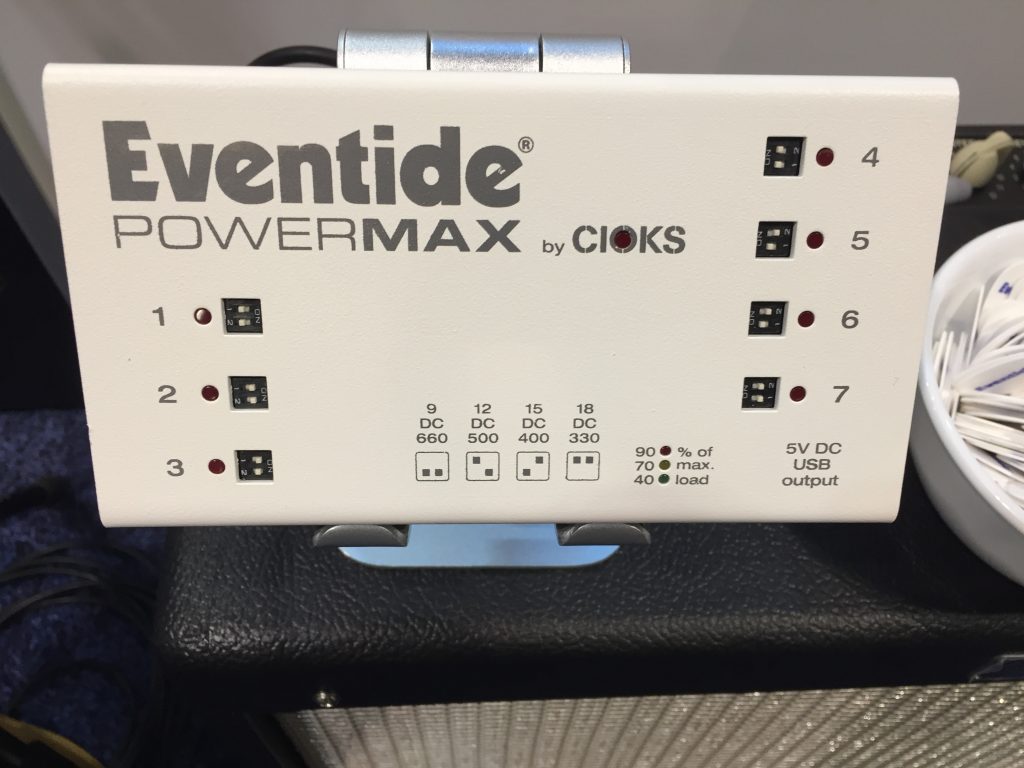 While we are on the subject of powering pedals, Eventide was showing their new PowerMax power supply. Capable of running seven H-9s, the PowerMax can charge your smartphone or tablet at the same time. It comes in at less than half the weight and size of its predecessor, the PowerFactor 2, and has 44% more power. This was made possible by pairing with power supply veterans CIOK, who provided their compact SMPS technology. PowerMax delivers 38.4 watts of power. Each outlet is switchable to 9, 12, 15 or 18V, and it works worldwide (85-265V). There is  660mA @ 9V available on all seven outputs, which means you could daisy chain multiple low-draw pedals off of one output; LED monitoring of each outlet; all in a low profile box (1 inch thick). 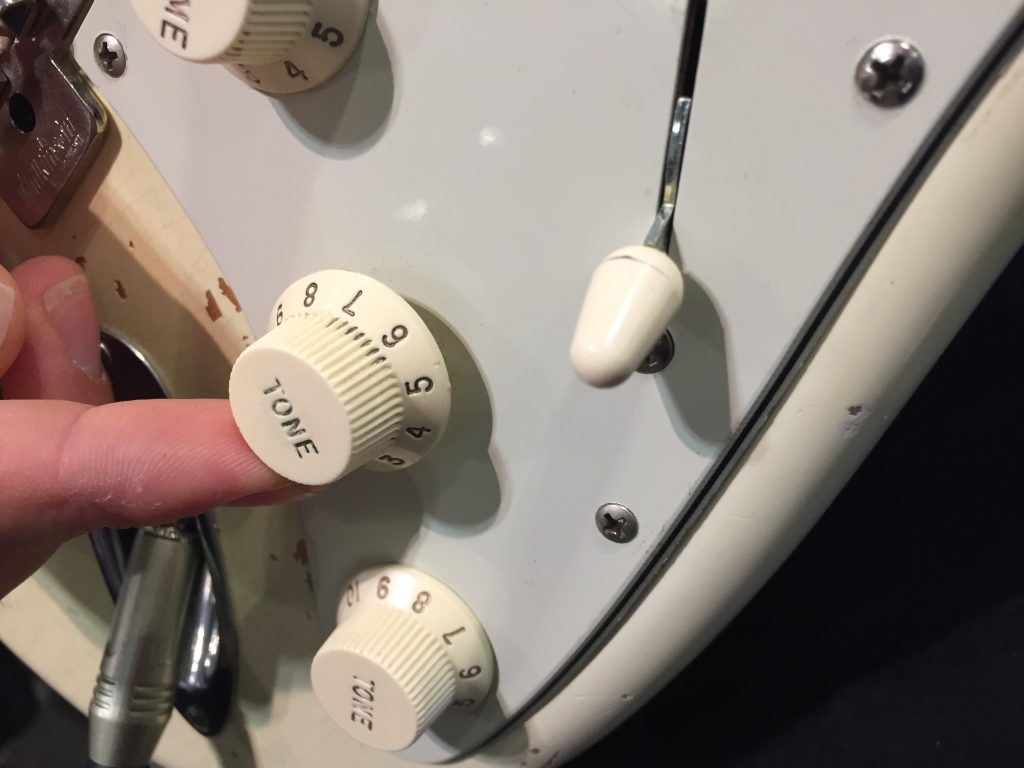 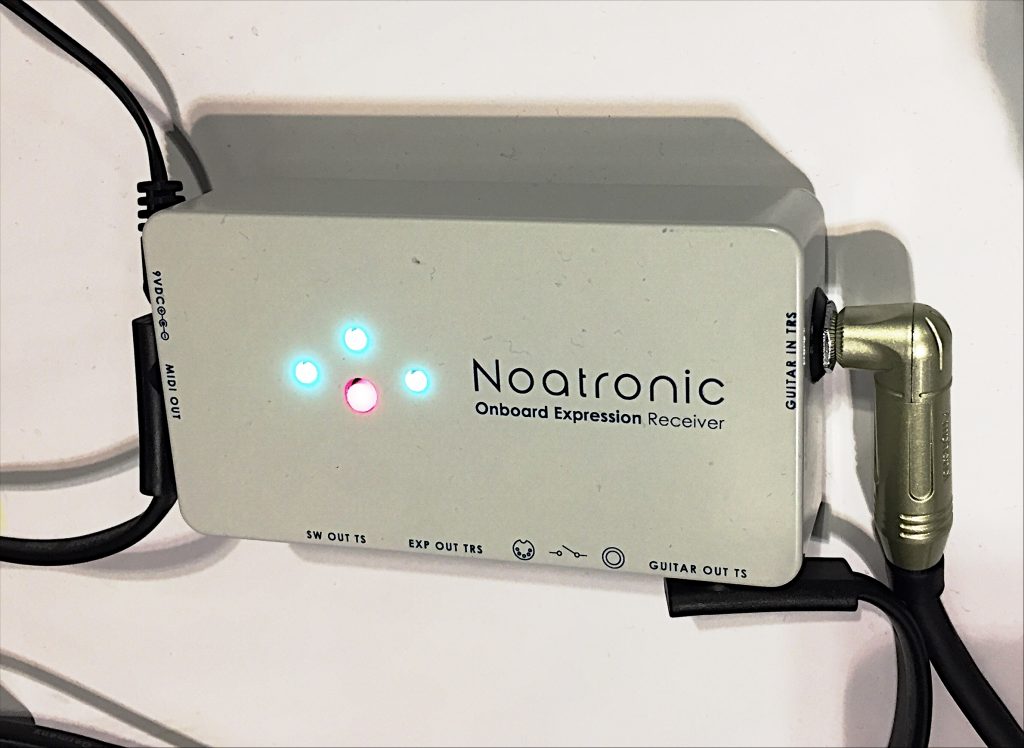 From Denmark comes the Noatronic Onboard Expression to bring expression, MIDI, and effect switching control onto the guitar. The system consists of a controller pot, which replaces an existing pot in your guitar, and a receiver, which transmits the control signal and the audio through one stereo (TRS) cable. No batteries are required. The receiver can modify devices such as Fractal Audio Axe-FX II and AX8, Line-6 Helix Floor, Mission Engineering Expressionator, and Kemper. Like other such ideas, it trades freedom from having to be near your foot controllers, for having to interrupt your picking hand’s playing function to deal with switching or control function. Currently relegated to a concept, we will see if it gets past the vaporware stage. 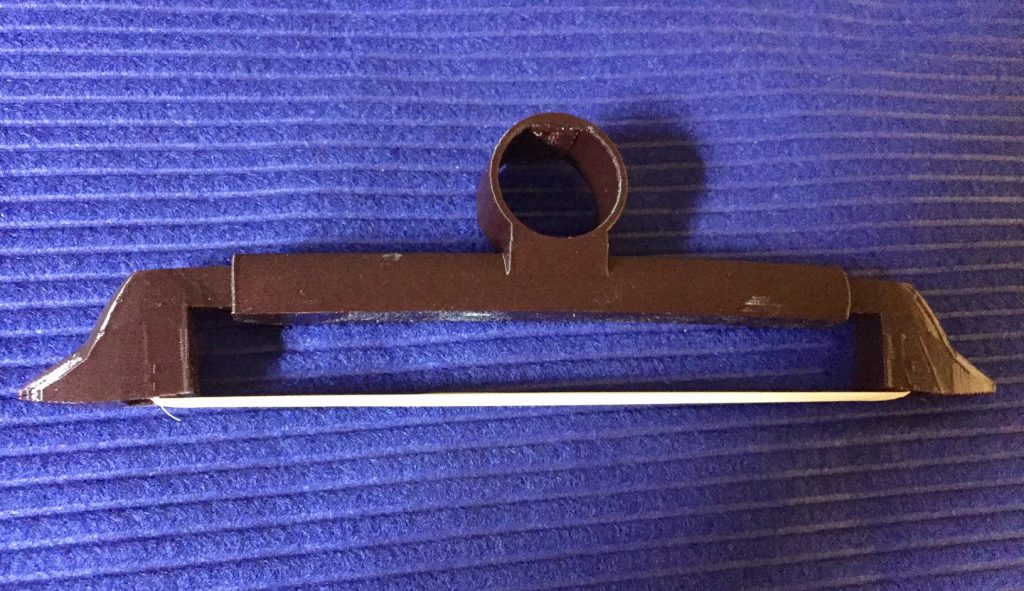 Ever since Jimmy Page appeared on stage with the Yardbirds wielding a violin bow on his Telecaster, more adventurous guitarists have been bowing on their instruments in search of that same haunting sound. Marketed for fiddlers, this might intrigue guitarists as well.

Guitar Moderne was conceived as a curating site, and, though I provide original interviews and reviews, I am not able to bring multiple video crews to the show. I have instead brought together some of the best videos of the products I feel are most interesting to the modern guitarist. As always, for lots more traditional gear coverage please visit the channels of the people whose videos I posted.