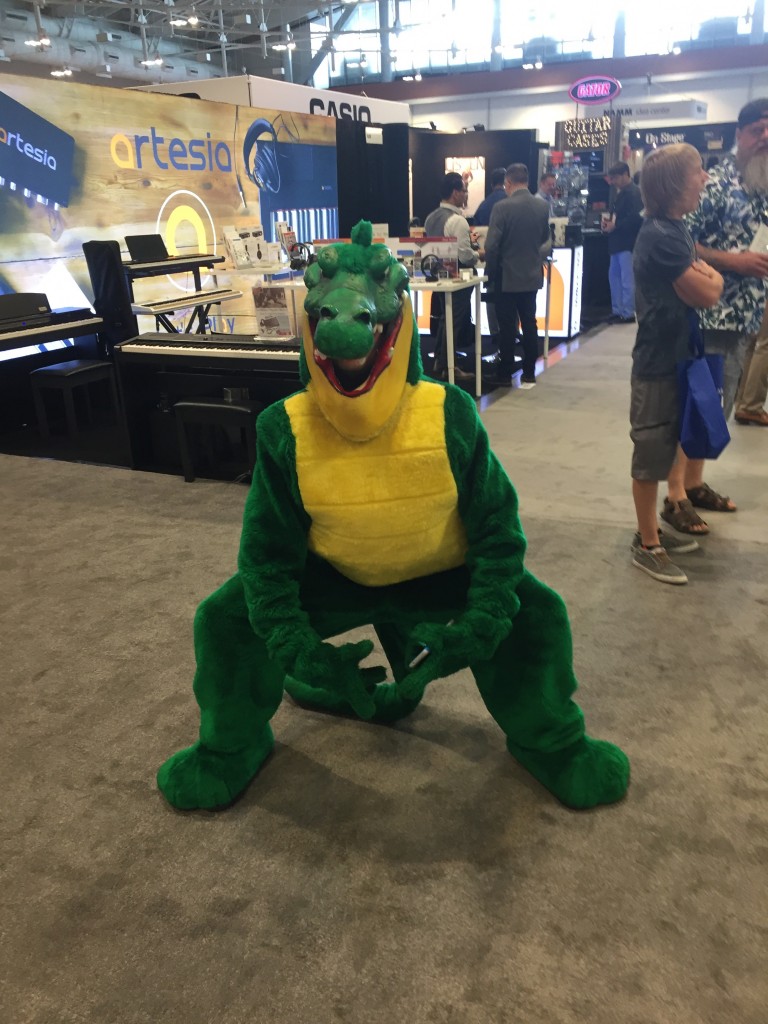 Radiohead’s Ed O’Brien is a quintessential modern guitarist, so his collaboration with Fender on a signature instrument is big news. Even bigger news, though, is that this Stratocaster comes with a built in Fernandes Sustainer, Seymour Duncan JB bridge and Texas Special middle, for about $1000 in the stores. Just having a Sustainer installed in your Strat could cost almost that much. 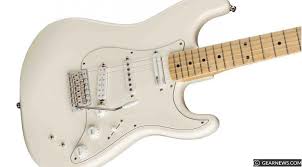 Commercial acoustic guitars lag behind electrics in the exploration of modern shapes and materials so it was good to see these futuristic designs from Composite Acoustics, now under the Peavey company umbrella. 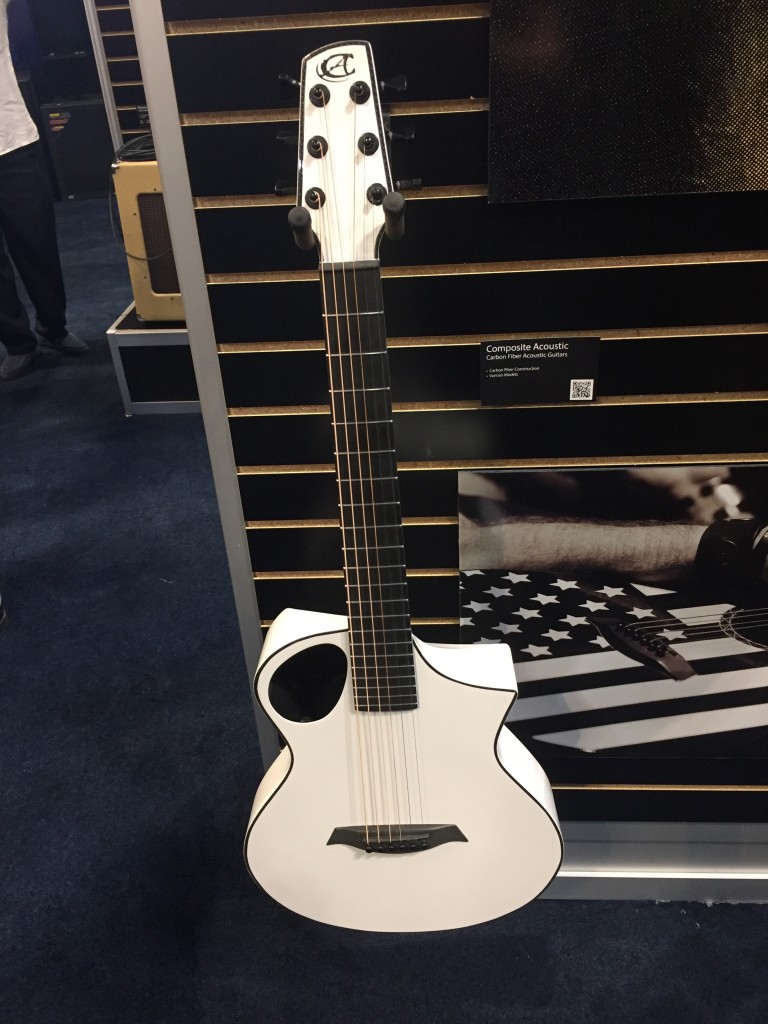 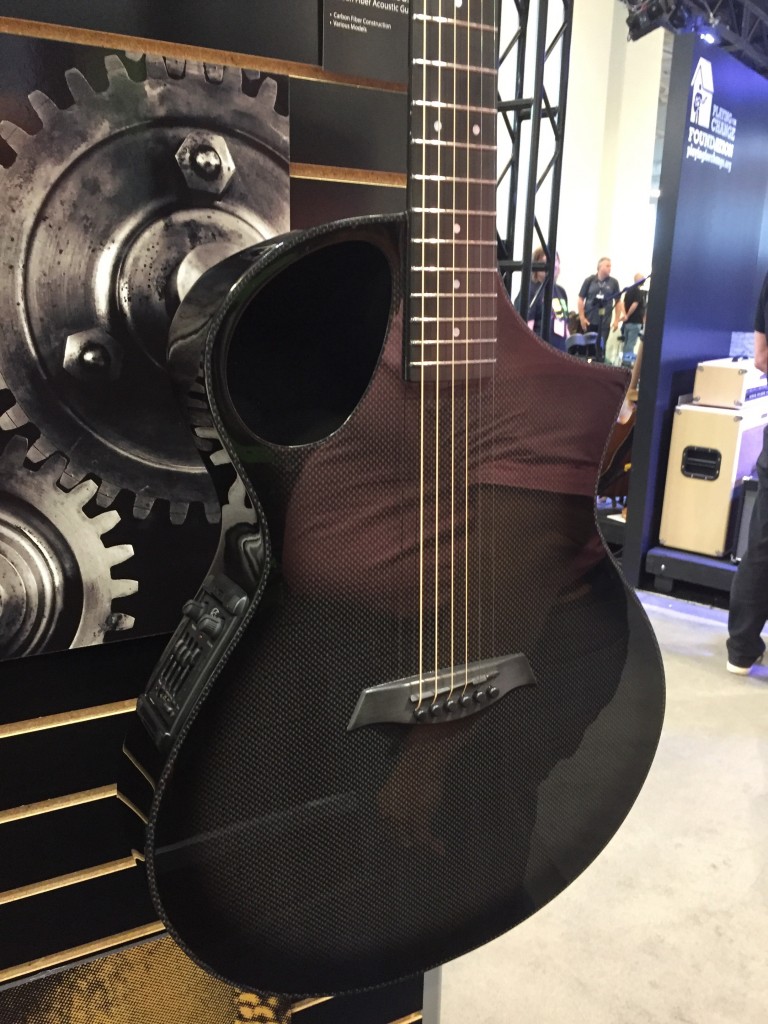 These Raulo acoustic guitars combine forward thinking design with traditional wood used for construction of both the instrument and the removable sound hole cover. 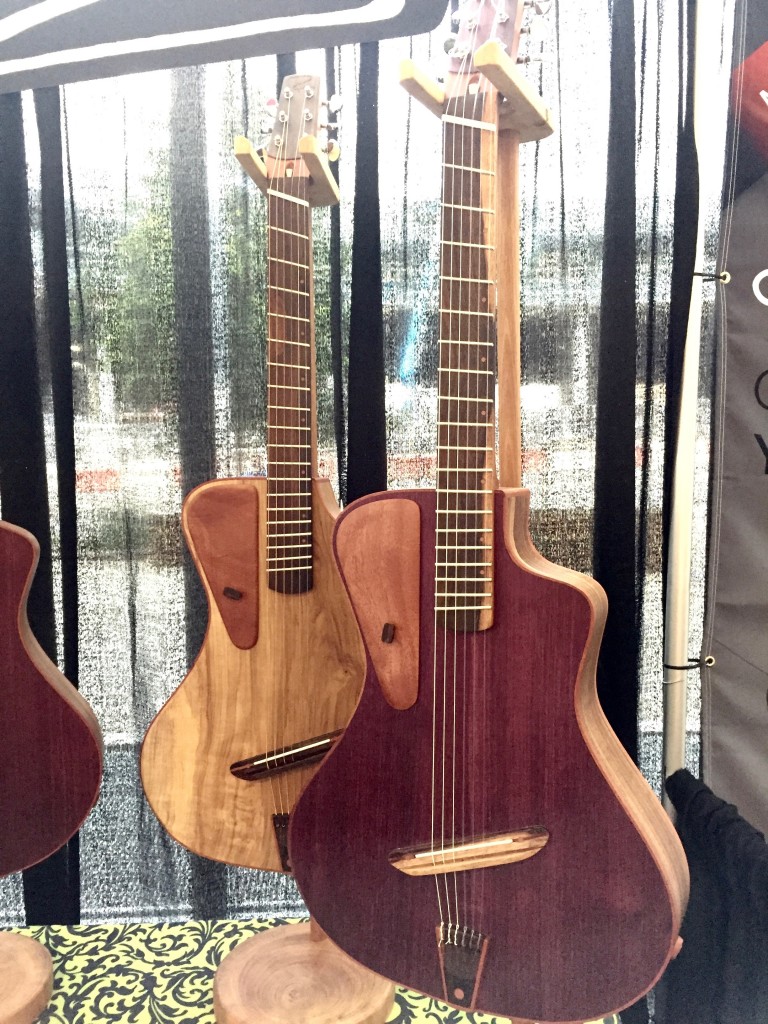 Reeves Gabrels has defined modern guitar in his work with David Bowie, Bill Nelson, and The Cure, as well as on his own recordings. He deserves as many signature guitar models as Reverend is willing to manufacture. The new one is the Reeves Gabrels Dirtbike. The company matched the light metallic blue color of both Gabrels’ 1966 Schwinn Stingray and his 1971 Honda dirtbike. 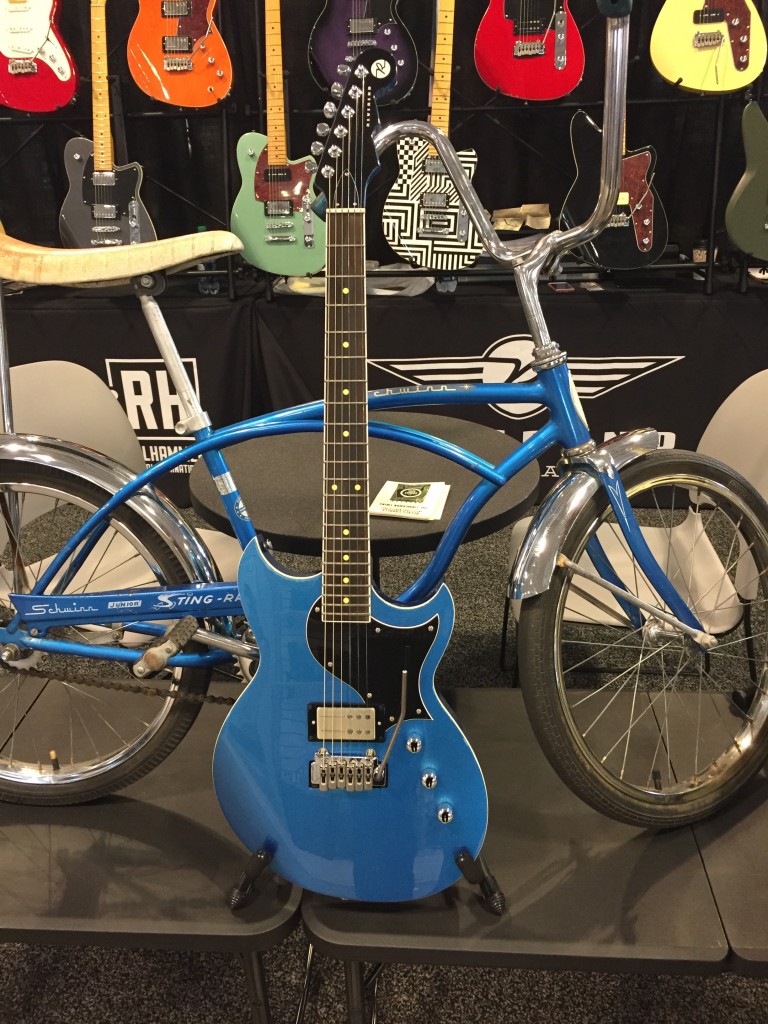 I got to play a couple of these new Epiphone Les Paul SLs and they felt pretty darn good. They have a poplar body, maple neck, rosewood fretboard, and two single-coil pickups. At $99 street they are ripe for all sorts of modern mods and experimentation. 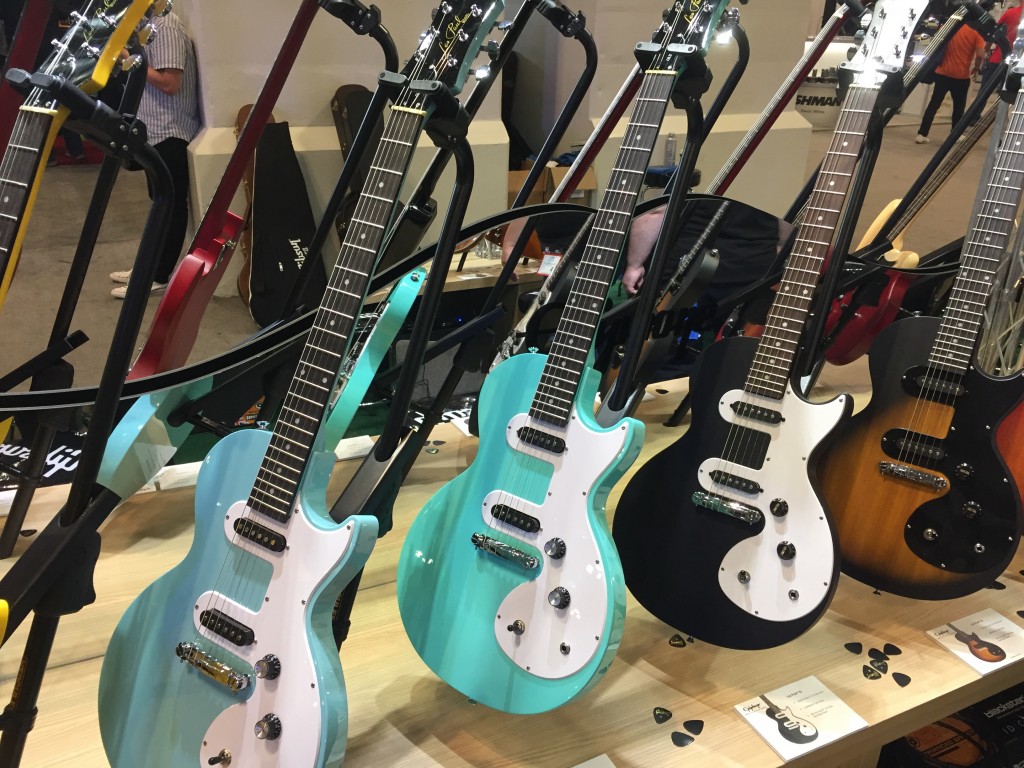 This Nutter Guitars Astro has a cool back-to-the-future vibe and offers real electronic phasing option for the pickup combinations. 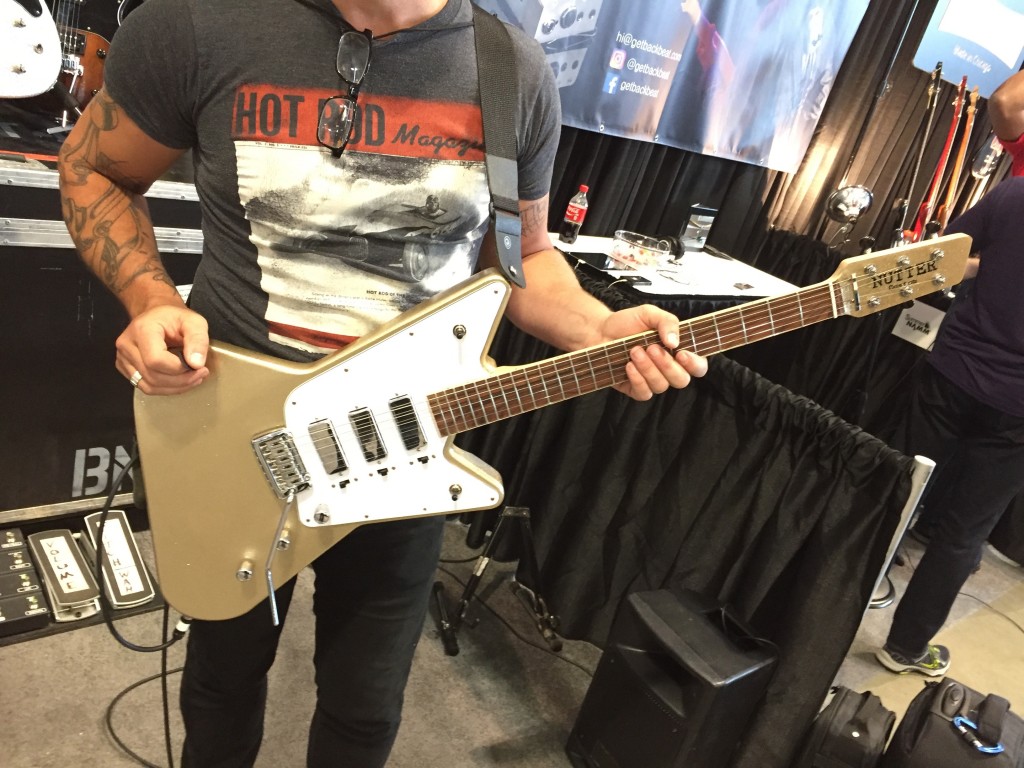 Chris Swope unveiled a model that references the currently madly popular Jazzmaster without overtly aping it. It also plays better than any Jazzmaster in existence, and most other guitars as well. His guitars sound like no other, which is perfect for the modern guitarist trying to forge a new instrumental voice.

You will need an amp for your $99 Epiphone, so you might want to check out the $99 Boss Katana-Mini battery powered combo. Close your eyes watching these demos and you will think you are hearing a much larger amp.

If you are okay with spending up to 23 times that, the Creation amps sported a modern-retro look, but more importantly they sounded terrific.

In keeping with the current trend, effects pedals were rampant. 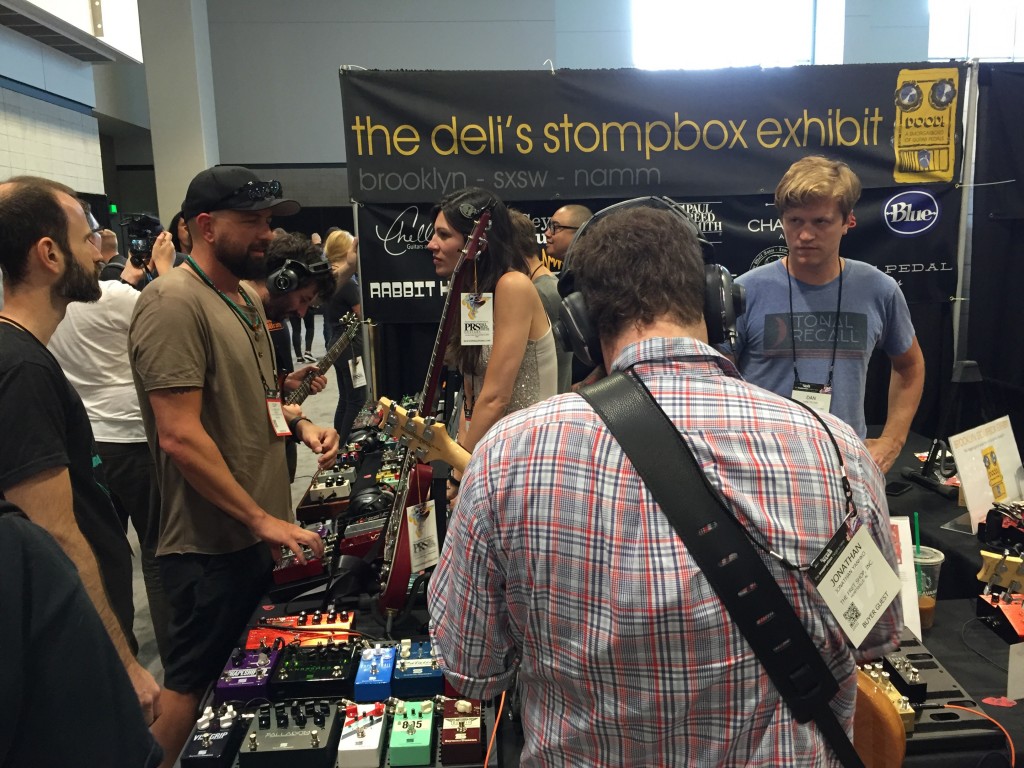 That said, the large majority of them were variations on a traditional theme: fuzz pedals, overdrives, delays, chorus pedals, compressors, reverbs, etc. But, a couple offered some new twists for the modern guitarist.

The Guitar Moderne Best In Show prize goes to the Syntax Error from Alexander, which recalls the lo-fi era of early video games and dial-up modems. It can store four programs with the footswitch, responds to MIDI, and can be edited with a template for the Touch OSC iPad app.

Edging in just behind the Syntax Error as a top pedal for modern guitarists would be the Pigtronix Mothership 2 synth pedal, which crams all the features of the original Mothership into a much smaller footprint.

I missed the new Headrush pedalboard at Winter NAMM. Based on the Eleven rack modeler, it appears to be going, you will pardon the expression, “head-to-head” with the Line 6 Helix. Someone will no doubt do a shootout at some point, but the immediate difference is that Headrush uses a large onboard touchscreen for programing as well as allowing hands free programing similar to the Helix. It also offers a Hybrid option that lets you have patch selection and individual stomp box on/off modes available simultaneously.

There aren’t enough small footprint delay/reverb combo pedals out there (Earthquaker’s Dispatch Master is the only one I know of) so the Wampler Ethereal pedal is a welcome addition to the world of guitar ambience. 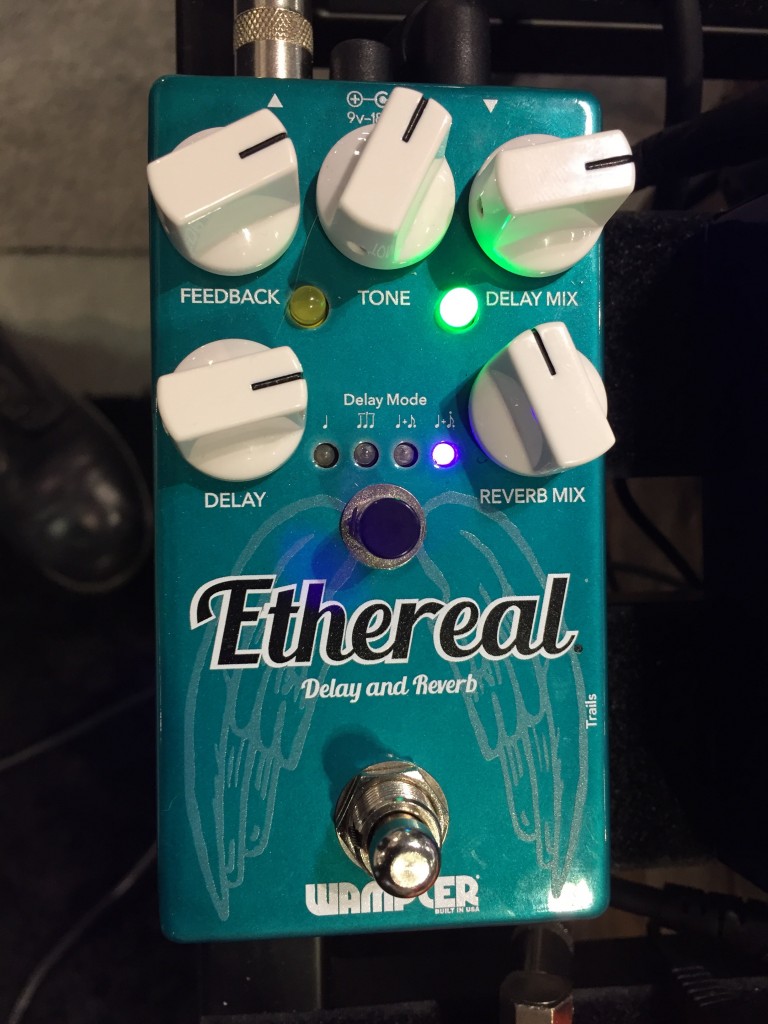 For hardcore collectors, Boss offered a boxed set of the first three compact pedals they offered. Only $899 gets you’re the set, but act quickly as supply is limited. 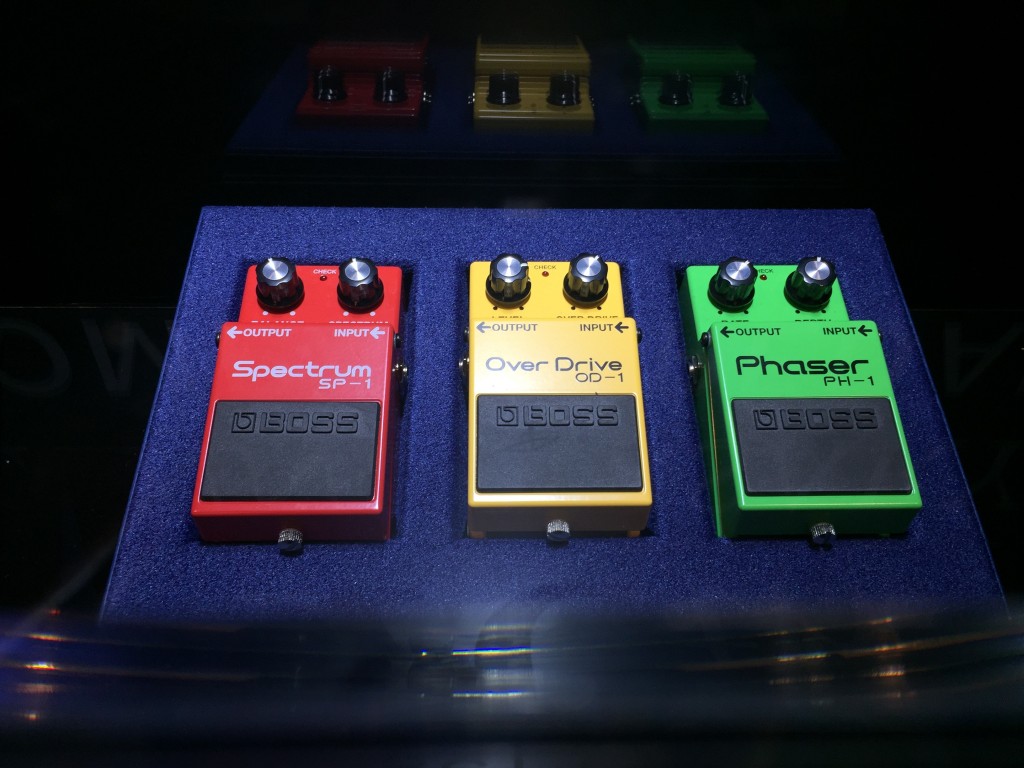 Those more into playing than collecting, will be interested that Boss added the MD500 modulation and RV500 reverb pedals to the DD-500 delay pedal version. Along with the Source Audio Nemesis delay, and soon their Ventris reverb, these pedals provide some much needed competition in the market that Strymon has heretofore cornered. 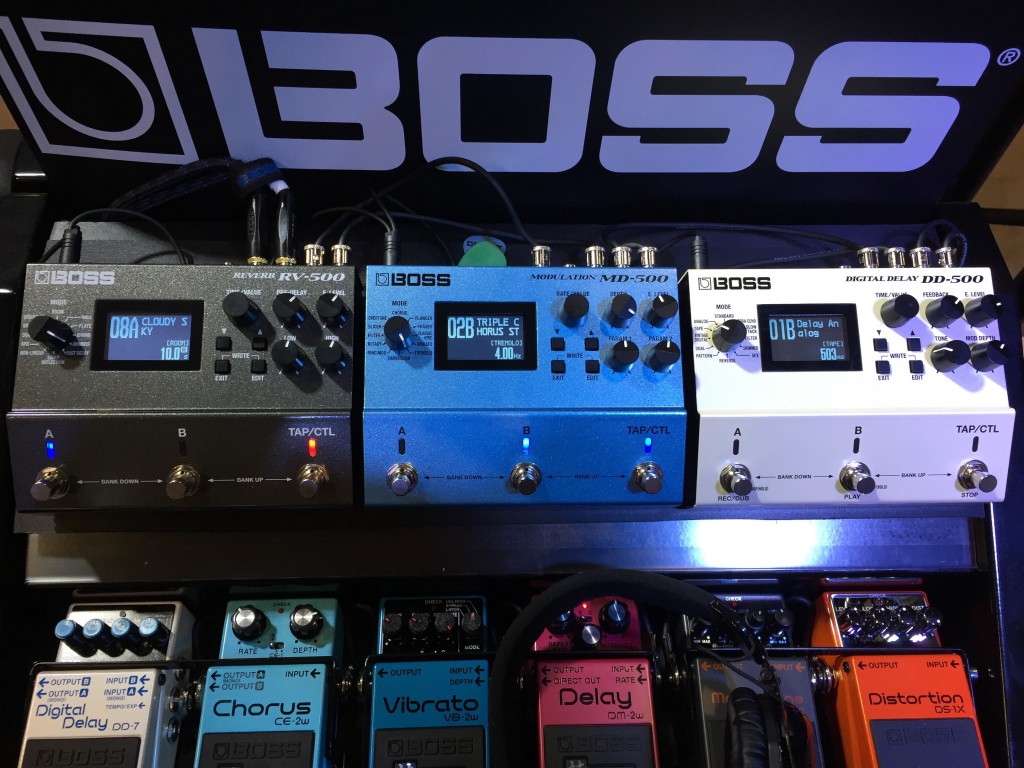 Digitech’s Trio pedals offer an amazing backing band for practice or performance, but they restrict you to preset grooves. The new Sdrum pedal  lets you create your own grooves by merely strumming your strings.

The Dunlop Carbon Copy is the best sounding analog delay I have heard, and the Deluxe version doubles the fun with extended delay time, tap tempo, and a switch to toggle between the warm sound of the original pedal and vibrant sound of the Bright version. 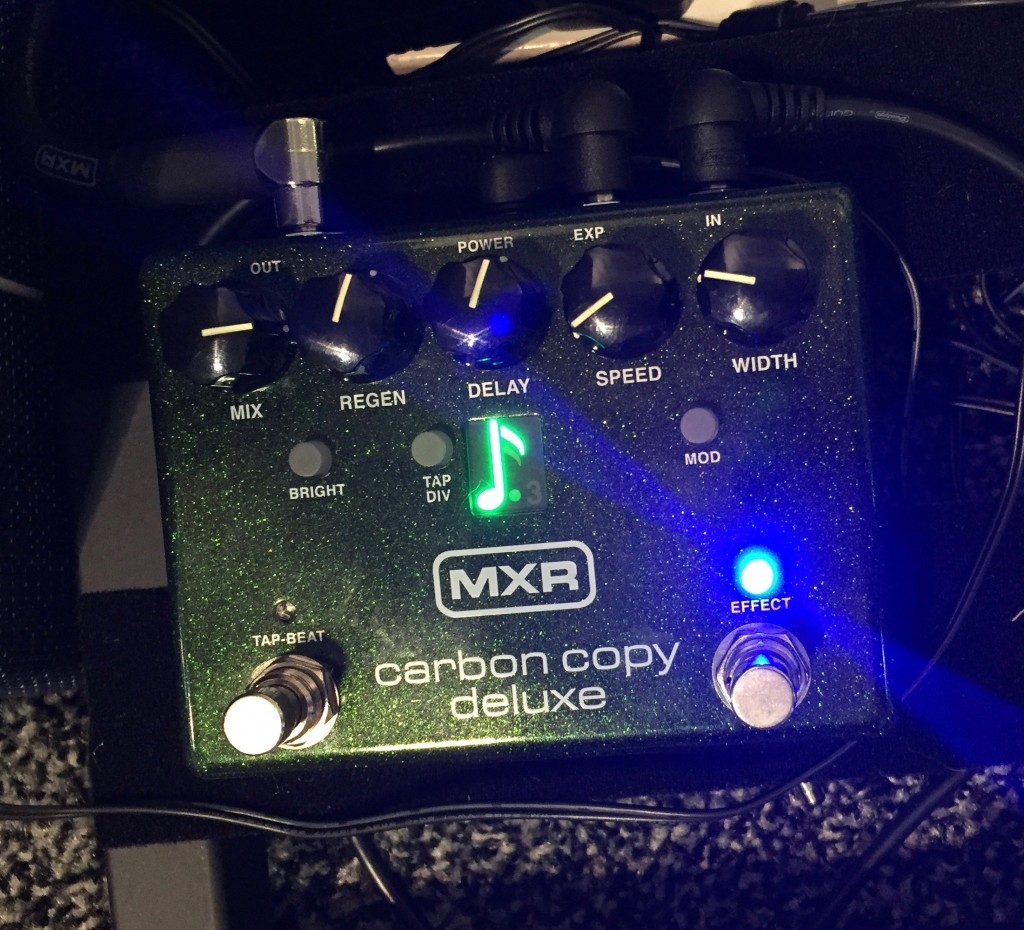 The Artiphon instrument is finally available and I have one for review. It can be played somewhat like a guitar, reducing the learning curve, and offers interesting MIDI control options—more impressions to come. 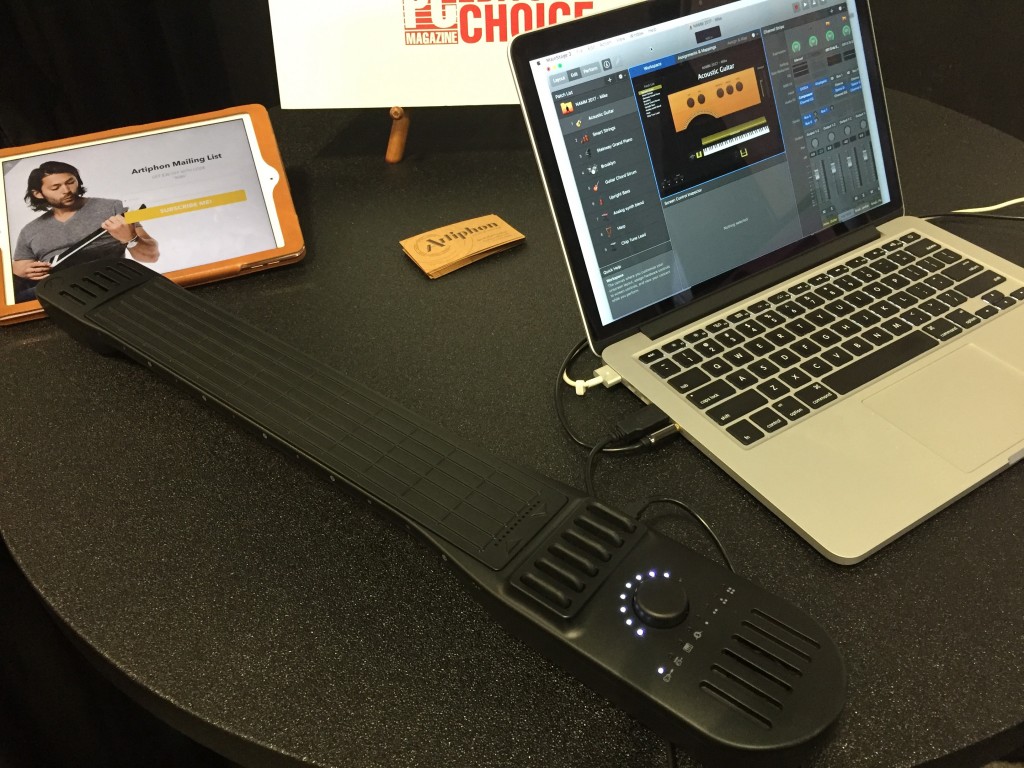 Line 6 was demoing their newly released Helix Native, which offers a few new twists on the theme of amp and effects modeling software.

Temple Audio pedal boards offer a modular rack style interface that makes connectivity options easily interchangeable. These Mini and Micro modules can be installed in either side of your board and you do not have to be a professional to do it. 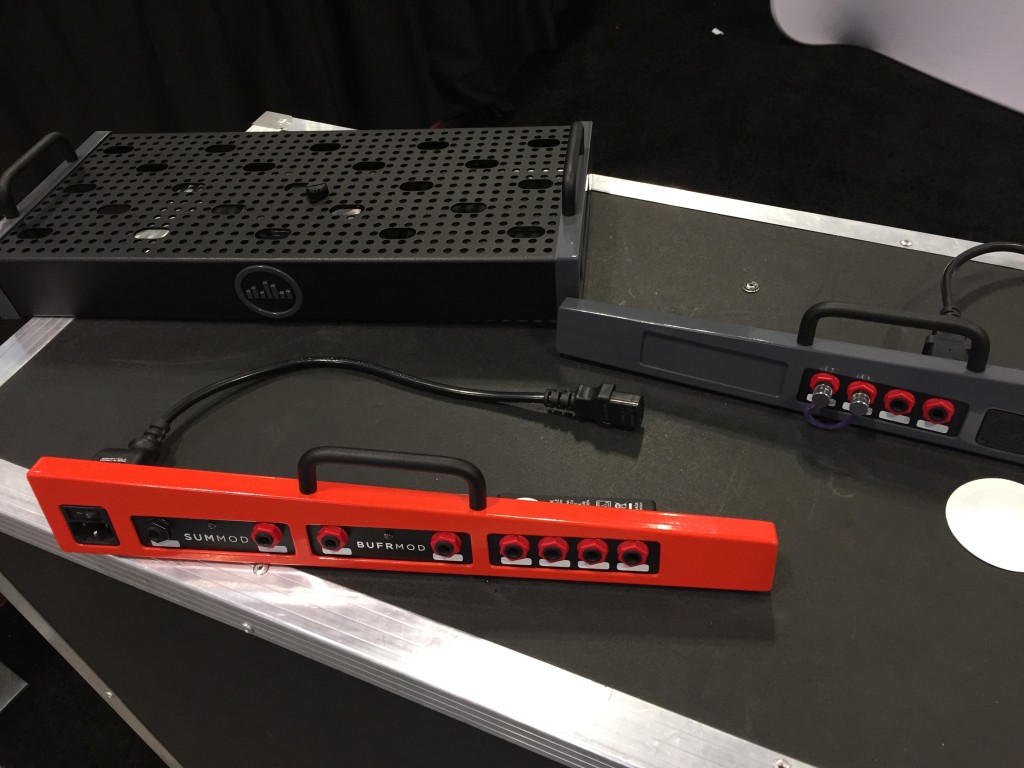 The UA OX Amp Top Box is an analog reactive load box for tube guitar amps. It features five guitar amp attenuation levels; a front-panel “Rig” control for immediate control over  mic and speaker cabinet emulations. The Box also offers built-in Universal Audio EQ, compression, delay, and reverb effects; selectable 4, 8, and 16-ohm operation; front-panel headphone out; balanced TRS line outs, and S/PDIF digital outs for recording. It can be paired with the OX mobile or desktop app over Wi-Fi for editing and saving presets. I had a chance to check it out through headphones and was uber impressed. 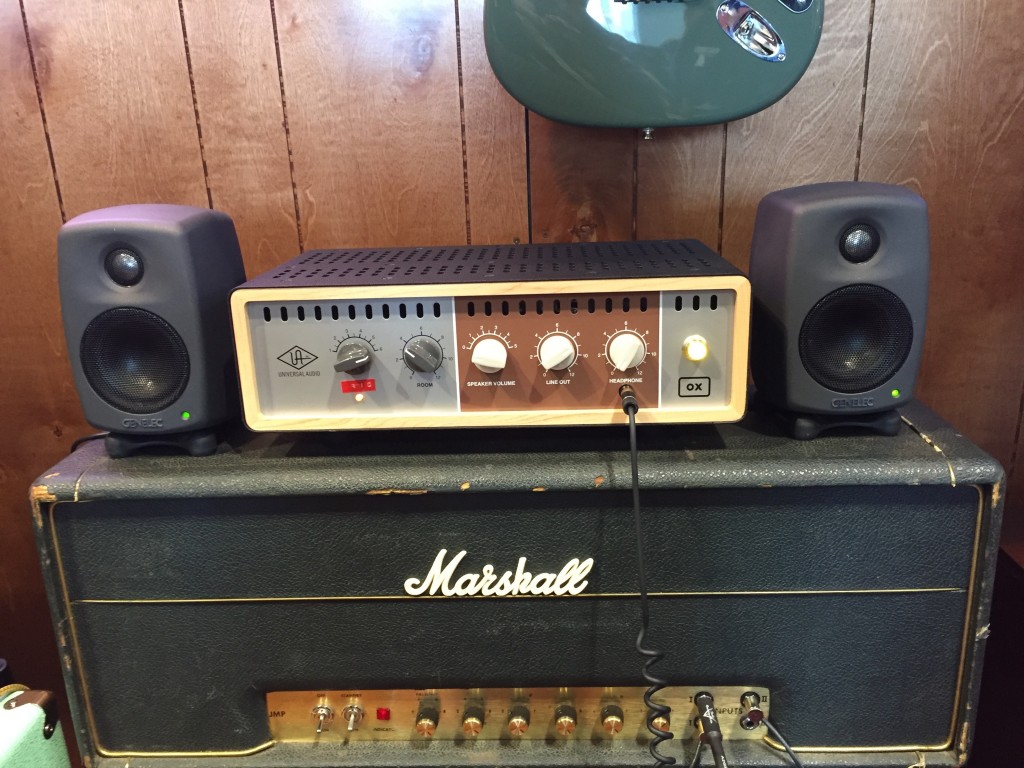 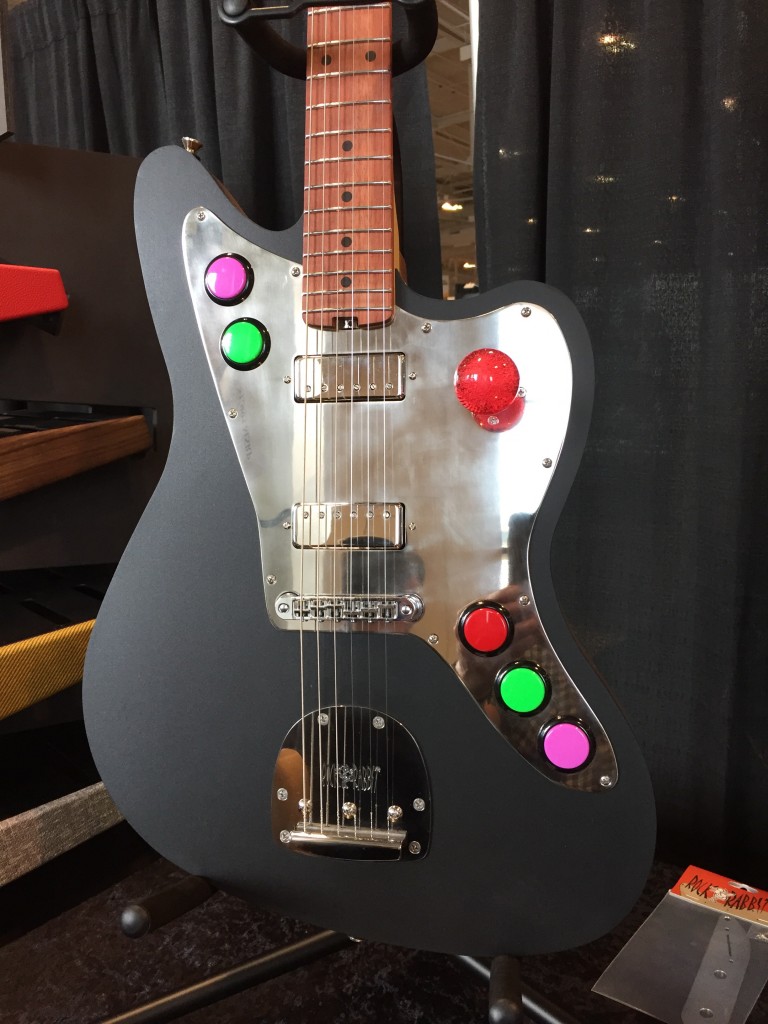