Pedals were rampant at Summer NAMM 2015. Symbolic of this trend was the giant, fully functional Cusack Reverb pedal. Yes, you had to manhandle that huge footswitch to turn it on. 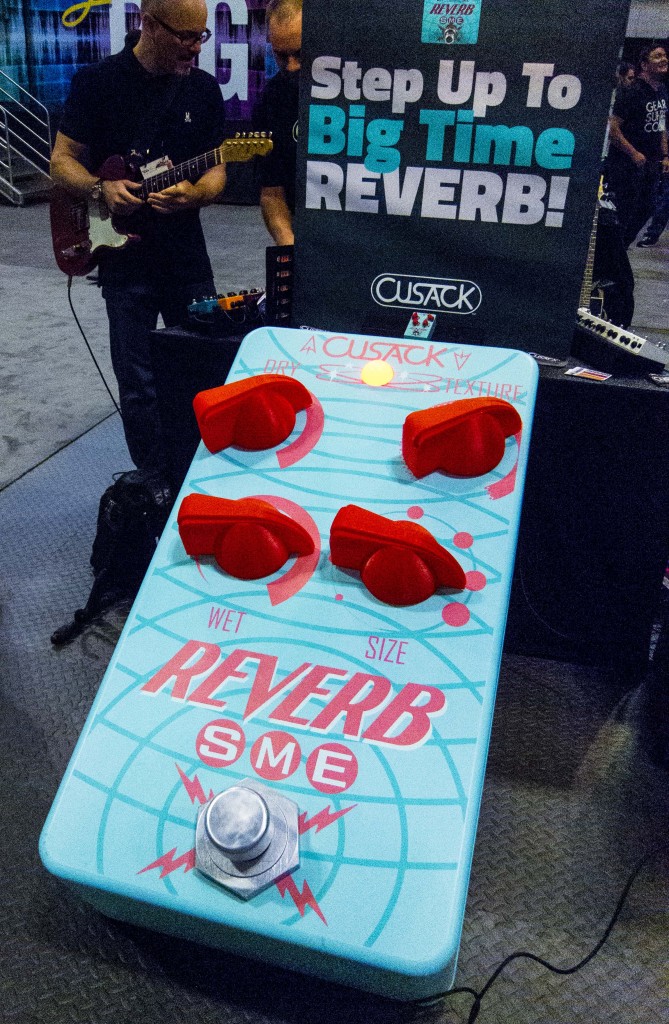 The big news at Nashville’s Summer NAMM was the “back-to-the-future” Gizmotron, which was previewed here. I actually got to play it at the show. Here are some first impressions. 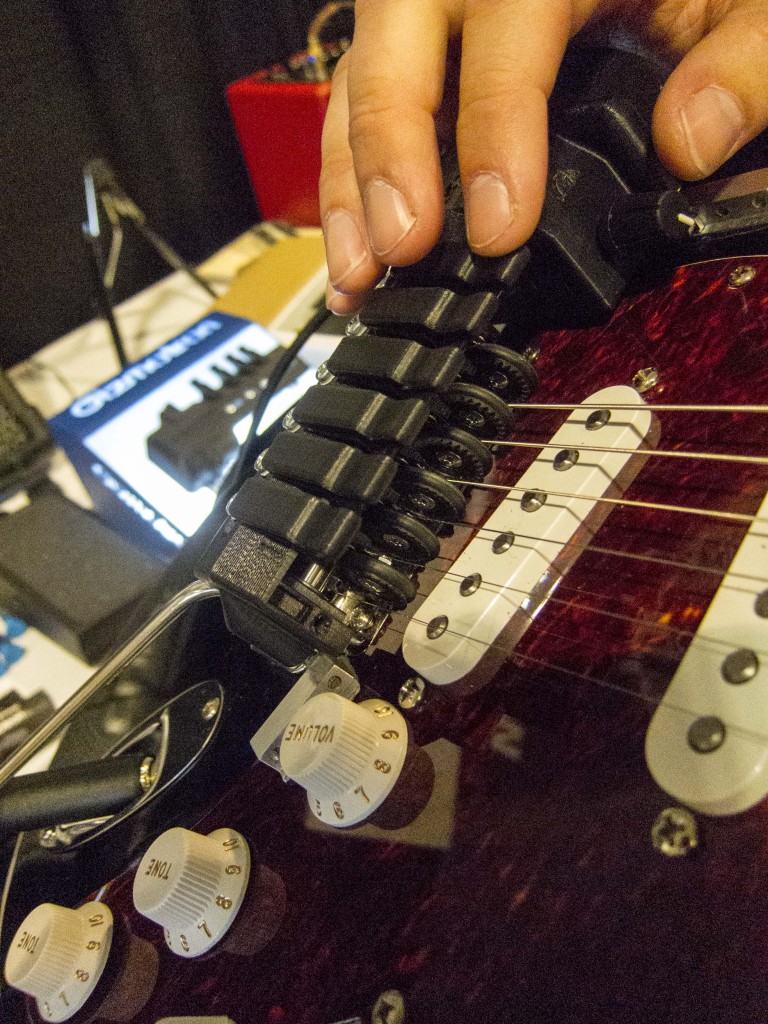 It was a prototype but the sound was all there: an utterly natural string sound, rich in harmonics and overtones of the acoustic variety. It is big, bulky, requires a new right-hand technique and some finger exertion to press the rotors to the string (I am assured the final version will be smoother). It also needs to be plugged in to the wall (or to a mobile rechargeable charger). Nevertheless, it appears to be a device that will find a place in every soundtrack composer’s studio, and onstage with any guitarist seeking an alternative to the cool but more electronic sounds of a Sustainiac, EBow, or Wond.

Despite the show’s small size, I still managed to miss, but fortunately discovered  later, the Pittsburgh Modular Synthesizers Patch Box, which promises to offer guitarists the versatility of tones and sonic control currently enjoyed by modular synthesists.

For sheer moderne appearance, it is hard to top the new line of Roger Mayer pedals—The Voodoo TC series.

The big knobs don’t just look cool, they are functional as well.

No new pedals from Eventide but some exciting new additions to the already awesome H9. CrushStation for Eventide H9 could quite possibly change your mind about the attributes of digital distortion. Look for a GM review soon. 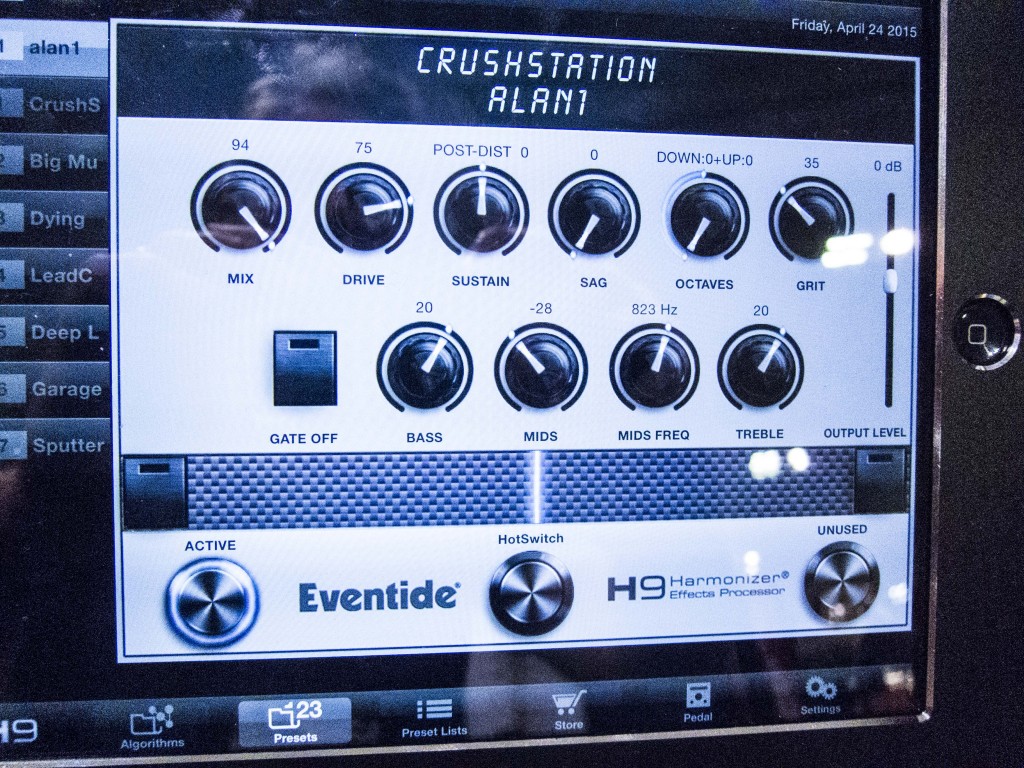 Also new for the H9 and other Eventide Stompboxes is the option for Pre or Post Routing. Many players run in mono so Eventide has come up with a use for the extra ins and outs. They can be used as an effects loop with the inserted effects run pre or post the Eventide effects. For example, run the new CrushStation in front of an inserted Deluxe Memory Man, or run the H9’s lush reverb post your inserted Klon.

Electro-Harmonix showed the 22500 Dual Stereo Looper. The 22500 employs two audio tracks that can be played in parallel or series to enable punching in and out of harmonies and rhythms, or using each loop as different sections of a song. It can record up to 12 hours with the supplied 8GB SD card. 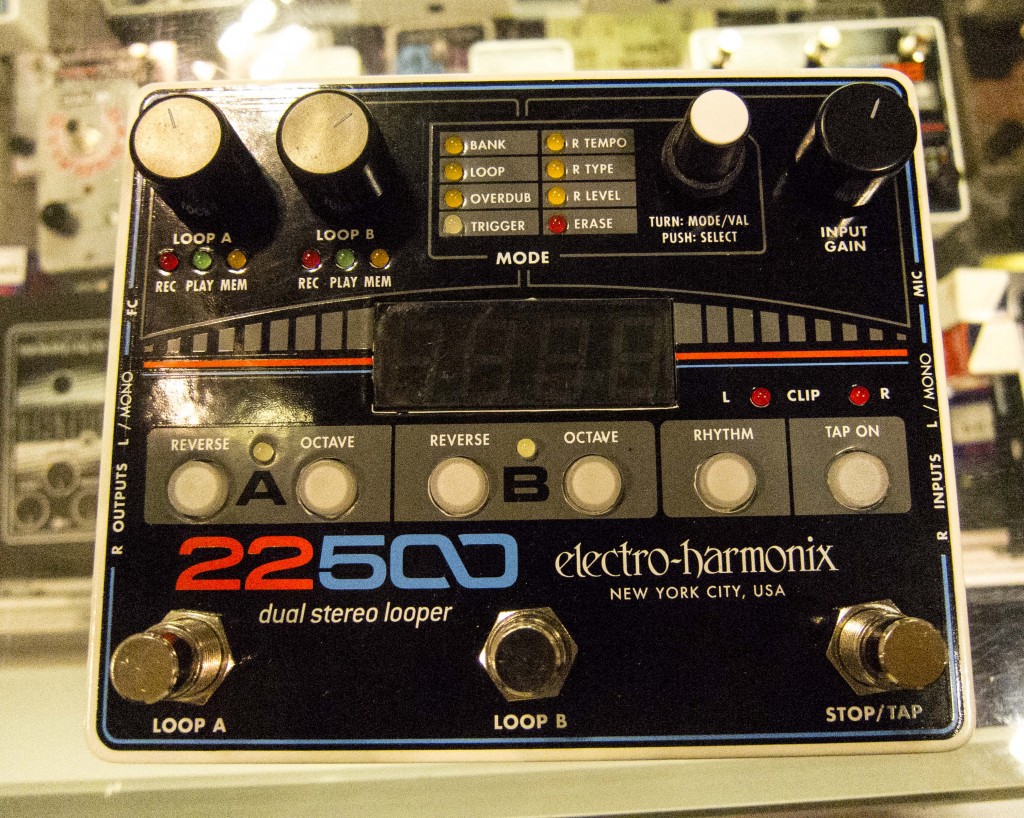 They also reintroduced their Silencer noise gate, adding an effects loop this time around.

Pedal mania had increased the demand for clean amp canvases on which to paint with a variety of stomp boxes. Roland’s reintroduced JC-40 fits the bill admirably, offering clean, relatively uncolored power. The famous Dimensional Space Chorus stereo effect has been upgraded with selectable fixed or manual modes. Now included is a front-panel stereo input, stereo line out, and a stereo effects loop to retain the stereo image put out by your pedals. 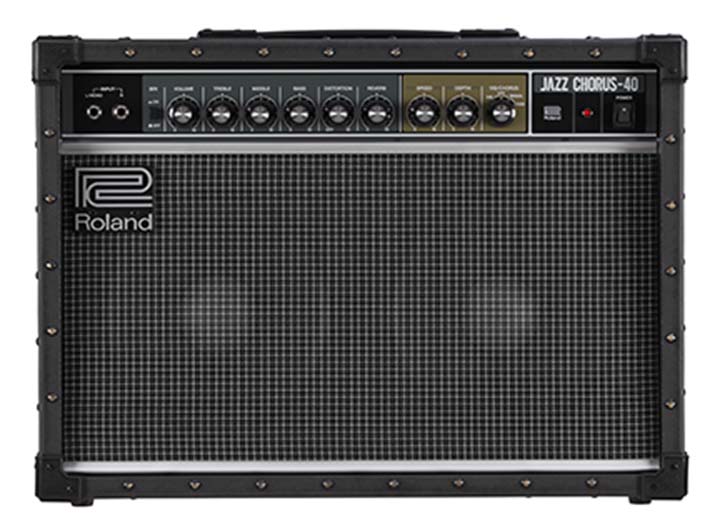 One of those pedals might be the new Boss DD-500 digital delay.

Included among the DD-500’s 12 modes are basic delays, analog and tape echo types, pattern-based effects, and complex modern delay lines that employ pitch shifting, filtering, and other processing. Emulations offered include1980s classics like the Roland SDE-2000 and SDE-3000 rack units and the BOSS DD-2. Each delay type includes four-band EQ, modulation, and ducking. The A, B, and TAP/CTL switches can be customized and additional parameters can be controlled via an optional expression pedal, external switches, and MIDI. The DD-500 includes a Phrase Loop function with up to 60 seconds of stereo recording time (120 seconds in mono). USB provides computer connection for patch backup and MIDI control with DAW software. 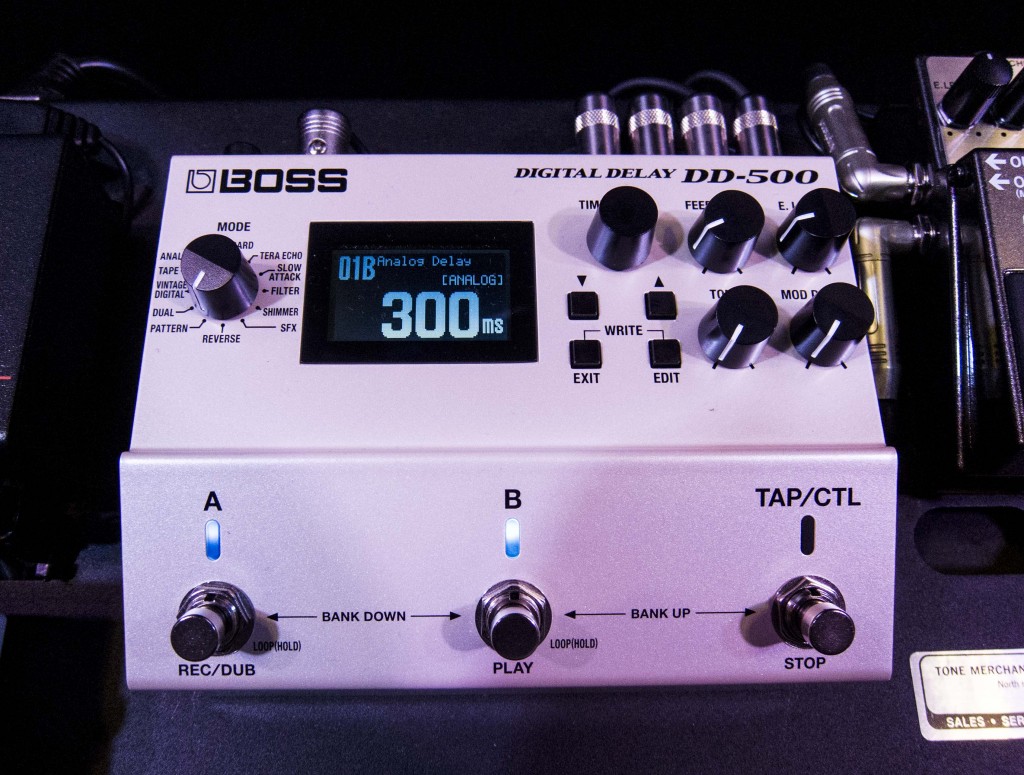 You can never have too many reverb options and the new RV-6 offers one more. Users can select among eight distinctive reverb types, including Room, Hall, Plate and Spring, Modulate, Dynamic, Shimmer and Reverb+Delay. The RV-6’s auto-switching jacks support mono, mono-to-stereo, and stereo-to-stereo operation. Plugging into the B input only, outputs a 100-percent wet sound. Another input allows an optional expression pedal to control the effect level. 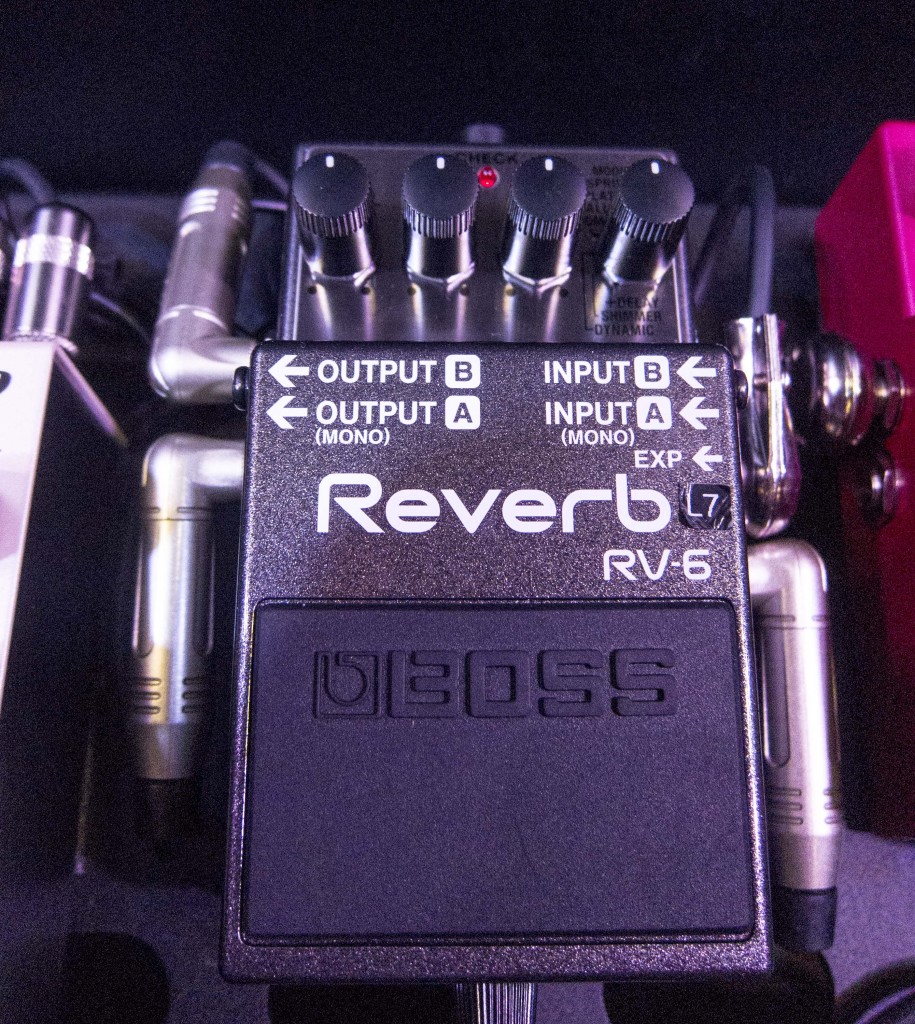 Their new PW-3 Wah Pedal is more compact than many and offers welcome status LEDs on each side of the pedal, making it easy to see when the wah is activated. 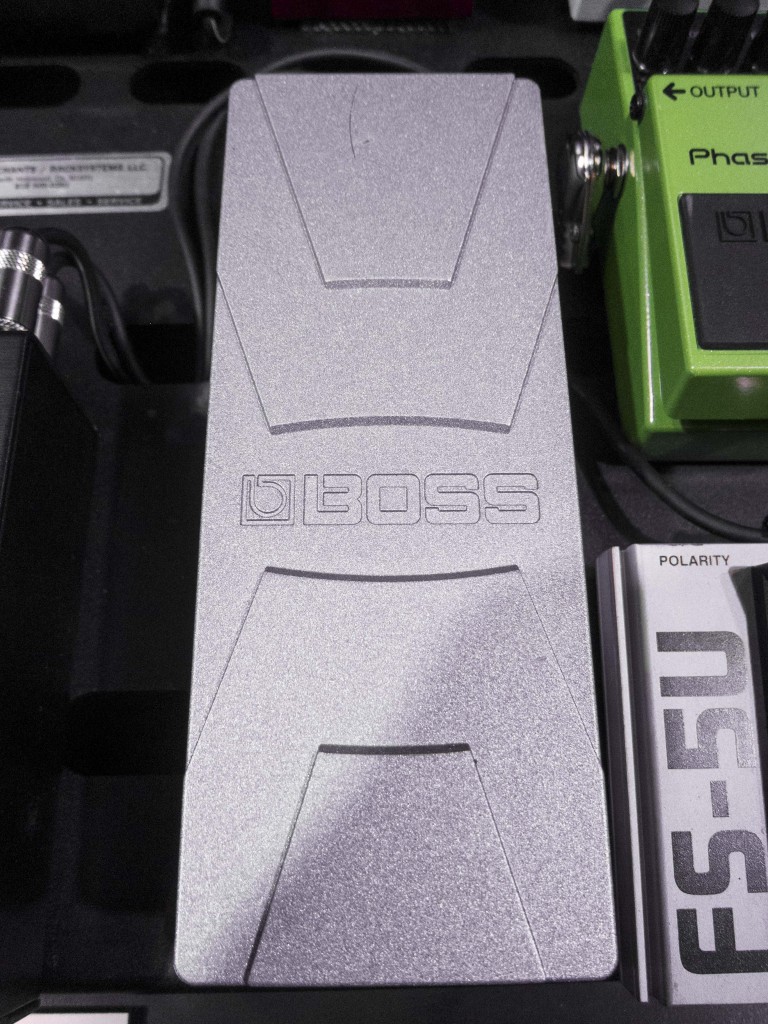 The Earthquaker folks pulled off the herculean feet of moving into a larger facility in Akron almost simultaneously with bringing their booth to Nashville—and introducing three new pedals.

The Interstellar Orbiter is a dual resonant filter controlled by a single LFO that sweeps each filter in opposite directions. Three universal controls govern the center frequency of both filters, the rate of the LFO, and the blend of dry signal. There are expression pedal jacks for the master Frequency and the LFO rate. Each filter is voiced differently and has controls for LFO intensity, resonance and mix. It can do wah emulations, complex vocal formant filter, rotary speaker effects and more.

The Tentacle Analog Octave is a classic analog octave up effect, based on the Hoof Reaper pedal. It is designed to add a fuzz-style upper octave to a distorted amp, overdrive or fuzz pedal. Also cool through a clean amp for ring mod effects.

The Dunes offers the tone of the larger Palisades (a new take on the classic 808 overdrive) but with a simplified interface and a smaller footprint. It features the same Gain, Tone and Level controls along with some selected voices including MOSFET for a tight crunchy sound, Silicon for the classic 808 sound and None, which goes from clean boost to pure op amp distortion with a massive volume boost. Bandwidth settings provide classic tone or more low end.

Pigtronix unveiled two new delay pedals: Echolution 2 Ultra Pro and Echolution 2 Filter Pro. Both feature Independent Pitch Shifting on two synchronized delays, which can be overlapped or set to numerous rhythmic configurations. The tap tempo and MIDI-controlled dual delays can be set to pitch-shift by any musical interval within an octave. Sweeping filters and complex modulation options—with up to five LFOs offer a wide range of effects. 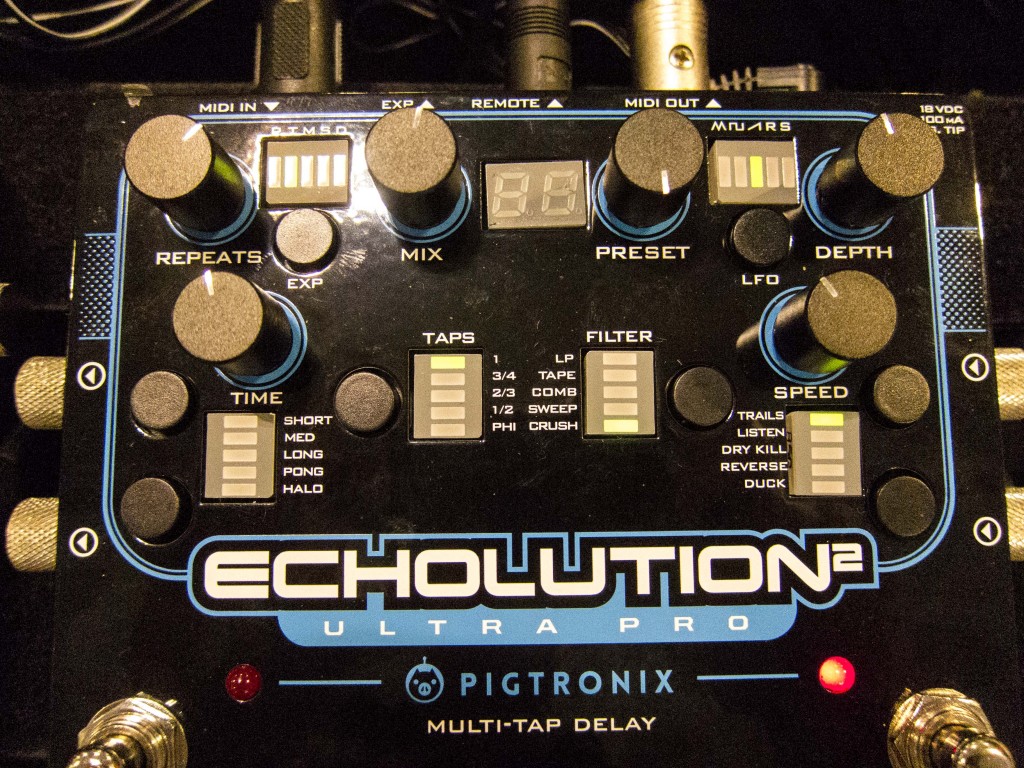 The Echolution 2 Ultra Pro sports 30 individual front-panel algorithms that can be selected in any combination, and expression pedal and envelope mapping options available via real-time MIDI or PC/MAC app control.

For fans of the “all-in-one” solution, the Helix seems like a place to go. Effects and amps are modeled with the latest DSP technology, which is getting frighteningly accurate. My friend Matt Gallagher from Sweetwater explains it all for you. I didn’t get to play through it but can attest it is built like a tank.

And some more advanced stuff from Sean Halley of Line 6. 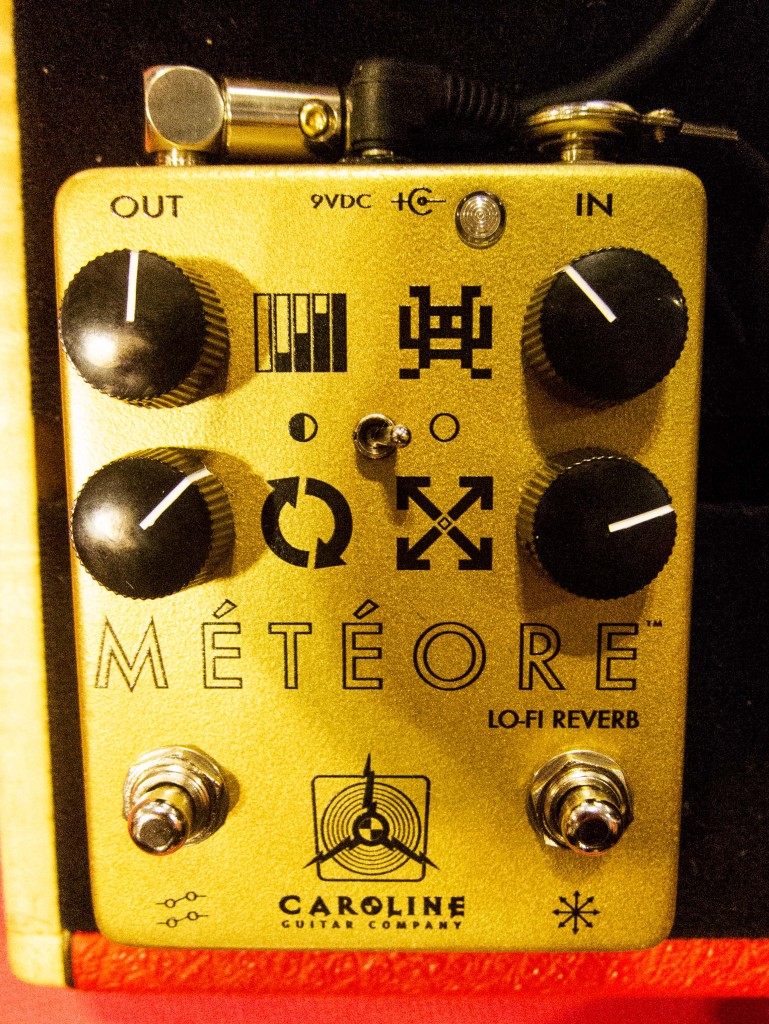 David Torn fans may have heard him mention the Chase Bliss Warped Vinyl pedal in interviews. All their analog signal path pedals offer digital control over parameters. Along with the aforementioned Warped Vinyl Analog Vibrato/Chorus, Chase Bliss showed Wombtone Analog Phaser, and Gravitas Analog Tremolo. All three are capable of sounds you haven’t heard before through their many ways to manipulate parameters. Parameter options are controlled through a series of dipswitches fortunately located outside the casing.

These pedals look standard and some are. Others offer some interesting twists, available at the flick of a mini-toggle. Like the Radical Delay…

This Brooklyn-based company’s effects sport cool graphics and names like Reverend Mother and Ortenszia, serving up various flavors of fuzz. 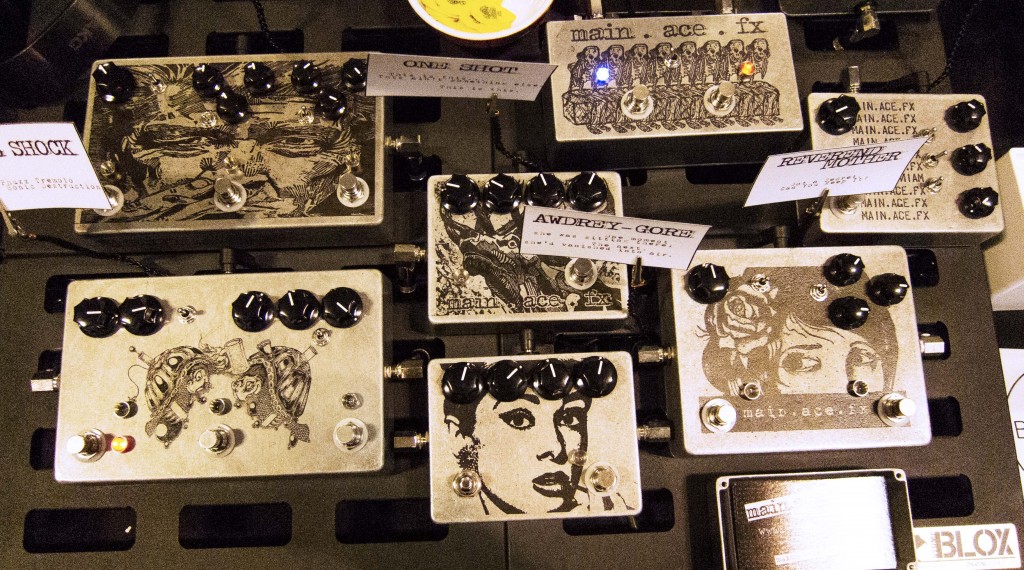 Hailing from Austin, TX. Screaminfx also leans toward grit pedals but offers a transparent twist, as well as a spring reverb. 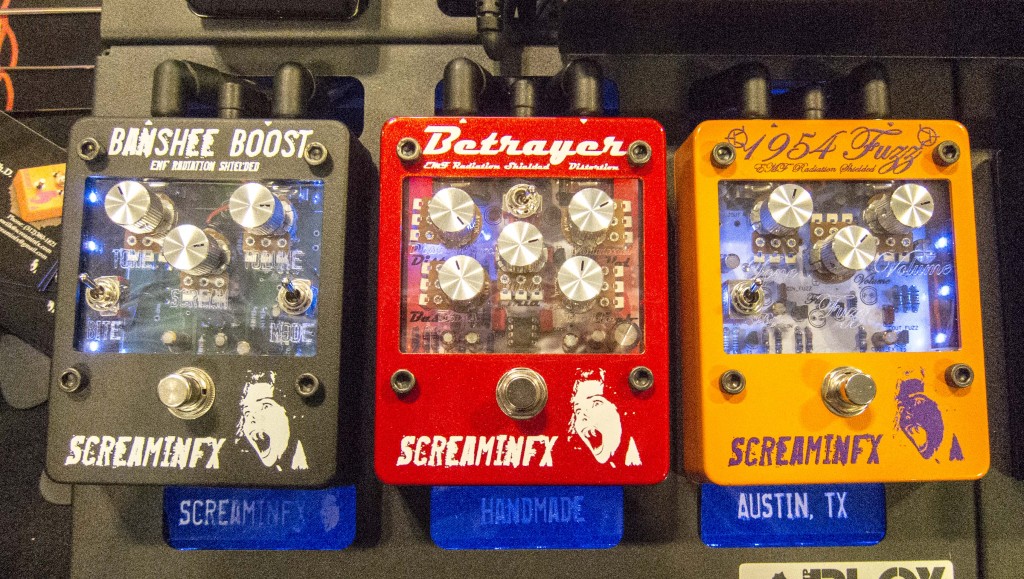 Wampler took one of our favorite pedals, the Latitude tremolo, and offered it with a smaller footprint for those who don’t require tap tempo (Hey! Dick Dale and Duane Eddy didn’t have no tap tremolo). 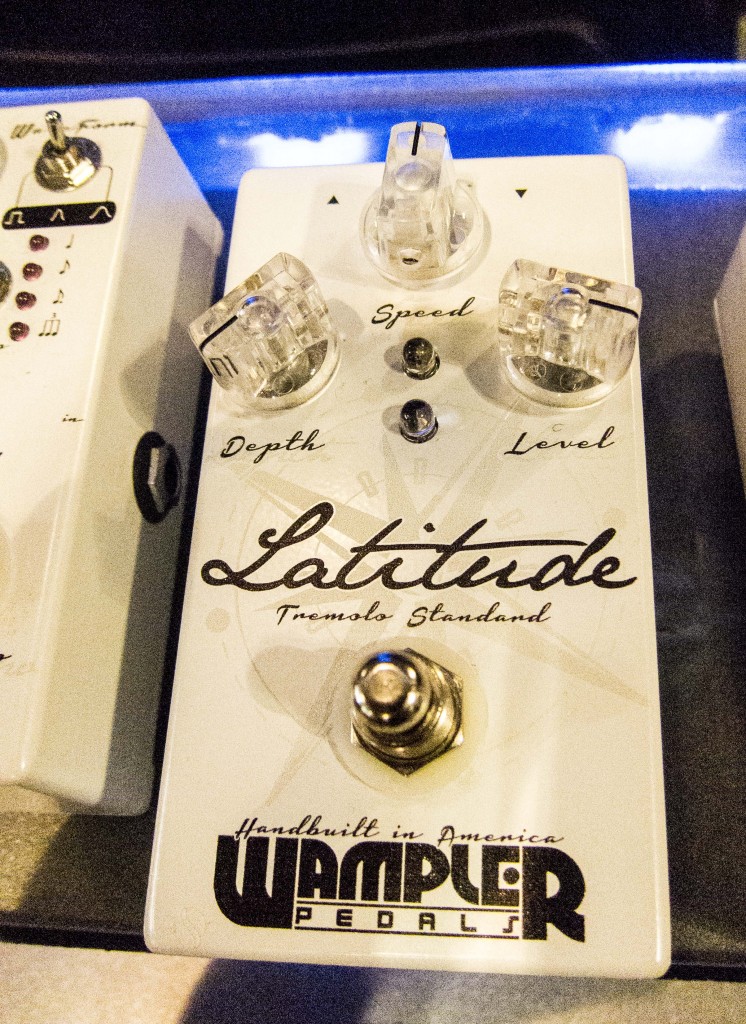 Let’s face it, Fano makes some of the coolest looking, best playing, most vintage feeling and sounding instruments available. Unfortunately they sit at a price point that is affordable by some but leaves the rest of us drooling outside the shop window.

The good news is Premier Builders Guild was showing a line of Fanos that come in at about a grand less than the custom models. These are the same quality instruments; the only difference is you don’t get to design them yourself. They are available in three classic styles and finishes. Now those of us in a slightly lower tax bracket can afford these fabulous guitars. 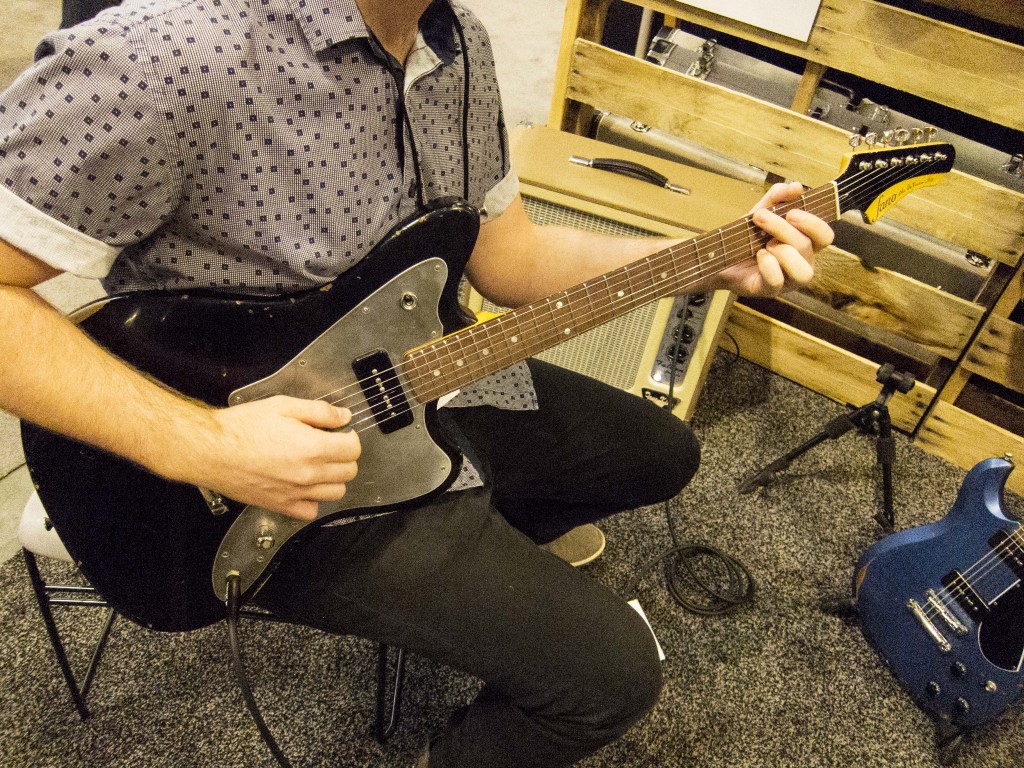 Wilcox had a strong presence at the show with live demos including a virtual drummer. For the unfamiliar, Wilcox Guitars are powered by the LightWave Optical Pickup System string transducer, which uses infrared light to sense string vibration, a method well suited for individual string processing and synth access. It features a separate transducer for each string, with no electrical or mechanical crosstalk between strings. The HexFX Editions bring the individual string outputs, along with a summed mono output, to a 13-pin DIN connector. The resulting output enables full synth access, individual string processing and modeling, and the use of a fanout box. 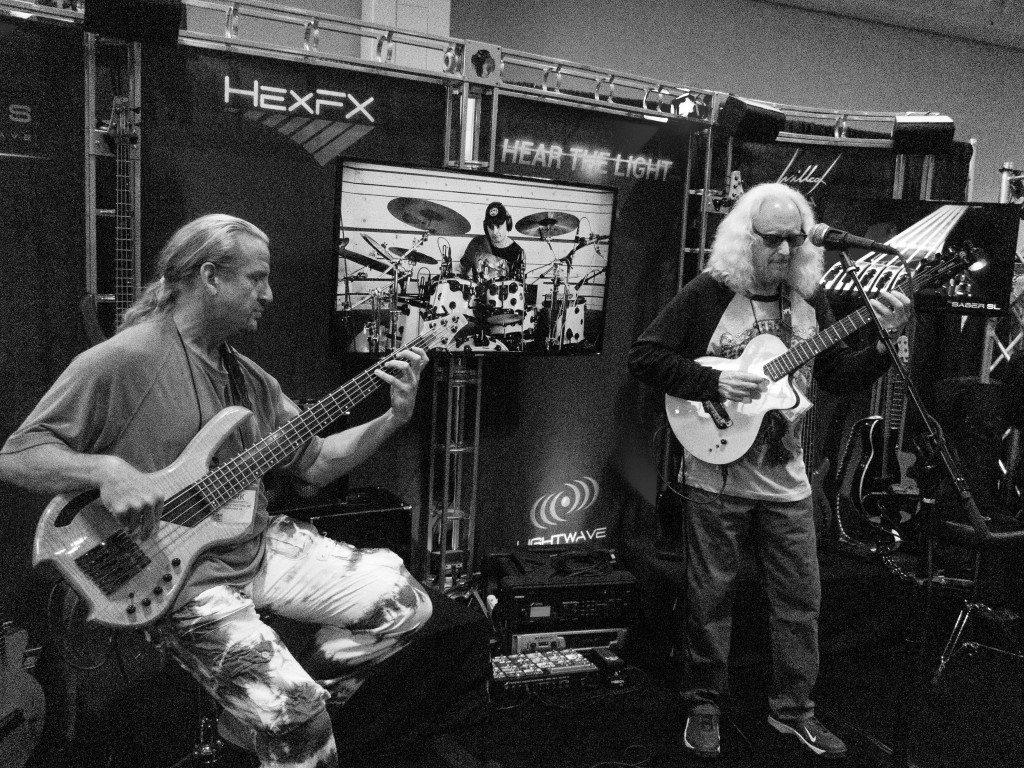 Our friends from the North unveiled a new acoustic/electric Baritone.

And a mandolin with space age styling. 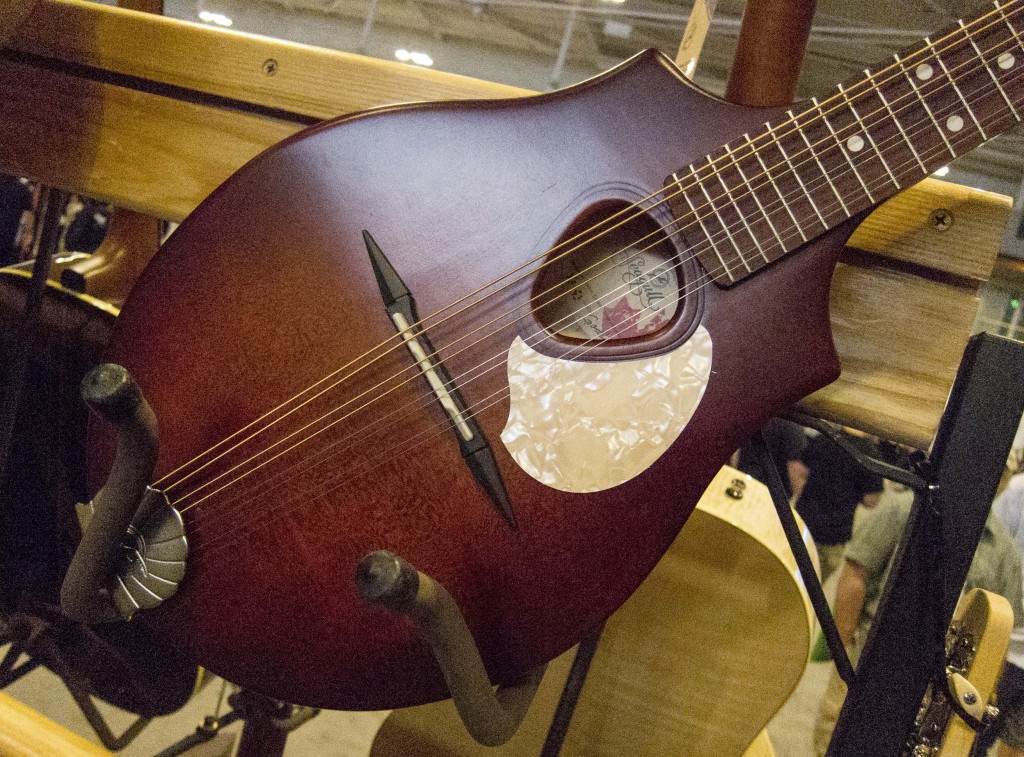 Best known for his lap guitars played by the likes of Ben Harper, Asher also offered up some of the most stunning six-string electrics at the show. 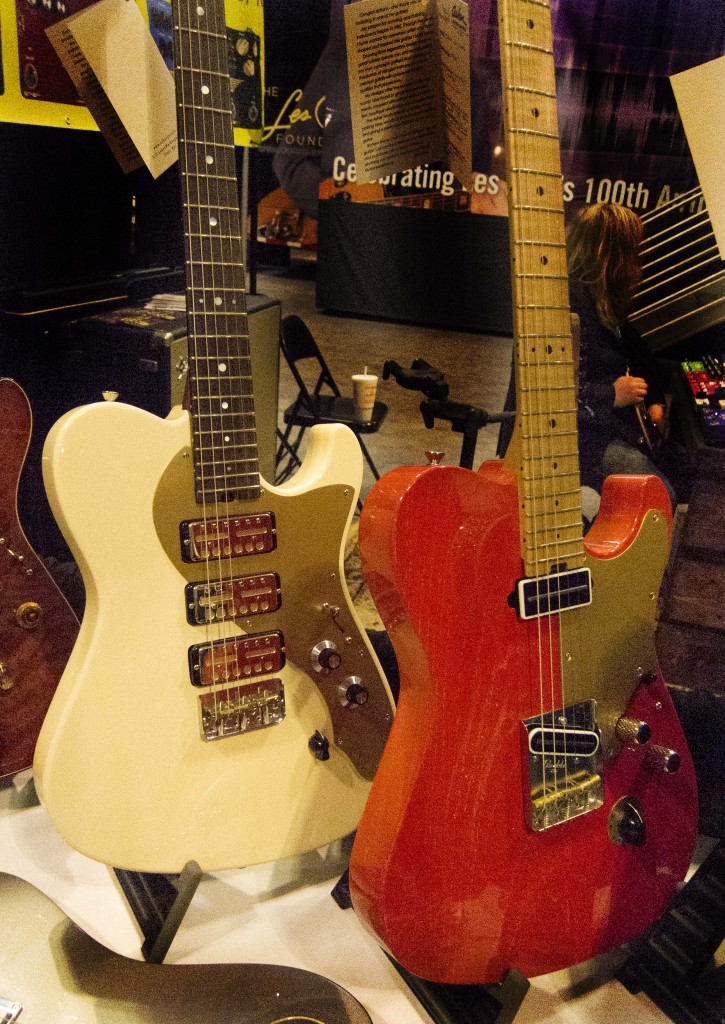 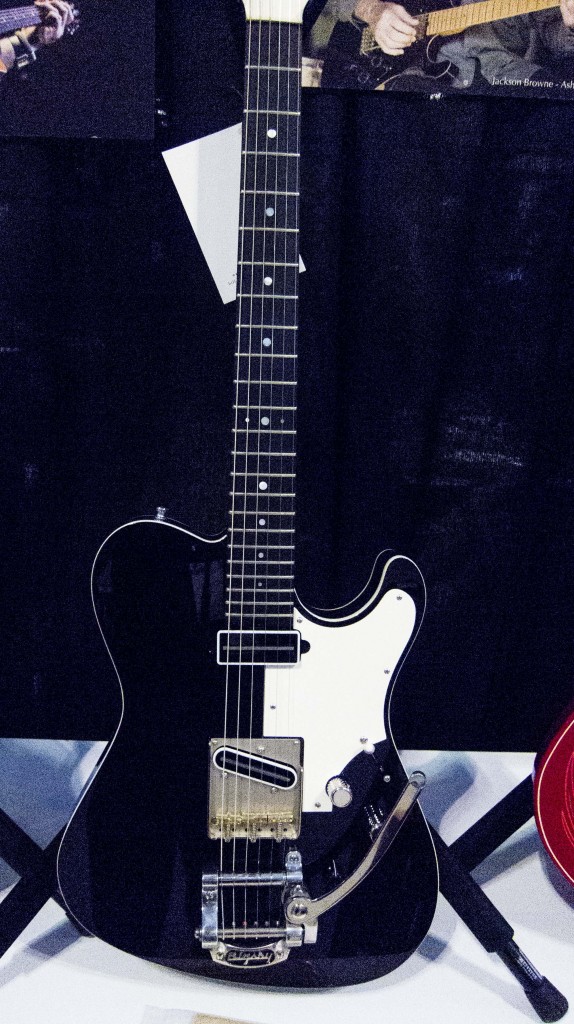 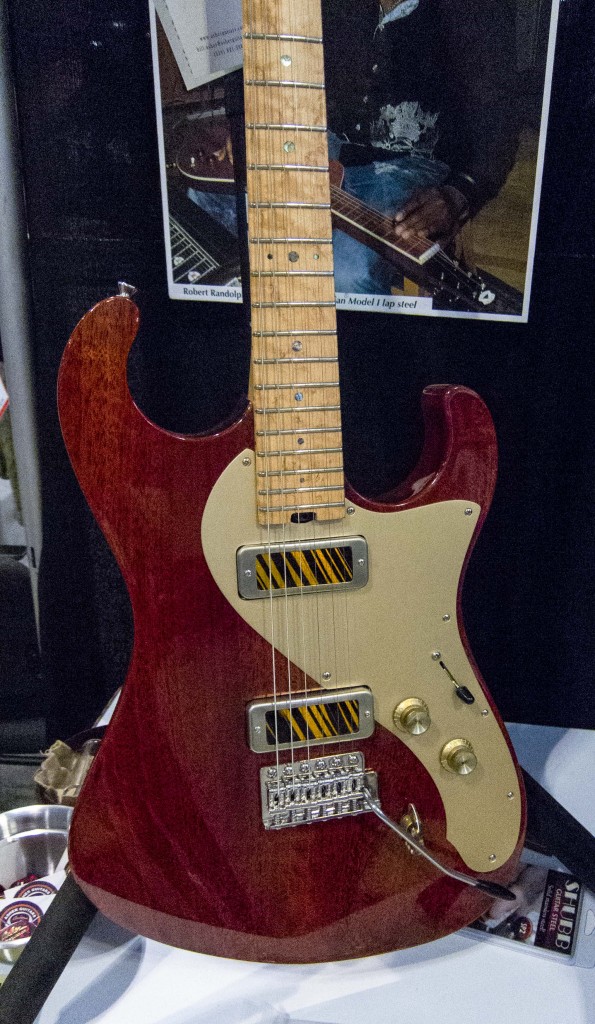 While there were many fine traditional amplifiers at summer NAMM, two new amps stood out as being of interest to the modern guitarist.

Earthquaker Devices was running their massive pedal board through a snowy white stack sporting a head with a cool minimalist design. They are still in the prototype stage but look for updates here as they become available. For now it is called Sound Projector 25 and is a Class A amplifier designed to use a variety of tubes. 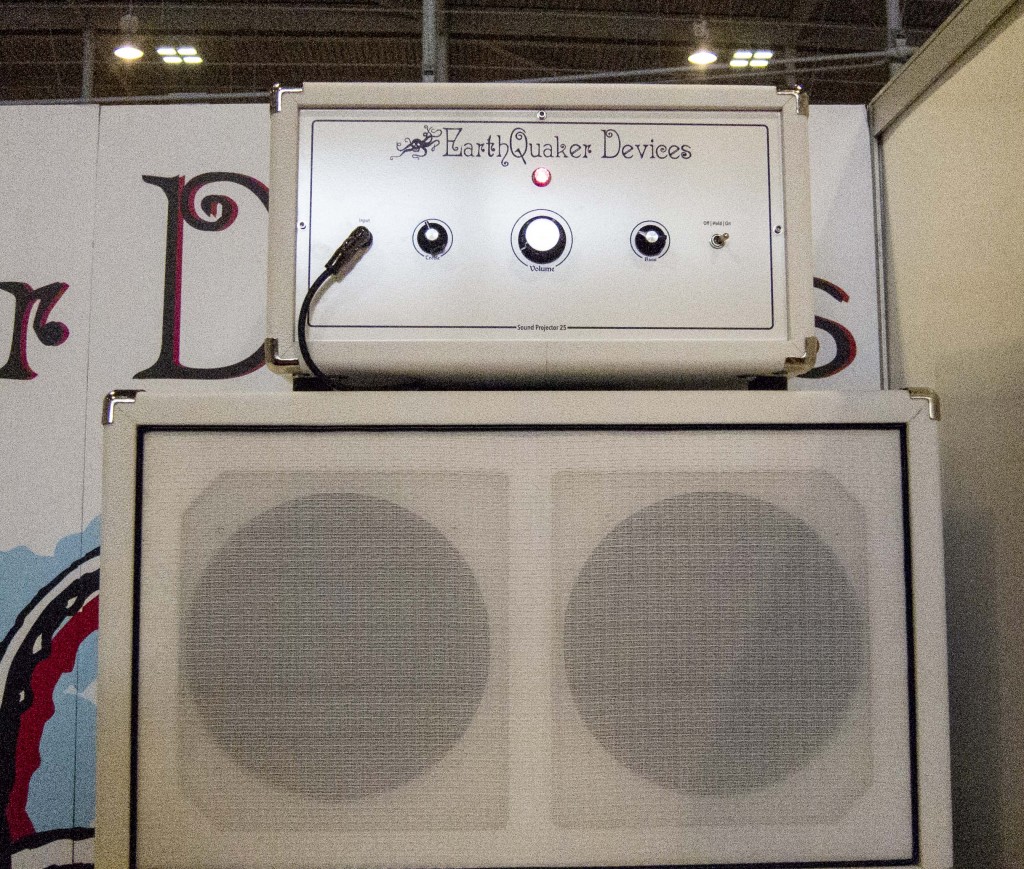 VHT was showing their i-Series, which let you directly port the amp-modeling app of your choice into a variety of stacks and combos providing differing amounts of power. A single 12AX7 tube fronts an unspecified solid-state power section. The Tone-Link circuitry purports to filter the sound for more realism. On evidence of what I heard at the show, it sounds pretty darn good.

EC Pedals offered some useful tools for managing your pedal board: the Superswitcher 2 and the Super-Interface.

As always, this is a subjective selection of the products on offer, ones I deemed of most interest to forward thinking guitarists. Feel free to check out the websites of Premier Guitar and Guitar Player as well as YouTube for things not covered here.