I am going to be representing Source Audio in Nashville to try and expose all the dealers and great players here to these sweet sounding and versatile effects. I am putting together a pedalboard of exclusively Source Audio products save for some new 1Spot Pro power sources from Truetone (formerly Visual Sound), cables from Planet Waves, and a Pedaltrain pedalboard. Eventually I will be hooking up a Keith McMillen SoftStep or 12 Step to program multiple pedal scenarios through the Soundblox Neuro Hub. Keep reading for some initial impressions. 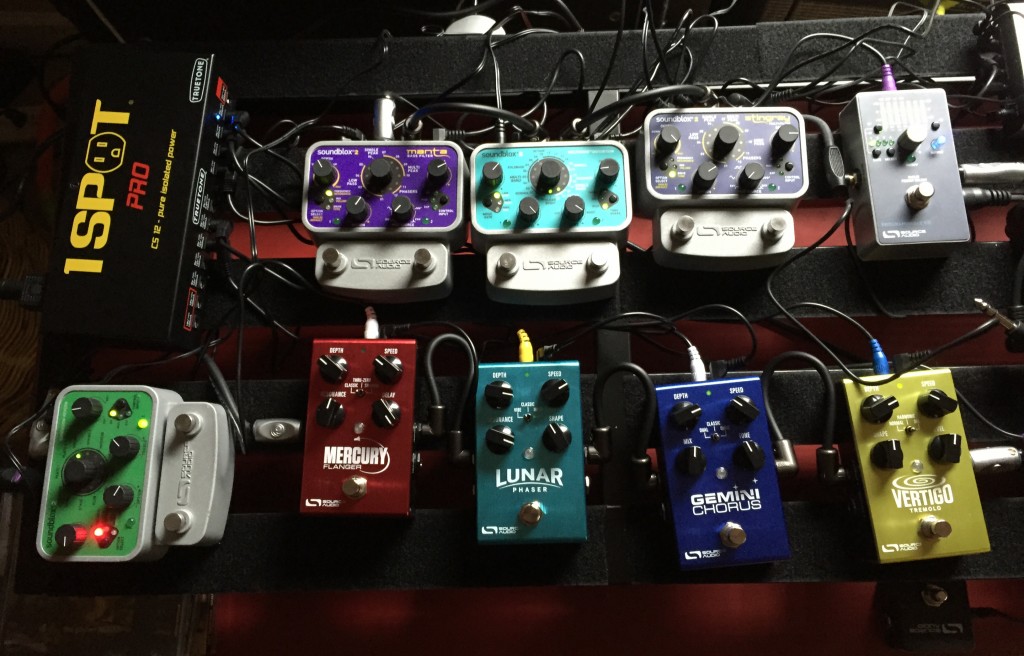 I started by laying everything out on the Pedaltrain board. Hint: when you are first laying out the pedals, raise the front of the the board (I used CDs) so the pedals don’t slip down. It contains the Neuro Hub, Stingray Multifilter, Multiwave Distortion, Manta Bass Filter, Veritgo Tremolo, Gemini Chorus, Lunar Phaser, Mercury Flanger and Dimension Reverb.

Almost all of the Source Audio pedals require 200mA to run optimally and I soon realized the 1 Spot Pro CS12 (reviewed here) wouldn’t handle them all so I put in a call for an additional CS 7. In the meantime I am powering some with their own adaptors.

I grabbed a Planet Waves DIY Solderless Pedalboard Cable Kit and began making connecting cables to supplement the ones I already had. While I have liked George’s L cables for pedalboards because they are low capacitance and the ends are so small, frankly, they are a pain in the ass to put together, often requiring much clipping of cable until a connection is made, and then still feeling fragile. The Planet Waves system is uber simple and solid. They even supply a clipper and a magnetic screwdriver so the set screw in the ends never gets lost. I have raved about Planet Waves before here and here, but they just keep coming up with great stuff. The cable ends clipped clean and slipped right into the ends. Tighten the screw and done—every one worked the first time.

There is always that moment when you have everything plugged in and cabled together when you wonder if it is going to work. After a couple of user error moments, where I realized I hadn’t plugged in one thing or another, the board passed signal perfectly. And when I say perfectly, I mean perfectly: despite nine pedals and a lot of cable, the dry guitar sound was terrific. The pedals from Source Audio allow you to choose True Bypass (Relay) or Active Analog Buffered, and I probably had one or two buffering the signal. In any case, there was neither dullness that can be caused by all true bypass pedals and too much cable, nor the high end edginess that you get with bad buffering. Finally, when not playing, the ensemble was dead quiet.

I have described how great the One Series Vertigo Tremolo sounds and the joys of the Neuro app here. The other One Series pedals sound equally great and offer similar sonic variety. I am just beginning to delve into the possibilities of the Neuro Hub’s MIDI and expression control, which I will report on soon, but for starters, plugging the Tap Tempo switch into the Hub, allowed me to easily tap in tempos for all the Series One pedals simultaneously.

This is going to be fun.