Recently it was time to upgrade my main pedalboard. I was getting more and more into

the Eventide H9. I realized it could do everything I needed from the Electro-Harmonix Ring thing I currently employed and way more. The problem was, the Voodoo Lab Pedal Power that had served me well so far would no longer power everything. I could have added a Pedal Power Digital, or switched to a Voodoo Lab Mondo (as used on my big board, featured here) but instead the solution arrived in the form of the new Truetone 1 Spot Pro CS 12 ($179.95). It will power the entire board with outputs left over for even more pedals should I choose to get crazy (er). Here is the lowdown on this new bit of kit. 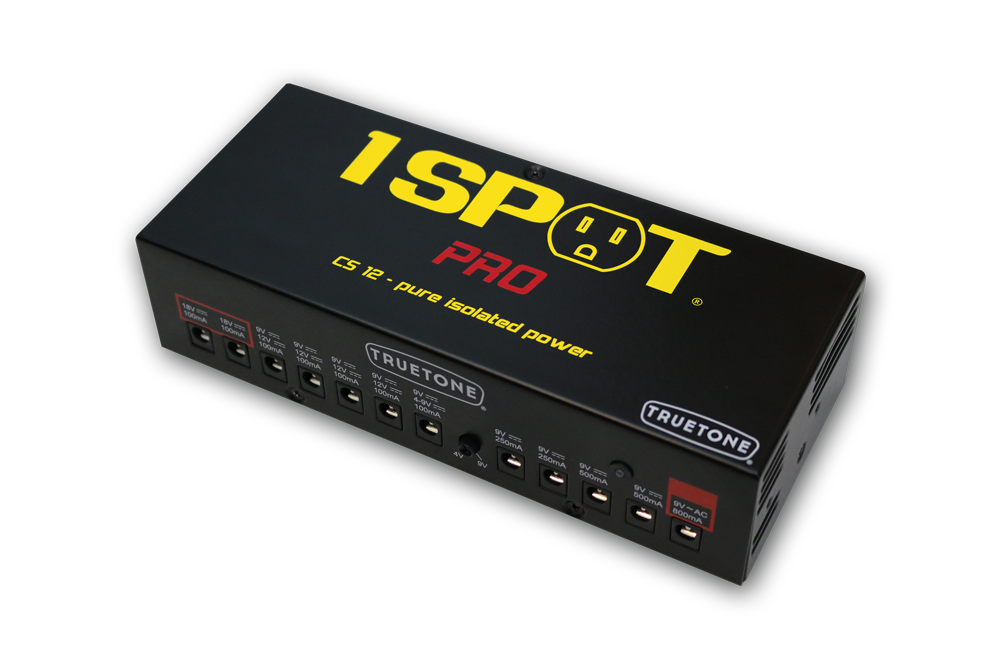 The 1 Spot Pro CS12 provides 12 outputs to power just about any effect pedal. All 12 outputs are completely isolated, regulated, and filtered. It comes with a variety of power cables: A dozen 5.5×2.1mm barrel plugs of different lengths, four Converter Plugs, and a battery clip.

As the model number implies, the CS12 sports 12 Outputs. The first two are18V 100 mA, for the occasional pedal that requires 18-volts, like some overdrives and EQs. Outputs three through seven are 100mA, switchable from 9 Vdc to12Vdc through five mini switches on the bottom of the unit. Outputs eight and nine offer 9Vdc at 250mA, while ten and eleven are 9Vdc at 500mA. Finally, output 12 is 9 volts AC at 800 mA. The back panel of the 1 Spot Pro CS12 has a 2-position 115/230V~ switch, allowing it to be used in most countries.

As with any device like this, it is important for you to know the power requirements of each of your pedals: the voltage required, AC or DC, and polarity (Center pin positive or negative). Pedals with high milliamp draws such as Strymon will use outputs eight through eleven. Eventide pedals such as the Time Factor and my H9 will be powered by outputs ten and eleven with the addition of the included CL6 converter for proper dc jack tip size and polarity.

The 1 Spot will also power most Line 6 pedals, save for the POD or M13—the milliamp draw is ultimately too large for those units. Output seven is best for overdrives or fuzzes that sound/feel better at lower voltages. You set the dip switch on the unit’s base to the “on” position, and adjust the mini-pot on the face of the unit to the desired voltage—anywhere from 4-9Vdc. 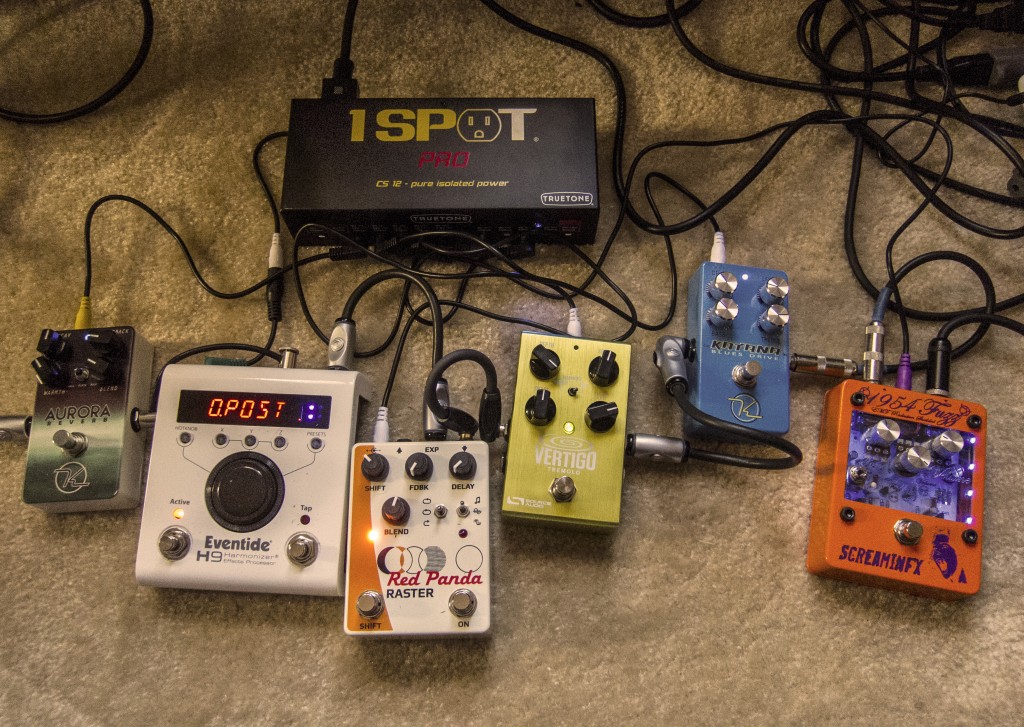 Truetone claims that outputs one through eleven can each handle more than the stated mA number as long never exceed the maximum total current rating of all outputs simultaneously—3000mA by my calculations. I found that one of the 100mA outputs did indeed run a Source Audio Vertigo tremolo pedal, even though its included adaptor was rated 300mA. That is, until I tried to use the Neuro app to burn a new preset into the pedal. That required switching it to one of the 250 or 500mA outputs to work properly.

There are many choices out there, but with the 1 Spot Pro CS 12, Truetone has a serious new contender in the power supply sweepstakes.