Compact reverb pedals have been around for three decades, since the Boss RV-2 arrived on the scene, and have largely settled into similar variations of Plate, Spring, Hall, and Room settings, with the occasional reverse and shimmer thrown in.

But Earthquaker Devices has developed a reputation for putting its own spin on even the most elemental effects, and their Transmisser ($225) twists this now common pedal into a unique new source of ambient sounds.

The Transmisser’s Mix knob does exactly what you would expect—blends the dry and wet signals, but that’s where any resemblance to your typical reverb ends. Yes, Decay adjusts the length of the decay, but the shortest decay here is already into near cathedral territory, signaling that this pedal wants nothing to do with subtlety; only avid ambience lovers need apply. Full up decay allows building layers, but stops short of infinite.

If you want those layers to sit well behind your original signal, the Darkness knob helps murk them up. The Freq(uency) knob sets the resonant frequency of the reverb with the accent on “resonant.” At one end it creates whistling peaks that approach self-oscillation, while lower resonances add to the highly vocal quality of this effect. The frequency setting can also be controlled with an expression pedal. 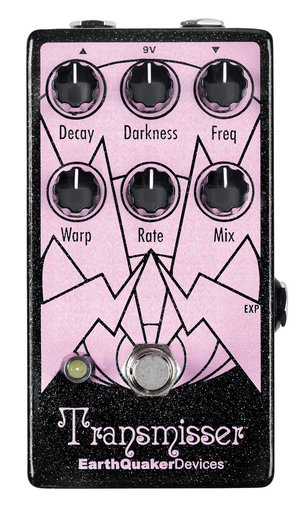 The Warp knob changes the character of the modulation in wild and wondrous ways that are hard to describe (check out the video, or better yet check out the pedal). The warp effect can range from seasick pitch shifts to gorgeous moving waves of ’verb. The Rate knob adjusts the speed of the modulation.

Though the Transmisser’s overall effect is anything but restrained, the shifts in coloration afforded by these controls can range from subtle to massive, allowing an almost infinite array of ambient hues.

“Vocal” is a word that kept coming to mind as the Transmisser cloaked my single notes, arpeggios, and swelled chords in choruses of monks or Viennese boys. Inspiring is another word evoked by this unique pedal—it was hard to stop making music with it. I especially loved using the Earthquaker pedal with an EBow. The EBow’s sustained notes can often sound static, but the waves of the Warp effect kept things moving, and I could add further interest by plugging in an expression pedal and sweeping the frequency.

For the modern guitarist who loves reverb, ambience, and sound design, the Earthquaker Devices Transmisser is a must have.