With its new One Series effects, Source Audio has created a line of products that should be equally appealing to conservative and progressive guitarists alike. With its rectangular housing and 4.5 in. long x 2.75 in. wide x 2 in. high (including knobs) size it their most traditional looking and pedalboard friendly unit yet. Combine this familiar package with classic effects (Tremolo, Chorus, Flanger, Phaser—and soon, Overdrive and Fuzz) sporting a quartet of recognizable control knobs, and you have a stompbox series that should make even the most hidebound picker comfortable.

But, in the Source Audio tradition, underneath the hood of each pedal lurks a high degree of tweakability for creating a wealth of typical and atypical effects, as well as a luxurious level of parameter control—both of which will delight the modern player. Here we look at the Vertigo Tremolo pedal. 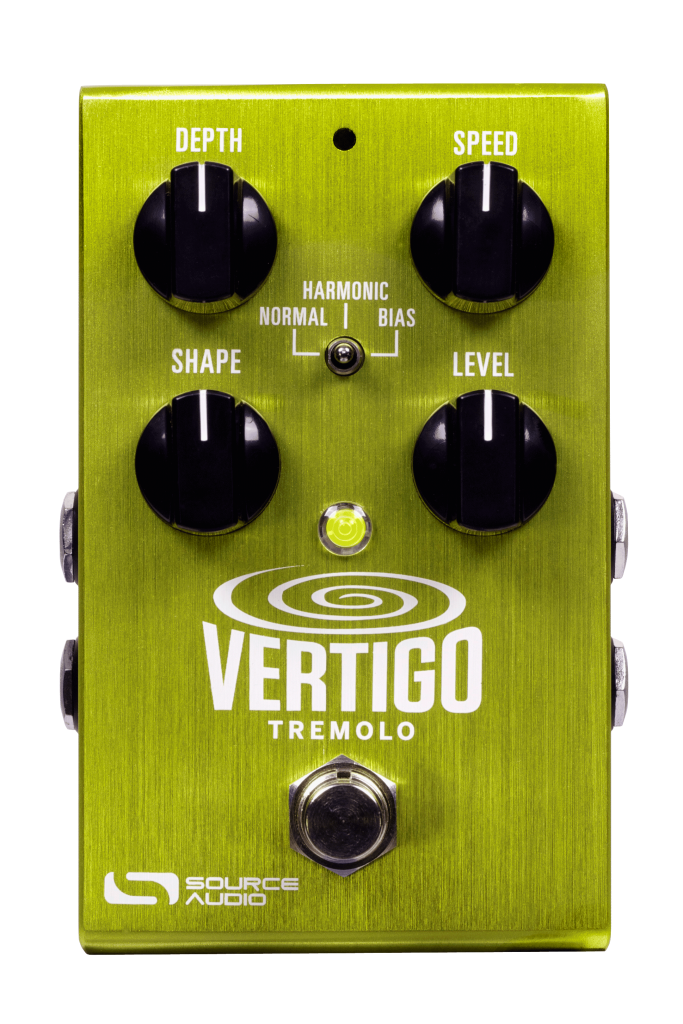 Tweaking the Depth, Speed, and Shape knobs already offered a tremendous range of sounds from swamp to chop, while the Level knob let me adjust for the psycho-acoustic level drop that often accompanies the use of modulation effects. The Depth control knob was notable for providing many more usable degrees of depth than I have experienced with other trems, which often shift the effect amount suddenly from heavy to inaudible.

Traditional guitarists can stop here and have a great tremolo at a great price. But, as we shall see, connecting the Vertigo to the free Neuro Mobile App for iOS devices (Android coming soon) offers much, much more.

The Vertigo sports Stereo Input and Output Jacks and a mini-input that makes it compatible with the Neuro Hub (more about this later), Source Audio expression pedals and the Hot Hand 3 Universal Wireless Effects Controller. A USB port connects the pedal to Mac or Windows PC for firmware updates and the forthcoming, in-depth effects editing software. You can also use this port to send the Vertigo MIDI Clock or CC messages via DAW software.

After easily installing the Neuro Mobile App on my iPhone, I linked it to the Vertigo by connecting the mobile device’s headphone jack to the Stereo Input 2 on the pedal with the included Neuro App connector cable (1/8″ to ¼”). 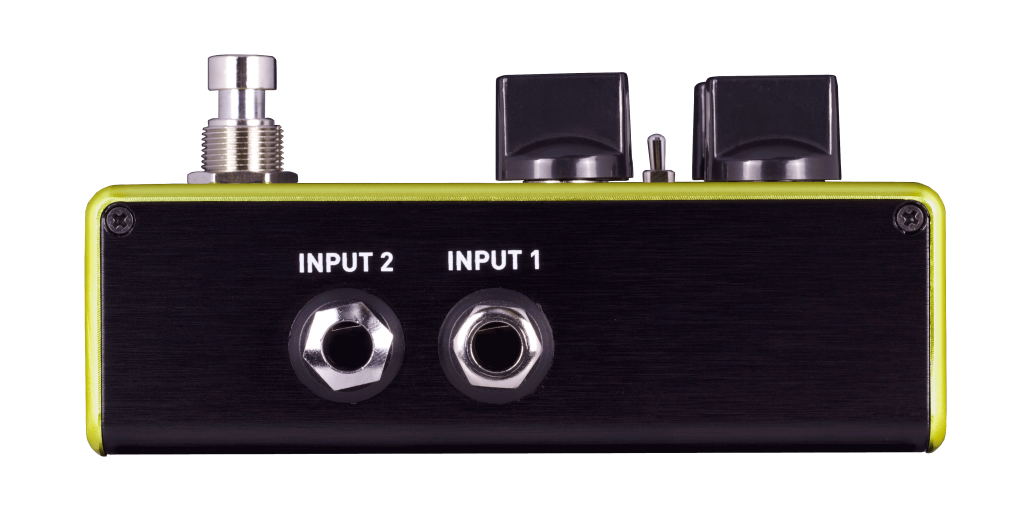 All the parameters accessed by the knobs on the hardware are on the software as well, but with the app I could tweak an extensive range of additional parameters. I could set a minimum and maximum for the speed and/or increase the speed past the knob’s usual maximum, into ring modulator range. I could also offset the phase of the LFO for interesting stereo effects. If you don’t need the stereo function, the Neuro app lets you set up the extra input and output as a loop, where you can insert another effect pedal that only comes on when the Vertigo is engaged.

Perhaps my favorite thing about the app is it let me enter exact tempo bpms to sync with drum loops or clicks, something that can be difficult to tap in. You can tap tempos on the app, though not easily; much easier was adding the Source Audio Tap Tempo Switch ($40) and tapping with my foot. When using the external foot switch, the Control LED blinks to show the current tempo and the Speed knob sets subdivisions like quarter, eighths, sixteenths, and triplets. 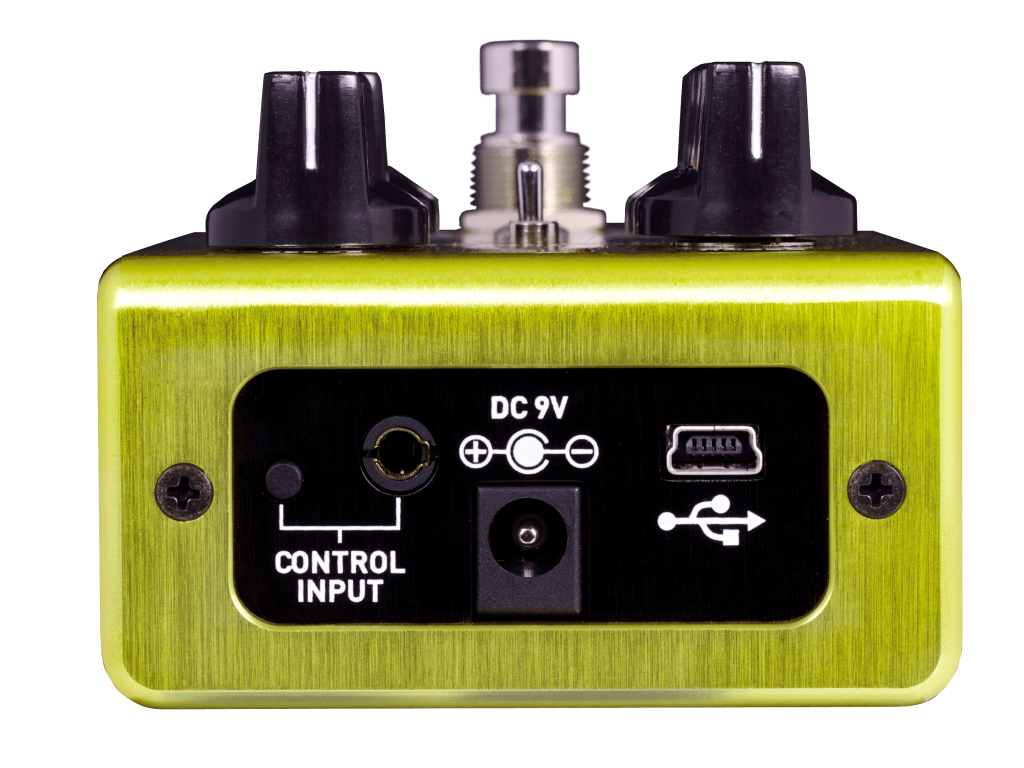 Within the app I could adjust the bass, mids, and treble, with a parametric eq (even traditionalists will appreciate being able to fine tune the tone to taste), and set the wet/dry level of the effect (useful when programming in more extreme effects). When I modified a sound to my liking I could burn it to one of the three toggle positions.

Once I’ve fine-tuned an effect or created a new one, I can save it to my personal collection and share it with other users. Source Audio will also be expanding their library of downloadable free presets.

Did I mention the Neuro app also let me choose whether the Vertigo was buffered or true bypass by just flipping a virtual switch on the app—without having to go inside and mess with tiny dip switches?

When coupled with the Neuro Hub, the Vertigo features full MIDI capability. You can connect up to five One Series and Soundblox 2 pedals in 128 multi pedal scenes, recallable via MIDI program change messages. Eventually, you will be able to program the One Series pedals through the Hub software, just like you currently can modify the Soundblox 2 series.

The Neuro Hub connects to any Source Audio expression pedal, Hot Hand 3 Wireless Effects Controller or third party TRS (Tip Hot) expression pedals to control to any adjustable parameter. It also provides another way to synch your tremolo with external MIDI clock messages. Players with MIDI systems and pedal drawers will Review: appreciate that with the Neuro Hub they will soon be able to program patches offering specific Vertigo sounds and perfectly synched tempos for each song.

All this technology would be for naught if the pedal sounded sub-par. Fortunately, the Vertigo sounds terrific: despite its digital genetics the pedal sounded warm, analog and amp-like. Between the three toggle positions, the Shape knob’s waveform options, and the depth control, I could enjoy this tremolo as a basic hardware pedal and still get a plethora of cool sounds. Or, I could enter the Neuro world where I could access pre-programmed filtered trems, alternate rhythmic patterns, and other useful sounds. I enjoyed being able to easily create my own Leslie-like tones and whacked-out pitchy sounds and can’t wait to see what further goodies can be created when the full computer editing system arrives. Given its great sound and enormous versatility, the Vertigo is already a steal at the price—even with the extra cost of the Tap pedal, it is less expensive than many boutique trems. You owe it to yourself to check it out if you are in the market for a tremolo pedal.