Some of the coolest looking effects out there come from the British company Rainger FX. Their latest, a sidechaining pedal, is more typically-shaped than their usual fare but still reflects their creative graphics and off-center sensibility.

Sidechaining is a popular effect in modern recording. It can be used subtly, as in sidechaining a rhythm guitar with the kick drum, so that each time the kick drum hits the guitar volume dips slightly, or more intensely in dance music, to make the signal completely disappear with each kick drum beat. The Rainger FX Deep Space Pulsar ducks your instrument’s volume in this manner, creating a choppy effect similar to a slicer like the Boss SL-20.

The Boss pedal relies on MIDI or tap tempo to sync with a drummer playing to a click or backing tracks. The Deep Space Pulsar can also have its tempo determined by tapping—through plugging in Rainger’s “Igor” tap tempo pad (included), or through a control voltage (CV) pulse sent to the same input.

Where this pedal veers off radically is through its ability to take its tempo from the drummer by miking the kick drum with a microphone (also included) plugged into the Pulsar. This allows the tempo to flow with any fluctuation in the drummer’s time, should a click track not be employed.

The “Dip” knob adjusts the amount of dip to the signal, while “Rel” controls the speed of the release, or how quickly the sound returns. The “Vol” knob lets you compensate for loss in overall level due to the ducking. A cool LED display gives a visual indication of the amount and length of ducking.

I plugged a Strat into the Pulsar and then ran it through my pedal board into a Supro Comet. I soon found that the proximity of the input for the tap switch/microphone to the ¼” guitar cable input jack makes it impossible to plug in certain ¼” cables and the tap switch (or mic) simultaneously. Eventually, I found a guitar cable with an end small enough to allow both.

First, I tried the Igor tap tempo switch. Igor can be used on either side of its disc. The shiny side is best for playing while standing, as it requires more pressure to work. The rubber, soft side makes it easier to tap tempo while sitting down. With a little practice, it was simple to accurately match tempo to drum loops. 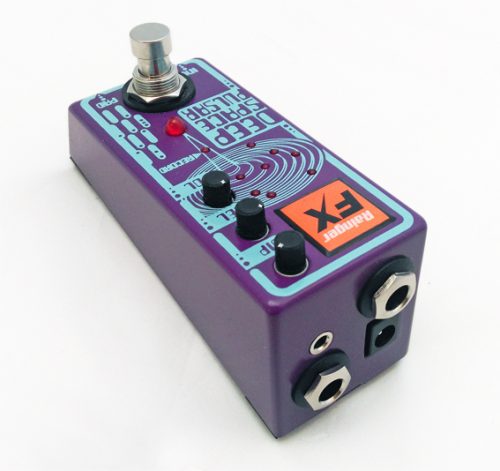 There are no subdivision options, but one workaround was running the post-Pulsar signal through a delay to add additional pulses. Pressing on Igor for one second erases the tempo, letting you to start again at a different tempo, or you can just tap in a new tempo mid-tune by retapping. The LEDs indicate the current tempo, even with the effect bypassed, so you can tap the tempo.

The mic system worked best when it received a strong signal. If your drummer has a weak foot, you could insert a preamp between mic and pedal. If he or she has a lead foot, there’s a Pad button to alter the sensitivity of the microphone. When properly set, this method of synching works really well. Even complex bass drum patterns were tracked accurately. I found that using the “Inv” button to invert the effect, so that no guitar sound was heard until the kick drum hit, provided a tighter synch. That said, with a little knob twiddling, the pedal revealed a wide range of cool slicing effects. 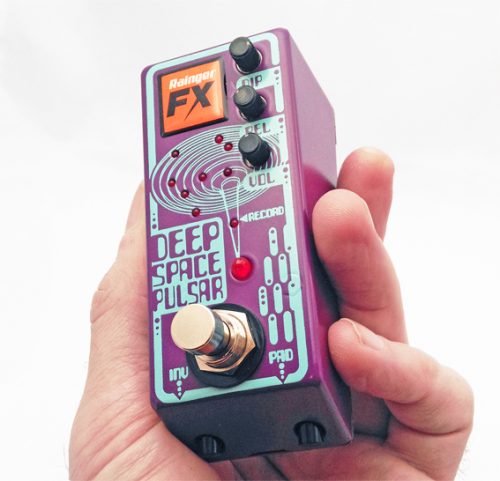 The Rainger FX Deep Space Pulsar is a specialized pedal, but one that is right in tune with the sound of modern guitar. It makes an effect formerly achieved only in post-production easily accessible live. It takes up minimal pedalboard space and at 139 GBP (roughly $185) is reasonably priced; especially considering it includes Igor and the mic (perhaps, a new band name?). There are other pedals that will produce similar effects, but if you want to achieve these kinds of synchronized sidechained effects and don’t want to take a laptop on stage or use a click, or mind running a mic cable back to the drum riser, well, there isn’t any choice: you need the Rainger FX Deep Space Pulsar.