When I started employing a laptop with my guitar, it was restricted to just those two items: guitar into the laptop into a PA. Not long after, I struggled with using the advantages of the laptop—plug-ins, looping—in conjunction with my pedalboard and a guitar amp. The

results were spotty, and required bringing and setting up bulky interfaces and multiple cables. The new OMEC Teleport from Orange Amplification promises a more elegant solution.

Touted as an audio interface for studio and gigging the Teleport is a studio-quality USB recording interface that fits inside a guitar pedal. The pedal acts as a universal connection device compatible with iOS, Android, MacOS or Windows devices without the need for any specific drivers or software requirements. It comes with a USB cable for computer use, but requires the separate purchase of an Apple Camera Kit to connect with iOS devices, or an OTG for Android devices. It converts analogue audio signals to digital enabling them to be processed with any of the many applications available, including Jam Origin’s MIDI Guitar, as well as the supplied AmpliTube CS Orange Edition from IK Multimedia. 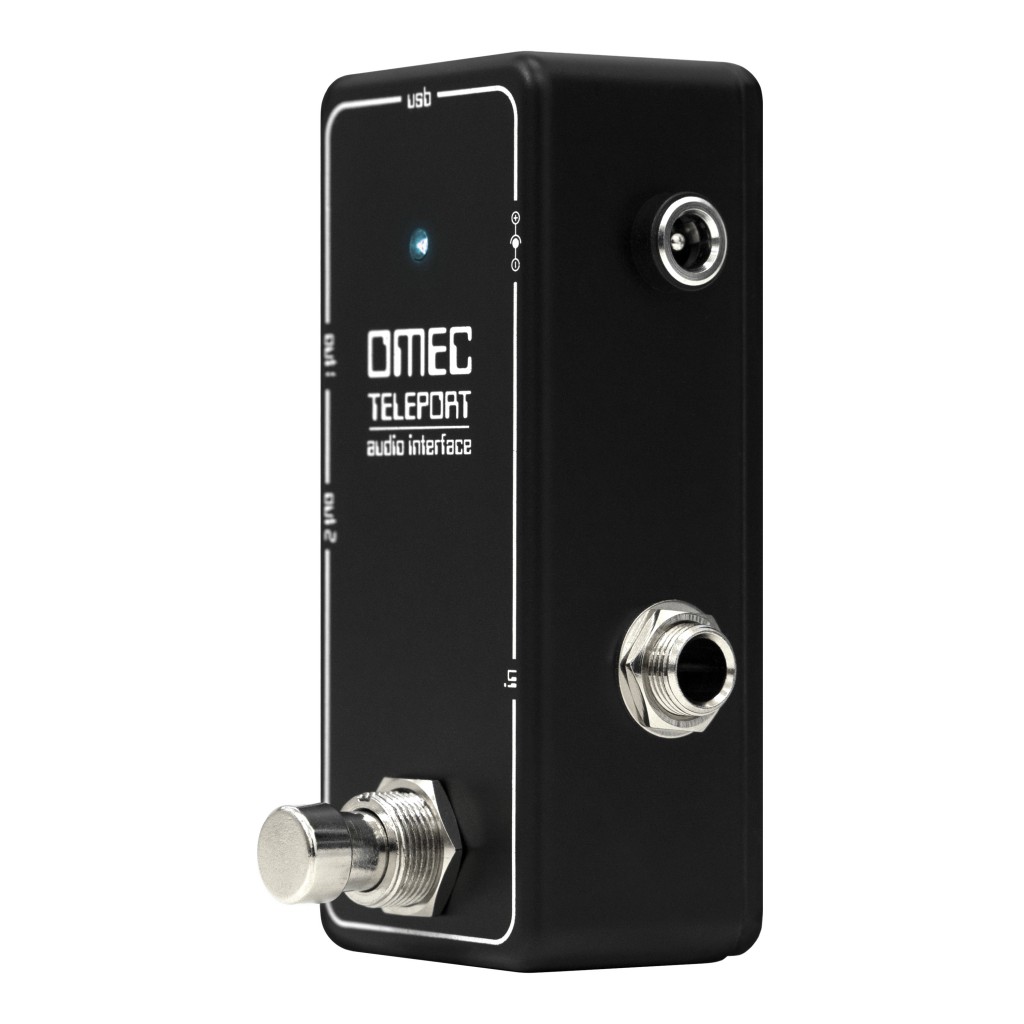 Mono in, stereo out.

The OMEC is powered by a standard 9V adaptor (not included) and cannot be USB powered.

I popped the OMEC out of the box, plugged the guitar into the pedal, the pedal into the laptop and it was immediately recognized by Ableton Live as an interface. I hooked the input and a single output into a send and return in my pedal board and was ready to go. Using the send and return placed the OMEC’s buffer after the Trombetta Feederbone fuzz at the start of my chain, to avoid any loading of the fuzz input. 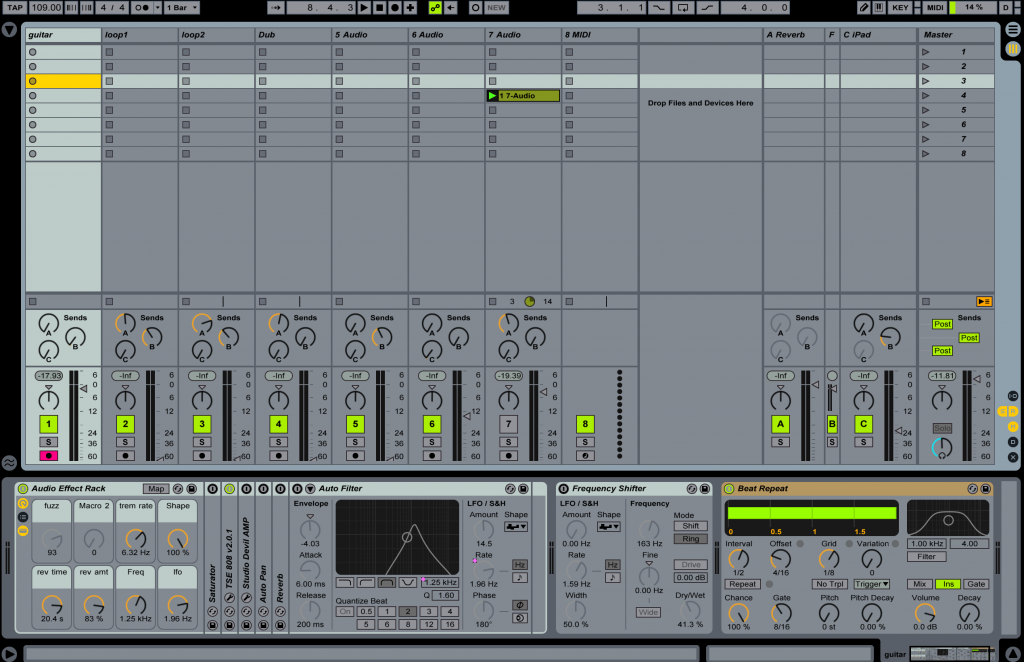 In bypass mode, there was virtually no tonal difference, save perhaps a tad more high end from buffering the signal. Once engaged, I adjusted Live’s levels to produce unity gain. Set at 64 samples, I detected virtually no latency. Of course, how many and which plug-ins you can run at that sample rate will depend on the power of your laptop and the CPU needs of the plug-in, but I was able to run Live’s terrific sounding reverb and two of its loopers with no problem on a 2015 MacBook Pro with a 2.2 GHz Intel Core i7 processor and 16 GB of memory.

Live’s Saturator plug-in made a nice fuzz, especially combined with TSE Audio’s terrific 808 emulation. I had to keep an eye on the low end put out by the Auto Filter, as I was running into a Supro Comet with one 10″ speaker, run at 6-watts, but it was big fun adding it’s unique effects to the signal.

Players like Eivind Aarset and Dan Phelps, who employ laptops as part of their rig, usually run the laptop signal to the PA or separate, powered, full-range speakers. To do this with the OMEC you will have to split the signal before the pedal’s input. It led me to wonder how hard it would be to add a direct through to the Orange pedal. Still, using the right separate solution would let you choose your signal from guitar alone, guitar plus laptop, or just laptop.

I was anxious to move on to the exciting world of iOS apps, but first had to buy a Camera Kit. I thought the iConnectivity, USB to lightning cable might work, but it only works with the iConnect.

Once plugged into my iPad, I was able to create granular processed loops in iDensity and Borderlands, as well as affording myself of all the looping and processing power of Samplr. Samplr and iDensity don’t let you monitor the input signal as you are creating the loops, so I used all the apps in the AUM audio mixer app. This let me monitor my direct signal as I created the loops as well as setting levels for the various processors. 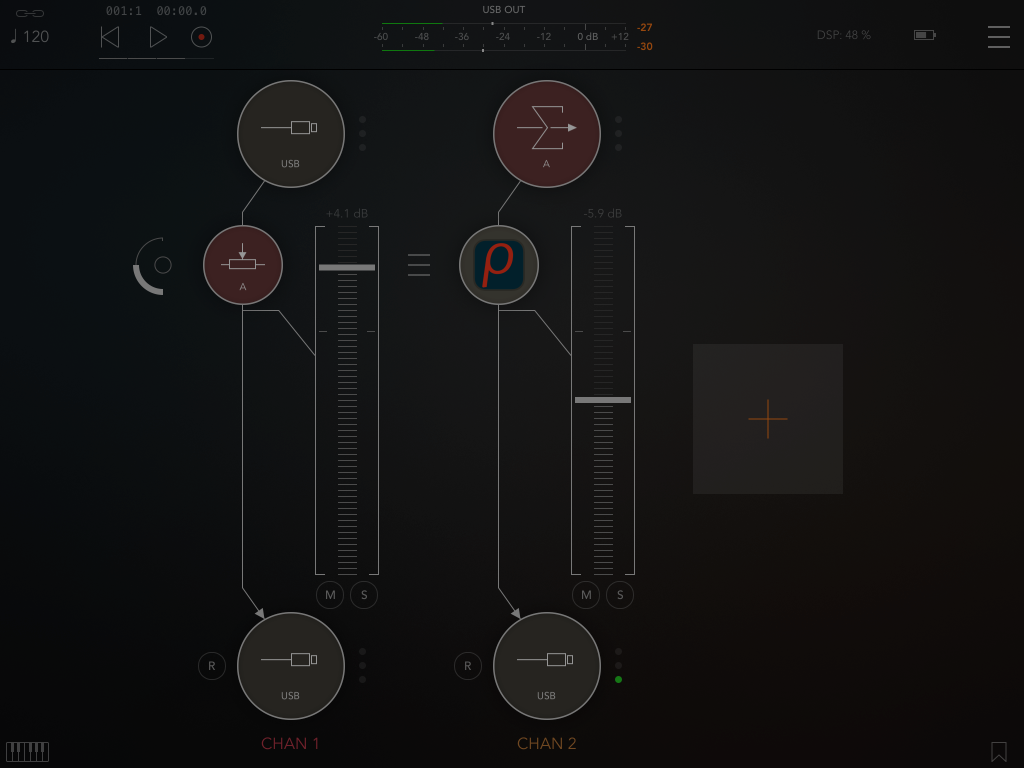 Orange’s OMEC Teleport pedal delivers on its promise of affording guitarists (or bassists, or anyone else) the opportunity to integrate laptop and iOS effects into hardware pedals or use it as a stand-alone quality interface. And, it does so in a compact, elegant, reasonably priced fashion. If you are a modern guitarist, you need this winner of the Guitar Moderne Great Gear Award.