Once upon a time, a couple of former Strymon and Line 6 folks got together and started making 500 Series rack modules under the name Meris. Eventually they started producing pedal versions of two of the modules. I saw one of those pedals, the Ottobit Jr.,

demonstrated back in January by Nick Reinhart and Juan Alderete on the great YouTube channel Pedals And Effects. It immediately struck me as potentially a perfect multi-effects pedal for Guitar Moderne readers. As luck would have it, in February, Nick introduced me by email to the Meris people who were kind enough to send one when the review models became available. I dove in and here are the results.

Like the new Source Audio pedals, the Ottobit Jr. is simple and fun to operate on the surface but has hidden depths that take it to an entirely different level. Each control has a basic use and an alternate one. The Sample Rate knob changes the sample rate from 48 Hz to 48 kHz, while it’s Alt Function, accessed by holding down the blinking Tempo LED, sets step one of the sequencer chromatically from an octave down to and octave up, or turns that step off. The subsequent five steps are set the same way with the other knobs. The Filter knob changes the cutoff frequency of Meris’ original ladder-style low pass filter from 96Hz to 24kHz. The Bits knob adjusts the bit depth from 1 to 24 bits (more about this later). The Stutter control changes the play speed and length of the stutter. You can set it to stutter at tap tempo speed, double speed or half speed (changing speed alters pitch), and to stutter one, two, three, four, six, eight or sixteen times. 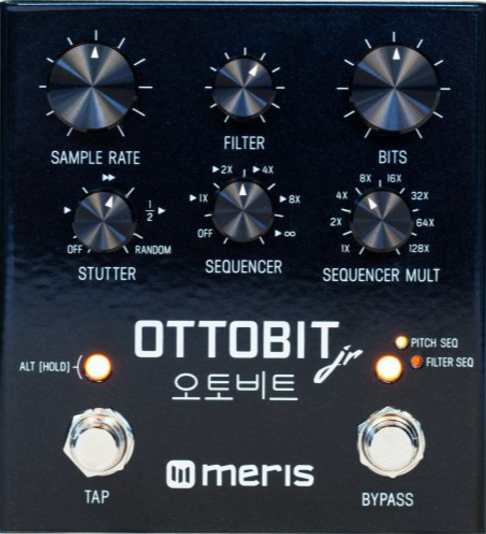 Sequencer Play Mode’s control sets the sequence to play through once, twice, four times, eight times, or continuously. The Sequencer Multiply knob sets the sequencer speed as a multiple of the tap tempo. A small button above the Bypass switch lets you set the sequencer to control pitch, frequency or sample rate.

The Tap Tempo switch sets the speed and the timing of the Sequencer and the Stutter. Holding it freezes the stutter’s buffer. You can also play something with it already held down and it will capture that. Unlike the Red Panda Particle or the EHX Canyon pedals, once a stutter is set, you need to release the switch to capture a new note.

Ottobit has a single ¼” input, along with right and left outputs. Global Settings mode allows you to reconfigure the mono input to a TRS stereo one. Global Settings also lets you: kill the dry signal if you are using Ottobit Jr. in a parallel effects loop; switch the expression input to work with a pedal, an external tap switch, a preset switcher, or MIDI control; set the input for line or instrument level; change the bypass to buffered or relay; set MIDI to out or thru; and choose whether the tap tempo is preset-specific or global. 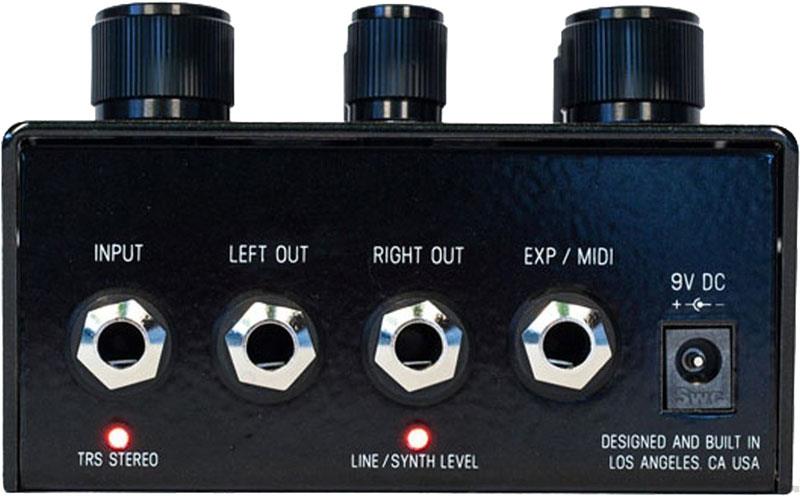 By now you have probably figured out that this pedal is deep (you can download the manual for more details), but the most impressive thing about the Ottobit Jr. is the quality and fidelity of the sounds. I started with everything off and then began by testing one thing at a time.

The bitcrusher effect makes for a cool modern alternative to distortion or fuzz. The Ottobit Jr. bitcrusher works differently than some I have tried. Though it ostensibly shifts the bits one at a time from 1to 24, to my ear, turning the Bits knob from full clockwise to full counter-clockwise worked more like an on-off switch than a knob. The sound seemed unaffected from full on to about two-o’clock, where the effect kicked in and the volume dropped, increasing as I continued to turn it counter-clockwise. Once engaged, the difference in tone from 11-oclock to full on revealed subtle to almost inaudible differences. That said, once on, the bitcrusher tone was awesome, like a fat nasty fuzz, but with its own character. Whereas most bitcrushers kill the guitar signal rapidly as the string vibration slows and the input signal weakens, the bias on this bitcrusher has been treated differently to allow tons of sustain. This was a great call for this unit as it allows you to sweep the filter or run the sequencer as the bitcrusher keeps the signal going.

Speaking of the filter, sweeping it with an expression pedal proved a welcome alternative to traditional wah-wah filtering (see my video), adding a more synth-like quality to the sound.

The stutter options allow for everything from setting up rhythms to utter sonic mayhem. When using it rhythmically, I discovered it was important to wait for the stutter to complete its cycle of two to 16 repeats before attempting to retrigger. Also, there is a buffer-filling period after you step on the switch before the stutter begins, though tapping in a very rapid tempo can make it seem almost instantaneous. It is hard to explain how much fun it is to hold down the stutter/tempo switch to freeze the Sutter, and sweep through multiple parameters with the expression pedal—including changing the stutter settings.

This only scratches the surface of what the Ottobit Jr. can do. The next level of fun comes with programming in presets and controlling them with MIDI. The only on my wish list for future iterations would be a blend control; it would be amazing to have synth-like sequencing and effects going on behind clean arpeggios or power chords. For now you can achieve that with a Pigtronix Keymaster switchable effect loop or something similar.

The build quality of the pedal is exceptional and the price reasonable when you consider you are getting at least four effects in one. At post time the Ottobit Jr. is out of stock, indicating the excitement about this effect. Watch the Meris website, as they should be available again soon and you don’t want to miss the next run. If there was ever a pedal that deserved a Guitar Moderne Great Gear Award, the Meris Ottobit Jr. is it.