There is a wonderful world of effects out there, but maximizing their usefulness often requires modifying parameters on the fly—think Whammy pedal, or runaway delay feedback. Unfortunately, modifying parameters, and even engaging or switching off effects, tethers you to the pedal in a way that can hamper your visual performance.

There have been solutions: In 2014, Livid came out with Guitar Wing, which I covered in Guitar Moderne. It allows control of MIDI effects parameters right from the face of the guitar, unchained from pedals and standard hardware controllers. Source Audio’s Hot Hand, covered here, also permits free-ranging parameter control, either through MIDI (using the Neuro Hub), or through an expression input on the pedal or switching device. The folks at GTC Sound Innovations have come up with yet another solution that debuted at NAMM a couple of years ago and I recently got to put it through its paces. First watch the GTC folks demo some classic effects.

The Revpad system consists of one base unit and one controller pad. The base unit permits up to eight effects per preset and up to 200 presets. The Revpad, which attaches to your instrument through a pair of easily removed Velcro dots, can control eight parameters simultaneously. Through MIDI and USB ports on the base, the pad can also be used to control external gear, MIDI devices, and VST plugins. Onboard effects include: Overdrive, distortion, compression, fuzz, boost, filters, pitch, chorus, wah, delay, flanger, reverb with hold, gate, harmonizer, vibrato, tremolo, looper, dive bomb, slicer, and more. 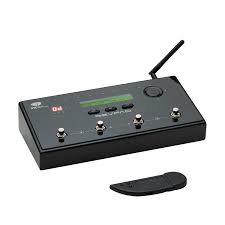 I was impressed by demos at NAMM and on YouTube, and was pleased to get one in house to see if it might be useful for more Avant sounds than previously demoed.

Setting up the system was relatively easy, though the manual could be clearer. It also took some time to get used to turning the scrolling wheel without pushing the adjacent arrows, but once this was mastered it was simple to modify presets or create new ones.

Unfortunately, the recessed power switch on the pad is tiny and difficult to get at with fingers. Though the base is built like a tank and the pad seems to be made out of durable material, the switch broke when attempting to use a small screwdriver to turn it on and off. Maybe put a larger one on the bottom of the pad where it is not likely to get shut off by accident? GTC sent a replacement, and I was soon enjoying the various effects I could create by touching the pad.

Using the hold function, combined with the unit’s lush delay and reverb, I could play notes or chords, place them in hold mode and play lines over them. Again, there are pedals that will allow this (EHX Freeze, Superego, and Superego Plus, to name but a few), but with the Revpad, you can roam the stage while doing this.

Also cool was the unit’s vibrato effect, which I could add to the end of lines by touching the pad. I found it very different from finger, or whammy bar vibrato, and very expressive in its own way. Using the pitch effect, I could touch the pad in various places for random pitches, a weird vocal effect unobtainable with a pedal.

With the Revpad, I could filter EBow lines as I played them, without having to use a wah or filter pedal.

I could also set the unit to only allow sound through when I touched the pad. This gave the EBow a flute-like attack.

Chaining pitch, slicer and delay effects to only play when I touched the pad, added another flavor of chaos to noise-based dissonant note playing

As you can see from my video, done after only a brief time with the unit, all these techniques would take some practice to fully integrate in a playing style. It would definitely be worth the effort if you wish to be freed from the tyranny of having to stand near your pedals. In addition, the GTC Revpad Wireless and Multi FX Unit has the potential to create sounds, impossible to produce with standard stomp boxes.

At around $645, it is pricier than the Livid or Source Audio products alone, but when you factor in the cost of the laptop and/or external hardware effects you would need to add to those products, they seem comparable values. So if the concept appeals, take your Xmas money and grab one.