If you are a guitarist, odds are at some point you will have to play through an amp not your own, whether it is a backline rental for a fly-date, another player’s rig at a jam session, or the available amp at a rehearsal studio. This situation can be problematic: suddenly you are faced with a sound and/or dynamic response that makes simply playing, let alone creating, difficult. More and more pedal companies are coming up with effects to use as an intermediary between your guitar and this strange amp to help sculpt a sound you can live with. The Empire dual-preamp overdrive pedal is one such effect.

Big Joe Stomp Box Company developed the Empire in collaboration with Nashville session veteran Paul “TFO” Allen. Allen drew on years of road experience in designing an effect to, among other things, cope with the issue of “other-people’s amps.” The Empire ($319.95 List $259.99 Street) comes with two channels that can be used independently or combined to turn a single channel amp into a four-channel one: pedal off, Channel A, Channel B, or both.

Its adjustable buffer/line Driver can compensate for pedalboard signal loss and/or act as +15db clean boost. Both channels have a Sponge/Firm function that allows customization of the touch-sensitivity. Channel B sports a simple Tone knob, while Channel A offers instead Body, Attack, and Presence knobs. An A/B-B/A switch lets you change the signal flow, driving Channel B with Channel A or vice versa. The Empire’s all-analog true bypass (unless you engage the buffer) circuitry runs on a battery, or 9-, 12-, or 18-volt power supplies. 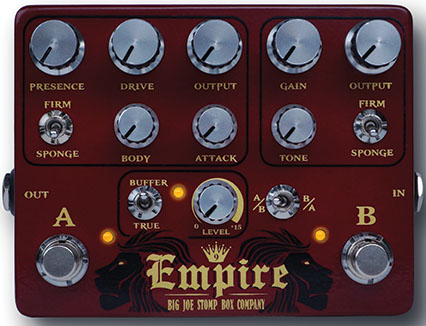 Plugged into my Fender Blues Junior, the Empire improved the tone immensely. A Blues Junior serves as a decent clean platform for pedals, but is not an amp you really want to break up. The Empire gave me the slight give of an amp being pushed, at any volume I cared to play. And this is another issue guitarists deal with: even our favorite amps might not start sounding great until pushed to a louder volume than the venue permits. Through my terrific sounding Little Walter 50-watt head, the Empire let me get some sag without turning up past conversational levels.

Both positions of the Sponge/ Firm switch were usable; the Sponge was not too flabby nor was the Firm too taut. At higher volumes, where the amp itself was offering up some sag, the Firm setting came in mighty handy to keep the sound from getting muddy.

Channel A seemed to have a bit of a midrange hump regardless of the tone stack settings, whereas B was more transparent. Neither channel alone gets into much more than overdrive gain levels, even at their highest dirt settings (mysteriously called Drive on Channel A and Gain on B), though at top settings each delivers a nice crunch. Run together, some hard rock tones were on tap, even through a clean amp, while adding the preamp turned full up created some serious distortion.

Sending A into B versus B into A revealed very different sounds, as did adjusting the relative outputs, making for an extremely versatile device. It should also be said that this pedal plays well with others, whether emulating a slightly driven amp when placed after a Keeley Katana overdrive, or beefing up a main.ace.fx Awdrey-Gore fuzz.

Throwing this in your bag, or placing it last on your pedalboard chain could save your sonic soul on gigs where you encounter strange (sometimes very strange) amps. But don’t discount the Empire for everyday use, right up front on your board, as a killer dual drive.