The Modify knob controls the behavior in various ways depending on the mode. In Classic and Barber Pole modes it acts as a tone control for the modulated signal. In Through-Zero, it controls the delay time for the unmodulated dry signal; this sets where in the LFO cycle the through-zero point occurs, which is where you’ll hear the most drastic cancellation.

In Trigger Up and Trigger Down, it is a sensitivity control for the sweep, while in Step and Random modes, it adjusts the glide between steps.

The Activate footswitch allows momentary or latching operation. The Tap/Trigger footswitch functions differently in different modes. In Classic, Through-Zero, Barber Pole Up, Barber Pole Down, Step, and Random modes, it is a tap tempo control. In Trigger Up and Trigger Down modes, it triggers the effect momentarily whenever it is pressed.

Playing starts at around 4:30

I found the best way to unlock the secrets of the Pyramids was to plug in, set the pedal in Live mode, and start twisting knobs. One of the first things I noticed was that, while Mix may seem a simple blend control, in full effect mode the output of many frequencies is considerably louder than unity gain. Fortunately, the Modify knob can be often be used to tame any speaker straining low end.

Which brought me to my second revelation: Pyramids’ knobs are extremely interactive, making the number of cool sounds available on this pedal infinite. A slight turn of any knob created a new, highly usable, sonic texture.

At that point, I realized how important it was that EarthQuaker decided to make this its first pedal with presets. Once you find one of the slew of evocative effects Pyramids is capable of producing you won’t want to lose it. Pressing and holding the Activate footswitch while you press and hold the Tap/Trigger footswitch can store presets. You turn to the preset number in which you wish to store the sound and release the footswitches. Five presets seems like a practical amount, but there are so many great effects here you may need to buy a second pedal to have ten.

I have always thought of flanging as a retro sound, recalling Sixties psychedelia, Seventies Andy Summers, and Eighties metal, but after having this pedal for almost a month I realized, while I am able to access all the traditional sounds, I am also able to create a wide variety of new and thoroughly modern noises as well. Sci-fi sounds, metallic clangs, dance music sequences, they are all here. 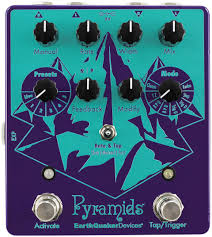 Did I mention that in Trigger Up/Down modes, you can re-trigger the flanger using an external source through side chain flanging? To trigger Pyramids using an external source, you just plug the instrument to be flanged into the right input and connect Pyramids’ right output to your amplifier or DAW. You then connect the external trigger source (drum machine, sequencer, or CV) to the left input. To hear only the affected instrument signal (as modulated by the external trigger source), you leave the left output unconnected. To monitor the trigger source, you would connect the left output to a separate amplifier or DAW input.

As is always the case when EarthQuaker decides to tackle a classic effect, they have come up with a unique take, firmly seated in the musical world of the present and the future. I can’t wait to hear what creative, modern guitarists will do with this pedal.