Ryan Fiegl is not into heavy self-promotion, but he did send in a picture of his rig. With a little detective work, I discovered he is in Denver Colorado, and does both epic, ambient solo looping and interesting improv with a trio. You can garner some more info at his website, and from his description of his rig. 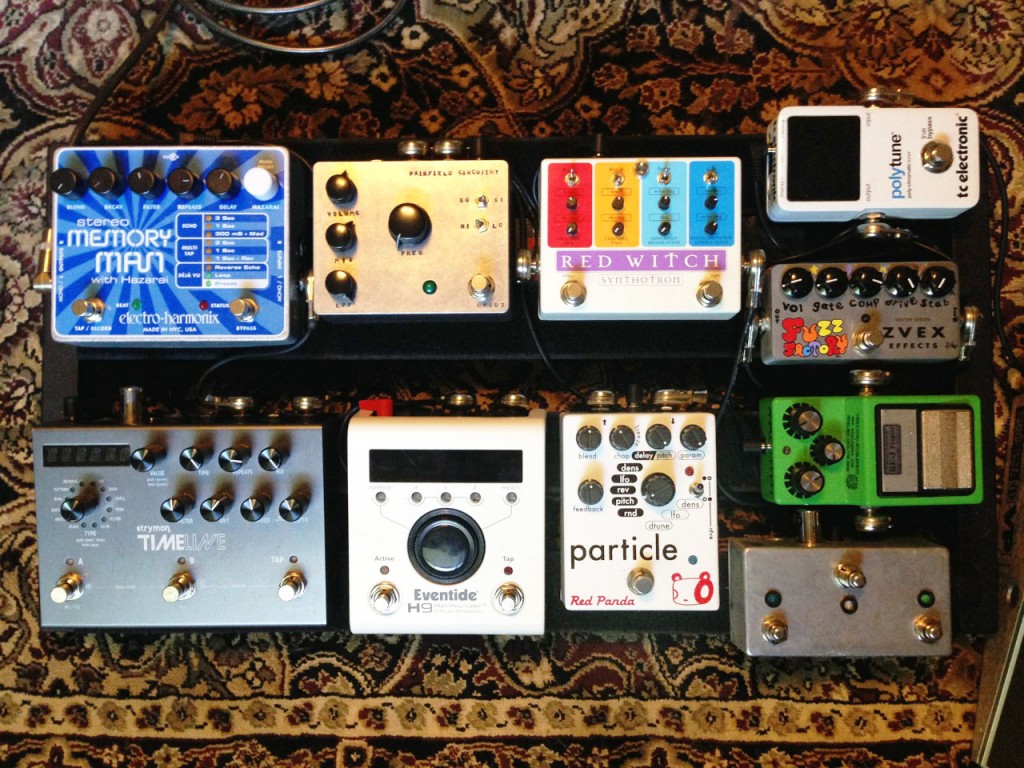 I don’t like to dig too deep into my past when it comes to how I got where I am now but the short answer is I went to school for music as a classical guitarist/composer, did that for about ten years, after grad school started playing electric guitar and have since taken to all of the varieties that I can fit into and hope to keep doing more and more different things as I go from here.

The Amp I use most is a Lord Valve Napper. Hand built by the local mad amp scientist “Fat Willie” Whittaker, it’s a Deluxe-like power rating in the size of a Princeton but with all his “stuff” that he mods and adds on to Fender amps, along with some proprietary this and thats, of which I understand little.

I use a Z-Vex Fuzz Factory for its ability to be unpredictable and weird. The Stab knob is always turned to completely unstable. And with using the Comp and Gate knobs I can dial in some sounds that cut through thick textures without blowing anyone’s head off.

The TS9 is pretty self-explanatory. It’s a Silver Mod from AnalogMan. I have the DRIVE set to full but the level pulled back a bit, more to act as a driven color rather than to push the gain structure too much.

I recently started using the Red Witch Synthotron. Much like the Fuzz Factory I like this pedal for its unpredictability, particularly due to how it tracks lower notes on the fretboard and also what happens when it tries to track polyphonically. I’ve been waiting for the right piece to unleash the Sample Hold function as it is a really unique rhythmic sound but is kind of a one trick pony, so it better be worth it when I finally use it.

Fairfield Circuitry  is one of the coolest pedal makers for the experimentalist. I wish I could own everything he makes. The Randy’s Revenge is a really deep ring mod, not necessarily for the ring mod itself but what you can configure it to do with an expression pedal and sending/receiving control voltage. I don’t use it for that right now; I mostly create distorted Gamelan gong-like sounds with it.

The Particle by Red Panda is becoming one of my favorite things, ever. Essentially it differs from other delays in that it is doing granular process as opposed to time based process. There is so much to say about what it does that it would take a dissertation to explain it and I just mess with it a lot without knowing what it’s really doing, but I mostly use it for drones that evolve over time and glitch effects.

Eventide has broken new ground with H9, it is a guitarists dream for how flexible and tweakable it is especially when combined with its iOS control. Like the Particle, there are just too many things that it does and I use it kind of on the fly a lot of the time and play with whatever comes out of it. It’s great for huge soundscapes or adding subtle reverb but is also a synth and modulator. That does create some issues, sometimes in the same setting you wish it was in 3 different locations on your pedalboard.

I think the most pivotal box I use is the Strymon TimeLine . I’ve had it since the week they were released and I’ve used it more than anything I have had or currently use. I have it set up to do three things: common delay sounds including reverse and slice-interval stuff, near-infinite repeat soundscape sounds, and extreme things that can often get out of control and quite scary. I haven’t been using the weirdo stuff for some time now, it really is for the more experimental stuff I do and I just haven’t been doing that much. The TimeLine is also my main phrase looper, controlled by a Disaster Area MIDI controller, which I had some custom firmware made for.

At the end of the chain is an EHX Memory Man with Hazari. This is mostly used as a lens. In film or photography they might call that a filter but that has a whole other meaning in the electronic sound world. What I mean is sometimes you just want to shade everything in a hue of color or wash it out with bright, overbearing light and that’s what I do with it. But also having a second looper allows for one to function as ambient/soundscape textures and the other one as a focal point or rhythmic thing. It also helps to be after the TimeLine for me to move loops to the Memory Man and manipulate it there or create a new one on the TimeLine, but I haven’t been doing stuff like that for a while now.

My solo project is really very pedal-centric and was using a larger rig with two pedalboards and two amps. While I still want that to be what I use if I have the chance to, the reality is that I need to be simpler for things that I’m practicing now for later this year within ensemble settings. But I have been trying to fit what was originally on the larger set up on the current board, it’s just a pain tearing apart and reassembling boards all the time.