Experimental guitarist Joel Gilardini is based in Zurich, Switzerland. His projects include experimental doom-metal, ambient loops, and industrial-noise. His music has been lauded by Eraldo Bernocchi, Nik Bärtsch from Ronin, and Colin Edwin of Porcupine Tree. He was kind enough to give GM a detailed rundown of his cool rig.

“Let’s start with the live-looping setup. My ambient sets are full improvised, I never prepare or rehearse anything. The only thing I sometimes change is a pedal in the chain, so I can achieve different sounds, depending on my mood.
The core of everything is a Looperlative LP1, controlled by an RFX MidiWizard foot controller with an expression pedal for the loop volume. I normally use it with five loops synced together in parallel: three centered and two stereo hard panned. I like the Looperlative because you have full access and control over the whole looping process, especially when building up a climax combining different loops.

The signal path is a Schecter 7 String baritone guitar tuned a whole step down to A, into a Boss LS2 line selector pedal, into a Digitech Drop pitch shifter pedal, an Iron Ether Xerograph Deluxe filter pedal (w/ exp pedal). The signal then goes into an EHX Superego, a Dunlop MiniWah, a Digitech SynthWah, a Zoom MS100 Multistomp, and then into a Yerasov PteroDriver or a AMT SS20 valve preamp, into a Boss PQ4 parametric EQ pedal, into a Zoom MS70 Multistomp, into the Looperlative LP1 and finally out to the PA.

I also use an EBow, a slide, and a Cymbow.

I use the Boss line selector pedal to switch between the guitar and a Dronin. The Dronin is a one of a kind instrument loaded with a Piezo pickup, strings and springs. I use it to create drones, santoor or cymbalom like dulcimer sounds, and percussion sounds.

The Dronin is treated with a high pass/low pass filter unit I built myself. The unit I built was custom made for Eraldo Bernocchi.

The guitar is also peculiar: I have rewired one pot as a push-push switch, which turns on two Piezo pickups mounted inside the electronics hole. That way I can use the guitar as a percussion instrument, a lo-fi acoustic guitar, or as a kalimba if I play the strings behind the bridge.

Occasionally, I will use different kinds of small noise synths on Return 2 of the LS2, like a Bastl PolySynth, which I like since you can store and recall up to 18 sounds.

I always play with setups where my whole chain goes straight into the PA; I rarely use a real amp these days. I like to use a valve preamp like the Yerasov PteroDriver valve preamp (or a AMT SS20) to have a warm amp-like sound. They are actually more voiced for metal and heavy rock, but on lower gain settings they sound great. The Boss PQ4 is always after the preamp to fine-tune the sounds.
I really love the Zoom Multistomps because they are like small pedalboards in a stompbox format. When I play live ambient sets, the Zooms are effective, because I like to have as many sound options as possible. Since I play with a few loops in parallel, I have enough time to scroll through the presets (normally I use seven to eight presets per unit). The MS70 is mainly used for reverbs and stereo delay: its Eventide and Strymon emulations are really good. On the MS100 I have delays, modulations and a pair of special effects like swelling reverbs and an emulation of the Particle Verb from the Line 6 M13.
To fake a deep dubby bass sound I always use the Drop pitch shifter filtered by the Xerograph so I can cut out all the unwanted high end and push the low end. The Superego is used mostly on the Latch setting, and I like to filter it with the Wah and/or the SynthWah, plus add long reverbs and delays. You can get some wonderful soundscapes that reminiscent of Mongolian throat singing.
In the last few years I have greatly reduced the amount of pedals use and I own live. It makes me more concentrated and focused on what I am actually playing.
Now almost everything fits on a Pedaltrain Junior frame. I use some effects, like the filter or a Koma Elektronik Gate Delay, on a tabletop.

I got bored with most boutique pedal makers and now prefer to use common cheap pedals (i.e. the Zooms). In live setups these work flawlessly and sound brilliant, and I find it more interesting to create weird sounds by combining common effects instead of having a pedal which already does weird sounds.

I have another ambient project called Black Machineries devoted to dark ambient and post-industrial sounds. I use almost the same setup pedal and loop wise, but the main tone generators are synths: Reon Drift Box,1010 Micro Black Death/Dark Interpreter Mater Suspiriorum, the Koma Elektronik Gate Delay, and a bigger Dronin, which is loaded with a huge spring and metal plates.

Then I have an experimental doom metal setup I use with my solo project The Land Of The Snow.

I play tunes and songs, so I need fewer effects to play this repertoire.
The pedalboard chain is: guitar into a TC Polytune Mini tuner, into a Lastgasp Art Laboratories Gomorrah Input Sensitive Subharmonic Fuzz, into a Digitech Drop, a Lastgasp ThunderBox Donsharizer (high and low booster), into an Eventide TimeFactor, then into an AMT SS20 tube preamp, the PQ4, and then the Zoom MS70.
A Boss RC3 loop station is used to play backing tracks. The guitar is a Jacaranda 7-string, a custom model I had built by an Italian luthier. With time, I found myself more comfortable playing 7-string guitars. It became the perfect number of strings for me. I enjoy the extended range of the lower string, which lets you achieve piano-like chords. 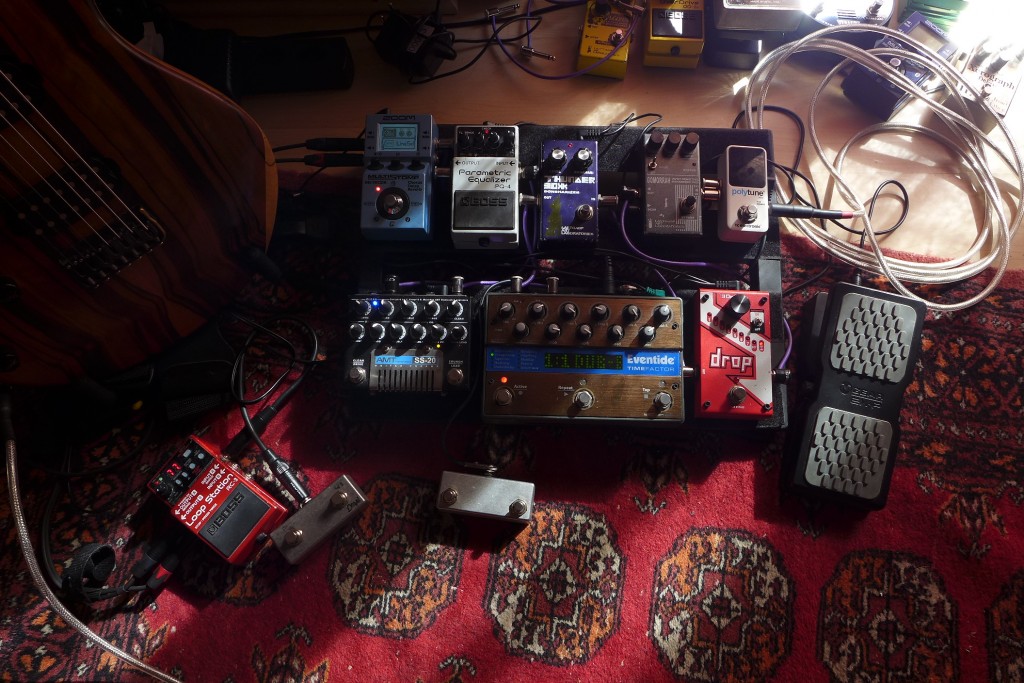 Again, I go straight into the PA, but with this project I use only distorted sounds, provided by the AMT SS20 crunch and lead channels. If I need less gain I kick in the Thunder Box. It is normally a booster with a tone control that boosts both high and low frequencies, but, with the output lowered, I can “de-gain” the sound while keeping a fat tone. I’m using it in reverse.
Since I play a lot of rhythm guitar and have no bass, I use the Drop. I used to use a Micro POG and then I used a EQed PitchBay, but I find the Drop octave down sounds fatter and more accurate than the EHX pedals.
I use the Eventide TimeFactor before the distorted sounds with an external switch to tap tempo and scroll through the banks and an expression pedal to control feedback and other parameters, depending on the preset. I like to use delay and modulation before the gain section. I find the effects meld better with the distortion and sound warmer. I love the decay of a delay through a distortion because the repeats get less and less distorted as they fade.
On the Zoom MS70 I have a preset chain that includes noise gate, spring reverb, and a Line 6 Particle Verb emulation. The first two effects are always on, and I turn on the Particle Verb when I need a bit of ambient sound during the set.

Lastgasp is a pedal company run by a Japanese man who lives in Australia. I love these pedals and have four of his distortions and fuzzes. He builds pedals with noise and industrial music in mind. They can sound really polite and musical too, but if you push them strange cool things happen. The Gomorrah is a fuzz and octave down fuzz with an envelope circuit that mixes in the octave fuzz depending on how hard you play. I use the Gomorrah set more on the sub octave together with the dirty channel of the SS20 (sometimes with the Drop in between), so that when the guitar decays glitchy octave sounds erupt from the guitar. Used with a delay you get a wall of unpredictable noises!