I am just starting to catch up on Reader’s Rig submissions after Summer NAMM (report coming soon) and vacation. Swedish guitarist Anders Isberg has two releases on the Mareld label (Substream Music Group): The Space Within (2013) and A Tranquil Life (2014). He has also done two self-releases: Playing in the Dirt (CD Baby, 2013) and recently Collapsing the Wave (Bandcamp, 2014). His video demos for the terrific Paul Trombetta pedals reveal an aggressive blues-rock technique that occasionally peeks through his more ambient releases.

Isberg writes, “The effects chain in the picture includes: A PTD mini-bone fuzz, and below that, a PTD Burning Sensation germanium fuzz, a Shoe Pedals Robert fuzzdriveand and a Blakemore Effects Dreamsicle fuzz to their left, a Basic Audio Throbby tremolo, a Line6 POD HD, a Boss FV-500H volume pedal, a Strymon El Capistan delay, a Neunaber Stereo Wet reverb, an EHX 45000 Looper and Controller, a Powered by T-Rex Electronic Fuel Tank x2 power supply. I also use a Dunlop 212 Slide and an EBow.”

“From time to time I change the fuzzes, sometimes using the Basic Audio Kay or Zippy, PTD Tornita! KS or Bone Machine GTx, Shoe Pedals Plume, Ghost Effects Sounds of Today or Dizzy Tone, or the Jimmy Behan Vox Tone Bender. The decision is made from gig to gig.”

“This is a small but effective and versatile rig that I’ve put some thought into. It can be used straight forward as shown in the photo, plugging the guitar into the mini-bone, outputs on the 45000 going directly into the mixing console, using the POD as amp. This is the way I use it on small gigs where there’s no backline—gigs in art galleries, libraries, coffee shops etc. In this scenario the signal is mono until it hits the El Cap from where it’s in stereo. I can also run one of the outputs on the POD going into an amp, while keeping the rest as described above. Playing leads through the amp, while the 45000 loops go through the PA panned hard left and right. I can also disconnect the POD, running the rig in mono or stereo through one or two amps. It all depends on the gig, the equipment available and how much gear I want to carry for that particular gig. I do try to travel as light as possible, though. When I do bring an amp it’s often a Fender Hot Rod Deluxe. My main guitar is a Fender Stratocaster with Lace Gold pickups, but I also use a Strat with P90s and a Blade Tele.” 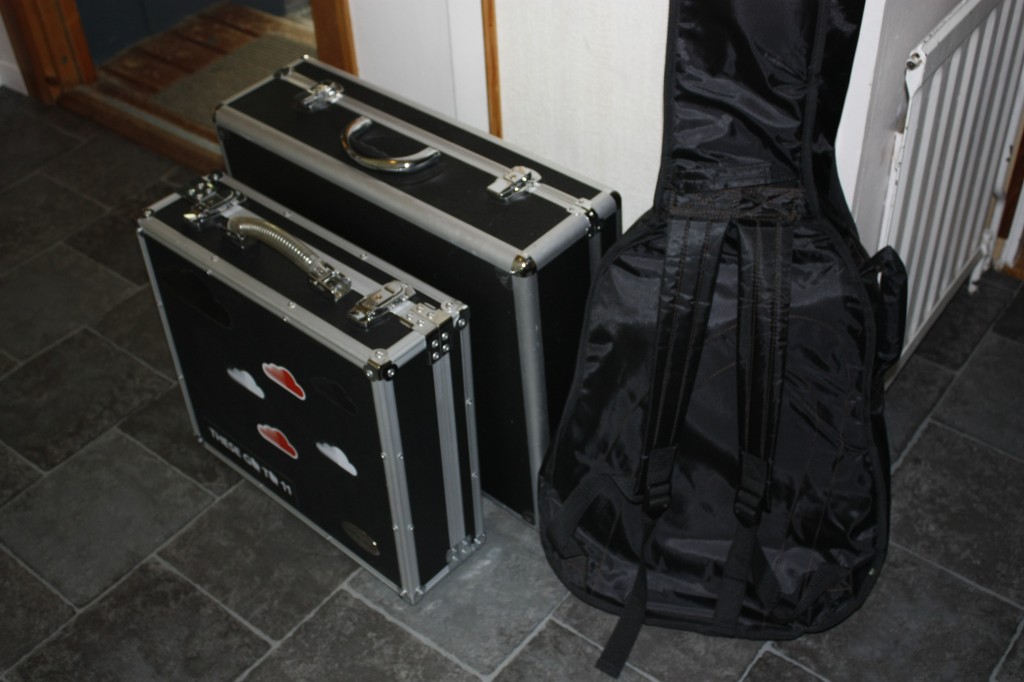 “My goal with this rig has been to keep it simple, but versatile and easy to carry.”