At NAMM 2020 back in January, the worst thing you had to worry about was getting NAMMthrax (or NAMMonia), that is, a bad cold from shaking all those hands. We live in different times now; hope you and yours are healthy.

What this year’s winter show lacked in number of interesting product debuts it made up for in decibels. Complaints were constant about being unable to hear the gear, or talk to the vendors. (You can experience this in some of the videos). That said, there were a few cool releases that should appeal to the modern guitarist. If April seems late for the roundup, consider that many of these products are just now shipping. 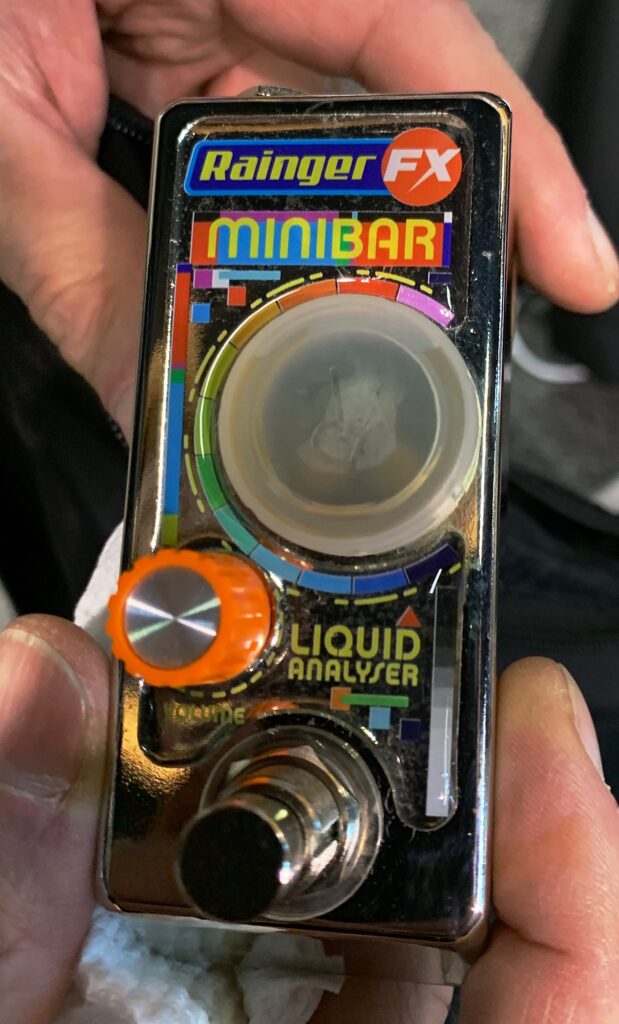 Best in show was easy to pick this year. David Rainger unfailingly comes up with pedals that bear little resemblance to the crop of “me too” products at other booths. This year’s entry was a distortion/fuzz that changes its sound depending on what liquid, or combination of liquids, you place in the removable plastic pillbox housed in the pedal. It appears to be the gimmick to end all gimmicks, until you discover that the fuzz sounds are all kinds of great, when using everything from coffee to motor oil. Yes, the potential jokes are endless and sometimes funny, but it is hard to deny the unit’s unique musical possibilities.

New approaches to reverb were definitely a theme this year. 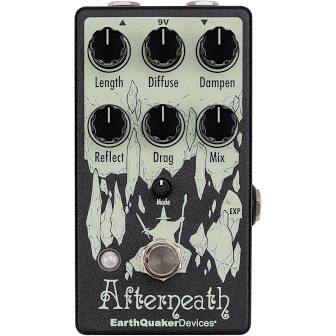 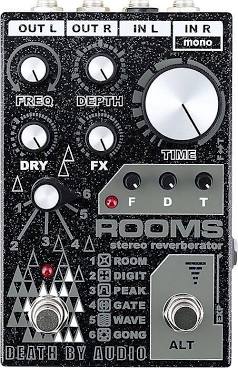 Another new take on this old effect, Rooms is a stereo, multi-function digital reverb with a mixer section that provides independent dry and effect controls over six programmed reverb algorithms Room, Digit, Peak, Gate, Wave, and Gong. This is not your father’s reverb. 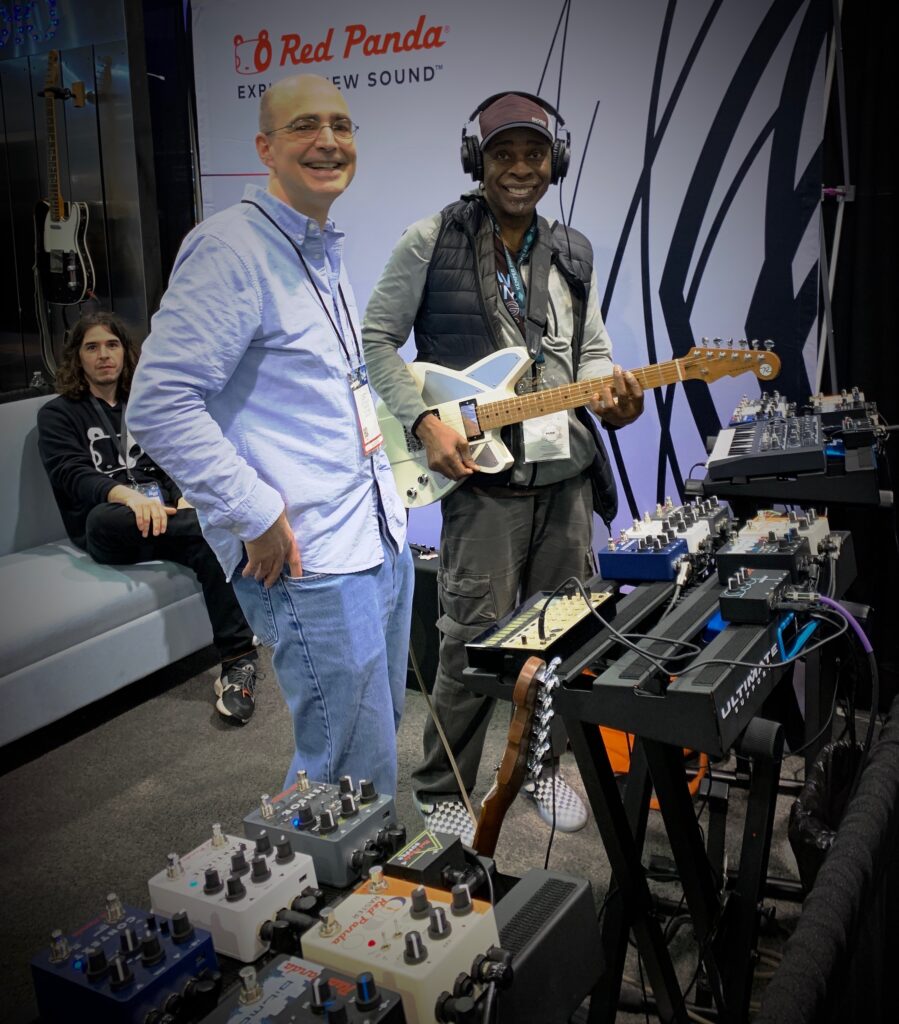 I’ve known Vernon for over 40 years. It was great catching up with him and Curt at NAMM 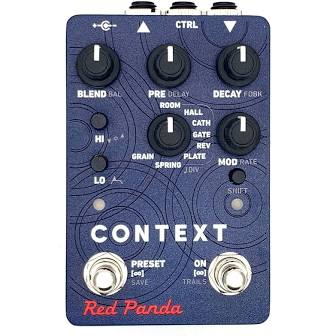 The Context reverb has added three new algorithms, the ability to store presets, USB Midi, and Stereo i/o, Delay is now added to all eight reverb modes. Be sure to check out this video for a picture of how this reverb differs from the pack. Also, Particle 2 is now shipping. 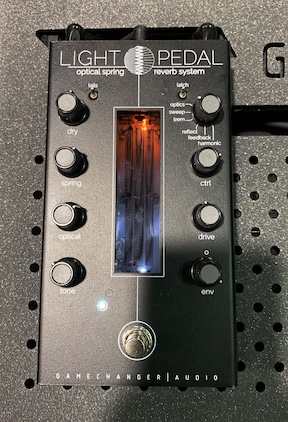 Another unusual reverb, this one works on a series of light sensors. As with all Game Changer pedals it completely rethinks an otherwise typical effect. 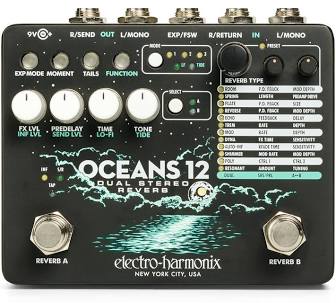 EHX expanded on their Oceans 11 with one that goes to 12. The Oceans 11’s big brother features two simultaneous, independent, stereo reverb engines that can be run in series or parallel, 24 presets, and stereo in/out or mono send/return with pre and post reverb options. The pedal also includes  control over stereo image alteration, Lo-fi, and infinite attenuation; as well as an input jack for external expression, a 3-button footswitch control, but no MIDI.

EHX also showed the Pitchfork+, which features chromatic intervals, 100 potential programs, a “jump” function that lets you jump between programs, and probably more. As it doesn’t appear to be available yet, info is scanty. 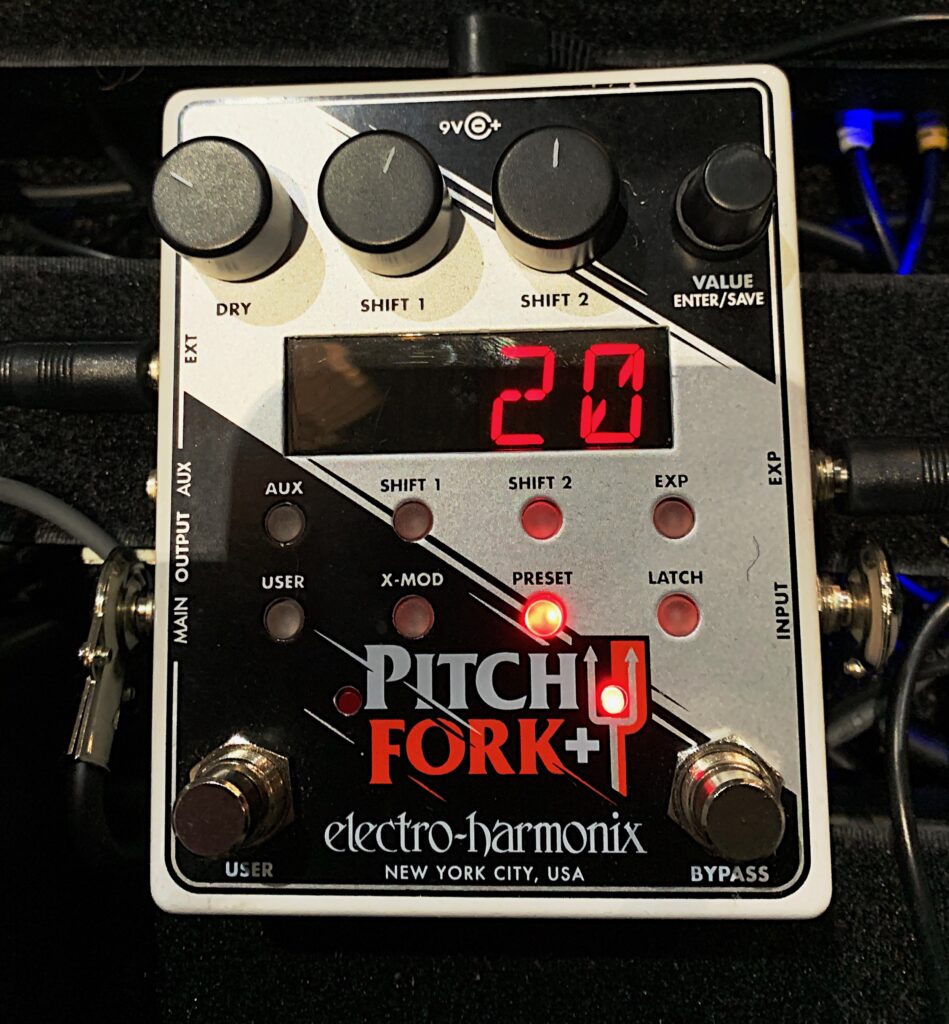 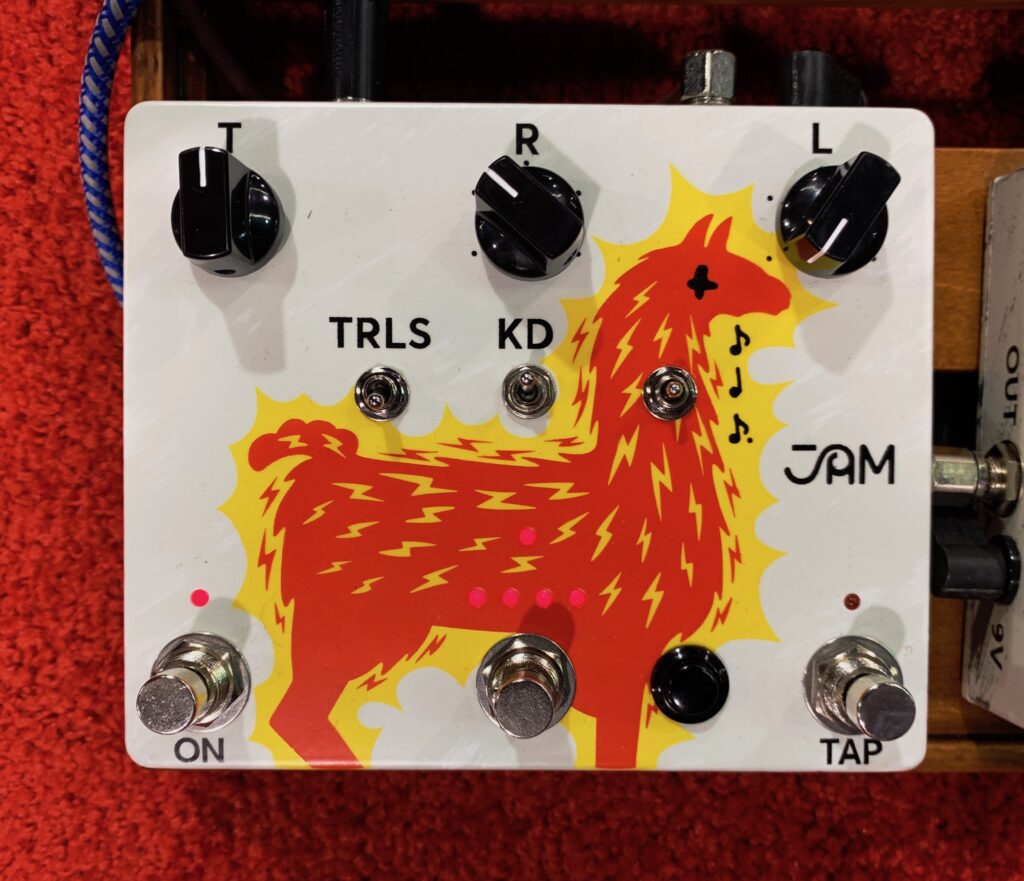 From the original, small, simple analog delay pedal, the Delay Llama has grown into an Xtreme version that offers the same gorgeous sound but adds digital control for some extreme effects, including vibrato and sequencing. 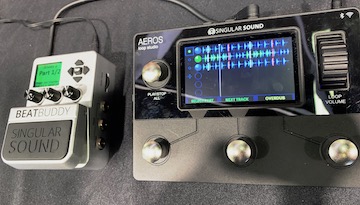 From the people who brought you Beat Buddy, comes an advanced, well thought out looper, that is almost a portable, foot controlled DAW. A silent click track can be sent out to your in-ears or your drummer’s. This is an amazing bit of kit for song style performers. I would love to get one in and see how it translates to ambient, non-time-based looping. 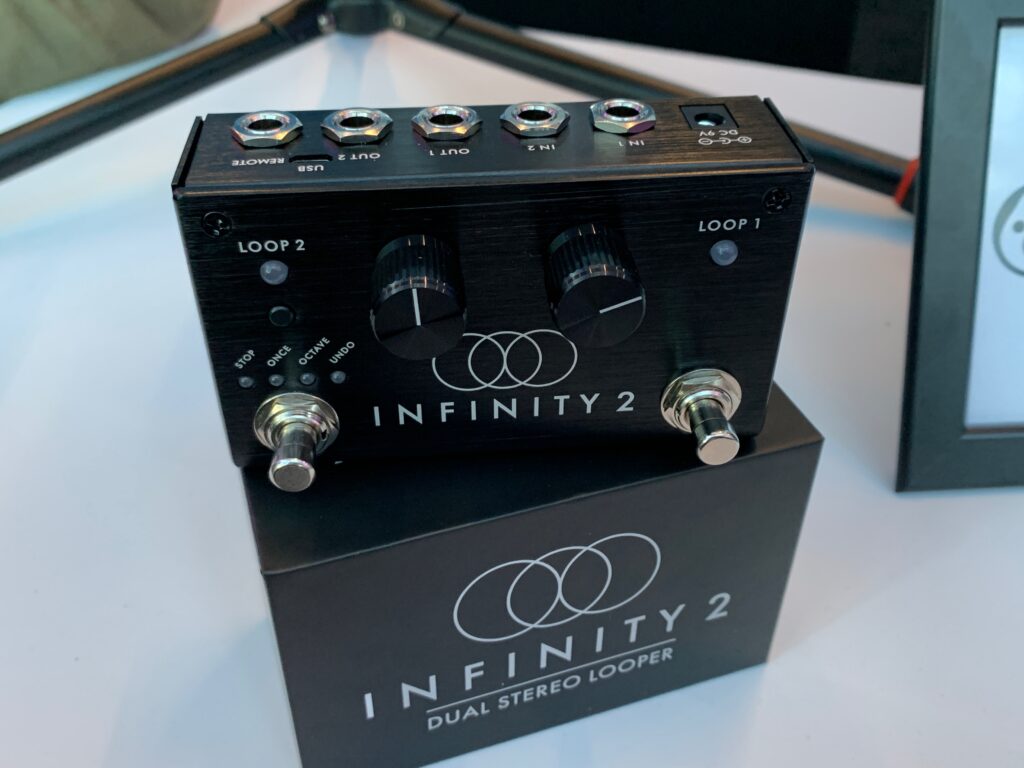 Much simpler and less expensive than the Aeros, this smaller version of the Pigtronix Infinity Looper, nevertheless offers a surprising amount of functionality in a small, elegant package: two independent loops, stereo ins and outs, wet/dry capability, half speed and more. Look for my review in Guitar Player magazine. 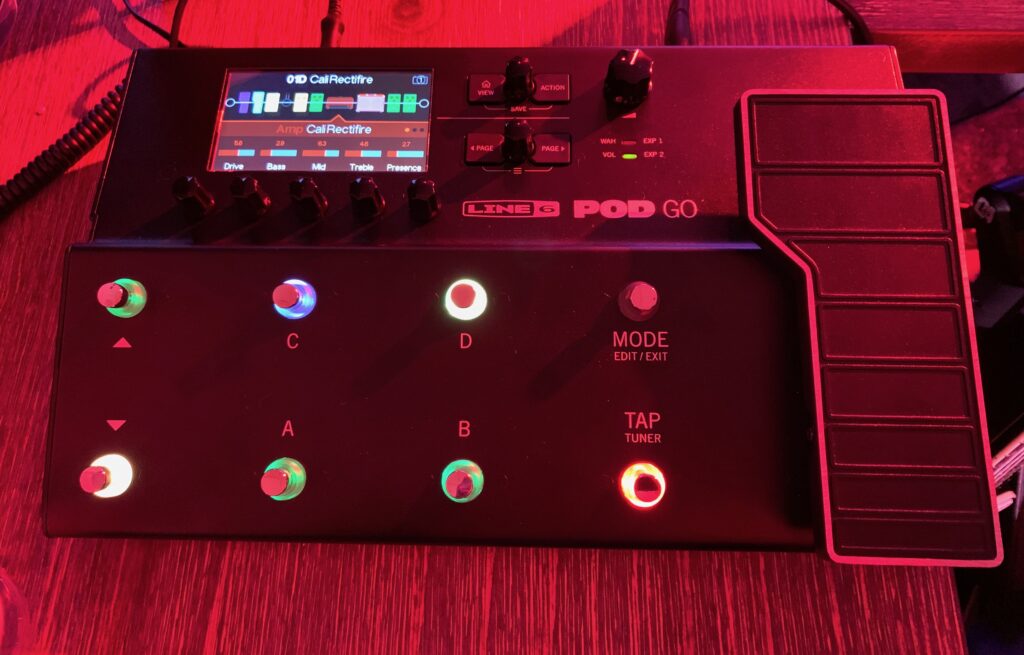 For those who would like the excellent HX modeling in a compact, affordable package, Line 6 unveiled the POD Go. Look for my review in Guitar Player magazine. Spoiler alert–it sounds great.

If there was a trend in the guitar world it was the growing number of companies offering instruments that are headless, fanned fret, extended range, or all three. Championed by modern players like Plini and Tosin Abasi, these guitars are becoming more and more widespread. 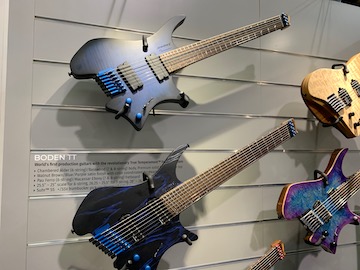 One of the OG companies of this ilk, Strandberg unveiled a Plini model as well as their own pickups. 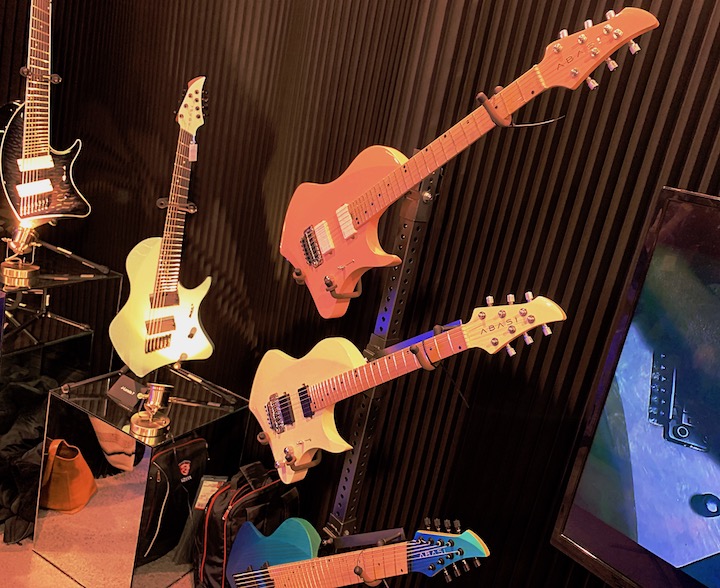 Though Abasi’s beautifully designed guitars are not headless, they are extended range and feature fanned frets. The Animals As Leaders, er, leader showed his new Abasi Concepts line at NAMM 2019. The Japanese version finally went into production this year and is already sold out.

Claas guitars are custom built and were featured in the boutique area of the show. They feature their own upscale take on the headless, etc., design. 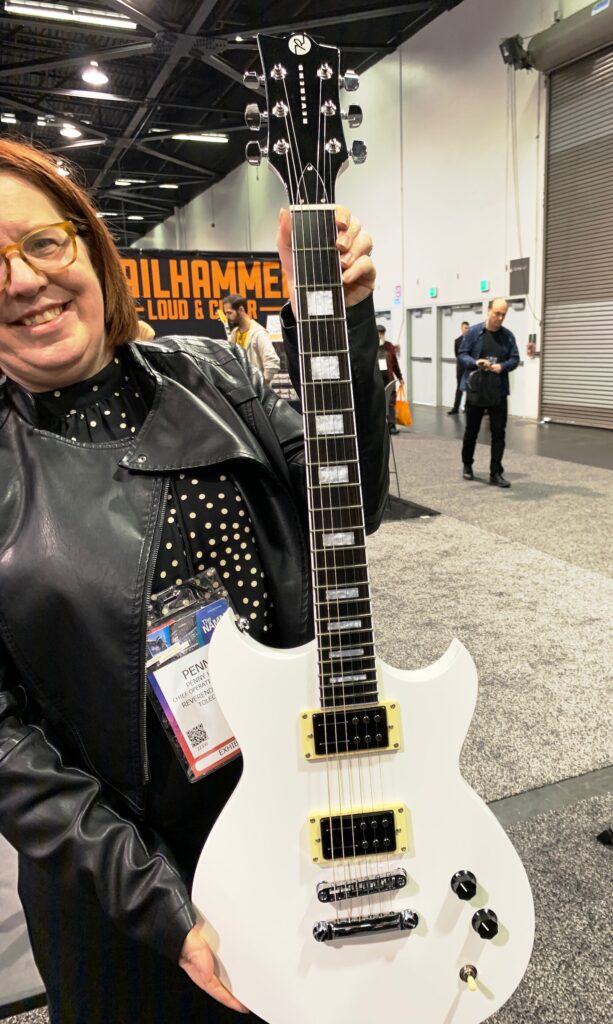 Reverend always goes their own way when it comes to guitar design, making them a welcome respite from the rampant, Fender and Gibson copies. This year they also have a signature model for Robin Finck, guitarist for a legendary modern rock band Nine Inch Nails. 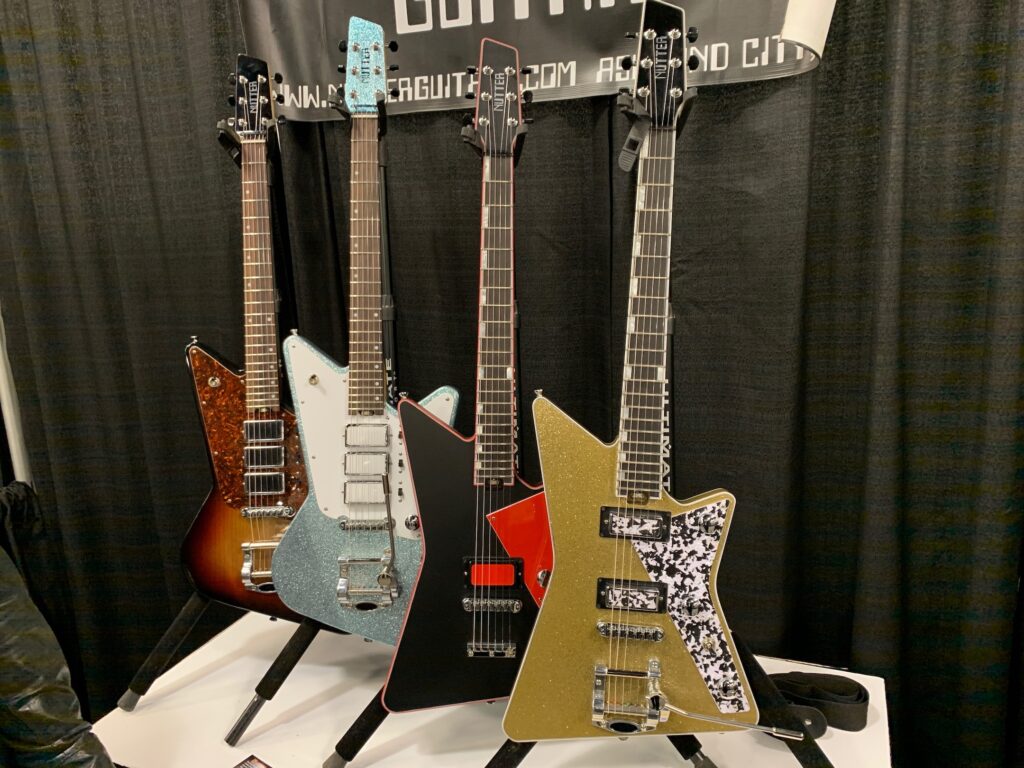 Brian Nutter again showed some great looking instruments in his own inimitable style at NAMM. He unfortunately developed serious health issues shortly thereafter. In this fraught time everyone needs help, but some more than others, so if you can help out here is his GoFundMe link. 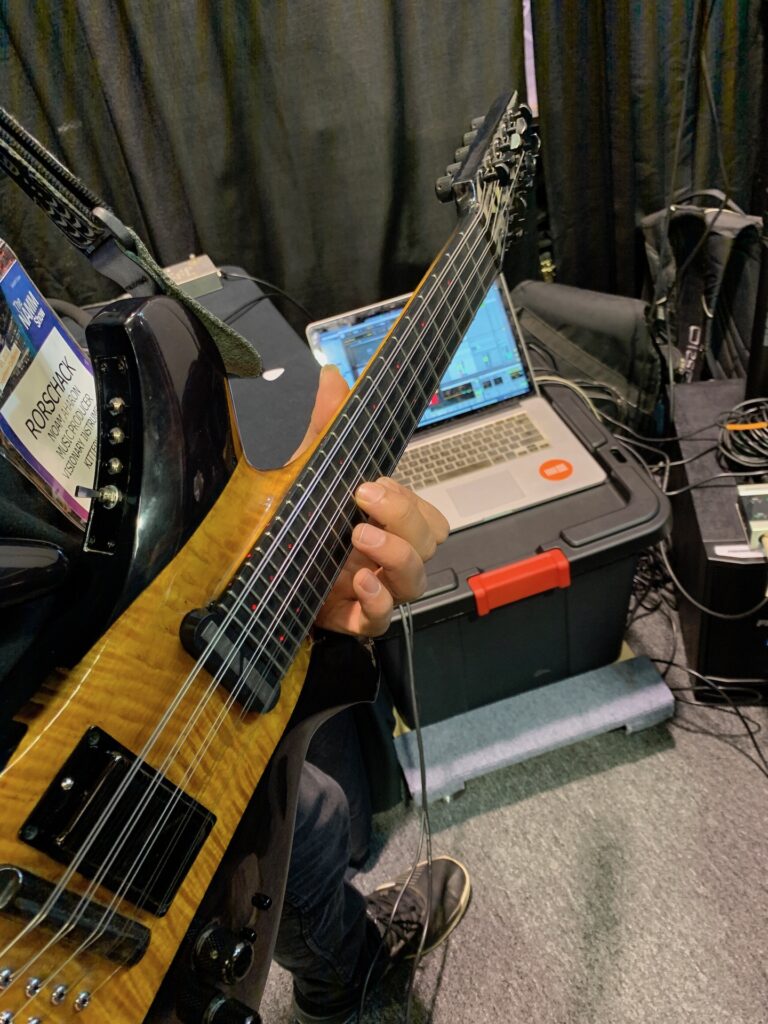 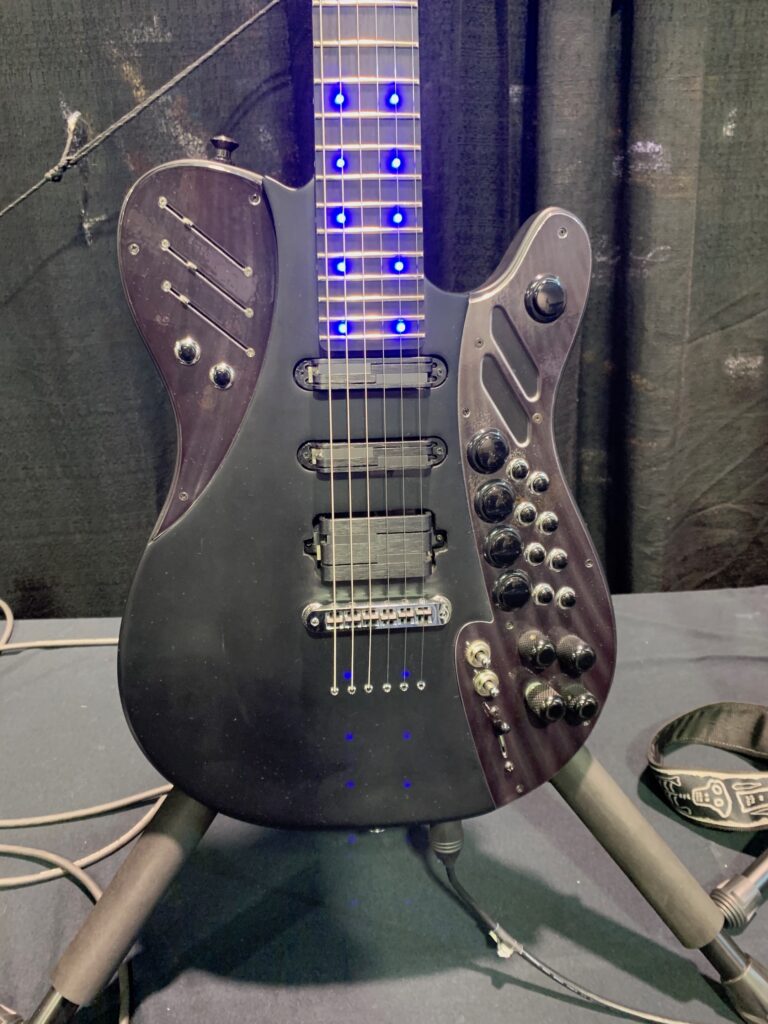 Ben Lewry was one of the people behind the technology that became the Guitar Wing. He is currently constructing custom guitars with MIDI control capabilities built in, including a MIDI whammy bar.

This is what an acoustic guitar from future might look like. It sports one-piece injection molded technology and weighs 3.7 pounds. FreeBoost Technology on the L2 pickups uses rear surface of the guitar as a speaker complete with reverb, delay, and chorus, all without an amp. At $800 it is not cheap. It is based in China and distributed largely through Amazon, but it is great to see something truly new in the acoustic realm.

Gibson had a wall of one of the OG modern guitar models: the Firebird in amazing custom colors. 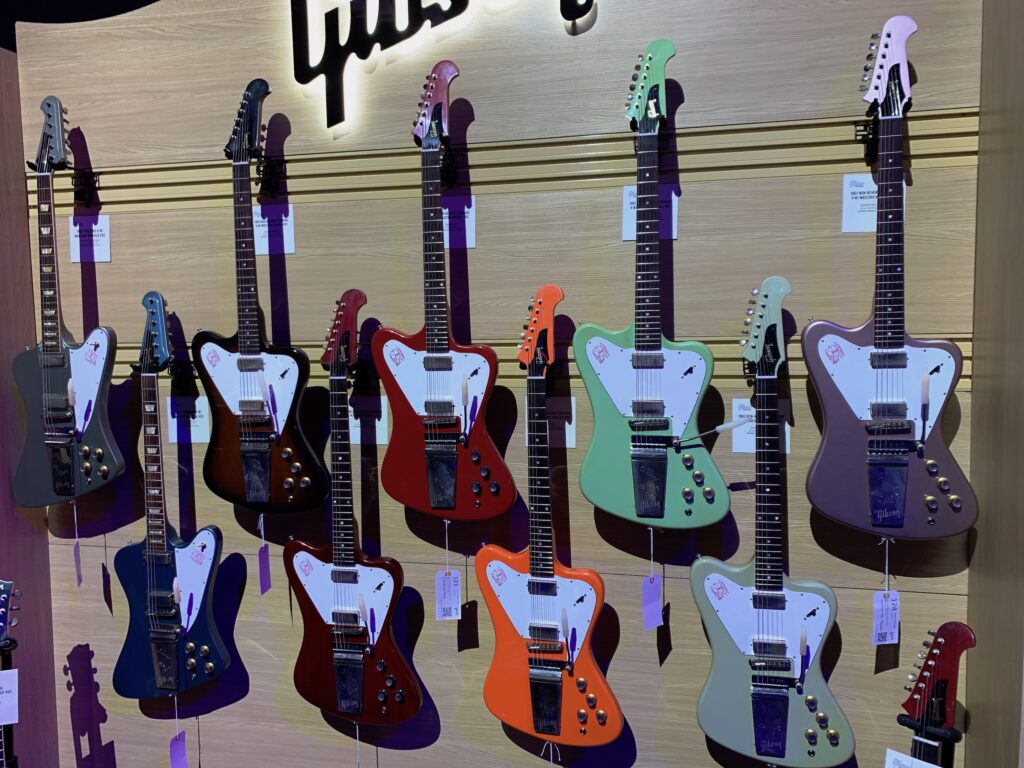 Another interesting looking instrument was from Hu Tonelabs 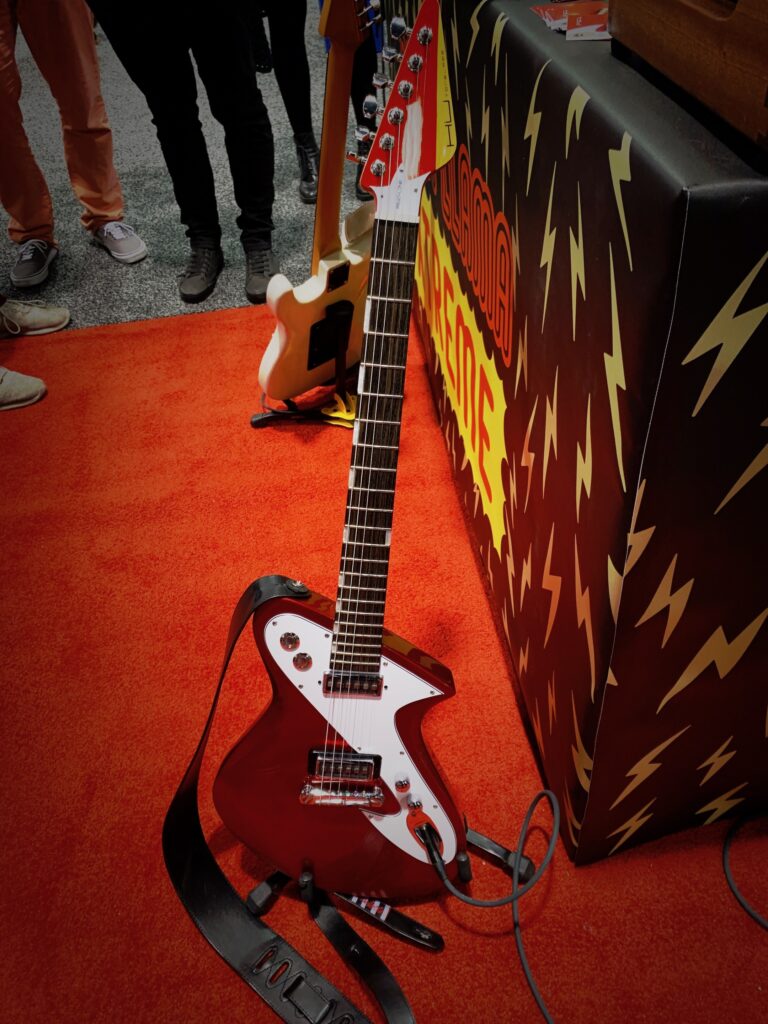 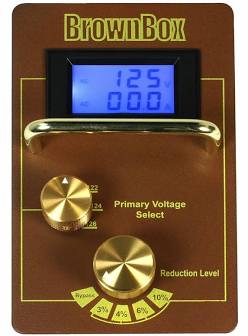 I don’t know about where you live, but in Nashville the power coming out of the wall in clubs and houses can be significantly higher than what a classic tube amp requires or is happy to see. This can cause everything from rapid tube wear to breakdowns. That is why you will often see pro players in Guitar Town using a Brown Box, which lets them reduce the power to the amp to more friendly voltage. There is a European version available. 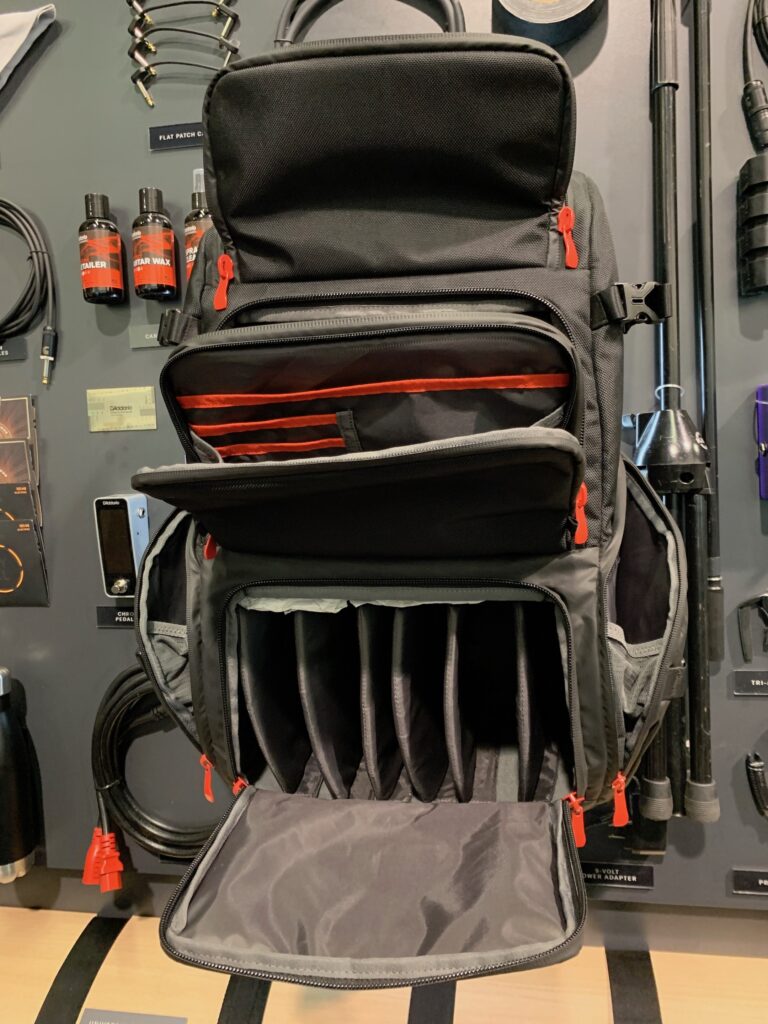 The famous string company has completed the reintegration of Planet Waves into the D’Addario brand, but still offers the same brilliantly thought-out, useful products for guitarists of any kind. This year they showed an accessories bag with dedicated compartments for all the things you (or at least I) normally just throw in a bag, or gig bag, as well as  a mic stand accessory that any pro can use.

Summer NAMM has officially been called off. As the tendency of companies waiting for NAMM shows to release new items has apparently waned, I will try to post interesting new products as they appear throughout the year.

Still, NAMM is always a fun time, so here’s hoping that by next January the worst we will have to worry about will be once again be NAMMthrax.