The 2013 Winter NAMM (National Association of Music Merchants) show had the most palpable excitement of any NAMM in the last five years. Whether from the rising economy, or because with the death of record sales, musicians need more instruments to play live, who can say? The bottom line is: this show was alive with fantastic new technology, much of it of special interest to the modern guitarist. There was way more than I can cover alone, but these were the products I found most interesting. Read on for words, pix, and vids of this year’s extravaganza. Keep in mind that NAMM unofficially stands for Not Available Maybe March (or May), so check the company sites for shipping dates.

Perhaps the most exciting news for guitar adventurers was Moldover’s controller instrument: the Robocaster.

Visionary Instruments luthier Ben Lewry  and controller/guitar master Moldover have created a hybrid instrument. The Robocaster merges controller and guitar in a new design that enables you to play MIDI enabled guitar effects, right from the face of the instrument.

A plethora of faders, touch strips, arcade buttons, motion sensors, and a spring-loaded joystick have been ergonomically arranged on the face of an electric guitar. It includes a class compliant USB controller (no drivers to install), and is compatible with all major computer operating systems and MIDI compatible music software.

The Robocaster comes with custom templates for NI Guitar Rig and Ableton Live. Its Arduino based brain is open-source and hackable.

For an instrument that is handmade and contains such a wealth of electronics, its list price of $2799 seems extremely reasonable.

I was able to play it a bit at the show and can attest to its intuitive and ergonomic nature. It was largely controlling Guitar Rig’s Whammy effect, as well as either Guitar Rig or Ableton Live filters, reverbs and delays. Whether playing set interval jumps with big arcade buttons, doing whammy effects with the joystick, choosing reverb or delay with the Gibson-like toggle or filtering the sound with the ribbon controllers, everything lay easily at hand.

It cries out for  a sustainer so you could play clean notes and chords while manipulating effects. Since it is custom built you can ask Visionary Instruments about installing one, or just add enough distortion to make it easy to play notes one handed while controlling effects with the other.

I have had the chance to buy the various Eventide “Factor” series pedals I reviewed at accommodation prices and have passed them up. They are all amazing, but even at a discount, it was more money than I wanted to spend on a device that offered only a couple of sounds I could see actually using on a regular basis—Enter the H9 .

The H9 features a simple, one-knob user interface and also connects wirelessly via Bluetooth to iPods, iPhones and iPads for creating and managing presets, live control and in-app algorithm purchases. H9 Control will also be available for your PC or Mac via USB.

At roughly the same price as a single Eventide stomp, this one is irresistible.

Their loopers and synth-guitars are, of course, old standards, but Boss has dropped the ball a bit in recent years when it comes to innovative effects. At this year’s NAMM, BOSS stepped up to the plate and announced three compact pedals featuring, what they call, Multi-Dimensional Processing (MDP), which analyzes audio signals in multiple dimensions and applies appropriate effects to each. Two were especially interesting:

The TE-2 has the distinction of being the100th BOSS Compact Series Model. It produces new ambience effects that combine elements of traditional reverb and delay processing. MDP produces a deep and spacious sound, which spreads left and right in stereo, clearing the middle for your dry tone.  Dynamic sensitivity means changing sounds in response to picking attack. A Freeze function allows you to hold the current effect sound for pads and other effects.

I have loved and used the small but amazingly powerful ZT Amps for a long time. The Extortion pedal is their first excursion into an effect and it is as far from the rest of Fuzz herd as their digital amplifiers are from boutique clones—can’t wait to get my hands on one for a review.

Some video thanks to my occasional employers, Premier Guitar

Reverend is the guitar of choice of modern guitarist extraordinaire Andre LaFosse. This year their Tricky Gomez  model caught my eye. This  wry tribute to Gibson’s Trini Lopez model is definitely on my shortlist for review this year.

Anyone who plays music through a computer needs this.

Also cool was their new, space-saving Orbital Modulator, which offers phaser, flanger, chorus, and tremolo effects in a compact pedal. As with all Source Audio units, parameters can be controlled in real time with an expression pedal or Hot Hand ring. 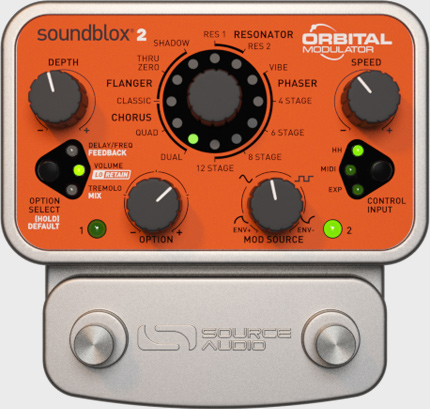 Fishman’s wireless synth pickup was unveiled at NAMM 2012, but it seemed less like vaporware this year. I got a tour of the software editor and it is the most intuitive and easy to navigate GUI I have yet to see in the world of synth guitar. This demo concentrates on emulating instruments and music that has gone before (and in fairness, the demo guy, Burr Johnson, does it amazingly well), but the Triple Play seems innovative enough, in terms of tracking and ease of use, to actually get more guitarists on board, which will hopefully result in some interesting NEW sounds emanating from guitarists’ fingers.

It is mind-boggling how Electro-Harmonix comes up with amazing new pedals every six months for both winter and summer NAMMs. If this series revisits and revises some of their past sounds and effects, these pedals are no less useful for creative guitarists.

What he doesn’t demo on the Epitome is the Shimmer button which places the POG sound into only the wet path of the Holy Grail reverb. When the reverb is set to Flurb (the flanged reverb setting from the Grail) that setting becomes a delay. Combined with the POG in shimmer mode it produces some Eventide pitched delay-type sounds. Also unmentioned is that the 8-step Program has a tap tempo switch.

This is something we have all been waiting for since the Tone Print series came out. Having rock stars offer their favorite sounds was a great intro to the concept, but modern guitarists are inveterate tweakers and we want to get under the hood and make our own sounds. Can’t wait to hook this up to my TC Hall of Fame Reverb.

You say you always wanted a Fuzz Face but didn’t want to use up as much pedalboard space as its odd shape requires? These have promise, offering reduced size and all the mod cons: on/off light, power source input, etc.  Fuzz fiends will debate the sound versus the originals, but I am looking forward to contrasting and comparing the three flavors offered here.

6 thoughts on “NAMM 2013 for the Modern Guitarist”