Guitars and distortion go together like hip-hop and hoodies. All the guitar-oriented software modelers offer astoundingly accurate emulations of classic and modern amp and pedal distortion.

Izotope’s Trash 2  ($249) can be configured to produce warm, tube-like drive too, but that is not what  it is about. From its inception, Trash has literally pushed the envelope of all things distortion, and, as they say in advertising, much, much more.

Izotope’s installations are no muss no fuss; the software installs easily. When you boot up the plug-in in your DAW for the first time, it asks for the serial number; enter that and you are ready to go. (You can install it on an iLock if you prefer). 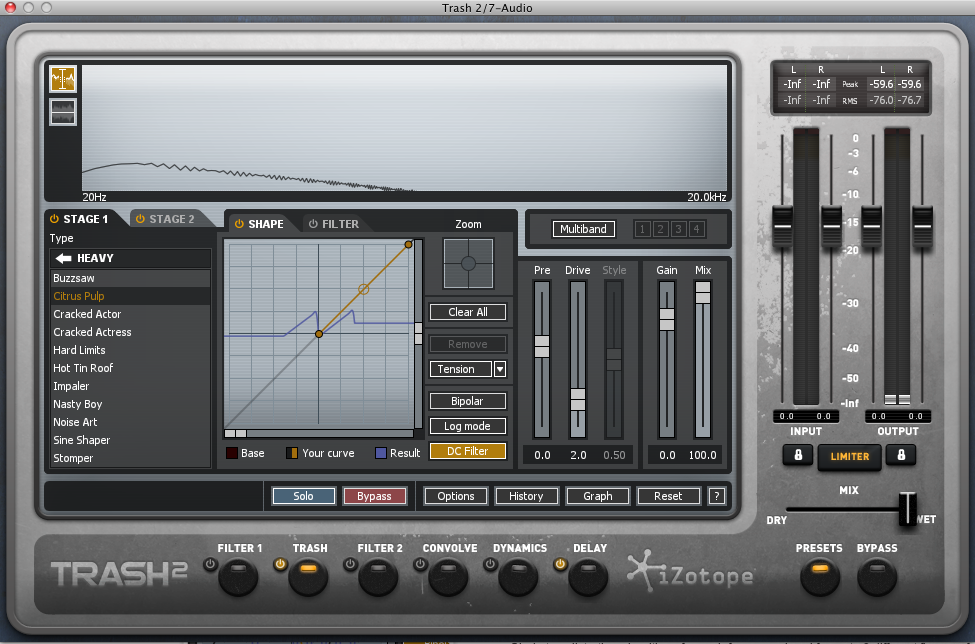 A word: Trash 2 allows very deep programing, so I recommend going through the included presets first to get an idea of the sonic mayhem it can produce. Izotope has wisely included a Limiter at the end of the chain to prevent speaker or ear damage. The limiter is on by default, but you can shut it off at your peril.

When you start modifying the presets, or start building a sound from scratch in the default preset, you will note there are eight big buttons along the bottom, six of which are accompanied by small on/off buttons. Those six access Trash’s effects parameters.

Two of the buttons, Filters 1 and 2—default to pre and post distortion positions respectively, but the six modules can be reconfigured in almost any series or parallel order. Trash is the distortion section, containing everything from mild drive to broken circuit emulations. Convolve offers classic amp type cabinets, a wealth of weird and wild convolution impulses of things like tubes and plastic boxes, as well as things named for animals like Badger or Snake. It also allows you to load your own impulses. Dynamics contains a compressor and gate, while Delay offers a number of different delays, all of which can be “Trashed.”

The Filters and Dynamics can be sidechained and triggered by audio from another track. The right side of the GUI offers input and output faders, a wet/dry mix slider, and buttons to show or hide the presets and bypass the effect.

Trash offers way too many user options to delineate here, so let me just give you my impressions of the software.

Trash 2 has been completely redesigned and I found the GUI more elegant, and more intuitive than its predecessor—despite being highly complex. When I opened it in Ableton Live, the Trash, or distortion module, window opened by default, as did a separate, floating preset window. 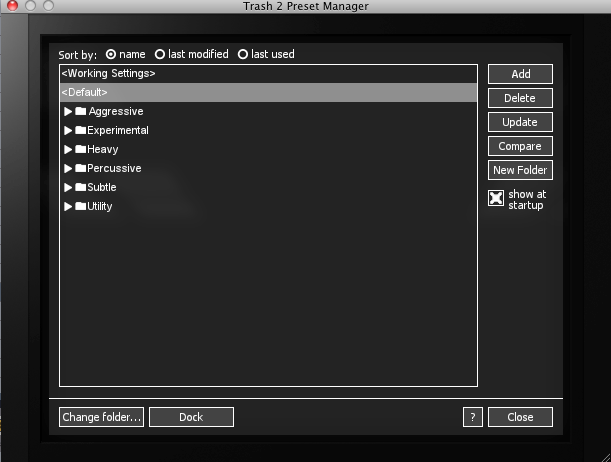 The program opens in default mode, with no affect on the guitar signal. The distortion processing takes place in two stages, adjustable on separate pages, accessed by clicking the tabs. A quick look at the screen will show you why it is impossible to go into all the modifier possibilities here. The box marked “Tension” offers a dropdown menu of six waveform options for each stage. Other boxes are selectable as off and on, and if that is not enough, both stages can be set to multiband and modified differently for different frequencies. Each stage also has an overall frequency control page as well. The sound can be sculpted, as well, by moving points around on the graph. You could easily spend hours, nay days, building one distortion sound—and we haven’t even touched the other modules yet! 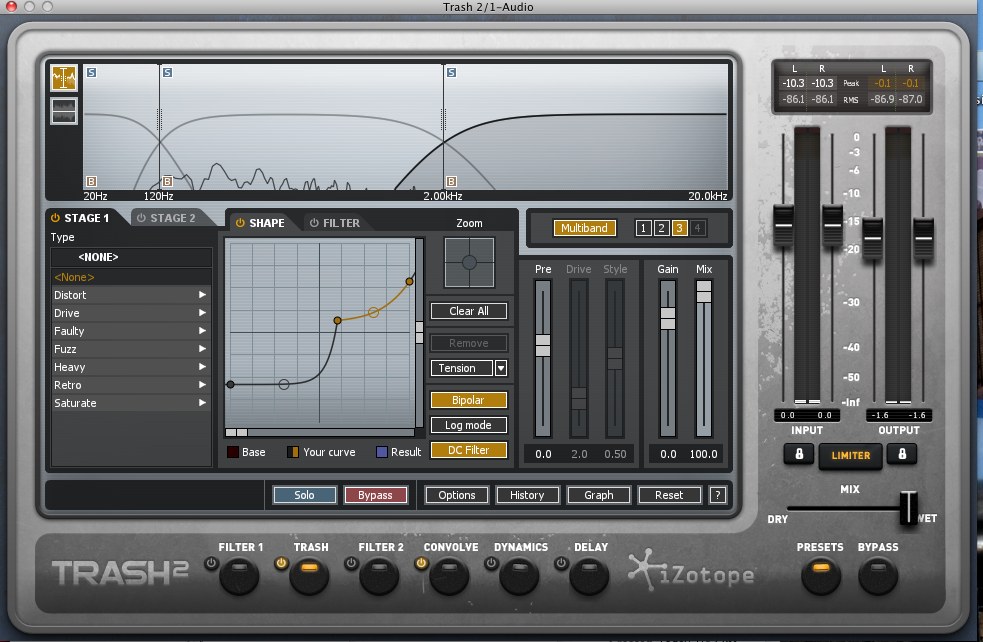 Filters 1 and 2 offer detailed and varied ( resonant, synth, retro, vowel, etc.) frequency carving options that can be static or controlled by envelope or LFO (free running or synched to the DAW). Dynamics permits multiband compression and gating. 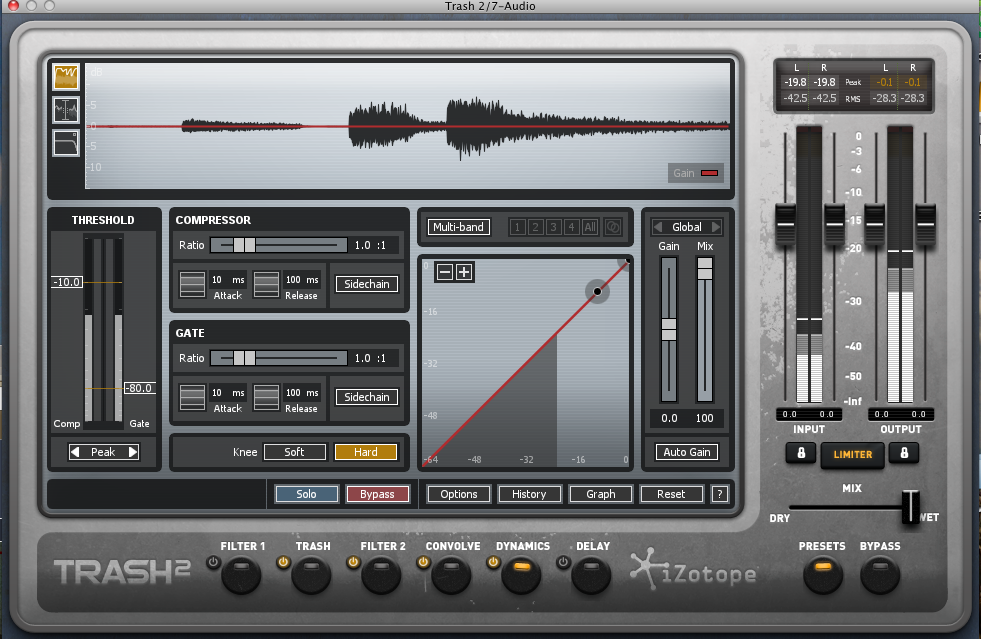 Convolve runs the distorted, frequency shaped sound through impulses of everything from amps to animals. You can even load your own. I loaded an AIFF file I recorded from the testing machine when having my nerve endings tested at the doctors office. It resulted in an unearthly ambience, perfect for sound design work. I experimented with placing it before and after the trash module: both yielded exciting new sounds. The separation parameters made any preset or original creation sound enormous. 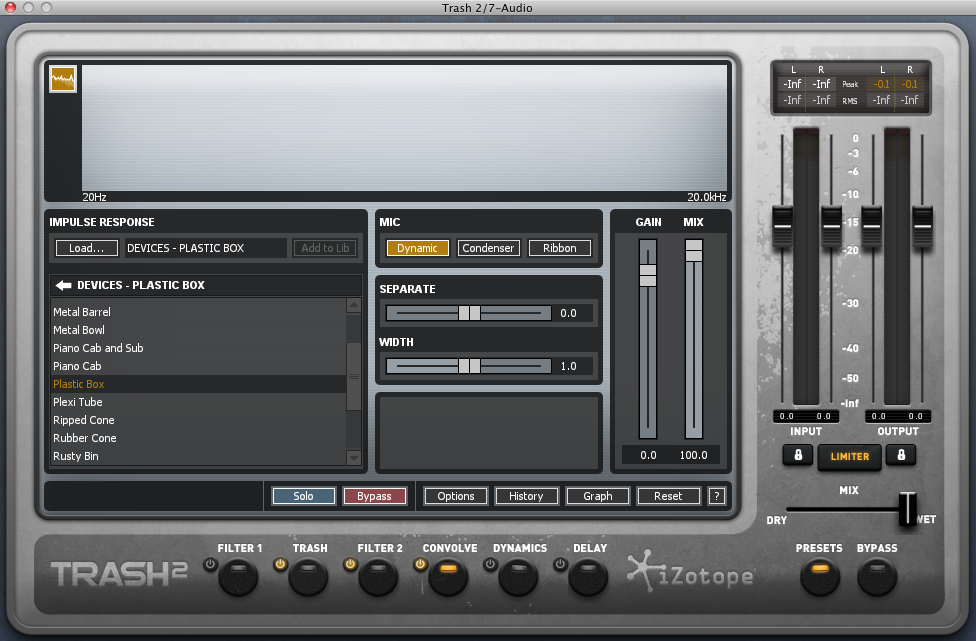 Unfortunately, when I tried to save this impulse to the Trash library it continually crashed Ableton Live. [According to Izotope’s Kim Pfluger, “This is a known issue in Trash 2. It is in line for an update very soon, but I can’t say for certain when exactly. In the meantime, users that are experiencing this problem can write to support and a beta build will be issued to them.”] Once they get this licked, Trash 2 might be worth the cost just as a host for convolution impulses.

The Delay module offers up to 2 seconds of variously flavored (analog, tape, lo-fi, bit crushed) delay whose repeats can be further trashed to an adjustable degree. 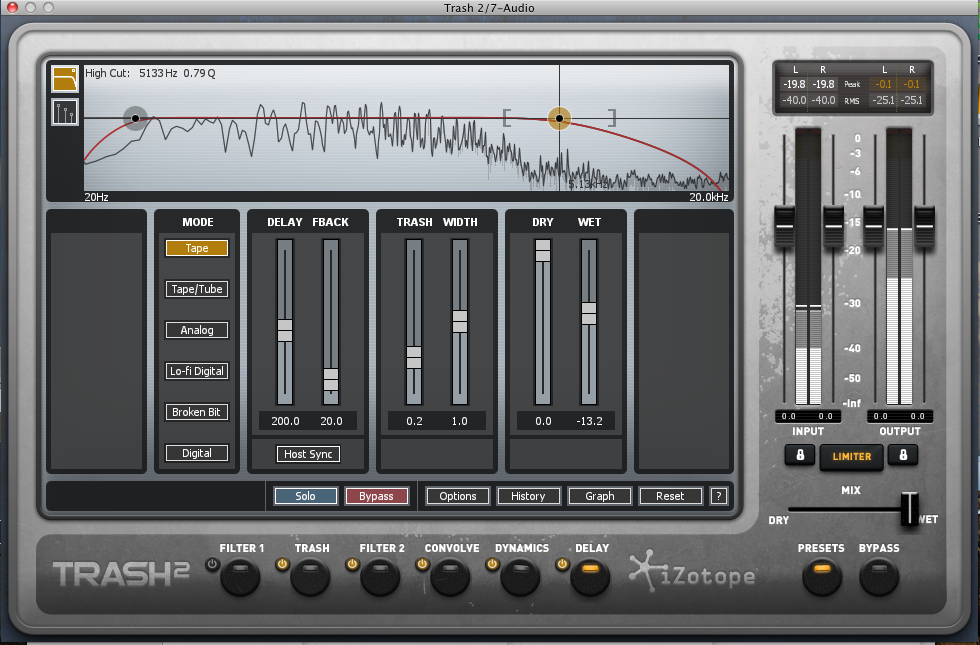 Despite the seemingly endless parameter permutations available, Trash 2 was easy  to navigate. Its logical layout made jumping back and forth between modules a simple task. Still, the sheer amount of tweakability means you could devote a lifetime to exploring it potential. If distortion that tends towards the experimental plays a major role in your music, you shouldn’t be without this awesome plug-in.