Back in April,  Mauricio Valdés  introduced himself through email. I am so glad he did. In addition to making interesting music, he is in the process of developing software, Arenero, that should be of interest to many modern guitarists. According to Valdés, “Arenero is a free software system for improvisation, dedicated to guided improvisations for musicians and aficionados of sound art. It has been used as the basis of sessions for many different groups working in free improv workshops and conferences in Mexico and Europe.” For more info on Arenero and Valdés, read on.

Mauricio Valdés San Emeterio is a Mexico City born guitarist and media artist. He explores various fields of sound and compositional experimentation. His work comes from noise and rock. At the University of Guanajuato he became interested in technology and composition. His career has been settled around different sound-work areas with particular emphasis in electroacoustic and experimental sound art, but also on acoustic music and music education. His catalog includes works for solo instrument, ensemble, mixed media, guided improvisation, installation, film, and assorted performing arts. His works have been presented in 18 countries, at festivals, conferences, and symposia about music and sound art. He moved to Ljubljana, Slovenia in 2011 where he became involved with the development of directional sound devices, which he now uses for personal and commissioned pieces of art and sound related research.

Arenero contains an internal sound manipulator effects engine and some sound descriptors to shape the incoming signal. The audio of sessions can be recorded for future reference and analysis.

The structure of the software is a sequence of parameters, which dynamically change through out the session. The user can adapt the duration of the session, meaning all the sequences adapt to a time range set by the user. The steps or cues for the sound effects and processor are stipulated by a typical message sending in MAX/MSP: 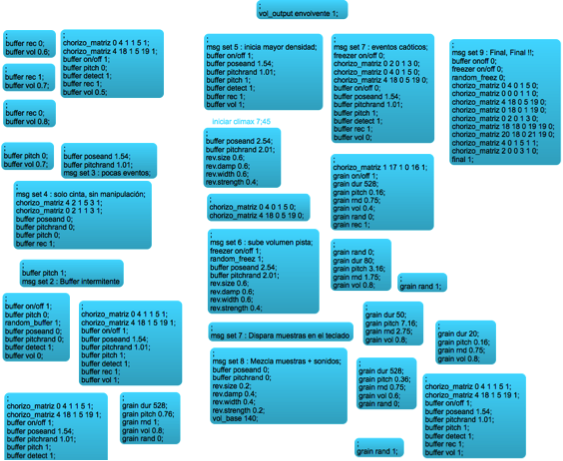 Arenero has an EQ with user presets to adapt to different instruments or sound input:

The processor has the following sound effects:

The network of effects self-behave during the session in a complex matrix that allows the resending of processed signal to different effects and sending them back out. The sound can also be re-sent to another effect before being sent to the general output. The user can clear the matrix at any time and there are some hot-keys that allow you make parameter changes over the course of the session. 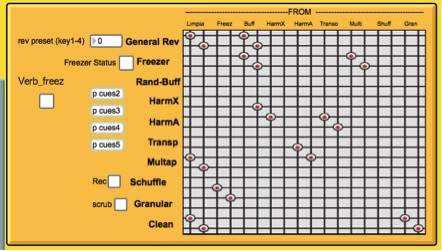 Each version of Arenero has a “tape-piece” as a background support. The idea behind this is to suggest an aesthetic starting point and the spirit of the software. The piece can be muted by advanced users, or it can be altered by the matrix of effects and/or by a general transposition of a +-3octaves. Example

A more advanced version of Arenero includes an external MIDI controller mapper; which allows the user live parameter control during the session. 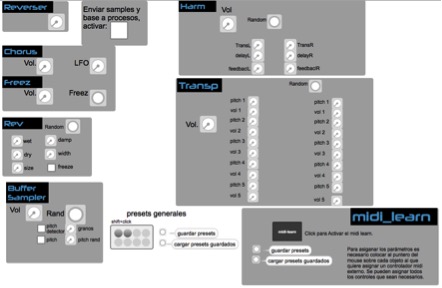 Also included is a self-organizing parameter sequencer, allowing the user to set the behavior of all the sound manipulators in depth.

In addition the software allows multi-track and multi-channel output for sound spatialization, in collaboration with HyperSpace’s advanced spatialization software. 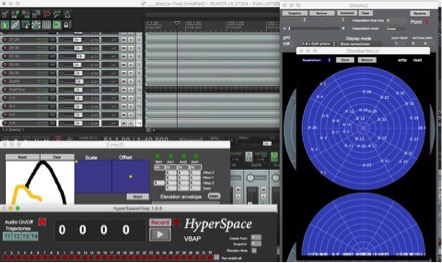 “Santa Muerte,” a 32 channel piece commissioned by the IMA-Institute of Vienna, was programmed with HyperSpace and Arenero

The next part of the software is a network of sound descriptors. The first and simpler one controls the balance between the sound effects, the “tape piece,” and the incoming signal. This feature avoids the common problem of leveling of the mix.

The second descriptor has a pitch follower to detect pitched sounds and use them as triggers for a preset bank of sound triggers; 15% of the pitched sounds within the range will be randomly assigned as “triggers” each time the range it’s set, to create a more coherent relation between the playing and the background sounds.

The last part of the software is a very powerful tool for external sound enhancers that converts the sound into midi data transferable to any hardware or software synthesizer as long as it accepts MIDI note input. The conversion of the sound is made by the pitch follower with some noise gate filtering. I’m working on a more advanced way to use this feature, but for now it’s a great tool to use with Native Instruments Kontakt software, where I can have a drum and bass follower. I can also set the descriptor range, allowing me to link certain ranges of my instrument to different synths and samplers.

For example, at this rehearsal Arenero sends MIDI out to the Nord Clavia Modular synth of Jure Pohleven (part of the DNA sequencer project):

As part of Germinal project, I was commissioned by the National University of Mexico, UNAM in 2015 to make a version of Arenero with an iPad controller via Open Sound Control (OSC).

It has a new interface with a cleaner, more modern icons: 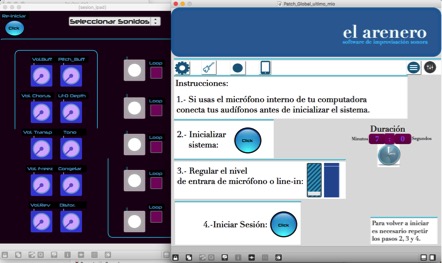 For the future, I am looking for a way to finance a new version and port it to Windows platform, and make Mac and Windows stand-alone versions, free for download.

This version has an ambitious framework with an engine to work with the Algorithmic composition software, AC toolbox.

Arenero has become my main software for stage performance, I use a combination of all its features, including it’s built-in virtual guitar amplifier software, or Native Instruments’ Guitar Rig as a vst module. 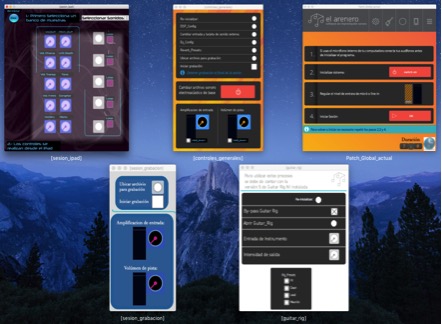 It is a new sound controller that offers multiple dynamic manipulations with the same structure as a sequencer. The graphic interface attempts to be intuitive, with a minimum amount of set-up steps. I have made hundreds of recorded and edited sessions with this version, for analysis ,and for compositions like the sound installation commissioned by the philatelic museum of Oaxaca in México.

Hit the Subscribe button for info on Arenero development and availability