Guitar Moderne presents the ultimate in small pedalboards. Internet searches love this kind of pompous statement. I’m actually talking about my personal go-to board for jam sessions and quick recording work. Its three, extremely versatile, effects pedals cover many of the sounds I need, for a variety of genres. They are packed on a small, sturdy pedalboard, powered without batteries (in the pedals) or needing to plug into a wall. Whether the gig is blues, roots, country, Americana, rock, pop, jazz, improv, experimental, African, Latin, or virtually any other style of music, this pedalboard lets me create appropriate tones. Check out the video and “read more” for full pedal descriptions.

Many of us have one or more pedalboards, crammed with a variety of effects to sculpt our sound exactly as we hear it. I had two: one filled with my favored gigging essentials and another with my more esoteric pedals, for sonic experimentation (described in this article ). Still, there were situations that called for something different, something more compact and even easier to set up.

I arrived in a new town, where I needed to attend jam sessions and get my name around. I knew plugging directly into a house amp was not going to showcase my playing to its best advantage. For better or worse, I can’t play well unless I have good tone. I know, I know, most of it is in the fingers. I have worked long and hard on that aspect, but even the most expressive fingers have a hard time wresting an evocative sound out of the badly maintained Fender Silverface Twins and amps of this ilk populating the usual jam backline. I don’t need much: just some responsive overdrive and a working reverb.

Bringing my basic gigging board to a jam is not an option. No one is going to appreciate me taking time to plug in the power cable and search around for an electrical outlet. Nor would they welcome me taking up even the modest 12 ½” x 25″ of floor space required by my Pedaltrain Classic pedalboard. Bringing an overdrive and a reverb pedal was better, but most reverb pedals don’t run on batteries; add the extra plug in time required to connect the pedals and you’ve got two strikes against this solution.

The introduction of the Pedaltrain Volto at NAMM a few years ago got me thinking. “What if I didn’t have to plug the pedalboard into the wall, just plug into its input and out of its output into the amp?” And, what if the whole pedalboard was only 14″ x 5.5″? I could bring basic pedals to a jam session and be ready to go in only a few seconds more than going straight into the amp!

With only the limited real estate on the Pedaltrain-NANO board (I called it a two-inch longer Metro in the video by mistake) the choice of pedals became extremely important—I wanted to get the widest range of tones from the fewest stomp boxes. 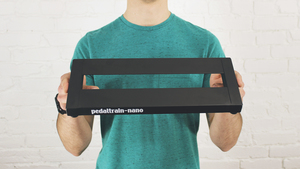 Using one or more of the new mini-pedals sprouting up everywhere would have allowed more, but I wanted the best quality and most tone shaping ability. Even though some mini-pedals sound great, they often hide parameter controls inside the housing to save space, meaning access to them is not an option once you paste the pedal to a board. This might not be a problem if you use them exclusively with your own amp—you could just set the internal trim pots for maximum compatibility and forget it, but the amp variations inherent in jam sessions require ready access to as much tweaking as possible.

First up is the overdrive: this had to be as amp-like as possible, so I would feel as if I was playing through a great boutique amp— regardless of the combo provided at the jam. I have already extolled the virtues of the Alairex H.A.L.O. in a full Guitar Moderne review. 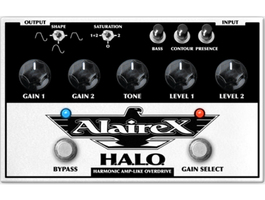 Briefly, it feels just like an amp, has two differently voiced channels with oodles of options for adjusting the feel (i.e. sag) of each, and is dynamic and versatile. So, although it hogs more a third of the board, it is well worth it.

Two! Two! Two Effects In One!

The other essential effect, for me, is reverb. But, why settle for just reverb when I can get delay as well—all in a standard single pedal housing? Earthquaker’s Dispatch Master not only combines reverb and delay in the same pedal, but also lets me dial in a world of ambience with only four knobs. 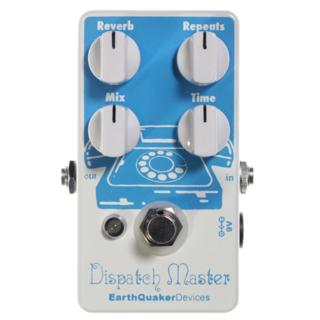 With the Delay knob all the way down, I get a warm, lush reverb that can be increased or decreased with the Reverb knob. In this setting, the Repeats knob acts as a enhancer for the reverb, controlling the thickness, decay, depth, and general nature of the ’verb. Turning the Reverb off and the Delay knob up, I have an equally warm sounding delay, which, though digital, has a more analog or tape tone. As with those types of delays, the Dispatch Master makes cool pitch shifting tones when you change the Delay time as signal passes through. The repeats range from one to enough for some loop-like layers—without ever reaching the runaway point.

In a design like this compromises must be made. With no reverb decay adjustment, the length had to be fixed. Initially, I was concerned the decay was a little longer than I would have preferred, but soon realized the very end of the decay is covered up when playing in a group context, leaving plenty of ambience on the front end. The longer decay also fills things out nicely when playing solo, and is handy for extreme ambient effects.

Speaking of extreme ambient effects, the Dispatch Master sounds warm and natural, even with the Mix on full wet, evidencing none of the “metallic” sound often found in digital reverbs. This is because Earthquaker’s Jamie Stillman purposely used lo-fi digital conversion, which eliminates the upper frequencies that often accentuate the “digital” part of digital sound. This also keeps the reverb and delay tails from stepping on the original signal.

From Warble To Slice

With the essentials covered, I had room for one more pedal. The typical choice is pitch modulation, like chorus, phasing, and flanging. These days, however, I find volume modulation more in tune with the music I listen to and make. On the roots end, tremolo is a sound I love, and others seem to dig as well. On the more modern side, chopping and slicing offers sounds reminiscent of synthesizers or studio glitch effects. 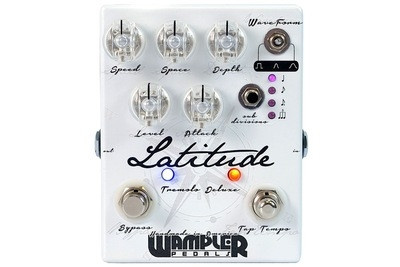 The Cusack Tap-a-Whirl on my main board fulfills this range of volume modulation effects and offers tap tempo as well. Unfortunately, it wouldn’t fit in the space left between the H.A.L.O. and the Dispatch Master. I spent NAMM 2014 searching for a smaller tremolo pedal that would do everything the Cusak does and the Wampler Latitude came closest, including tap tempo, while fitting in the allotted area.

It also added some tricks of its own. The Attack knob controls the ramping angle of the waveform peaks, while the Space knob increases or decreases the distance of the valleys. These, combined with an analog sound path, let me dial in everything from vintage sounding, amp like tremolo to Electro-style chop effects. The former were created using the sine or peak wave options, while the square wave was ideal for the latter. Messing with the Attack and Space, in conjunction with the time subdivision options, let me conjure up a variety of virtual rhythms. The Level knob is there if you need to compensate for the psycho-acoustic volume drop that a tremolo can induce when engaged.

All Hail To Volto

Pedaltrain’s Volto—a lithium-ion battery with two 9-volt outputs providing a total output of 2000mA—easily powers all three pedals. At 3.31″ x 3.75″ x .75″, it is about the same size as a smart phone and fits perfectly under my Pedaltrain-NANO. Its AC charger comes with universal plug adapters, allowing it to be recharged anywhere in the world. 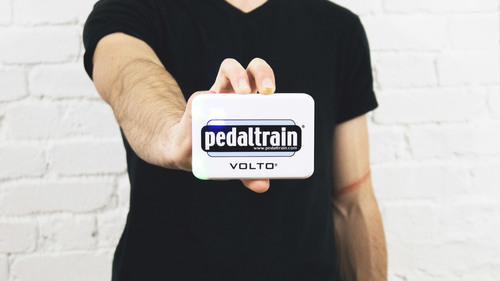 Sony came out with a similar product about five years ago, but if it ran out of juice on a gig, you couldn’t plug it in and keep playing—with Volto you can. Though, unless you forget to charge it, you probably won’t have to plug it in mid-gig. I leave the board on for hours at home and can attest that it will easily get you through a couple of long shows—just shut it off when you go to dinner between sound check and the performance.

Of course there is really no Ultimate Mini Board. What I offer here is the benefit of my years of gigging and testing experience with a wide variety of overdrives, tremolos, and reverbs. But, if you have three different pedals you love, or want to go with four or five minis—go for it.

Whatever you use, I recommend the Pedaltrain boards.  As my friend, Guitar World gear editor, Paul Riario says, “It lets the beer drip through the to floor.” For a quick jamming board, or even for your standard gigging rig, the Volto is a great power source. Did I mention it removes the issue of line noise from the wall and comes with a cute bag you can hook on your gig bag? 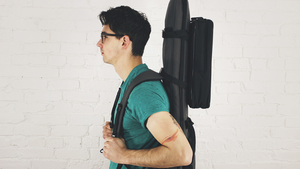 Nope, Still Not Me

I showed you mine, now you show me yours. If you have a mini-board that does it for you, send a picture and a description of what is on it and why you love it. I will happily feature it in the Reader’s Rig section.