After the encouragingly enormous but exhausting winter NAMM, the relative Southern sleepiness of the summer edition was welcome. As usual, it was largely guitar oriented, tending towards traditional, with variations on of vintage guitars, amps, and effects in abundance. There were, however, a few examples of forward thinking.

The award for coolest gear at the show has to go to the Coppersound Telegraph Stutter. Perhaps modern only in a steampunk sense, it is still such a great idea sonically and aesthetically that it wins hands down. See the rest of the report for some of their other offbeat pedal concepts.

Indisputably modern, you should check out the website for all the things it does. Vaporware at the moment but we will try to keep on it.

Eastwood
Eastwood was showing their more affordable version of custom builder Jeff Senn’s Model One. I had a chance to play it and compare it to the original. I was suitably impressed. It is a unique, retro/modern looking instrument, with a sound of its own—and a Jazzmaster-style whammy bar that allows playing behind the bridge. 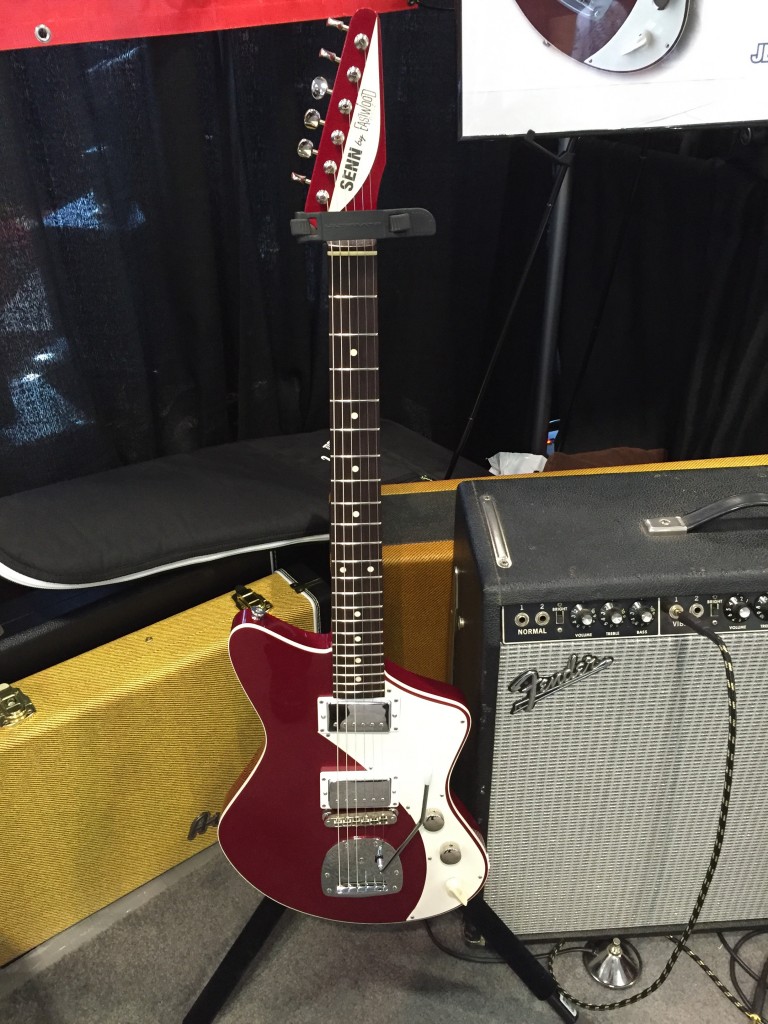 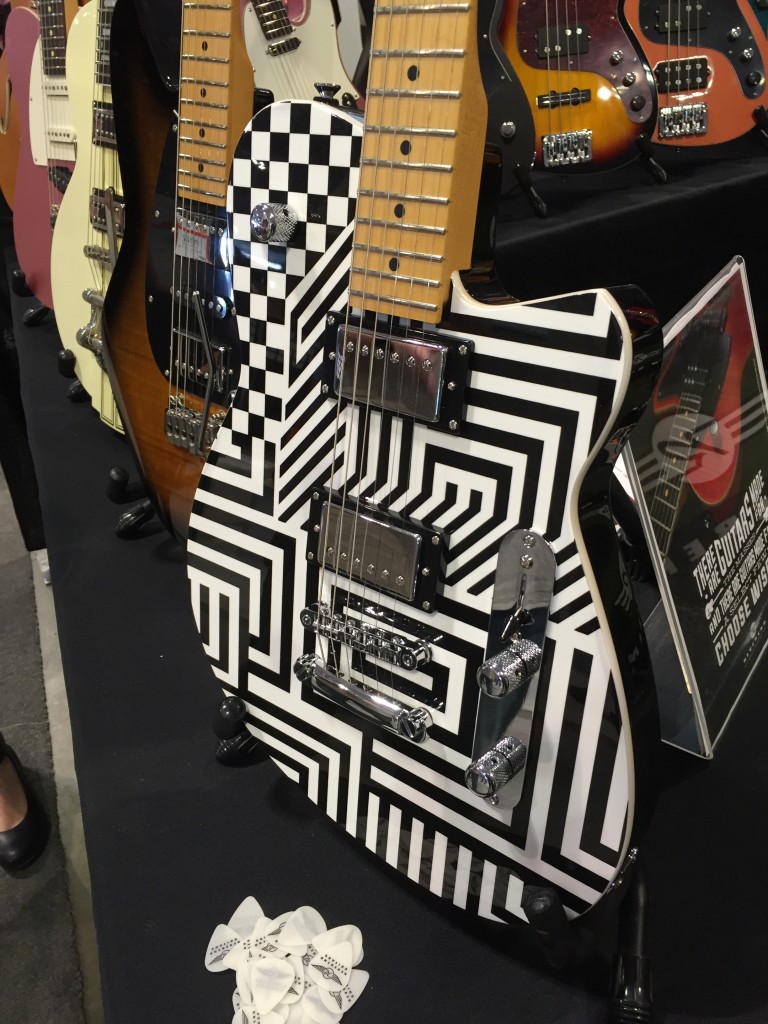 This successful pedal maker introduced an amp, the Bravado, dedicated (as you might suspect )to being a perfect pedal platform.

Jeff Bober and his business partner, Scot Sier started, Budda Amplification. East amps offer models from 2 to 50 watts. The one I plugged into sounded great.

Copper Sound Pedal Effects
The makers of the Stutter effect have the Strategy boost pedals that also come in interesting enclosures. They make differently voiced ones to match the instrument implied (Strat, Jazzmaster, Bass) and will work with you to visually match your guitar as well. 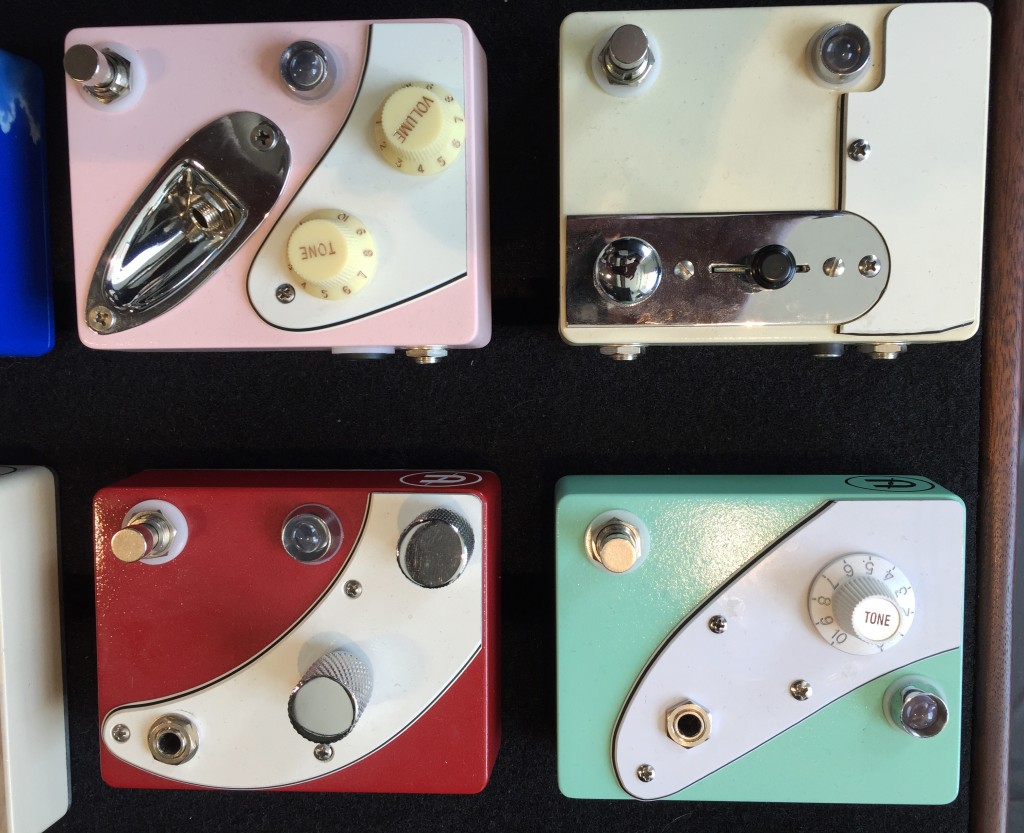 While focusing on their new amp, Wampler did release a new smaller version of their beloved Ego compressor. 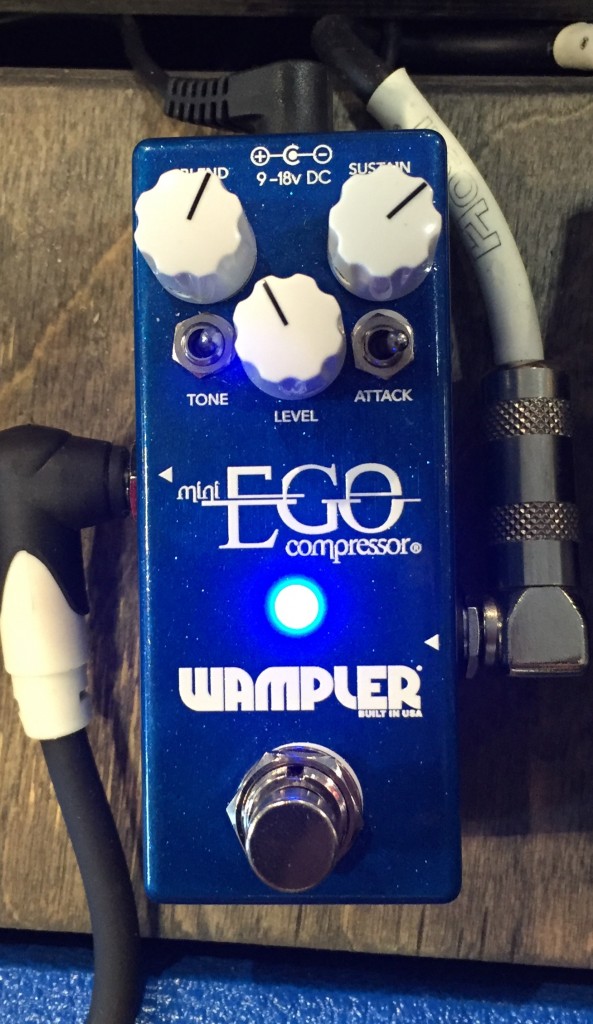 Jeez, not another Klon clone. Hah—gotcha. Pelitaur is two distinct fuzz circuits running in parallel. You can blend these two sounds together. The gain control is a blend knob between the two fuzz circuits. All the way CCW is a sputtery sounding fuzz, while full CW is a classic scooped-mid fuzz sound. After dialing in a blended fuzz tone, sweeping the “treble” actually boosts highs in one circuit, while it boosts lows in the other. Output is an overall output level. Internal trim pots to adjust gain level of each fuzz. 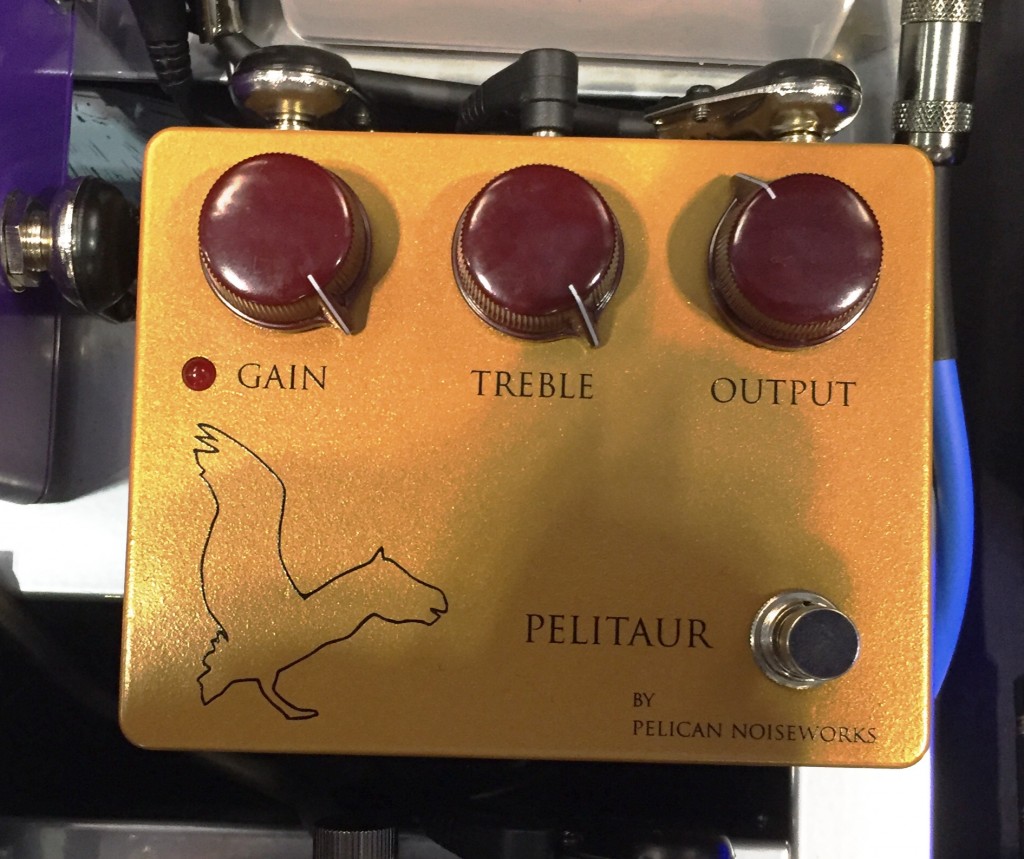 Function f(x) Third Rail Dual Overdrive
Not just another overdrive, the Third Rail is a tweakers delight with two independent discrete overdrives utilizing NPN transistors. Each identical channel includes a diode clipping switch that chooses between Schottky, no diodes, or silicon diode. The left channel has a high Gain switch and the right channel has a Bass cut. Each channel can be run independently or in series. There are also three bypass modes: one side on at a time, toggling between each channel, or switching both channels on at once (with a cool momentary bypass on the second foot switch for stutter effects). The Third Rail remembers which mode you prefer when you unplug the power supply.

Modern guitarists often use distortion, though in ways that can differ from standard rock and metal players. Hand wired in Chicago, Daredevil debuted the Red Light District, a two-channel gain circuit with a slightly fatter bottom and more cut. An added tone section includes selectable mid scoop that can be increased or narrowed to dial in EQ, for countless doom, desert, and thrash tones. 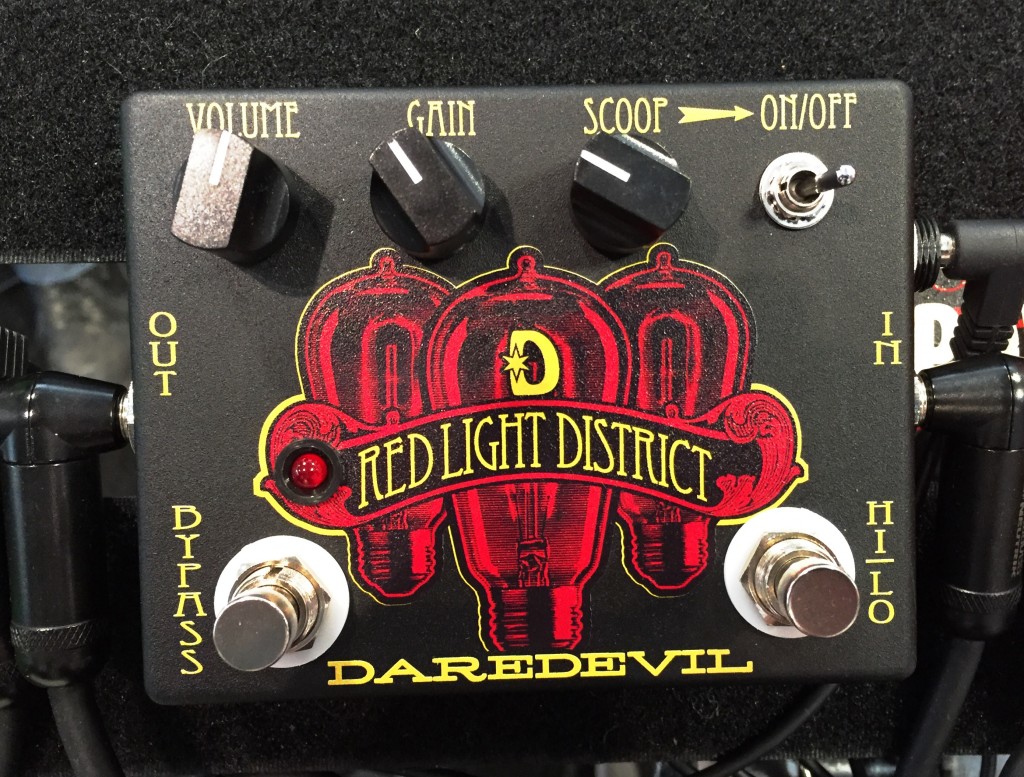 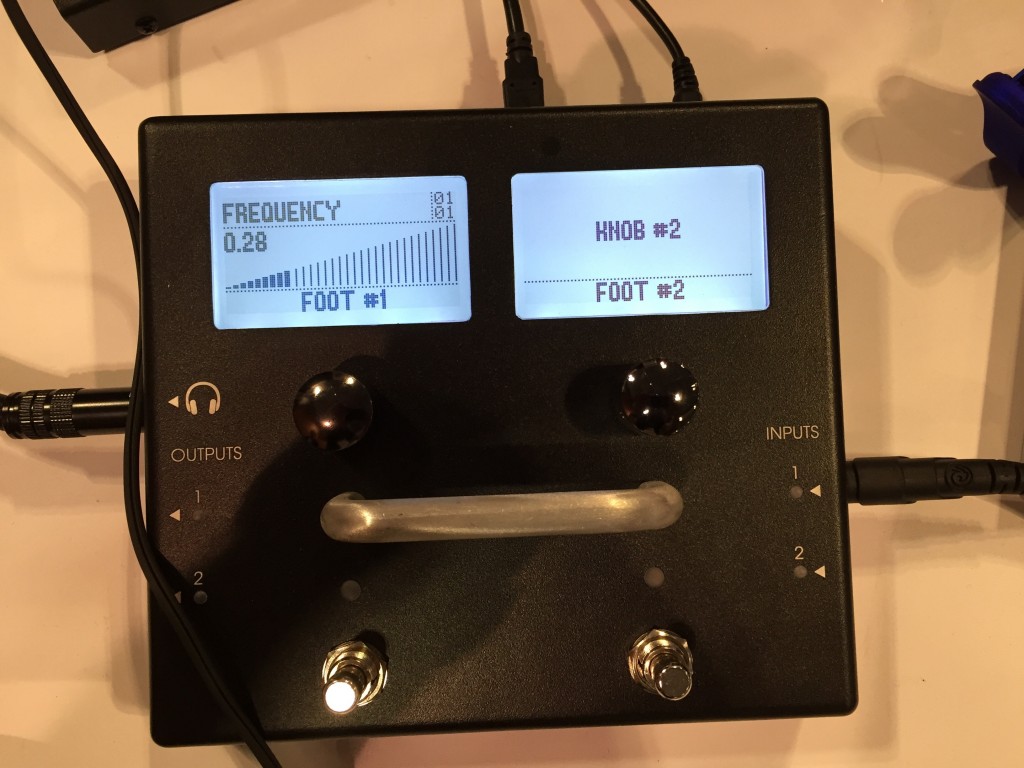 This appears to be is a kind of open source host for effect plugins. It connects to your computer through USB where you use their editing software to put together pedal boards of plugins. You can set the two foot switches and knobs to control whichever parameters you wish, and then load them to the device. It affords access to effects, loopers, amp sims, etc. I detect loads of possibilities, especially if they stray from standard effects—granular and spectral anyone?

This major manufacturer has been releasing pedals that are as cool and desirable as those by any boutique company. For SNAMM they introduced the Echoplex delay, and the new Cameltoe double overdrive, which is a Green Rhino on one side and a Red Llama on the other side. You can switch back and forth or stack them. Their new fuzz is the Super Badass Variac Fuzz with a knob that can send it from 5-15 volts. Finally they showed the Double Double Overdrive. One setting is classic mid bump overdrive, while the other is a higher gain drive. Treble and Bass tone knobs help set it apart from similar drives. 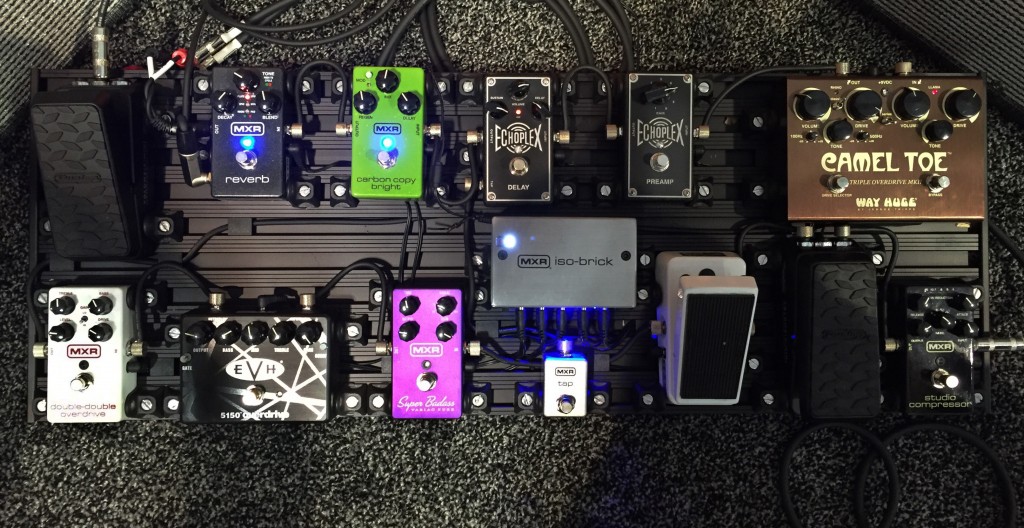 Dwarfcraft Devices’ new Happiness is a multi-mode filter pedal. The filter can be modulated with an internal triangle based LFO, external CV patched in, and a “scramble” feature, akin to a sample and hold. Expression jacks for filter cutoff and LFO speed are along the top panel, and CV in and out are on the sides.
Their first modulation pedal, the Twin Stags Double Tremolo has two full featured tremolo circuits, offering trem speeds from extremely slow to “ring mod” fast. The triangle core LFOs can be skewed from ramp to saw, and all points between. LFO 2 can also be used to modulate the speed of LFO 1. The pedal features two expression pedal inputs, one to control the rate of each LFO. Both pedals are compatible with Eurorack modular synth systems, and Dwarfcraft’s other CV capable devices. 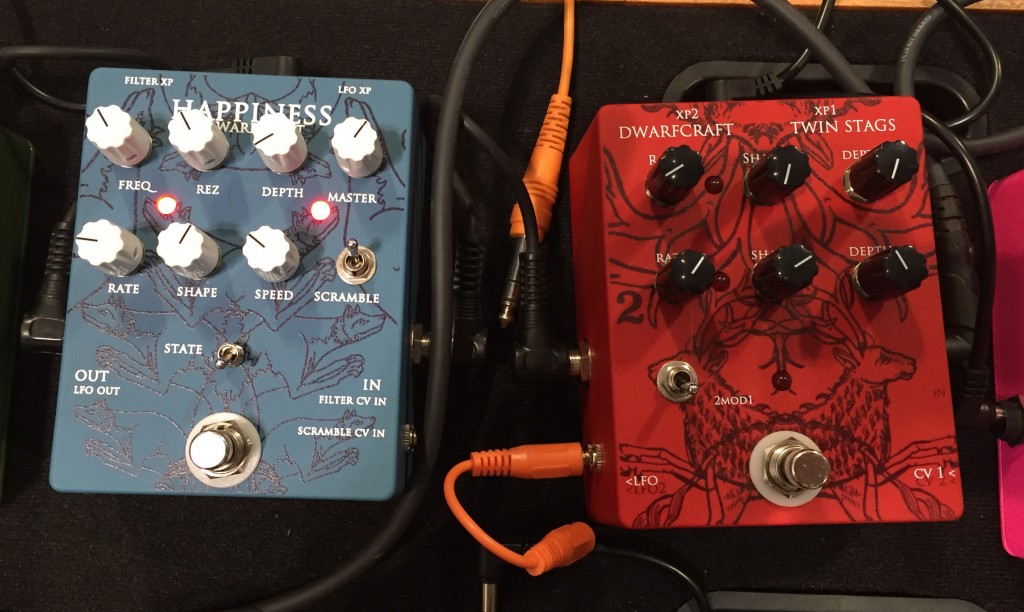 Cusack introduced the Pedal Cracker, which allows you to run vocals through all your guitar pedals. It is a vocal preamp with phantom power and an effects loop that works with guitar pedals. It has latch and momentary modes. 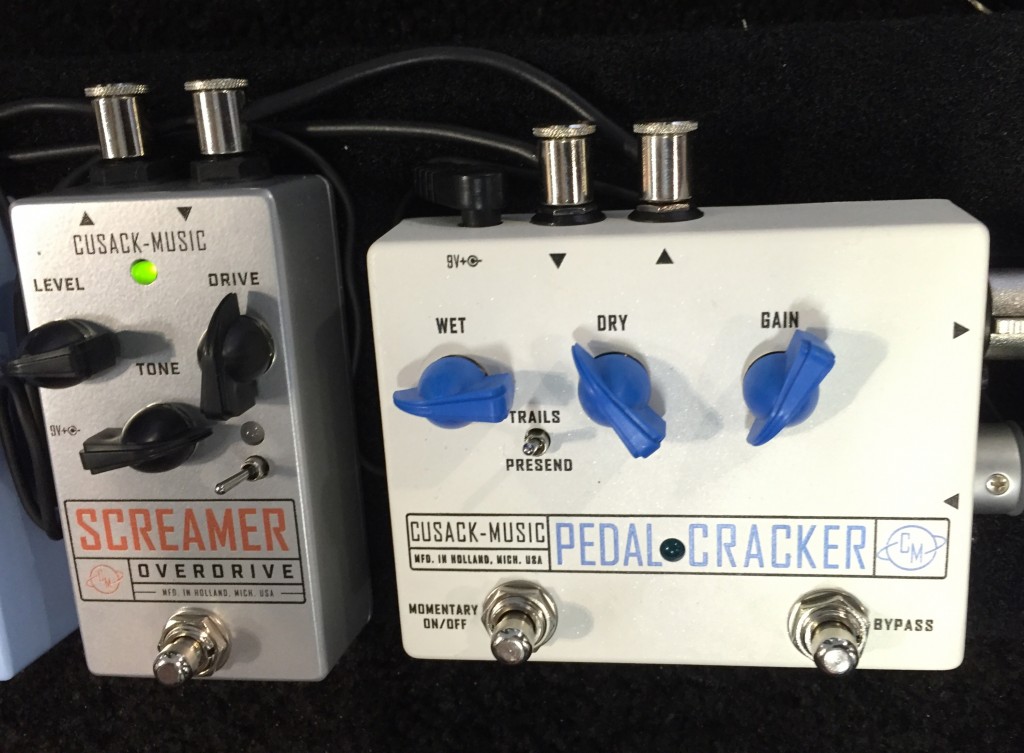 Pigtronix Philosopher’s Tone has been a coveted compressor for years. In keeping with the trend towards mini effects, they have introduced the Micro version, which packs the optical compression and sustain of the original Pigtronix pedal into a micro chassis that runs on standard 9V external power. In addition to volume and sustain controls, it features a knob to blend the instrument’s original signal with the compressed effect. The Philosopher’s Tone Micro features True-bypass switching and internal 18V power rails for maximum clean headroom, even when used with hot pickups and line level signals. 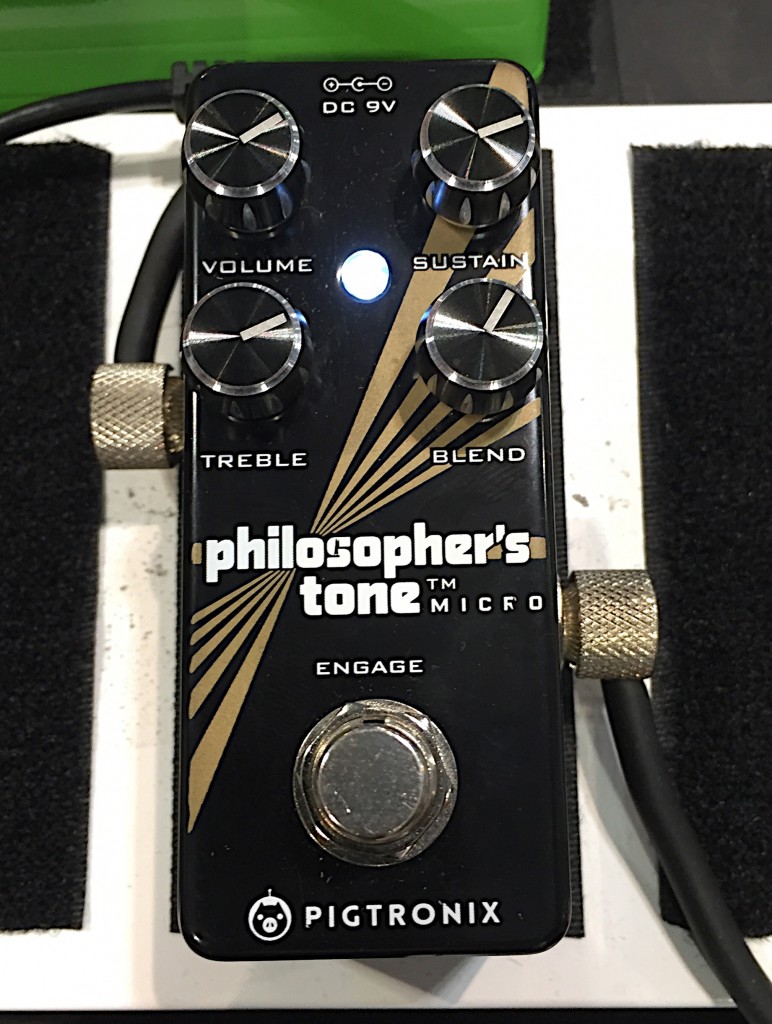 The new trend seems to be putting two LEDs on single switch pedals, just because one can. The important thing is that the Dark Horse is a rich sounding fuzz. 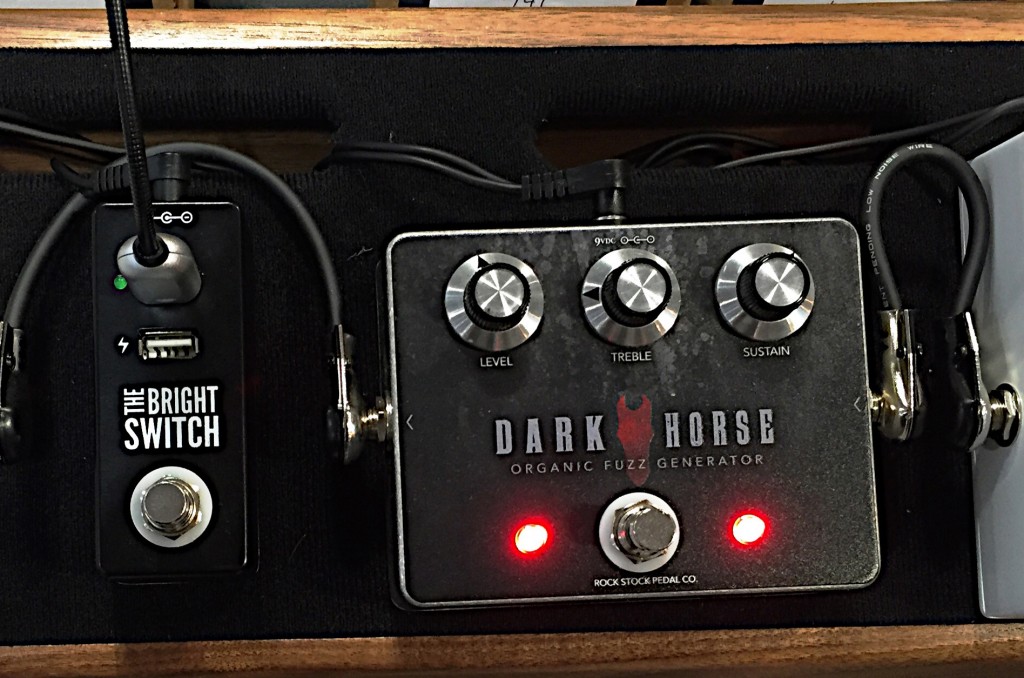 All the Tomkat pedals also sport an extra LED, along with illustrated innards. 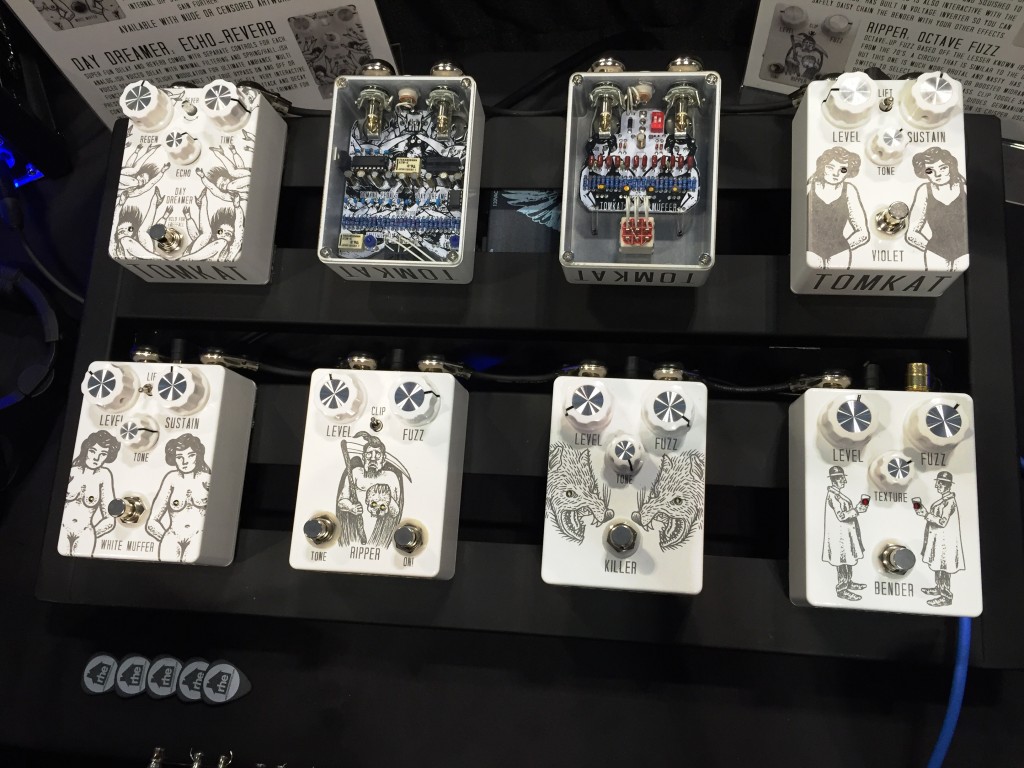 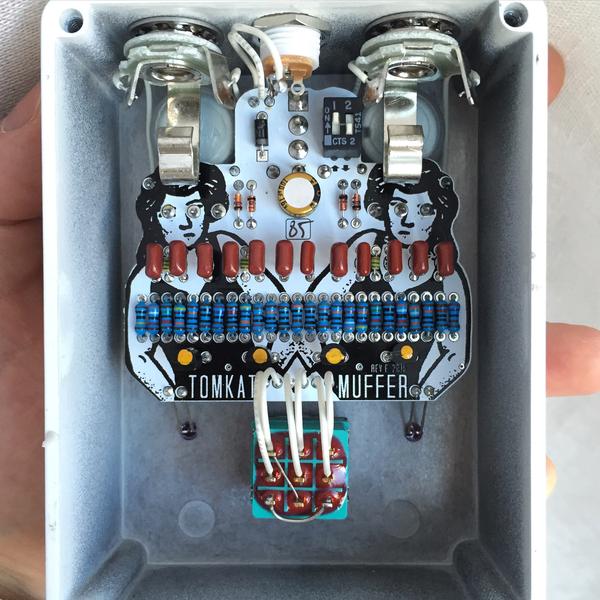 Here is the Violet Fuzz

Black Arts Toneworks
JA Dino Deane has often raved to me about the Black Arts Pharaoh Fuzz. It has a hi/lo input switch and a three-way toggle for choosing the diode: germanium, silicon, or none. Interactive tone controls cover a wide frequency sweep. It is designed to have a full range response, letting the natural tone of the guitar shine through. 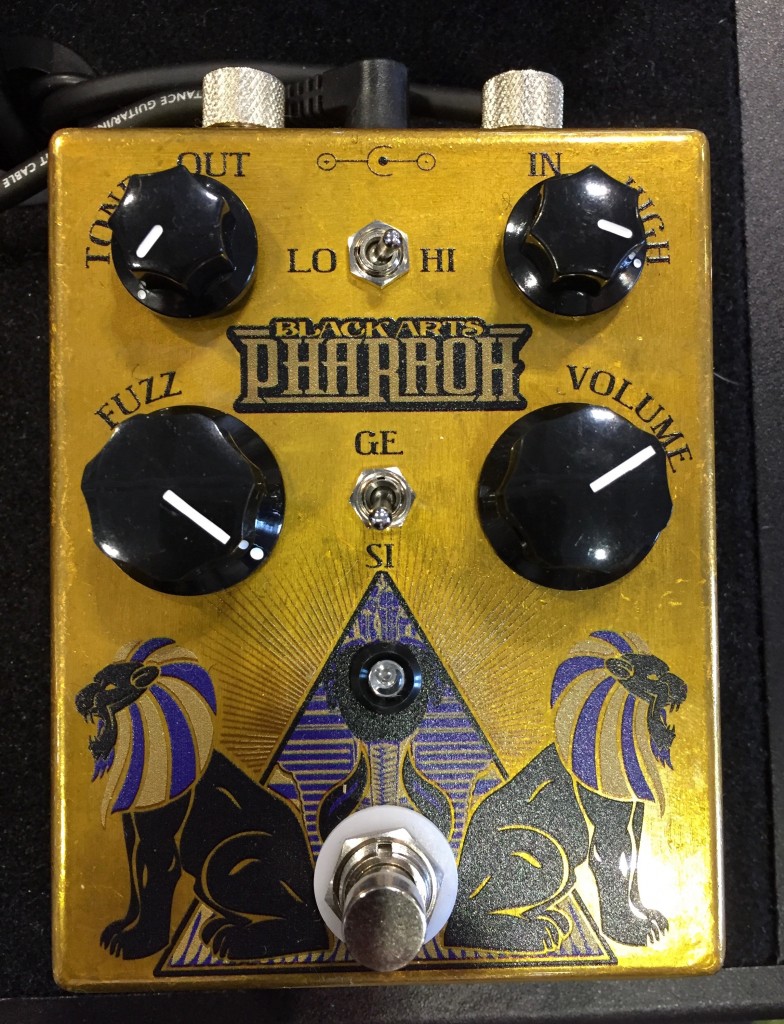 If you want “more,” their Coven Dual Combination Black Forest/Pharaoh fuzz device combines the Pharaoh with their Black Forest fuzz in one box. It offers switchable order and the option to use either/or/both.

For starters the new Mondegreen Delay has the coolest name. If you don’t know what Mondegreen means, it is when you mishear song lyrics, like “’Scuse me while I kiss this guy.” The delay has three modes with three types of modulation on the repeats: tremolo, chorus, and increasing octaves. 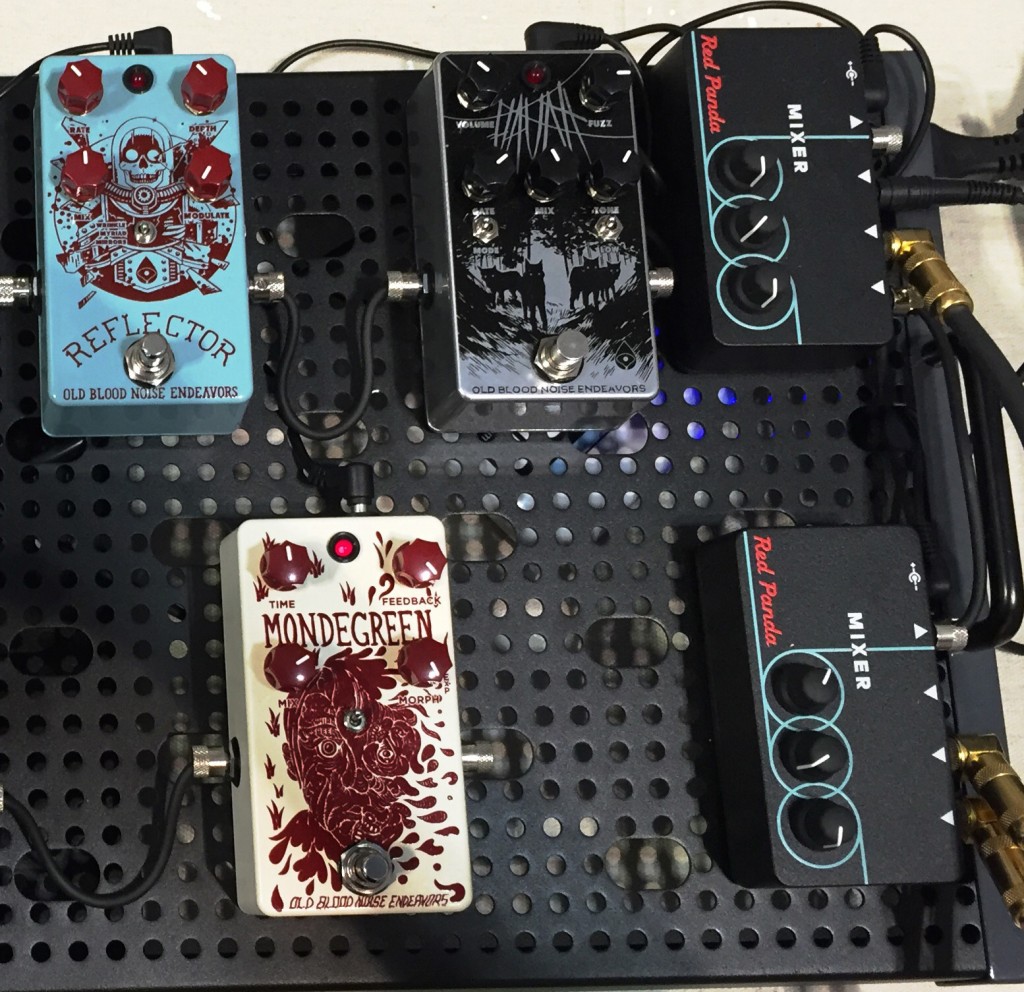 Hungry Robot pedals offer cool graphics to go with their cool sounds.
The Wash is an analog-voiced, tap-tempo delay with roughly 1000ms of delay time. It can be used as a basic delay or with in conjunction with the Wash Circuit. This adds a wash of reverb to the signal and, through a network of internal feedback loops, subtle multi-head effect, and a “ripple effect.” It sounds different than stacking a reverb and a delay in series. When the Ripple Effect is engaged, each successive delay trail slowly scatters and transforms into reverb. Resonance fine-tunes the resonance and decay of the wash. The big Wash knob controls the mix/level.

Their Kármán Line features joystick and a runaway repeat—always good for modern guitar delay. A hold switch for the repeats makes using the joystick easier.

This was a Best in Show winner at winter NAMM, yet somehow I missed it, which lets you know how huge Winter NAMM was. The device sends MIDI information to a Digitech Whammy pedal to allow you to use it like the familiar vibrato arm on a guitar. Since it is MIDI cc info, who knows what other uses modern guitarists might come up with (also suitable for acoustic guitars). 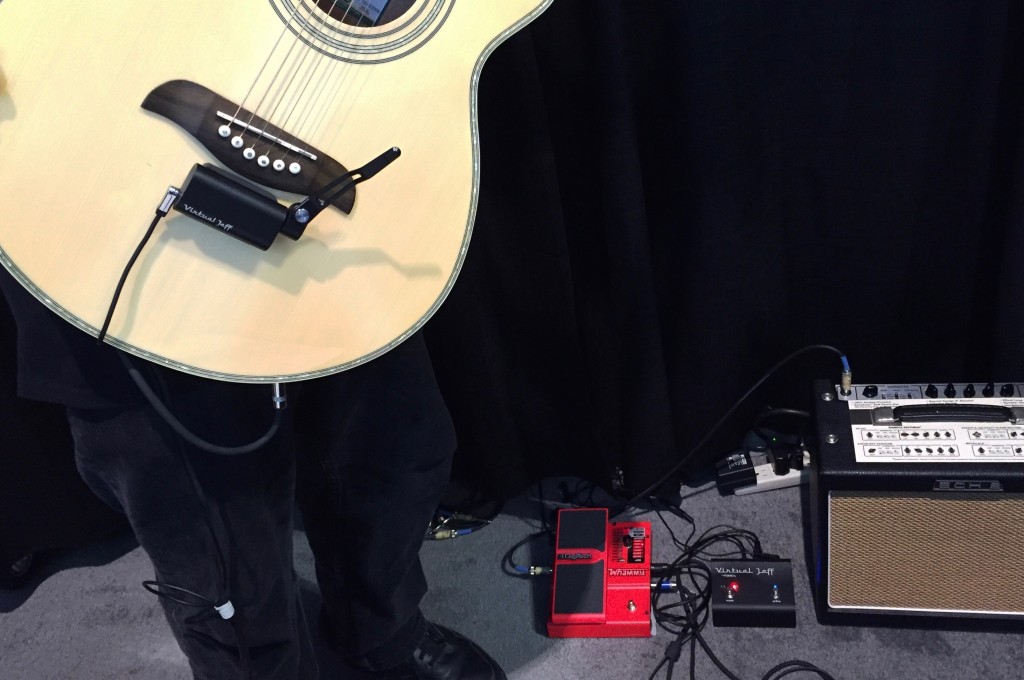 Jackson Steel
I have always preferred Jimmy Page’s B-Bender work to that of most country guitarists. It demonstrated how this kind of string bending could break free of country cliches. The Pro-Bender Pitch Changer for Telecaster is easily mountable, with no invasive drilling and can be used to bend various strings. 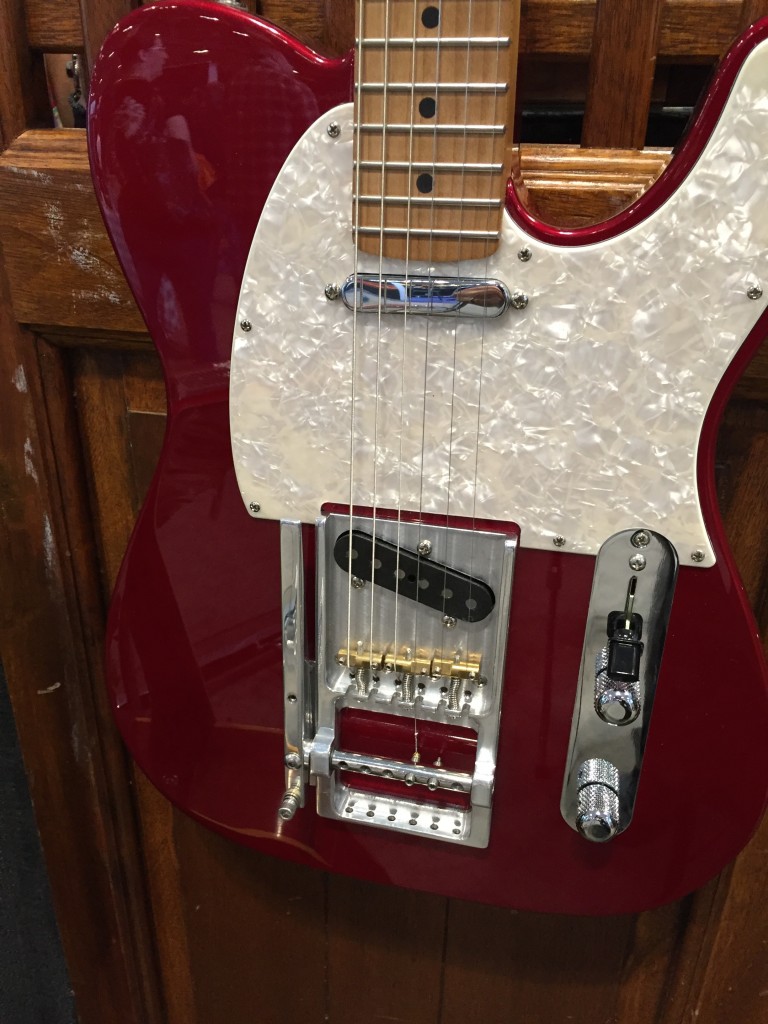 Banjo sounds are another tonality associated with country that has potential far beyond that genre. This handy device lets you convert your guitar into a banjo sounding instrument with the flick of a switch. 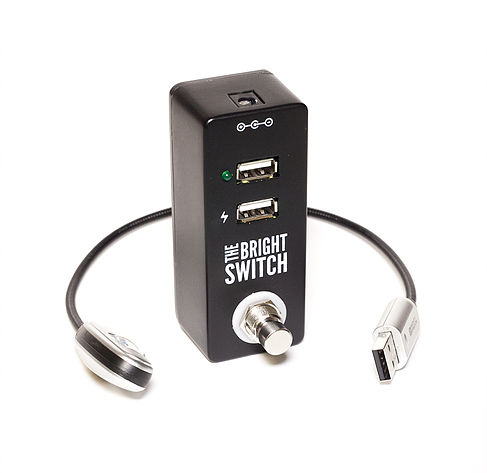 With more and more players incorporating iOS devices into their rigs, if only as music readers, the Bright Switch (get it?) will come in handy. It illuminates your pedal board with a utility light while powering your iPhone or iPad with the other USB connection. The USB light-powering port can be switched on and off and indicator LED lets you know its status. Both ports convert 9-24VDC to 5V USB power. You could use the light port for power but it will max out around 400mA whereas the bottom port can technically put out at 3A. A 9V 2A power supply is included.

Disaster Area Designs
Their latest version of the DMC-4 is the Gen 3, which continues the device’s tradition as a massively complex MIDI controller in a small package. Updates include new custom colors, more MIDI control, improved LED indication and display, sending MIDI Clock or tap tempo to your connected devices, without any additional hardware, and much, much more.

If there was a theme to this year’s Summer NAMM, it was pedals, pedals and more pedals, more than I could possible cover. So just for fun: 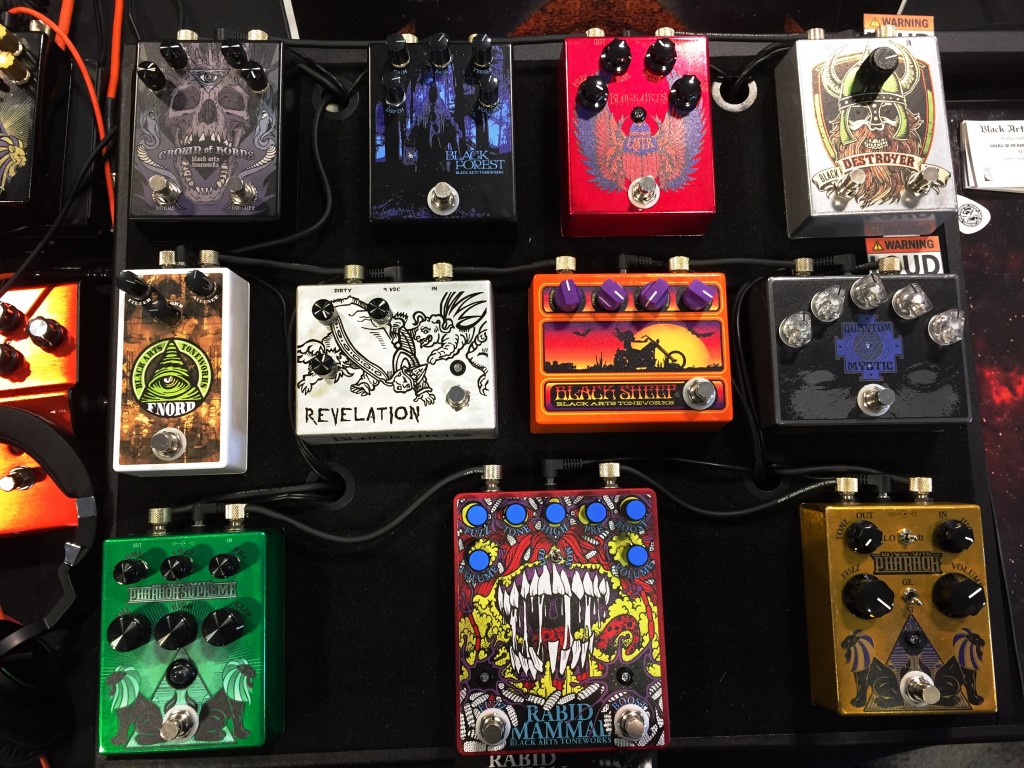 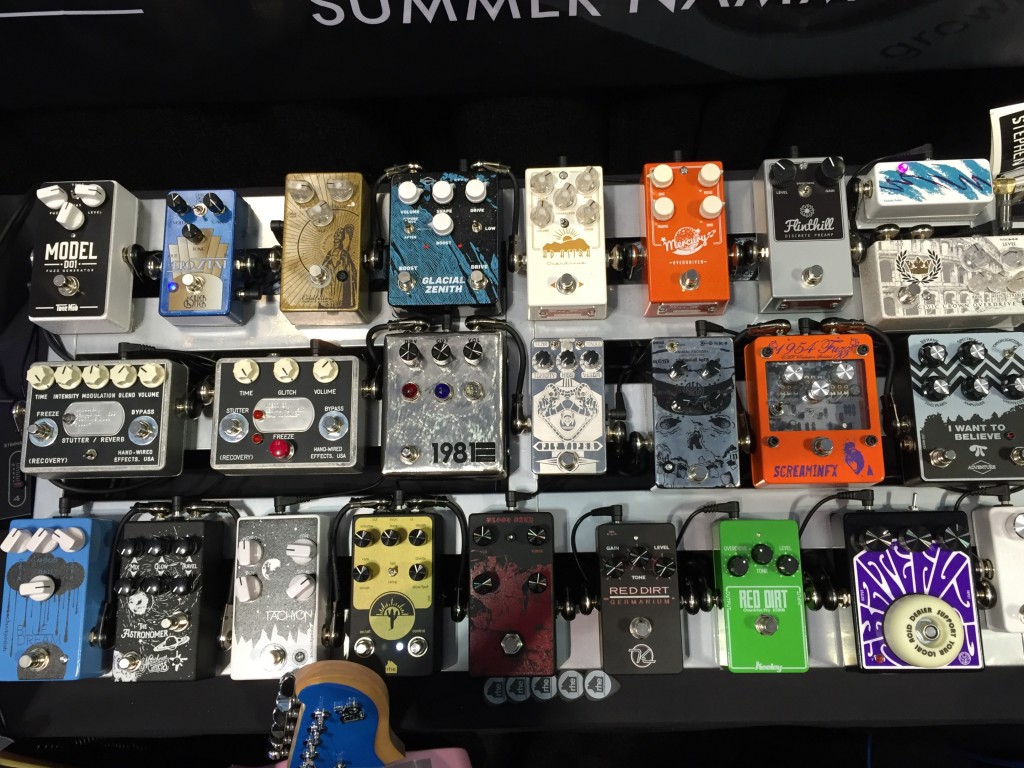 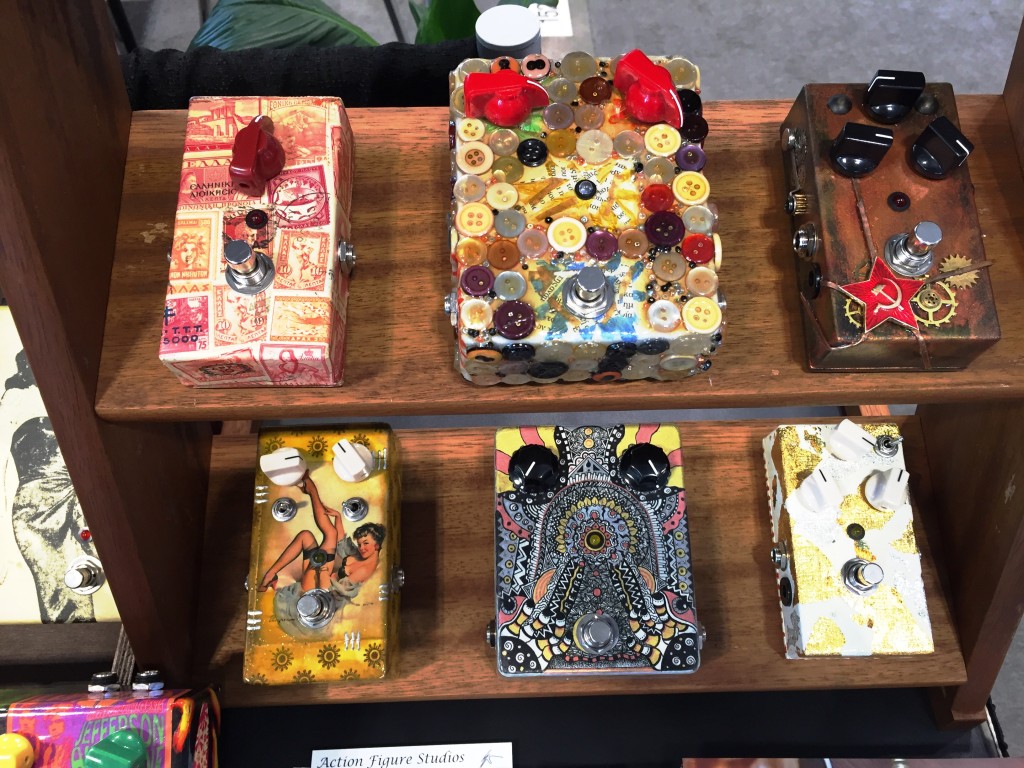 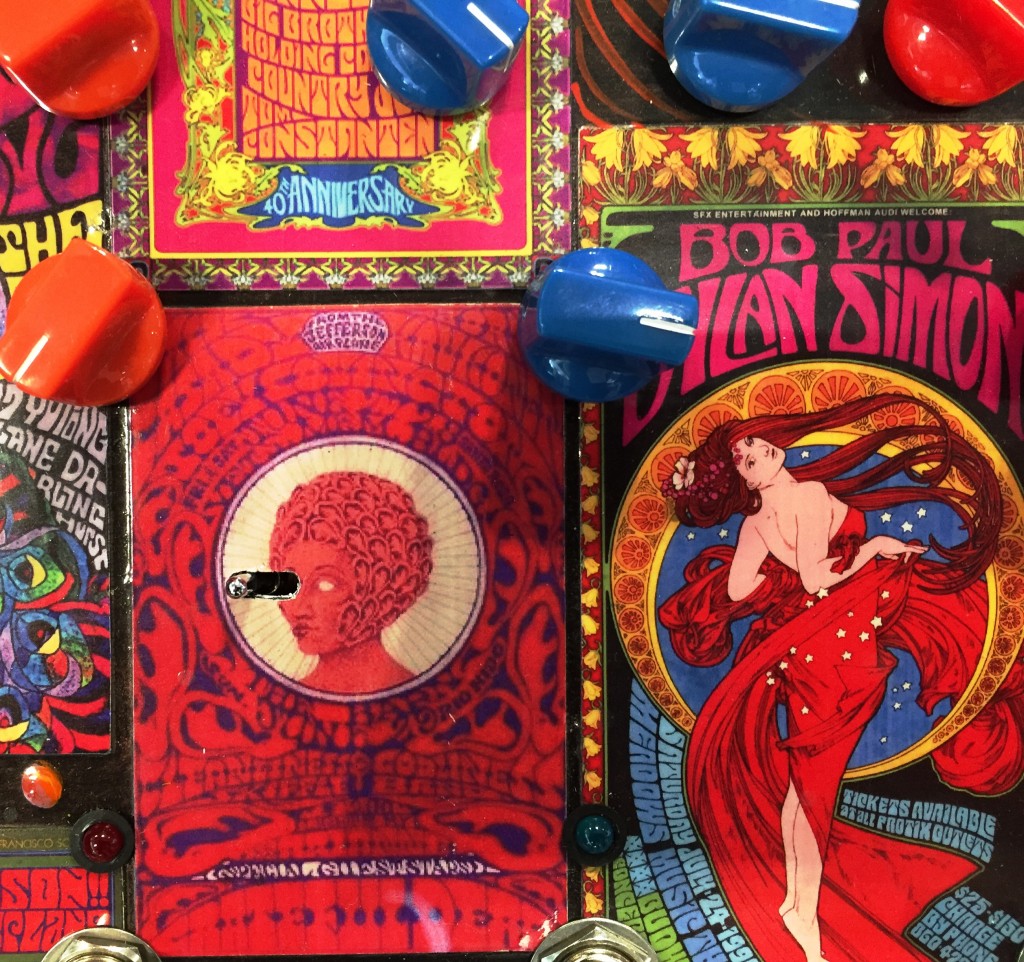 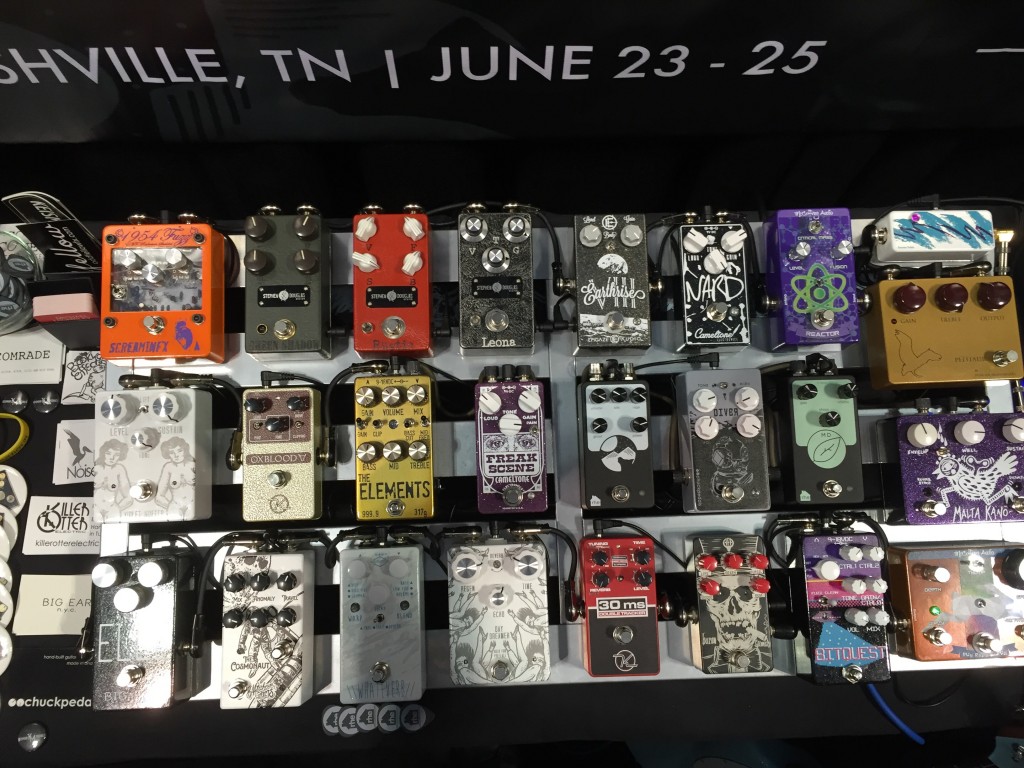