This year was the best NAMM in a while in general and especially for modern guitarists. Check out my extensive, modern guitar-centric report here. 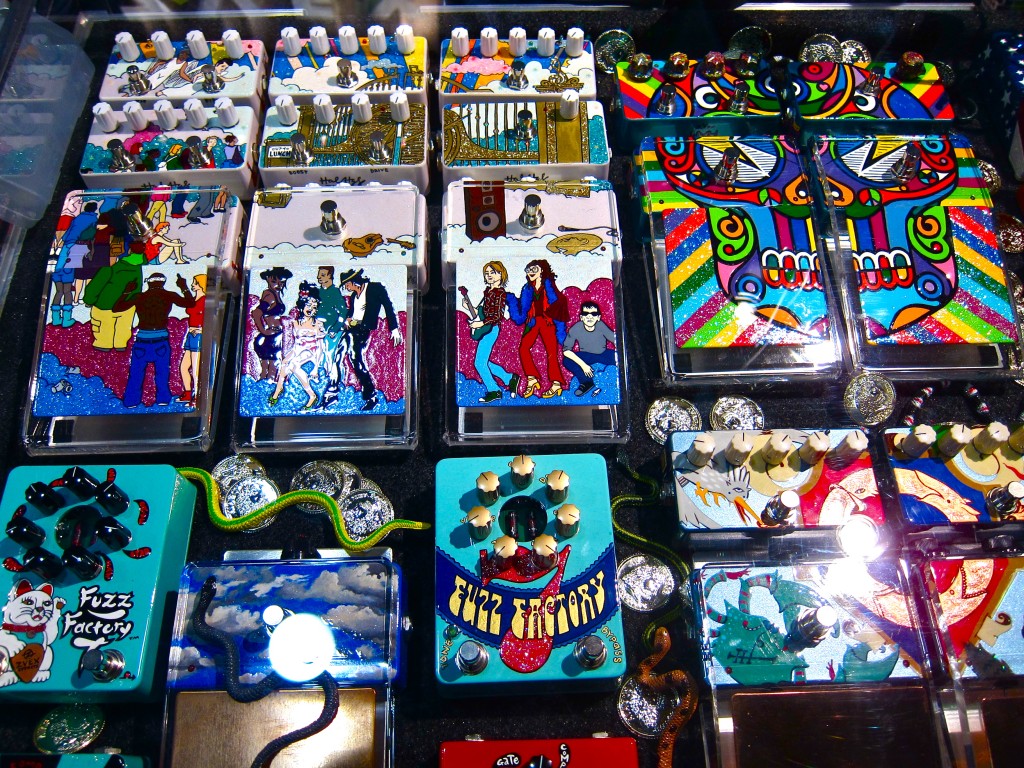 The 2014 NAMM show began with a bang on Thursday January 23. It was the most crowded it has been in years—always a good sign.

One was miniaturization: pedals keep getting smaller. So do knobs—tiny plastic ones that light up. 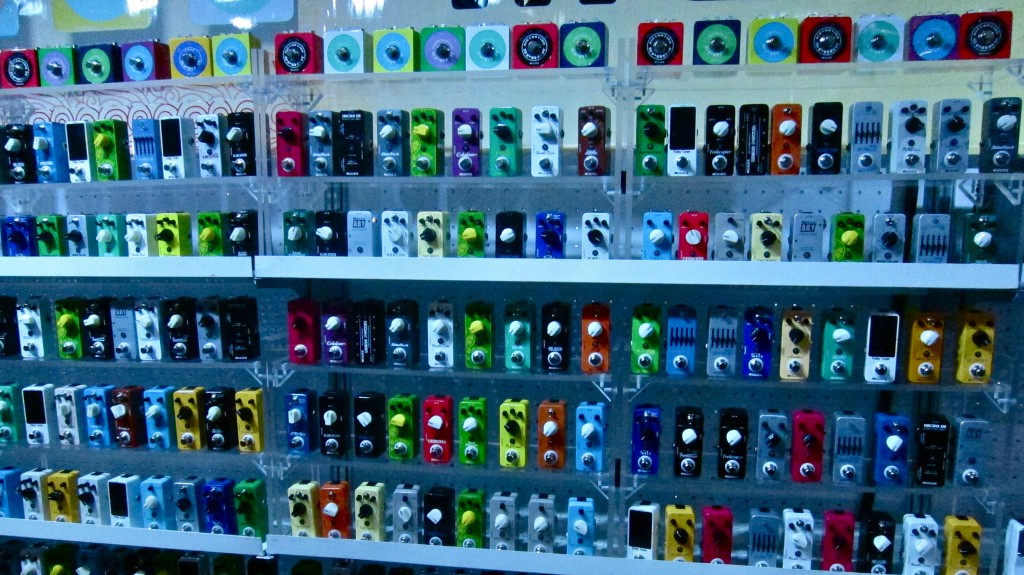 Why?—To feed our insatiable desire to fit more on a pedalboard—why else?

I found that to be a good sign, especially for the modern guitarist, as it signals a greater interest in new sounds.

iOS continues to be an increasing trend: From instruments to controllers, more and more music-oriented manufacturers are serving up software for iPads and iPhones

Bottom Line: There was an abundance of gear, er, geared to the modern guitarist so let’s get started. This is the stuff I found most interesting. Apologies to any companies I missed.

First some of the pedal oriented stuff because, let’s face it, we all love pedals

I almost missed the Logidy display but fortunately, while randomly passing it, I was intrigued by a sign that said Convolution Reverb Pedal. The ESPi reverb pedal has apparently been available for a couple of years, flying well under the radar. 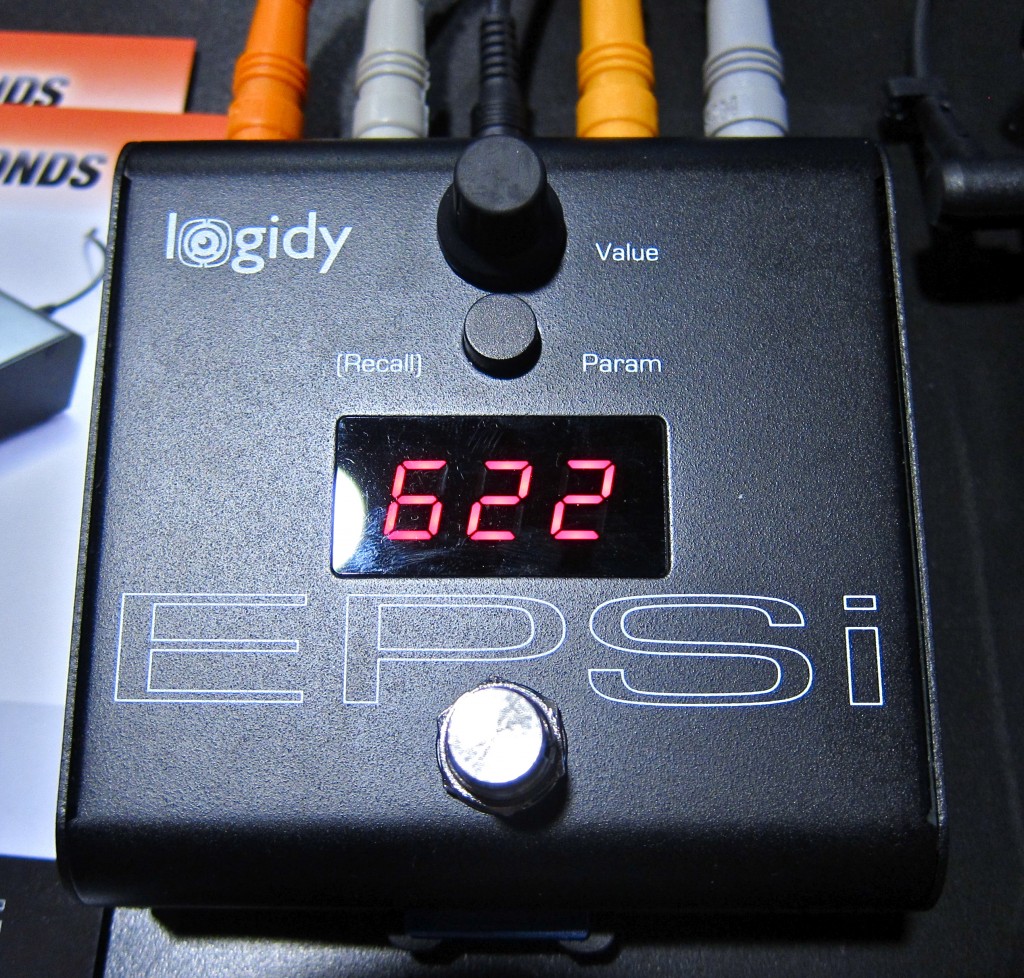 A DSP processor uses convolution to produce reverb sounds. The impulse responses are stored on an included SD Card that lists 114 sounds, including acoustic spaces, spring and plate reverbs, and special FX sounds. More impulses can be added to the collection using standard WAV files—and not necessarily reverbs!  The potential is awesome and price a steal. Look for a review soon.

This was another booth I almost missed. I have reviewed their Digitech Whammy controller that allows MIDI control over the Whammy pedal’s pitch shifting, whether to choose presets or set up pitch sequencer effects.

At this year’s NAMM, Molten Voltage was showing a dozen devices for controlling your effects pedals with MIDI. Check out their site for the wide range of MIDI solutions they offer, but as I love my MXR Carbon Copy Delay, the most intriguing for me was the Delaytion, a mod and pedal that lets you tap tempo, store presets, and control the modulation without going under the hood.

They also offer a pedal that allows more extensive control of the Strymon Timeline Looper.

The prize for my favorite new group of effects goes to this Greek company. Freaqbox  makes synth modules and have adapted much of this technology into pedals for guitarists.

You can also combine their controllers with their effects for some serious analog synth sounds. 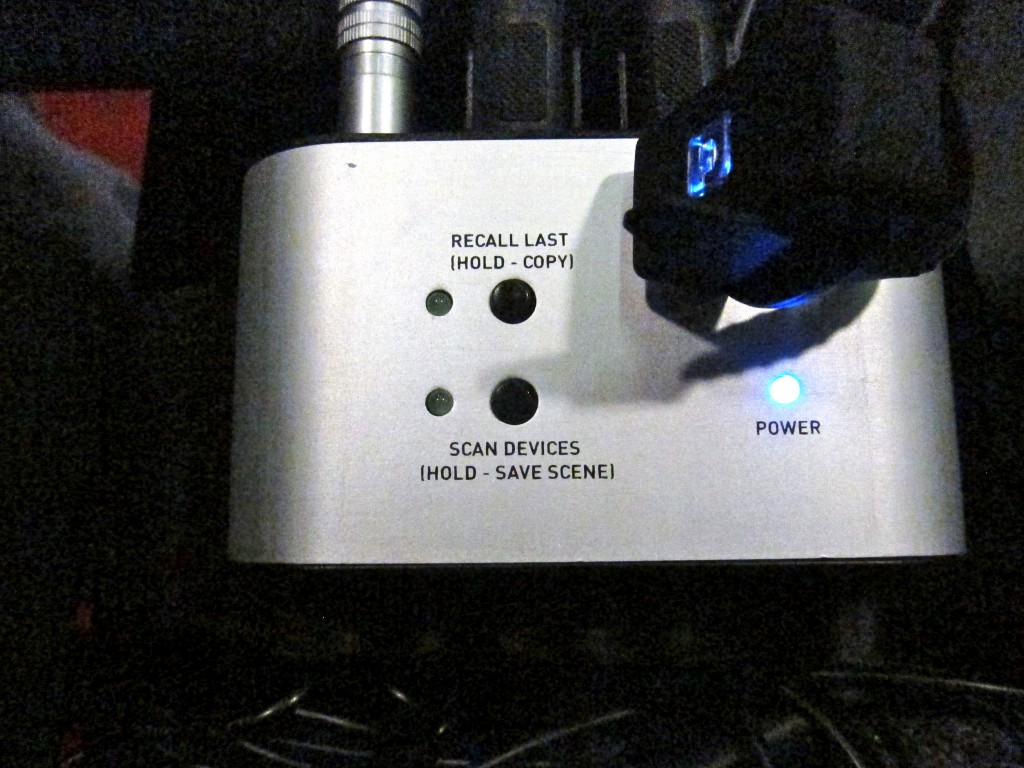 Source Audio revealed a prototype for a hub that can turn your Source Audio pedals and other MIDI controlled effects into one big multieffects. ControlBlox interfaces with Soundblox 1, 2, and Pro pedals, providing MIDI control of all Soundblox2 pedals and other pedals using MIDI control devices or software (via MIDI or USB). It allows firmware updating of all Soundbox2 pedals (via USB)., and all pedals can share one expression (or Hot Hand) signal. It will save and recall up to 128 “scenes” via MIDI.

Ben at Dwarfcraft served up a couple of prototype pedals. ARF is a cool fuzz with some fancy filtering, but Memento was my fave. The right switch lets you kill your guitar signal—so far so-so. But, get this, the pedal retains the rhythmic pattern of multiple kills that can then be triggered by the left switch for some glitch awesomeness! 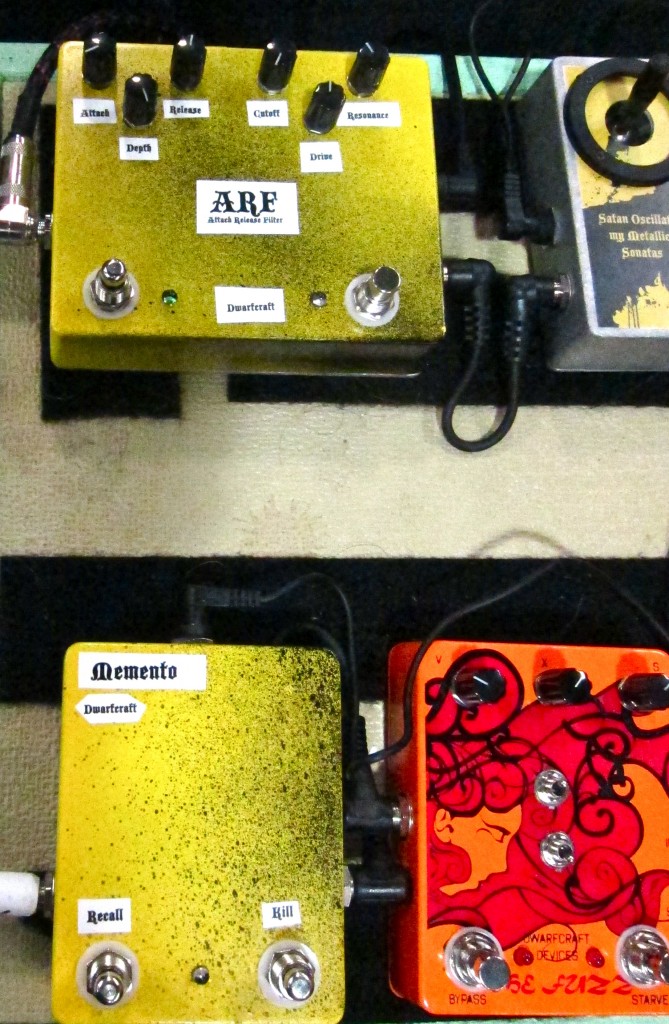 E-H unveiled 11 new pedals at NAMM. While nothing was quite as Avant as the 8-step sequencer from last year, the Slammi should excite those seeking a space-saving whammy pedal. After shooting this video, I sat down with the pedals and confirmed to my satisfaction that the Satisfaction Fuzz nails the “Satisfaction” riff tone—satisfied?.

The TC Electronic Ditto was well received by guitarists. But some wanted more. So here it is the Ditto X2

Earthquaker can always be counted on for new, offbeat, well constructed, reasonably priced, beautifully screened pedals. 2014 saw a pitch shifter with distortion, and a fuzz with a voice control that adjusts the mid voicing. 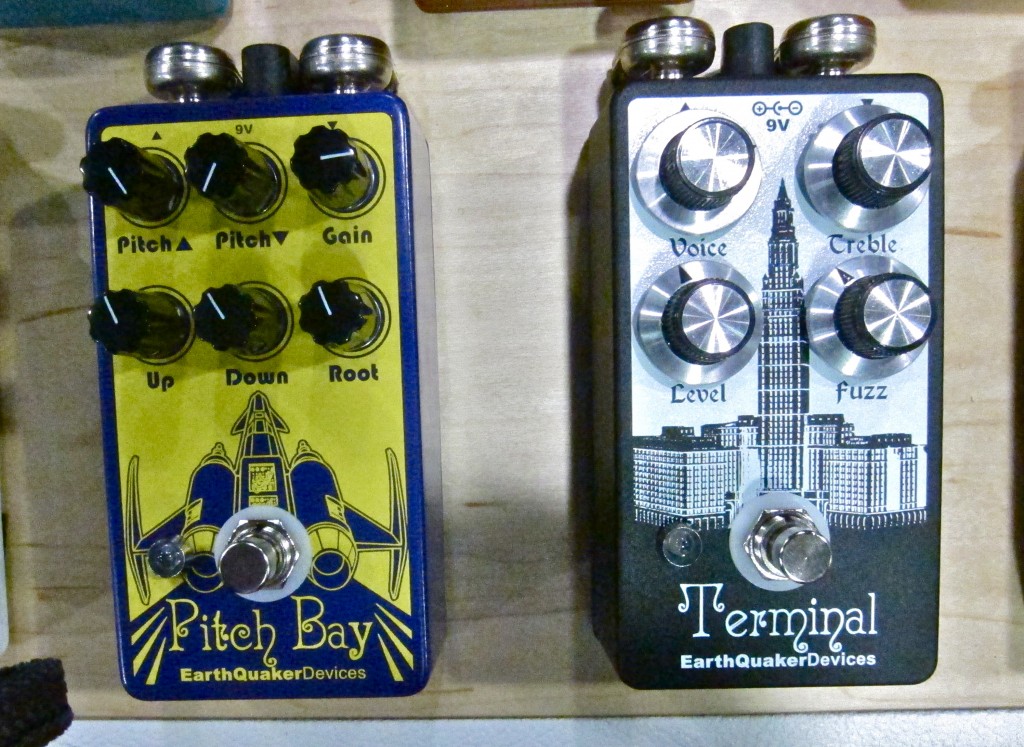 Tired of drummers who don’t show, show up late, or whine about the gig or money? Check out this drum machine Pedal from BeatBuddy. 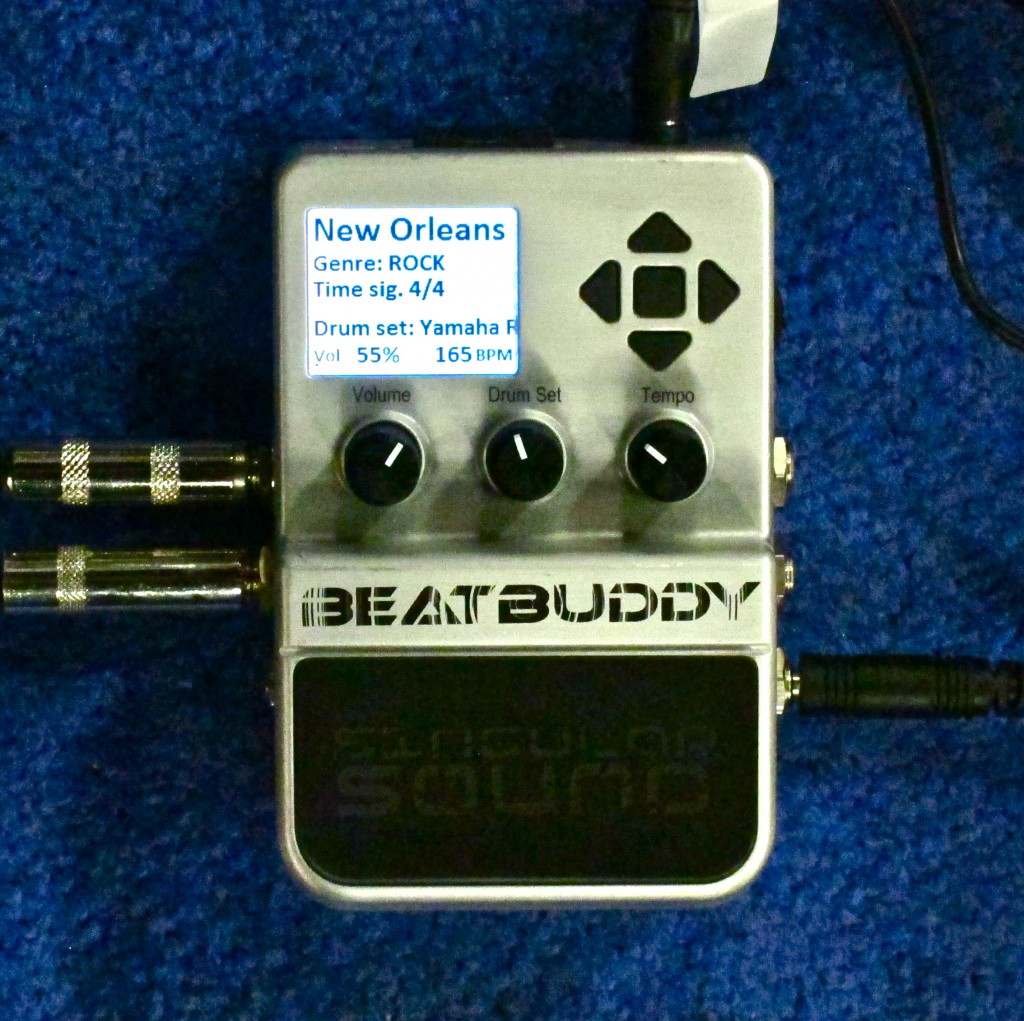 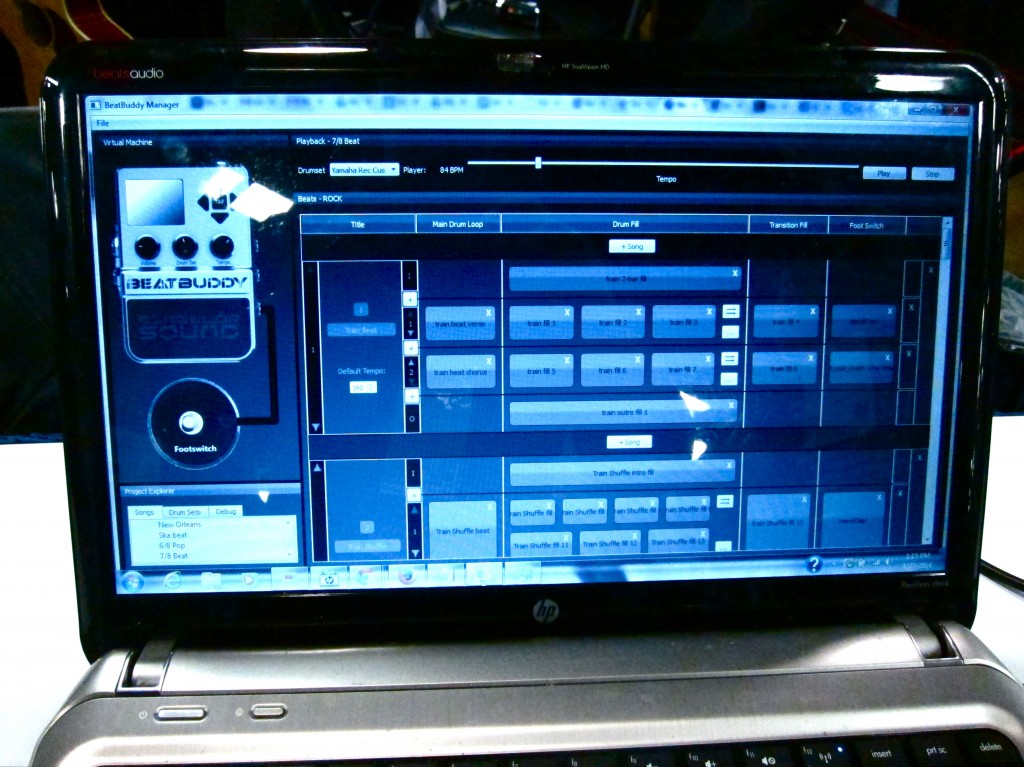 Commitment issues? Temple’s new quick release pedalboard lets you switch pedals in and out with ease.

Also promising from McMillen is a guitar sustainer built into Telecaster or Stratocaster bridge saddles with LED indicators available on an included pickguard. This one is probably a ways off but bears watching. 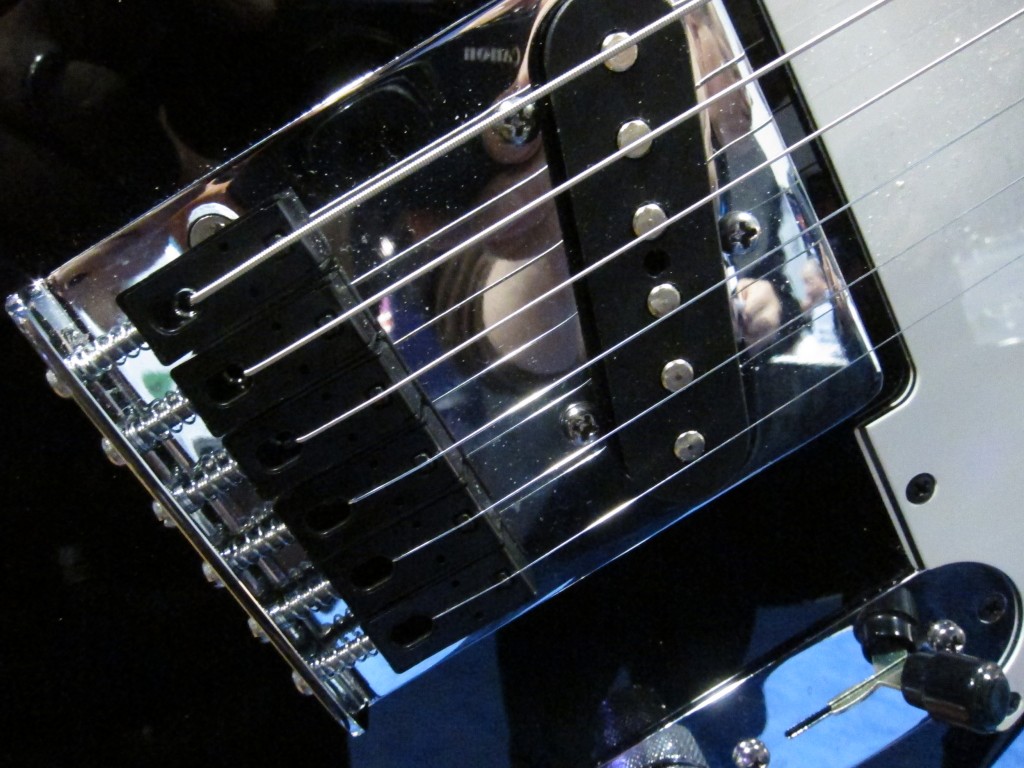 Tech 21’s new multieffects sounds good enough to be your main rig (through a power amp or PA), or for a backup in case your main rig goes down, or just for the fly-dates that lend it its name (note the tiny light-up knobs).

Walrus Audio  debuted a combo fuzz and trem, each with a joystick, 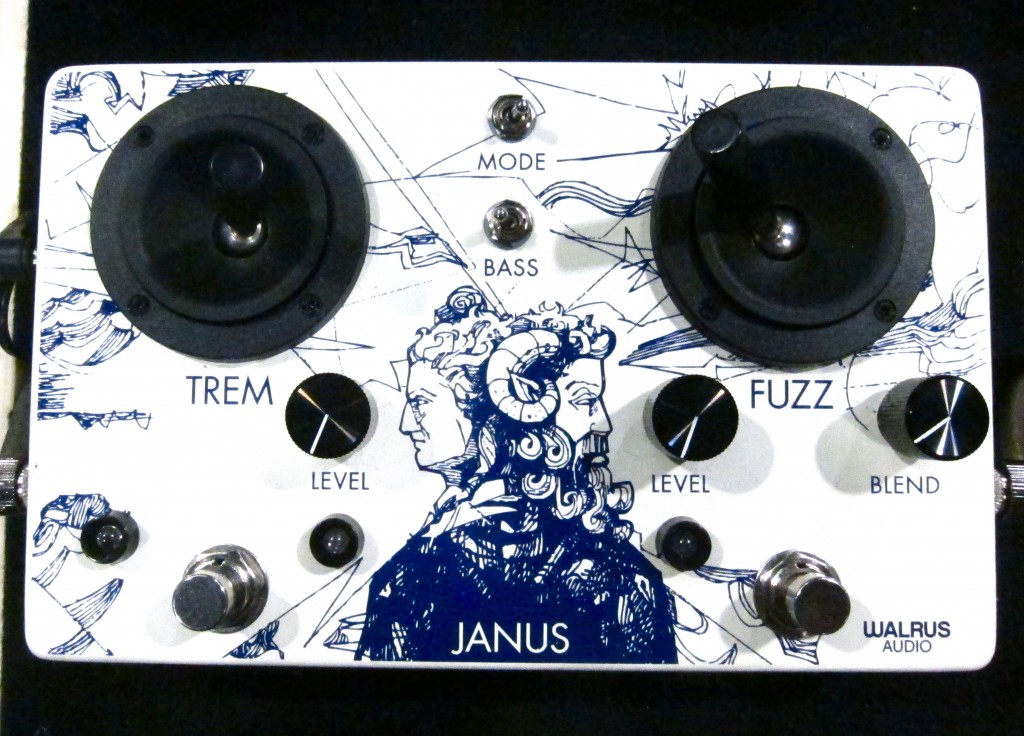 and a cool reverb with built-in pitch shifting and programmability. 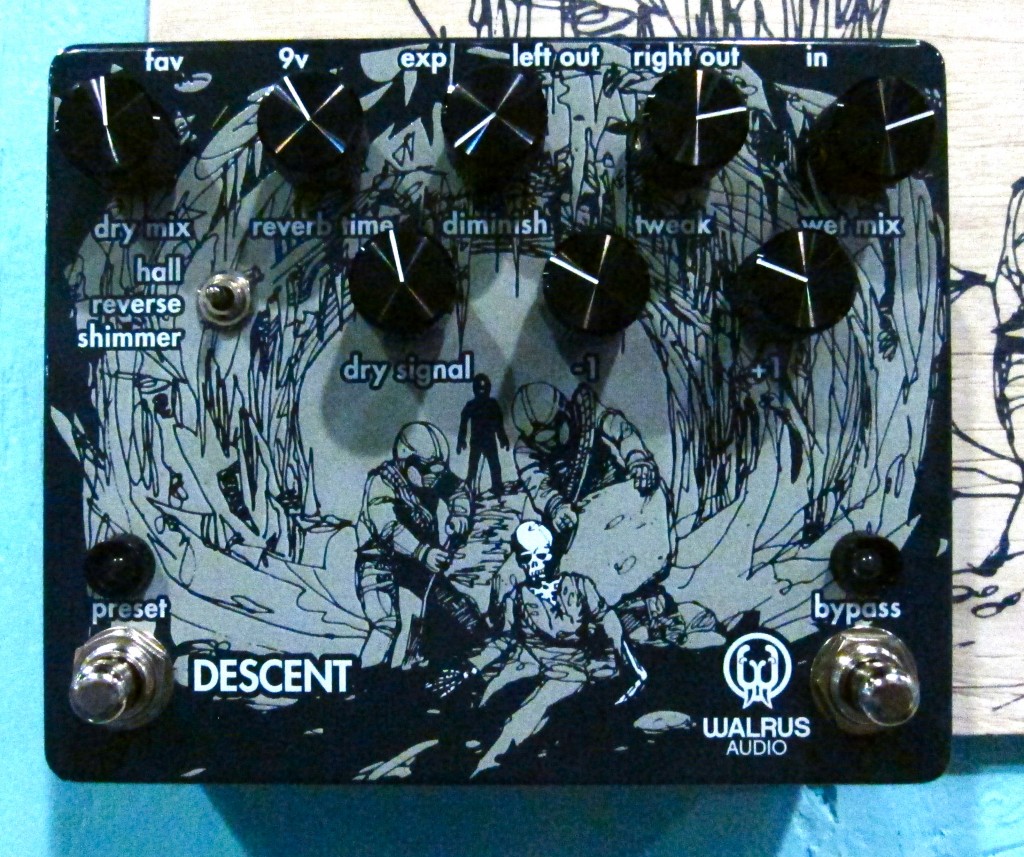 We previewed the Stompblox modular pedalboard at a previous NAMM. It is now shipping under the ownership of Digital Audio Labs. The boards  now include new flanges underneath for cable organizing. 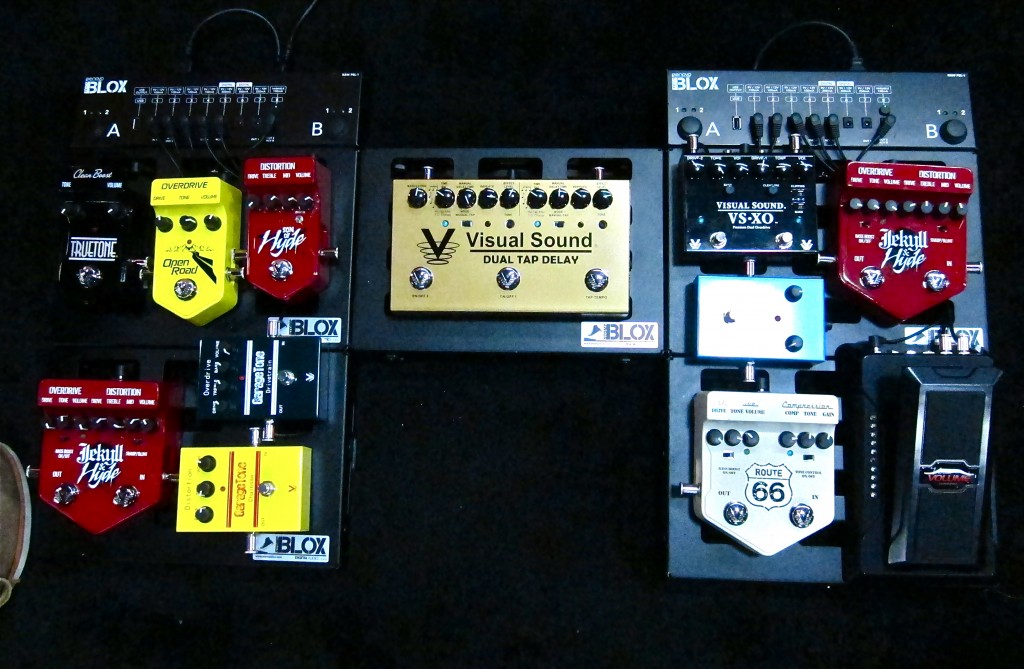 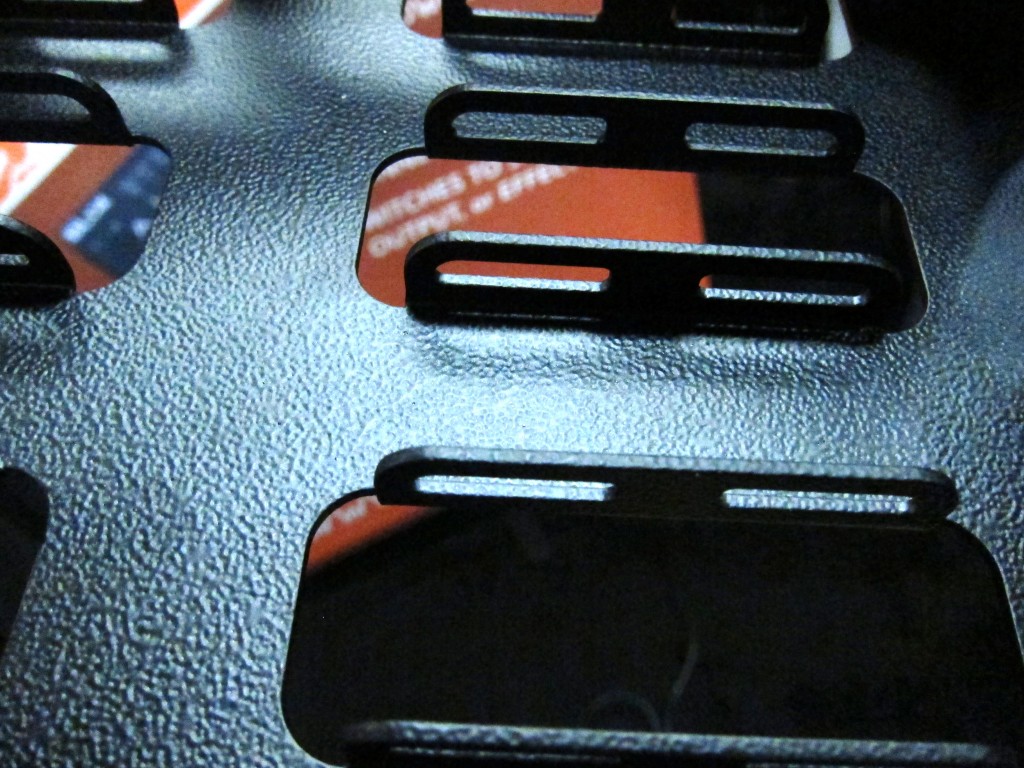 Even more interesting is their power supply, which can power eight units including Eventide pedals, as well as your iPhone or IPad. With more and more iOS apps being incorporated in modern guitar rigs, this is no small feature.

In step with the less-is-more trend, J. Rockett previewed a full line of small footprint pedals.

The Incident gTar is one of a number of products at NAMM  described as being for beginners or amateurs, when, in fact, they have enormous potential for pros as well. 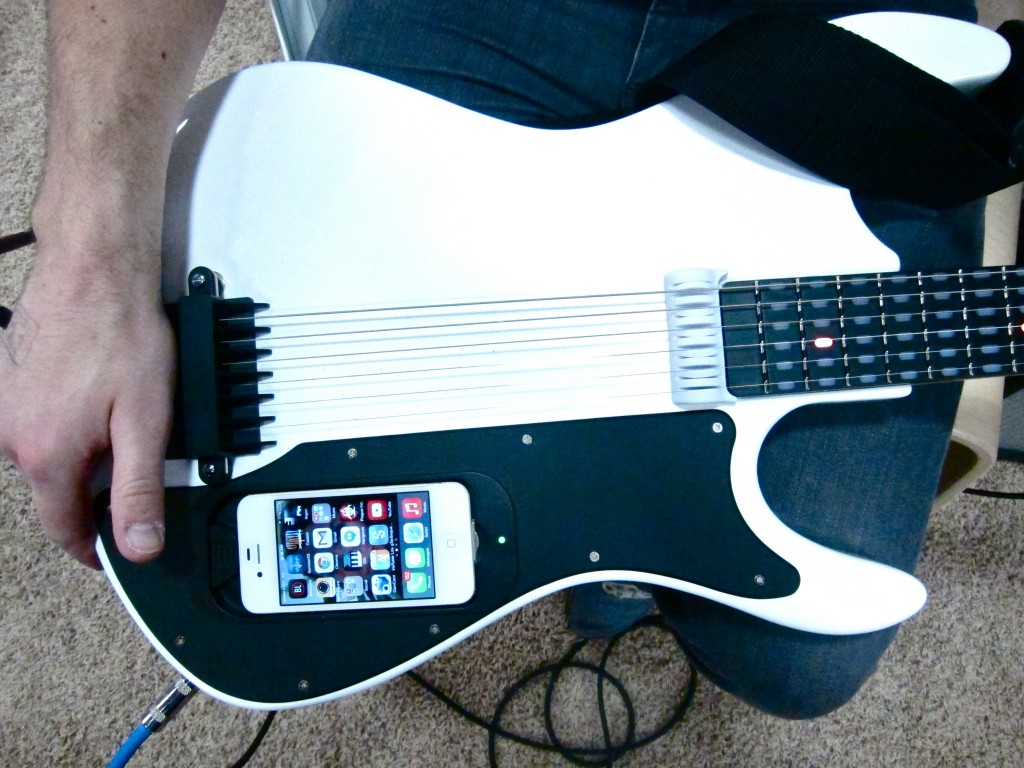 The gTar lets you plug in an iPhone and play iOS synths and effects, or run Ableton Live without the phone.

One stumbling block with guitar synthesizers is mounting the pickups, while another is the geeky look of the hardware. Godin circumvents both by mounting the terrific new Fishman Triple Play inside a pair of instruments. One is semi-hollow and the other a solidbody, both constructed with classic Godin care and offered at Godin’s usual affordable price points. 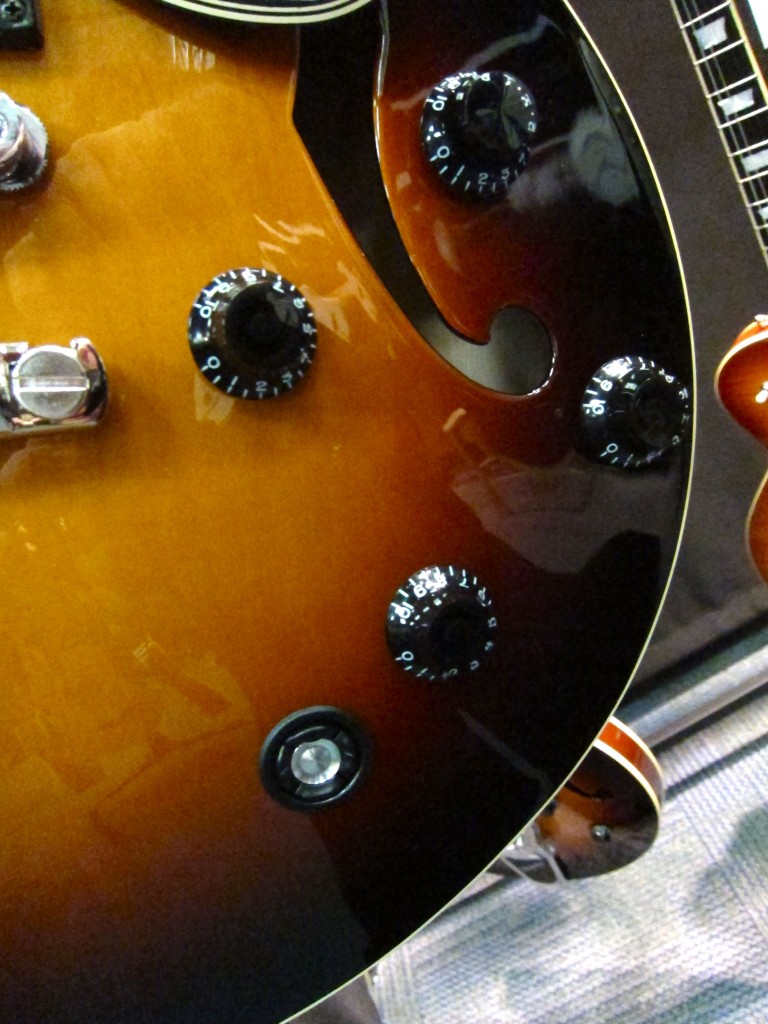 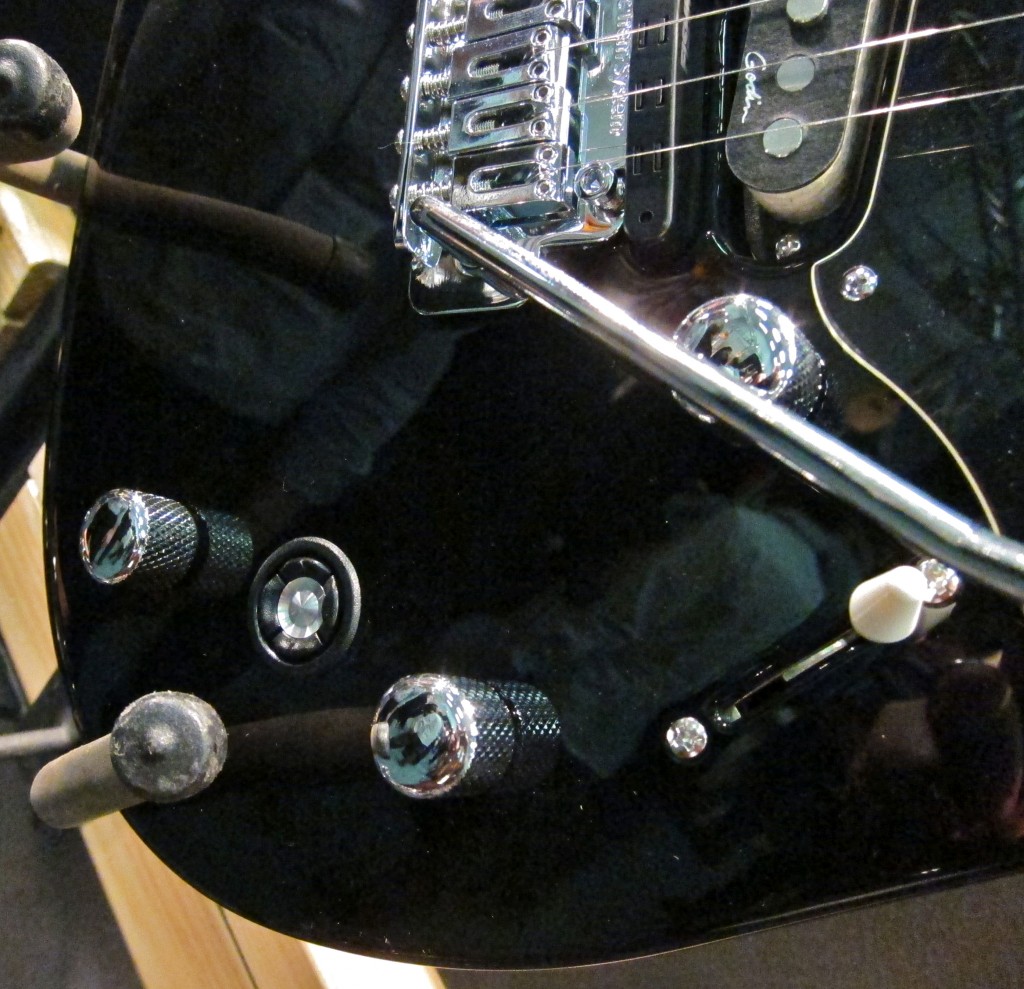 Another instrument being touted for learners but for ripe consideration by more advanced players and pros is the Seagull Merlin. The Merlin is a dulcimer style mini-guitar. While it only plays in one diatonic key, it has the potential to add a terrific texture that will fit into the densest recording. 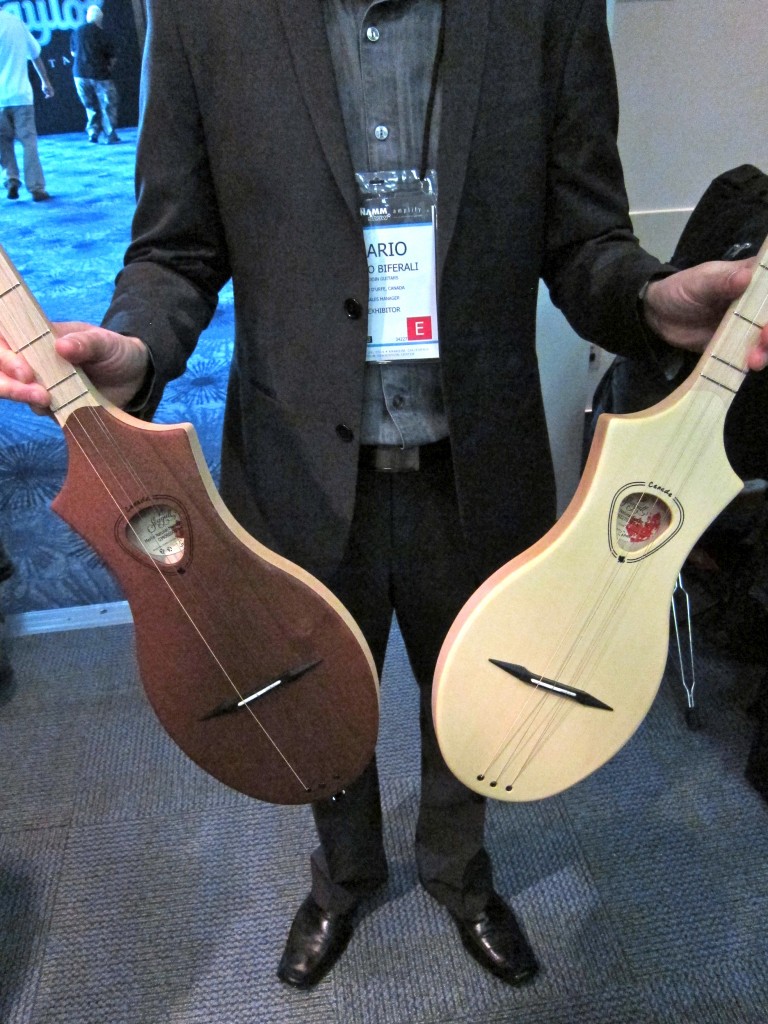 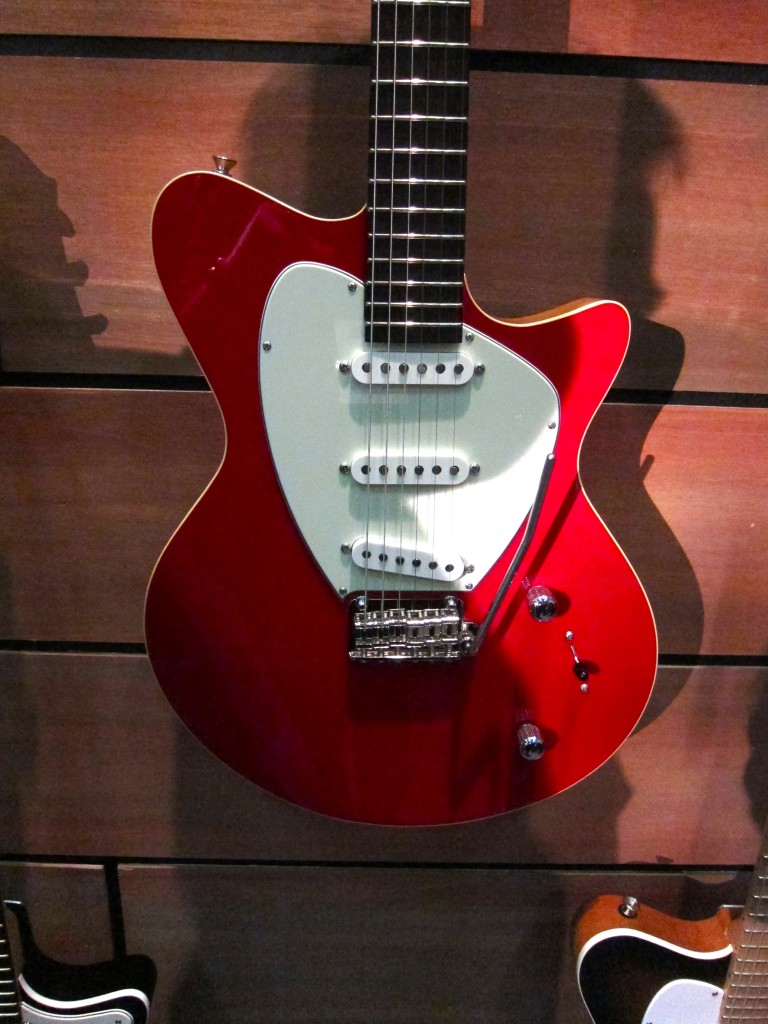 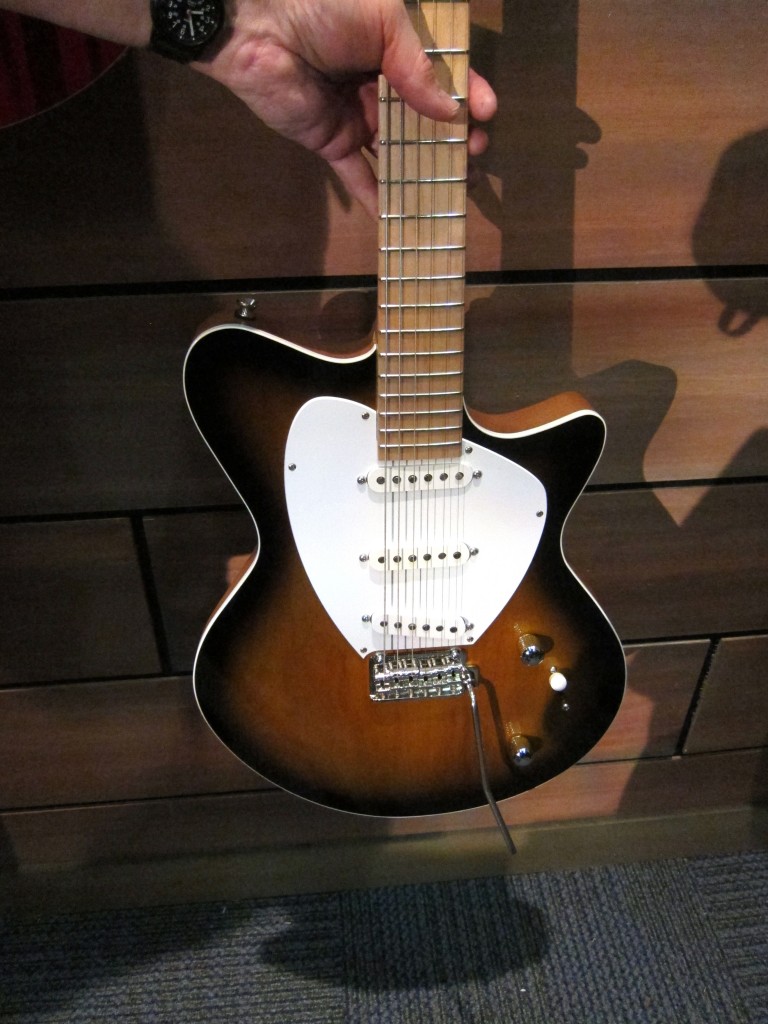 Dennis Fano’s guitars derive their modern cred through their relationship to mashup culture. Fano takes the best parts of retro instruments, throws them in a blender and makes them new again. At the same time he is astonishingly able to make them feel old—as in worn in and warm as an old shoe. This year he displayed some models that recalled Rickenbackers without aping them. 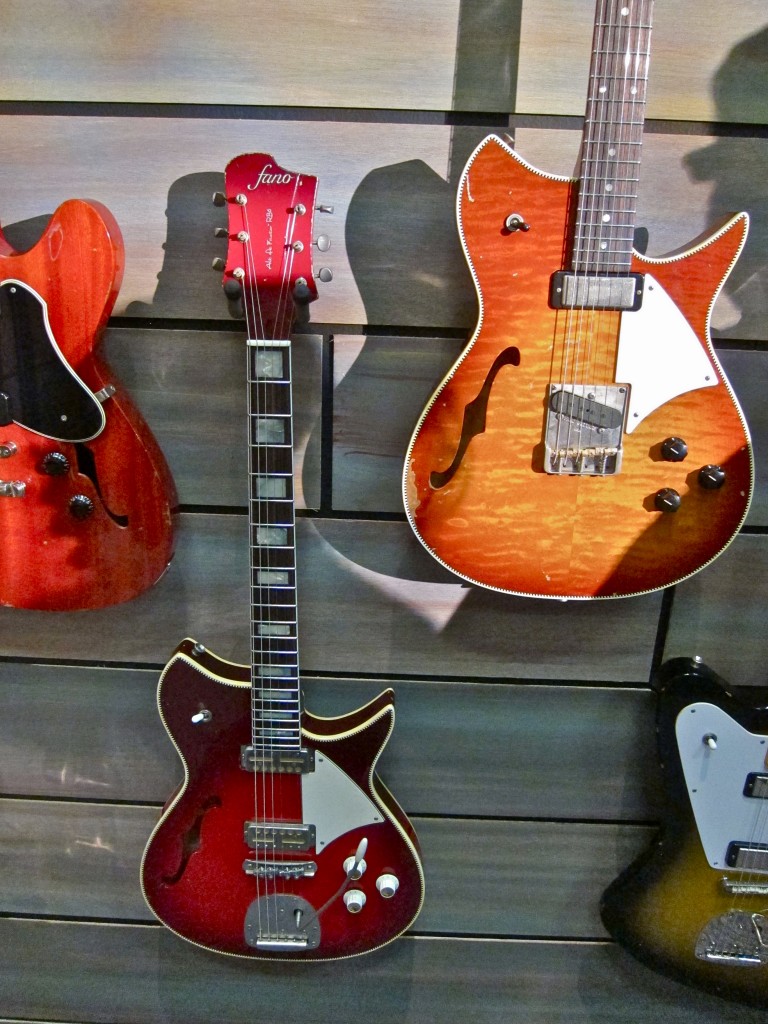 The new Two-Rock Crystal 22-watt combo sported a truly modern look and sounded awesome (Premier Builders Guild had their own room this year, so I could actually hear it). 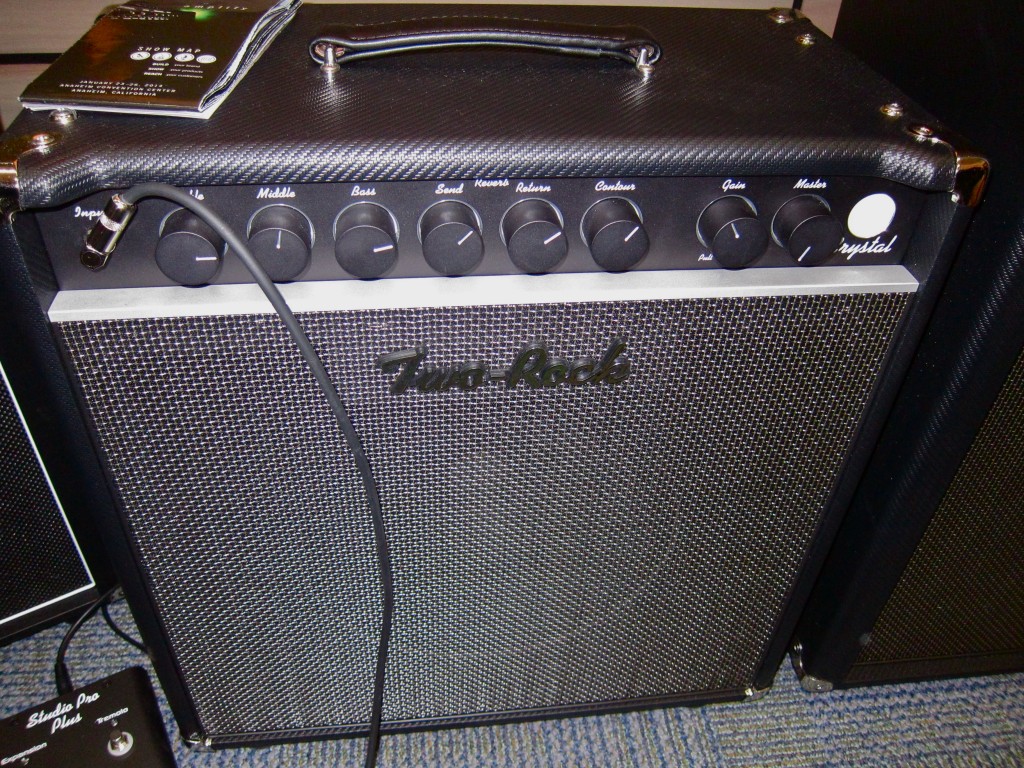 Now owned by Yamaha, Line 6 showed yet another product ostensibly for the bedroom player. The AMPLIFi amp is designed to let you play along with your favorite tunes, but its sleek lines and iOS control possibilities could make it attractive the more advanced modern player. 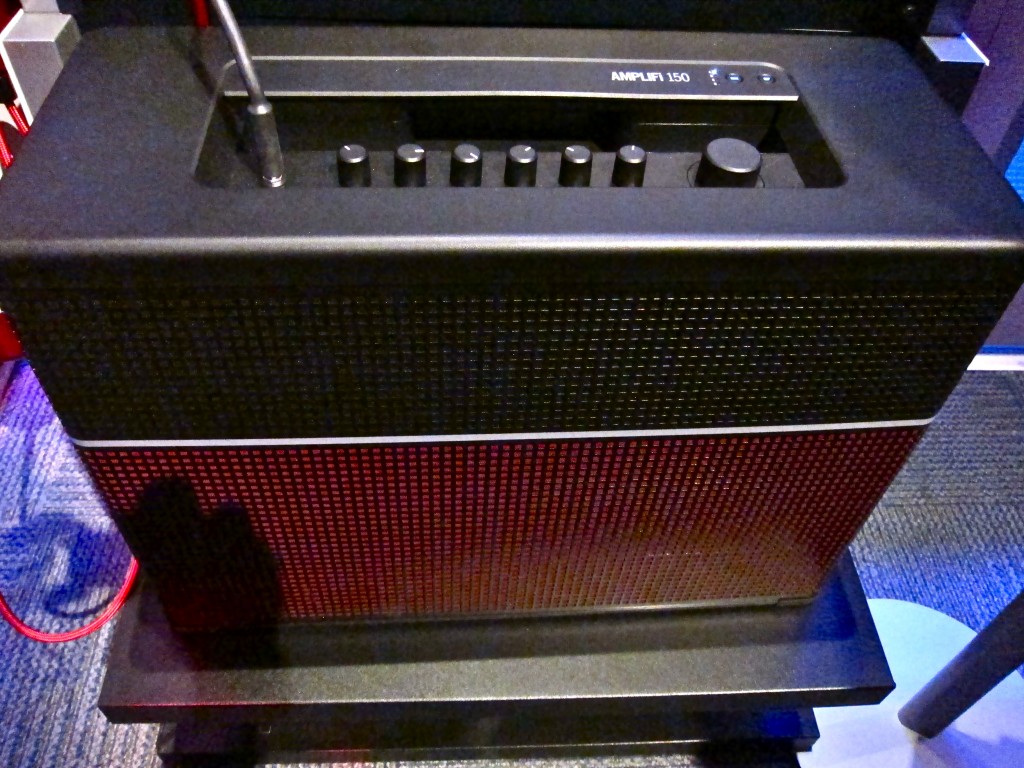 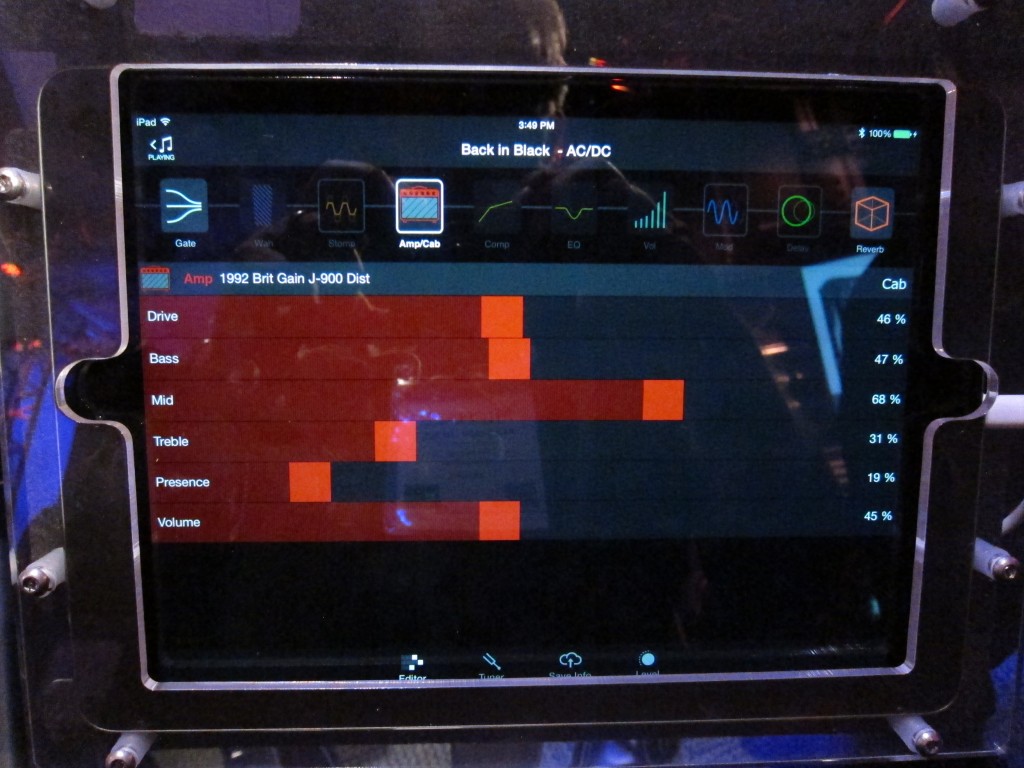 The Kemper Profiling Amp has been getting great press. What’s not to like about having hundreds of sampled (not modeled) amps at your disposal. Now, by adding a power amp to the profiler, the unit is ready to take on the road and can be sent to the PA, a cabinet (through a separate out that lets you disable the cabinet sample) or both. I actually got to play through it and must say it sounded and felt like a real amp—or, potentially, hundreds of them.

And just for fun, from Vox: 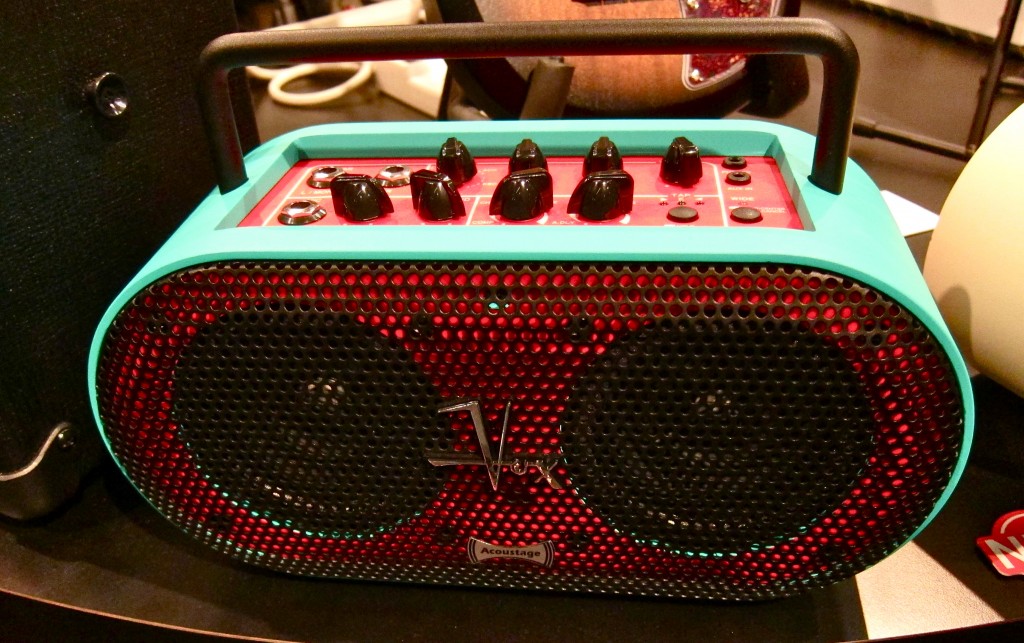