If you are looking for a great Fuzz Face or Big Muff clone, skip this review. If glorious noise is your thing, however, you have come to the right place. Benjamin Hinz at Dwarfcraft doesn’t make clones. He specializes in creating unique tones by tweaking transistors far beyond what they were meant to do. 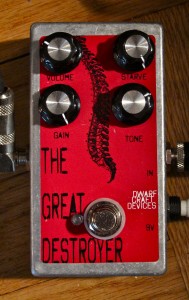 LESS IS THE SAME

I tested out The Great Destroyer (TGD) version that is housed in an MXR Dynacomp-sized metal case. It had the same controls as the larger version depicted in the Tone Factor Demo below: Volume, Tone, Starve (slows the power to the circuit), and Gain.

I plugged my 1965 Fender Stratocaster with DiMarzio Virtual Vintage pickups into TGD, then into my pedal board and finally into an Orange Tiny Terror and an Egnater Rebel 30 head. The Strat is wired with two master tone controls, each offering different capacitors. This added to the fun, as TGD is an incredibly interactive effect. With the pedal engaged, turning each tone knob down resulted in a different set of sounds.

With all the effect knobs full up (save for the volume), the Dwarfcraft pedal released a wash of massive distortion with an undercurrent of sputtering, like amp-on-the-verge-of-dying. Backing the volume knob of the instrument down just a bit largely removed the sputtering for more straight-ahead, but thinner, fuzz. When I stopped playing, the sputtering turned into an industrial rhythmic chop whose tone and pitch were affected by pickup position and tone control settings.

This was just the beginning. With The Great Destroyer you play the pedal as much as the guitar. It begs to be placed on a table, or for you to don kneepads and get down on the ground. Twisting the Starve, Gain, and Tone knobs unleashed horrific (in the best sense) noises, ranging from a wide variety of alien insects to police helicopters circling the crime scene. Hissing steam and squealing oscillation also ensued.

PLAYS WELL WITH SOME OTHERS

TGD wasn’t happy going through my Jetter Jet Drive but found a kindred spirit in the Bone side of my Trombetta Feederbone. It also loves a slightly distorted amp. Through the Tiny Terror, set for slight breakup, I could roll back the guitar volume to reduce sputter, while TGD turned that mildly overdriven sound into a wall of fat fuzz.

You probably won’t be bringing The Great Destroyer to the next blues jam (except to protest blues jams), but if you revel in room-clearing noise or extreme sound design (you can put drums or vocals through it as well), you won’t find this particular kind of sonic madness anywhere else.