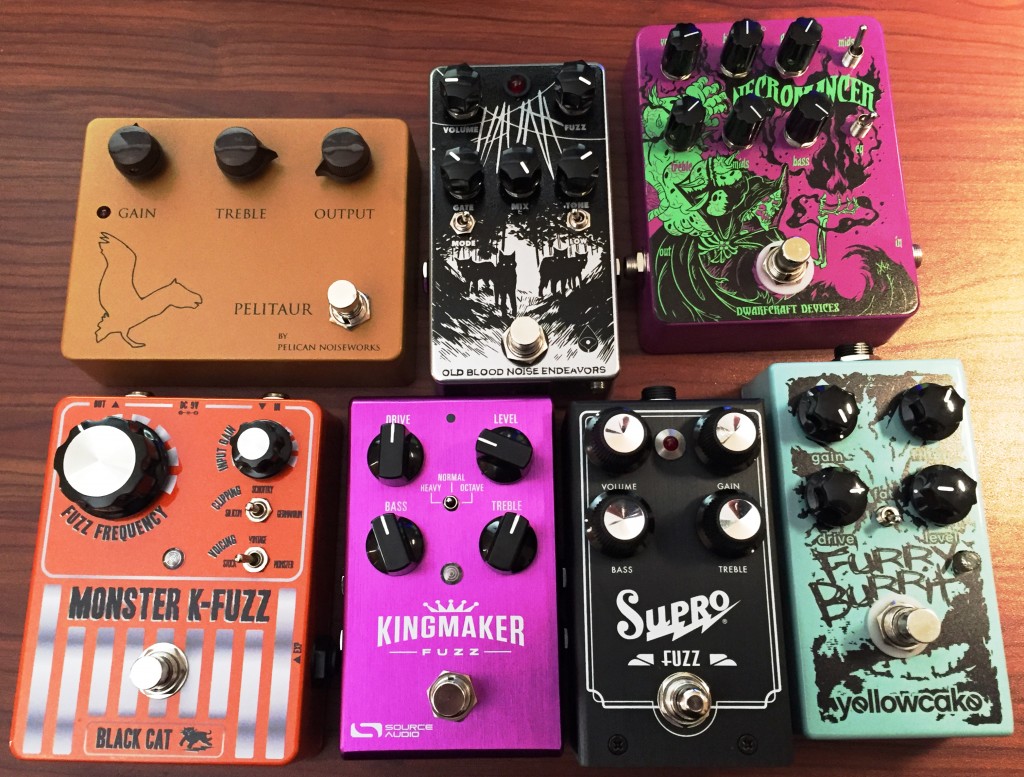 I tested all of the fuzz pedals with a Fernandes Strat fitted with DiMarzio Virtual Vintage pickups. They are hum cancelling so any noise you hear is from the pedal (any high gain pedal is bound to produce some noise unless gated). I ran the pedals into a clean Little Walter 50 Watt head through a single 12″ custom-built cabinet housing an Eminence Texas Heat. I miked it with a Shure SM-57 and recorded through a Focusrite interface into Quicktime. I believe the sounds in the videos are representative even if the images are a little bit, well, fuzzy.

The Monster K-Fuzz stompbox is Black Cat’s latest version of their hot-rodded ’60s Kay Fuzztone model. The stompbox edition has all the features of their treadle-based edition in a more pedalboard friendly size, and at a more affordable price. An expression pedal input to control the Fuzz Frequency allows the same functionality as the former treadle-based model. It offers a 3PDT true-bypass switch and runs on either a 2.1mm Boss style power jack or internal 9V battery.

The hand-wired pedal’s powder-coat Orange Sparkle finish is initially striking. An Input Gain knob controls the amount of signal going into the pedal. A setting of around two o’clock is recommended for single coil pickups, and noon for humbuckers. I could overload the fuzz circuit with either type pickup by cranking the input gain all the way for more compressed sustaining fuzz mayhem.

A three-position mini-toggle lets you choose the clipping mode. The far left position engages a silicon diode pair, far right is a germanium diode pair, and middle is a Schottky diode pair. Another three-position mini-toggle chooses the voicing of the pedal. Vintage is the voicing of the original K-Fuzz. Stock was a little fatter and more aggressive, while Monster added low end and compression.

An oversize Fuzz Frequency knob lets you adjust the tone with your foot during performance, should you not want to use an expression pedal. Using a pedal overrides this knob. I found that a Source Audio Dual Expression pedal worked better than an M-Audio one. Either way, this is not a fuzz wah or synth-style filter. The pedal produced a subtler, but expressive tonal sweep.

There is no output knob. Reducing the input gain changed the compression level somewhat but had little effect on the output volume. Depending on the clipping mode, the relative output to bypass changed significantly. I was playing the pedal through a clean amp setting; playing through a slightly overdriven amp should compress the sound and make the volume variations somewhat less extreme. An internal trim pot can adjust the overall output volume of the pedal; if you tend to favor a particular mode, setting and forgetting it should be fine. I enjoyed the different clipping modes so much, it made me wish for an output gain knob on the surface.

The Black Cat Monster K-Fuzz delivered appropriately monstrous crunchy riffs at the low end of the fretboard and awesome octaves at the upper reaches. In the studio, the nine different settings will all find their uses, but any one of them offers some serious fuzz.

The Pelitaur is like one of those insects that camouflages itself; appearing like a different animal to confuse predators. Yes it looks like a Klon Centaur, but the joke is that, in fact, it is two distinct fuzz circuits running in parallel. What is not funny is how great they sound.

Turning the “Gain” knob to one side produces a lush “Muff” sound, while rotating it to the other side offers up a more spitty sound. Unlike the bias or voltage driven spitty sounds offered in many fuzz pedals, the Pelitaur doesn’t loose any sustain, even at extreme spit settings. As you turn the Gain knob from one side to the other, the sounds blend in continuously musical and interesting ways.

The “Treble” knob is a tone control that works oppositely depending on which way the Gain is turned, and it too contributes to interesting textures when the two sides are blended. No camouflage or irony happening with the Output knob, which adjusts the overall output level of the effect. There are internal trim pots to adjust gain level of each fuzz, if desired. The Pelitaur runs only on standard 2.1mm 9V negative center power, while drawing 3mAs.

The concept of the Pelitaur housing is hilarious, but the rich harmonics and sustain of the pedal are no joke.

This original circuit design by Thomas Elliott purports to offer the sustain of a silver box Big Muff, combined with the harmonic signature of a Tone Bender MkII, and the unrivaled touch dynamics of a germanium Fuzz Face. It uses an N.O.S. Germanium transistor in the first stage, followed by secondary, silicon-based gain. The control layout comprises simple Volume, Gain, Treble and Bass knobs. The EQ is drawn from the tone stack found in Supro’s tube amplifiers. Both Bass and Treble controls are capable of cutting or boosting within their respective frequency bands.

The Supro Fuzz offers a TRS port for expression pedal control of the Treble knob, which, like the Monster K-Fuzz, does not turn it into a fuzz-wah or synth-like filtered distortion, but rather offers foot modulated accentuation or taming of the high frequency content. It can be powered by a 9V battery or AC power, drawing below 20mA, and offers true-bypass switching.

You can judge for yourself if the Supro evokes any or all of the above referenced fuzz sounds, but there is no doubt that it produces a fat fuzz tone that is uniquely its own. At lower gain settings it is dynamic and responsive to pick attack or guitar volume. At higher settings, the gain is massive sounding. I found the Supro fuzz to have its own voice, a rarity in the brave new world of pedal clones, and it is a voice that I found inspiring.

The Old Blood Noise Endeavors Haunt is a gated fuzz, with many textures that can be summoned with the Volume, Gate, Fuzz, Mix and Tone knob controls. The Haunt also has toggle switch for Mode, to switch between two combinations of silicon transistors. Another toggle adds an additional low-end boost to the effected signal. It is powered by a 9VDC – 2.1mm negative center pin adapter and draws 20 mA. Daniel Danger tinymediaempire.com supplied the art.

This is not a pedal for classicists. Both the fuzz and the gating of the Haunt are extreme. At maximum gate and fuzz setting the Haunt serves up some cool noise that can be “controlled” with the guitar’s volume knob. At less radical fuzz settings, the compression level of the Haunt can reduce the attack to where it creates almost a backward guitar effect.

I found two ways to increase the guitar attack. One was to lower the guitar volume to reduce the input level. This produced no drop in fuzz amount but did increase the string attack. The other was to use the mix to blend in original signal. Depending on the amount of fuzz level, this could blend the attack of the guitar with the fuzz, or create an interesting effect where the fuzz swelled up behind the original signal.

The Haunt is a fuzz that begs the modern guitarist to throw off the shackles of “standard” sounds and revel in the freedom to invent new ones.

The Necromancer started as the Super Fuzz style circuit from the Dwarfcraft’s Silver Rose v2. They then added a middle band to the EQ. The Mids knob is tuned to the deepest frequency dip created by flipping the “Mids” toggle down, letting you fine-tune the scooped tones. The evil wizard art is courtesy of Metalocalypse veteran SMO, a long time collaborator at Dwarfcraft. The pedal is true bypass, and can be powered by the standard 9v center negative power adaptor.

With the EQ enabled, the Necromancer can deliver guitar speaker destroying bass, seriously hyped or scooped mids, and cutting treble; all proved potentially musical in the right combination. The bias control can be used to control the sag or create bit-reduced tones. It also affects the tone, which can be handy when the tone circuitry is bypassed.

For a company known for radical tone sculpting, the Necromancer is capable of many classic fuzz tones and even, dare I say it, blues style dynamics. But Ben hasn’t gone all rootsy on us; with the right combo of knob and switch postiton there are plenty of new and exciting textures possible.

The Furry Burrito hovers in and around overdrive, distortion and fuzz. Through interactive Drive and Gain knobs it can produce grit from warm overdrive to saturated Big-Muff like sustain. A Voltage trim knob helped adjust the hardness and softness of the pedals response, while also yielding the potential for more sputtering style effects by starving the circuit. Extreme voltage settings induced feedback and some oscillation when holding notes for an extended period. There is also a Fat switch for more bass, and Filter knob to adjust treble. The Fuzzy Burrito can be powered by a 9v Battery or 2.1mm negative center9vdc adapter, drawing about 18 mA.

Manipulating the relative levels of Drive, Gain, and Voltage created an amazing variety of dirt. The Fuzzy Burrito is another pedal that eschews cloning a vintage tone for producing a plethora of musical sounds of its own.

Like the rest of the new Source Audio One Series pedals, The Kingmaker Fuzz operates on two levels. For those that want a no-frills fuzz that offers simple Drive, Level, Bass and Treble knobs, and three toggle switchable fuzz options (Heavy, Normal, Octave), this is an easy to use, versatile fuzz right out of the box. It’s fat sound belies its digital distortion origins and rivals many analog fuzz effects.
As advertised, the Heavy setting served up a highly saturated yet articulate fuzz for violin-like lead tones with mucho sustain as well as thick rhythm sounds. The Normal engine provided a more dynamically and guitar volume responsive, Fuzz Face style fuzz (more silicon sounding than germanium). The Octave setting brought octave fuzz in the style of vintage Octavio pedals. On the upper strings at higher frets I got a clear, accurately tracking upper octave. The Kingmaker octave setting also allowed the ring modulator and sitar-like sounds available in classic octave fuzz pedals.
You could stop there and have a great sounding, versatile fuzz at a reasonable price. But, for those unafraid of a little technology, which should include most GM readers, connecting the Kingmaker to Source Audio’s free Neuro Mobile App (for iOS and Android) accesses a big collection of additional overdrive, fuzz and distortion tones, which can then be downloaded directly to the pedal and, if desired, stored as presets in any of the three toggle positions along with their saved parameters, regardless of the knob positions. It also provides extended parametric EQ capabilities, stereo routing options, internal stacking functionality, and lets you select either analog buffered or relay based True Bypass. There is much more that you can check out on the SA site.
The pedal comes with 9v DC power supply (300mA / Negative Tip). It draws150mA. A USB port connects the pedal to Mac or Windows PC for firmware updates and the forthcoming in-depth effects editing software.
For those with MIDI pedal boards or drawers, Source Audio’s Neuro Hub ($99) lets you program 128 different types of grit with individual tone, level, routing and gain settings to be chosen at the touch of your MIDI controller.
Does it sound exactly like a vintage analog fuzz? You can decide for yourself. The Kingmaker does offer wide variety of great sounding overdrive (try the OCD emulation), distortion, and fuzz options in a single pedal that can be as simple or as complex as you choose.