Things have been so busy I just got around to checking out the SpaceTime algorithm that showed up in my February H9 Max app update. In addition, since my H9 Max review I have had my main pedalboard rewired, replacing the Electro-Harmonix Ring Thing with the Maxed out H9. The H9 covers all the sounds the Ring Thing provided—octaves, “baritone,” “Leslie,” “12-string,” ring modulation, and, of course, the H9 does so much more. Consequently, now seemed like a good time for an update on this amazing pedal. Since Brett Kingman did such a good job of demoing the various SpaceTime presets, I offer his video, and then will discuss my experience with the new algorithm, as well as how the H9’s pre and post routing feature came in handy on my board.

One of the few complaints about the amazing sounding H9 has been that you can only use one effect at a time. For those, ready to invest serious cash in their rigs, the answer has been to buy two H9s, thus being able to run, say, modulation and pitch effects on one and ambient effects (reverb, delay) on the other.

Now, the SpaceTime algorithm offers the option of three simultaneous effects: modulation, delay, and reverb. It is not the first H9 algorithm to allow multiple effects: the ModEchoVerb setting of the Space algorithm offers reverb, delay and modulation, much like SpaceTime. The difference is that the effects in SpaceTime are much more tweakable. They also sound much better than the ModEchoVerb setting, as if Eventide has figured out a new way to harness the H9’s processing power for more fidelity when using multiple, CPU hungry effects. 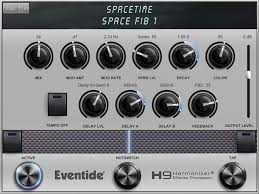 SpaceTime offers two Delays with separate control of level and feedback; Modulation, with amount and rate controls; and Reverb, with tweakable decay, level and color. Another way SpaceTime differs from ModEchoVerb is that you get to control the way these three effects interact. You can feed the first delay into the second (or not); route the delay into the reverb or run them in parallel (I was amazed at the additional clarity parallel provided), and more. A new interface in this algorithm, called Pedal View, gives you a visual representation of the routing. 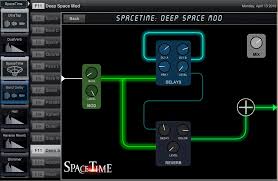 One thing I loved was being able to put the reverb in freeze mode to hold chords while I soloed over them and still have delay for ambience.

I still recommend Max (which now includes SpaceTime) to anyone who can afford the $699, and many will still want to buy two H9s so they simultaneously run things like pitch shifting and reverb. I can also see buying an H9 Core for $399 with its included H910 and H949 pitch and delay effects algorithms, and then adding SpaceTime for an extra $20. That setup could easily replace at least three pedals on your board, while improving your sound immensely (I didn’t realize how much of my tone was being degraded by the Ring Thing until I replaced it with the H9).

The upshot is, if you have an H9, SpaceTime is definitely worth adding, and if you have and H9 Max, update your app and check it out.

Those not using the H9 in stereo can use both pairs of in and out jacks to run the device before some pedals and after others. As soon as I decided to put it on my board that ability came in very handy. As shown in the picture, I am running a Paul Trombetta Feederbone fuzz, a Jetter Jetdrive overdrive, the H9, a John Cusack Tap-A-Whirl tremolo, an MXR Carbon Copy delay, a T.C. Electronic Hall of Fame Reverb and a Boss TU-2 tuner.

I control the amount of grit coming from the pedals with my guitar volume and then the overall volume with the volume pedal. That allows me to get my drive tone and then adjust it to the dynamic levels on stage—if I need full out Feederbone fuzz on top of one of the sides of the Jetter, I can have that tone at any volume. The tremolo is randomly after the volume pedal as it doesn’t matter either way, and the MXR delay and T.C. reverb are after the volume pedal so the tails continue even when I use the volume pedal for swells.

The multitude of different effects on tap from the H9 presented a routing issue: I wanted the ambient effects (delay and reverb) after the volume pedal, but I wanted the cool “Uni-Vibe” effect and the pitch shifted “Baritone” effect both to come before the Jetter Jetdrive.

Thanks to Eventide’s brilliant Pre and Post routing option, I was able to set this up. I told Barry O’Neal at Xact Tone Audio Solutions, who actually wired the pedal board), what I wanted and he “made it so.” I am not sure how he did it. Basically, the H9 comes after the Feederbone and then sends the Jetter any H9 effects through the “pre” routing. The H9 effects I want after the volume pedal are designated “post” routing. I saved the “Uni-Vibe” and “Baritone” patches as “pre,” and all the ambient patches as “post”—problem solved! You might find you want to program two sonically identical versions of the same effect patch, one pre and one post, for different sounds. As the video above shows you can also send the kind of effects you would have on a pedal board (like the new-ish, great sounding CrushStation distortion https://www.eventideaudio.com/news/product/crushstation-now-available-h9 algorithm) into the front of an amp, while running your ambient effects through the amp’s effects loop.

It is no wonder the Eventide H9 is showing up on more and more pedalboards as word gets out about its ability to provide players with awesome sounds and fulfill real world rig requirements.