Nice Noise: Modifications and Preparations for Guitar is a must have book for anyone into experimental guitar. If you enjoyed the post Extended Techniques with Roger Kleier (who is name checked in this book), and want to learn more about extending your techniques, look no further than this slim tome by Bart Hopkin and Yuri Landman. 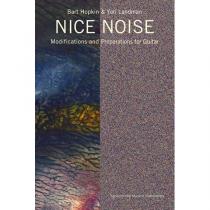 The book is profusely illustrated with detailed pictures illuminating techniques such as snared string, creating a second soundboard, weaving objects through the strings, and, as they say, much more. The audio clips referenced in the book are available on Bandcamp and are worth a listen on their own, purely as music.

Experimental instrument builder and musician Yuri Landman has made innovative custom guitars and related instruments for groups including Sonic Youth and Half Japanese. He also leads instrument-making workshops where people build their own electric instruments, and then perform together on them.

Bart Hopkin has spent years performing both solo guitar and in groups. He is also a maker of one-of-a-kind musical instruments and a student of instruments worldwide. He has written and published numerous books on instrument making and instrument makers. Hopkin is the director of a terrific organization called Experimental Musical Instruments, where you will find more inspiration for guitar modifications, as well as a wealth of other odd and amazing musical instruments.

You can purchase the book directly from the Experimental Musical Instruments website or at Amazon.

Look for an interview with both authors in the future.