Weird spitty fuzz pedals are not the only dirt devices employed by modern guitarists, and Stevie Ray Vaughn imitators are not the only guitarists who use that trusty lime-green overdrive and its clones—that sound has been an industry staple since its inception.

Plumes is EarthQuaker’s take on the type of low to medium gain overdrive that works best in conjunction with a good valve amp.  Of course it being the good folks from Akron, this version has a few twists and turns of its own. 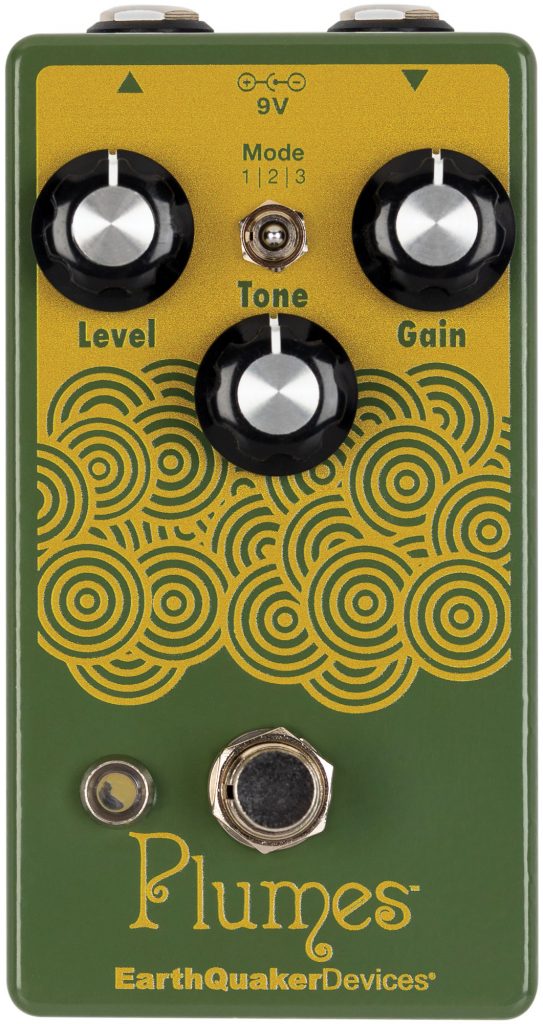 For the technically inclined, Plumes does away with the usual JRC4558 OpAmp and the BJT buffers, replacing them with low noise JFET OpAmps for a more robust and precise signal with a significantly lower noise floor. The 9v power input is internally converted to +/- 9v for more headroom. The input impedance has been raised to 10 megaohms for a stronger signal with more clarity and chime. They’ve also adjusted the cutoff of the tone control to deliver a more useful range of travel with more bass on the low end without sacrificing the midrange and top end.

Plumes offers three different clipping modes. Mode 1 is symmetrical clipping utilizing a pair of light emitting diodes. When played through a clean amp, this setting delivers a facsimile of classic crunchy valve amp tone. Mode 2 is clean boost mode, eliminating the soft clipping diodes altogether for  straight OpAmp drive. This mode can come in handy for pushing your clean tone to the fore or driving the preamp of an already overdriven amp into further breakup. Mode 3 is an asymmetrical silicon diode arrangement similar to the typical screamer but with more output and clarity; a tone some describe as “transparent.”

Plumes features EarthQuaker Devices relay-based “soft touch” Flexi-Switch Technology for both momentary and latching footswitch operation as well as a very low 25 mA current draw. Since the switching is relay based, it requires power to pass signal.

Plumes is available to pre-order through authorized EarthQuaker Devices dealers, and will be in stores on August 3, 2019.