Unlike a magnetic pickup, which translates the vibrations of the guitar strings into electronic sound, a contact microphone senses audio vibrations through direct contact with an object. The contact mic can be a boon for the modern guitarist, as a way of allowing direct translation of body vibrations, or amplifying the sound of picking behind the bridge or nut in a more direct way.

Contact mics are also terrific for sound design; you can record all sorts of scraping and tapping on a variety of objects. I have used cheap contact mics to add music box and radio sounds to live improvisations. Using a contact mic, rather than a dynamic, ribbon, or condenser, means a) a smaller footprint, and b) no worries about feedback. Still, cheap contact mics have their drawbacks, the most obvious being fidelity, but also lack of sturdiness and reliability. Enter the Cortado MkIII. 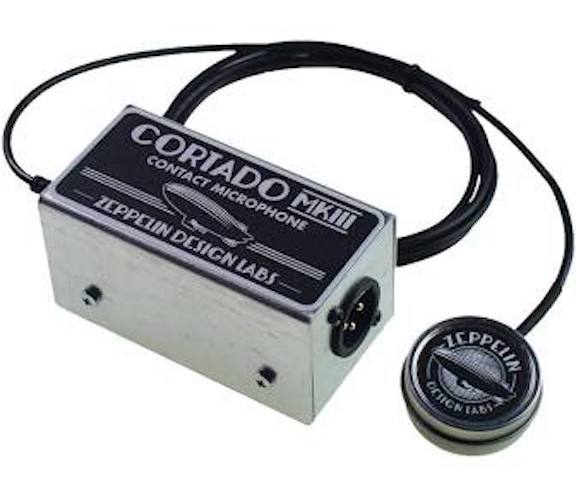 Produced by Zeppelin Design Lab  ($159.00), the MkIII is the latest incarnation of their balanced and buffered contact microphone. It comes with a phantom-powered onboard preamp circuit housed in rugged steel chassis and a 6′ (1.8m) shielded cable from sensor to chassis. It offers 23Hz – 40kHz bandwidth, and dip switches that let you modify the response with an onboard high pass filter (called “Bass Boost”), and a -10 dB pad for recording very loud sources.

The MkIII requires 24-48 VDC phantom power from a standard XLR mic cable. In return you get plenty of gain and fidelity.

I recorded behind the bridge,

and a preacher off of the radio.

Though the cheap contact mics had been able to do all these things, the lack of gain made for a high degree of noise when boosted to audible levels, and the lack of fidelity had made recording off an already fuzzy AM radio signal near unusable. The Cortado solved these problems, while giving me the confidence that, if I needed it for a performance, it would not fail me. Highly recommended for expanding the possible sounds from your instrument as well as exploring the wide world of sound design.