Vibrato is one of the most misunderstood terms when it comes to guitar effects. Vibrato refers to a continual shifting of pitch up and down in relatively small increments. Everyone seems to understand finger vibrato, i.e. your finger is pushing the pitch up slightly and then releasing it down to normal.

But when it comes to guitar gear, things rapidly go south. Leo Fender is primarily responsible for this confusion, due to his labeling what are essentially  tremolo circuits as vibrato on his amps. Tremolo is a shift in volume, not pitch, which is why it is also incorrect to call a whammy bar a tremolo arm.

A vibrato effect is created electronically by using an LFO to continually shift the pitch. Combine this with the original signal and you get chorus, so it is easy to offer the two effects in one housing. The EHX Eddy does just that and more. 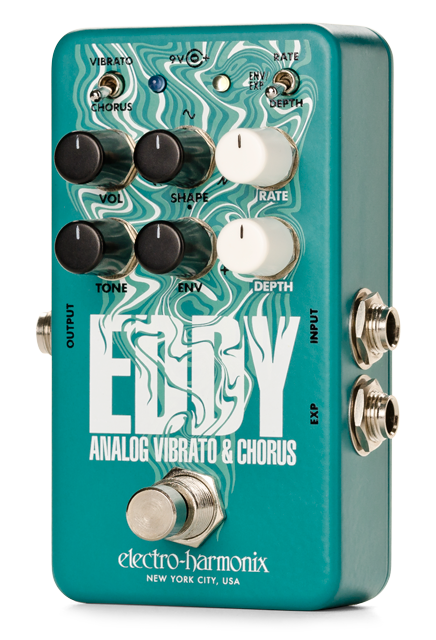 The Eddy is a pedalboard friendly vibrato and chorus with an all analog signal path. It features LFO shape warping and a tone control. One toggle switch selects between vibrato or chorus. Another chooses rate or depth control via envelope or expression pedal. Rate sets modulation speed, Depth the amount of modulation, Shape the shape of the modulation LFO, and Env determines how playing dynamics cause the pedal to respond. Shaping the effect with the envelope means you can set the effect to deepen with a harder attack and lighten up with a softer one. Or you can have it speed up with a hard attack and slow down with a lighter one or as the signal fades.

A white status LED indicates when the effect is engaged and a Blue strobing LED displays the rate and shape of the modulation. The footswitch can latch or offer momentary engagement.

The Eddy pedal comes equipped with a standard EHX 9.6DC200mA power supply and features a USA street price of $99.00.