The pedal world is rife with cryptic stompbox names that give no clue to what the pedal is or does. While the name on EarthQuaker’s new pedal, Astral Destiny, doesn’t specifically mention that it is a reverb, it’s description “An Octal Octave Reverberation Odyssey” does accurately represent the feelings this device will evoke: a literally awe inspiring trip through the cosmos. There are plenty of pedals with “shimmer” functions out there, but with its octave up and down options, and its stretch feature, which doubles the reverb length while adding an adjustable pitch bending effect, Astral Destiny carves out its own place in the firmament. A must for ambience lovers, it is also just a great sounding reverb. Thankfully it allows presets, as you are quite likely to find at least eight sounds you won’t want to lose. (See “more” for specs).

The Astral Destiny is a modulated octave reverb pedal that features eight reverb modes with eight editable presets, assignable expression control, tails for natural reverb decay when the effect is bypassed and a stretch feature that doubles the length of the reverb while adding an adjustable pitch bending effect. 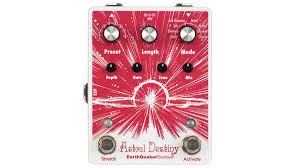 Shimmer: Adds an upper octave to the reverb tail

Sub: Adds a lower octave to the reverb tail

Sub Shimmer: Adds an upper and lower octave to the reverb tail

Astral: Adds an upper and lower octave combined with a regenerating tail

Buffered bypass switching with tails or no tails operation. Factory ships with tails for natural reverb decay when effect is bypassed