Over three years ago, Paul Vo, the creator of the MOOG Guitar and the Vo-96 acoustic guitar synthesizer, launched the Wond. This was to be the next step in EBow-style string-exciter evolution. But after a successful Kickstarter campaign, and 500 units shipped, the Wond mysteriously disappeared from sight. Now he is talking about the Wond II Project

For those who missed it, here is the first iteration of the Wond.

The Wond II is currently scheduled to be marketed as the EMpick and Vo is tossing out some fascinating upgrades that will move it well beyond mere EBow emulation.

Some ideas he is floating around include working with any gauge of string including bass strings.

Also posited is a microphone that will record any pitched sound, for example recording a sample of your own voice. The EMpick will then drive the string’s harmonics to follow your recorded sample, making your string act like an acoustic vocoder. As you work the device closer to your pickups, you will hear a re-synthesized sample note in unison with your electric guitar tone. This feature will turn the EMpick into a hand-held monophonic synthesizer/string-vocoder. You will be able to select from and manage several stored recordings. Vo is also reviewing the options for bidirectional data interconnection through wireless or USB. Supporter feedback will help guide these decisions.

The original Wond introduced tactile feedback of string proximity, an idea that was not fully realized in the first design. The goal with tactile feedback is to create the illusion of feeling the magnetic field touching the string as you play, something like way a guitar pick feels in your fingers as you pluck a string. To achieve this illusion convincingly the tactile feedback must be shaped by a far more advanced behavioral algorithm than Vo was able to squeeze out of the analog circuitry in the first Wond. This is why the EMpick will include a digital subsystem for advanced algorithmic control of tactile feedback. 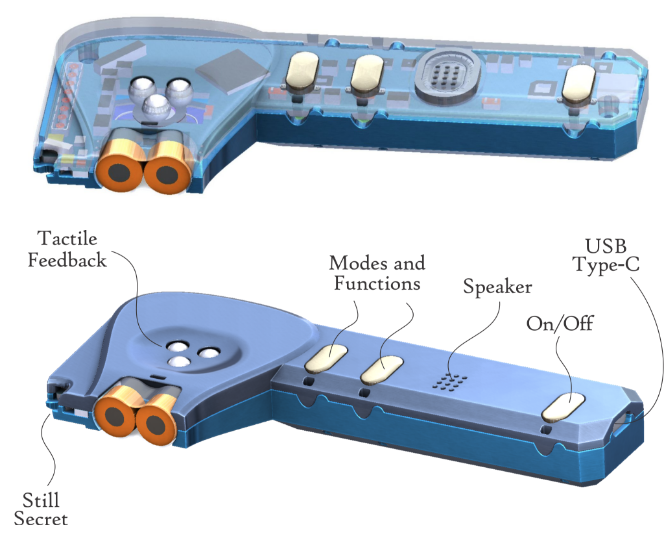 All these ideas are exciting. It remains to be seen how many of these or what others will appear in the final product, and if Vo can be more successful producing and marketing the EMpick than he has been with the Wond, the MOOG Guitar, and the Vo-96. I think I speak for all modern guitarists when I say, we really hope so, and are looking forward to this potentially amazing creative tool.