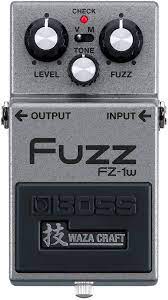 The new Hizumitas Fuzz Sustainer is a faithful recreation of Wata’s go-to distortion pedal, the Elk BM Sustainar, a Japanese variant of the very well-known “Triangle” BMP. The EQD designers tried several vintage BMPs and found each pedal was wildly different. They discovered Wata’s had something the others didn’t: heavy saturation with a gritty edge and massive bottom, while maintaining a clear and dynamic tone with enough mids and top end to cut through any sludge. All of those characteristics are built into the Hizumitas.

To commemorate the collaboration, Boris and EarthQuaker Devices have teamed with music gear marketplace Reverb.com to offer an exclusive Hiuzumitas Special Edition Bundle. Limited to just 500 units, the bundle pedal sports a unique black print on a silver enclosure. (The standard Hizumitas features purple print on a silver enclosure). Bundle buyers also get a silk pedal bag, a poster autographed by Boris, and their new 12″ single, “Reincarnation Rose.” The limited-edition 12″ is an EarthQuaker Devices Records release on blood-red vinyl.

Boss introduces the FZ-1W Fuzz the latest member of the Waza Craft family. The FZ-1W uses silicon transistors. Silicone offers more stable performance in any temperature or operating condition than the germanium kind. In Vintage mode, the Boss pedal produces a classic fuzz voice but with more gain and wider expressive range. The player can smoothly transition from heavy fuzz to crunch to crystal clean simply by riding their guitar’s volume. The Tone knob simultaneously adjusts the high and low frequencies to produce a variety of different fuzz colors. When turning down the Fuzz knob and cranking the Level, the FZ-1W works as a boost for amps and other gain pedals.

For more current music styles, Modern mode on the FZ-1W delivers a voice with focused midrange and fatter tone. The gain range is even wider than Vintage mode, and dialing the Fuzz knob past three o’clock conjures rich, singing sustain. The Tone knob also offers a different tuning that lets players tweak the brightness without altering the midrange.

1 thought on “Cool Fuzz Pedals From EarthQuaker and Boss”