Let me start out saying I respect the hell out of Joe Bonamassa. The man has carved out a highly successful career by virtue of hard work and perseverance in both his music and his business. Still, his recent comment about pedals and the people who use them begs rebuttal and who better than Guitar Moderne, home to many players who “call themselves soundscapists [continue reading for the full quote],” to accept the challenge. 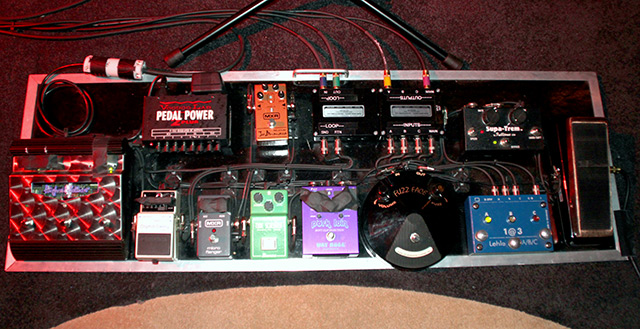 “I’ve really gotten over pedals. I can’t keep up with this craze of boutique pedals that make you sound like everything but your guitar. I can’t get my head around it. So you don’t want to play a guitar [properly] so you buy a box that makes it sound like an algorithm, like you just fired up your computer and you can spend the night staring at your fuckin’ shoes? C’mon man…

“I know I’ll get shit for saying this, but it’s fucking lazy. It’s insulting to people who spent 35 years playing and learning, like a lot of players. And we continue to work at it! These guys can barely play a chord but call themselves soundscapists. Get the fuck outta here! It’s bullshit. There’s so much masking and spin going on there. Can we get real for a minute? What do you actually play? Pick up an acoustic guitar… try that!”

On the evidence of above the picture and video, Bonamassa’s rant recalls the ravings of a reformed drunk talking about demon rum, or a former drug addict or smoker decrying the evils of their recently renounced addiction.

He might do well to subscribe to Guitar Moderne and read some of the artist interviews. He would learn that the many of pedal pounders found here have much more technique and musical knowledge than he does, but have evolved from unleashing reams of notes, be they in the rock, jazz or classical genres, to unleashing “oceans of sound,” to use David Toop’s phrase. (Read Toop’s book Joe, it might give you a different perspective).

I interviewed Bonamassa for a Guitar Player magazine cover story and he was friendly and self-effacing, willing to admit that his style was largely an amalgam of the two Erics: Clapton and Johnson. Unfortunately his rant sounds like Trump playing to his constituency. While Bonamassa rehashes classic rock riffs, albeit brilliantly, for an audience stuck in the Sixties and Seventies, the players found in Guitar Moderne are seeking the sounds of the future, using whatever machinery is available—not unlike Joe’s heroes Hendrix and Beck.

I am sure if he listened to artists like Eivind Aarset, Nick Reinhart and Anthony Pirog, or just considered his friend Oz Noy, he would understand there are players harnessing technical prowess to technology in ways that move the music forward. But even if a guitarist’s technical ability is less than virtuosic, their understanding of sound and the tools to create it may result in a fresh, emotive approach: The Edge anyone?

I am sure it is not all about technique for Bonamassa, else how could he revere Albert King? I think he is just a victim of an age in which provocation gets clicks and any foolish thing we say in a heated moment gets spread worldwide.

There will always be purists in love with the past while the some of us boldly go where no man has gone before. And, as with all things, there great and terrible practitioners of each approach.

That said, we can all appreciate the sound of a great guitar, played straight into a great amp, by a great player, so go get ’em Joe.

11 thoughts on “Bonamassa Vs. Pedals”