Full disclosure: Though Source Audio is not one of my advertisers; I am their rep in Nashville. As with my advertisers, I don’t claim they make amazing things because I work with them, I work with them because they make amazing things, so I feel touting them at every opportunity is providing a service to you, the reader. The latest fab product from Source Audio is the True Spring Reverb pedal

True Spring lets you choose among the reverb tones of vintage combo amps or the “drippy” sound of a tube driven outboard spring tank. Each reverb effect works in tandem with any of the pedal’s three tremolo effects (Opto, Bias, and Harmonic). The pedal features a four-knob control surface, high-powered 56-bit processing, stereo inputs and outputs, deep editing capabilities with the Neuro Editing system (a free download for mobile or desktop), true or buffered bypass, bypass trails, full MIDI functionality when connected to Source Audio’s Neuro Hub and external tap tempo and tremolo engage/bypass with the Source Audio Tap Switch.

The True Spring Reverb is housed in a single width pedal. The center toggle switch selects between three styles of spring reverb. The four control knobs adjust the reverb’s Mix, Level, Dwell, and Tone. With the Control Input button held down the toggle switch selects between the Opto, Harmonic, and Bias tremolo effects. Pressing that button also converts Dwell to Tremolo Depth and Tone to Tremolo Rate. While choosing the tremolo effect, the pedal maintains its currently selected reverb type and settings. 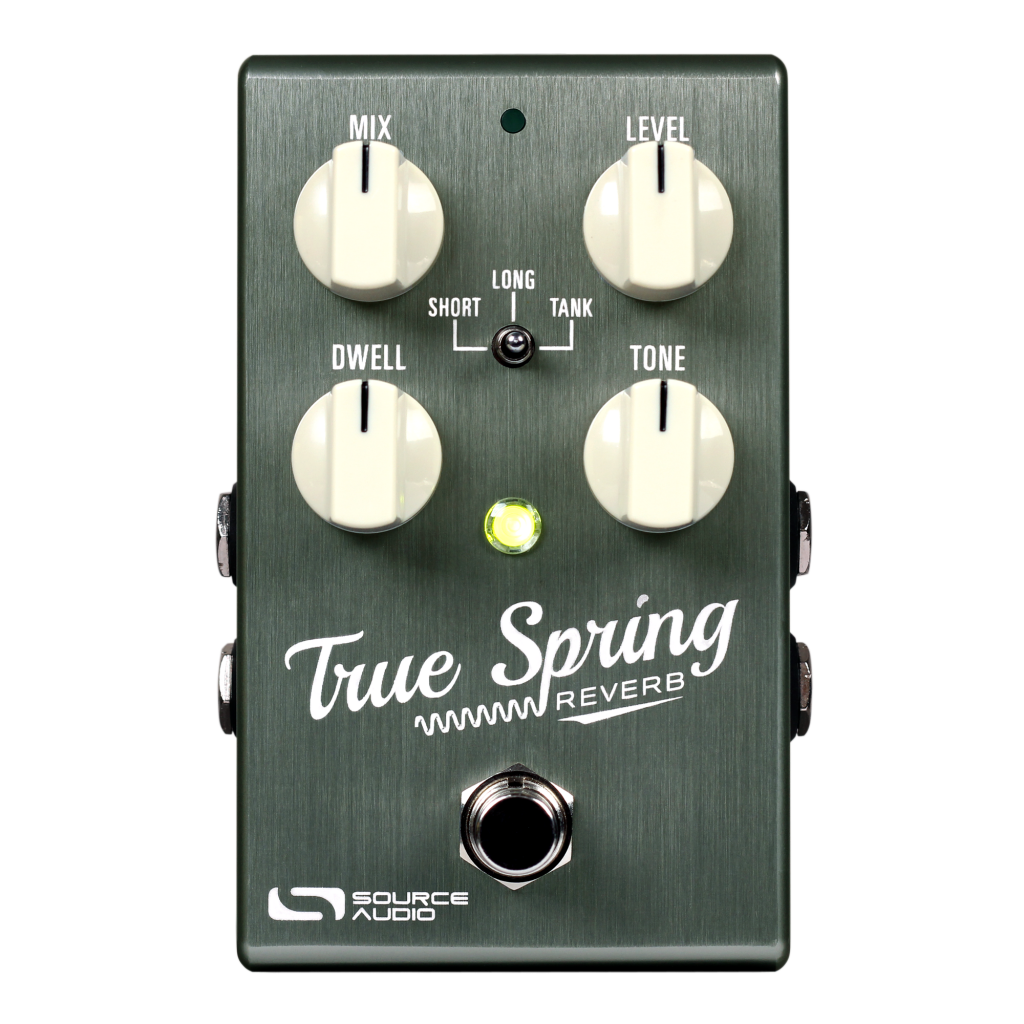 With the addition of the Source Audio Tap Switch (available as an accessory or in the True Spring Reverb Deluxe Package), the tremolo rate can be adjusted on the fly. The beat divisions include quarter, triplet, eighth, dotted eighth and 16th notes. It is also possible to use the external Tap Switch to engage and disengage a tremolo effect over an active spring reverb engine.

The Neuro Editing systems are free downloads for iOS and Android mobile devices as well as Mac and Windows based computers. The Neuro Mobile App offers alternate virtual spring lengths, extended EQ possibilities, advanced signal routing, reverb pre-delay, reverb modulation, and the option to place the tremolo effect before or after the reverb tank (two very different and equally awesome effects). After creating highly customized presets with the Neuro Editor, users can organize them, save them to the cloud, and share them with other musicians in the Neuro Community.

The street price of the True Spring Reverb is $229. A Deluxe Package, which also includes a Source Audio Tap Tempo Switch, is available for $249 street. True Spring Reverb joins Source Audio’s Nemesis and Ventris in offering a smaller, less expensive, (and available) alternative to a Strymon product, with no sacrifice in build or sound quality.