One advantage of performing with guitar through a laptop is the ability to use plug-ins, in addition to pedals. As many amazing and out there pedals as there are, there are still some sounds you just can’t get from hardware. Too, there is the level of control—static and evolving—over parameters, available with plug-ins, but not yet with pedals. 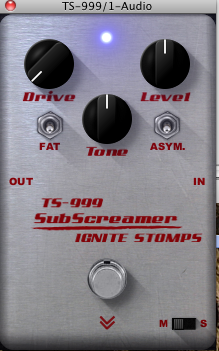 Here is a list of seven plug-ins (okay, a couple are suites, but seven sounds sexy) I have used over the years in recording and performance.  They range from vintage emulations to spectral and granular effects, and best of all, they are all FREE!


I use these plug-ins hosted by Ableton Live  on a Mac running 10.6.8. I can’t guarantee they will work on Mountain Lion or the latest Windows, but hopefully at least some of them will.

If they work for you, please donate something to the developers; they have created wonderful music making tools and should be rewarded with coin of the realm. Also, where appropriate, check out their paid products, as, for many, the freeware is a kind of advert for the stuff for sale.

Sound clips are grouped together on Sound Cloud (Warning: unmastered, so the volume fluctuates from clip to clip). Individual descriptions below. 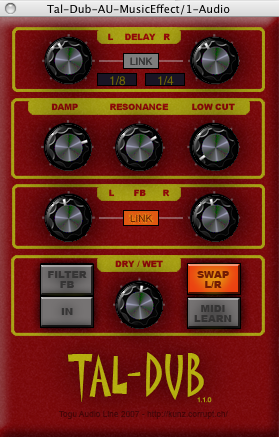 Tal Togu is programmer Patrick Kunz’s nom-de-developer. He offers an amazing range of  free virtual effects and synthesizers. They are all worth checking out, but the TAL-Dub vintage delay effect is a must-have.

Using the Damp and Resonance knobs, you can evoke classic tape and dub effects, but with two independent (or linked) delay lines, it offers much more than retro sounds. With the resonance cranked it will self-oscillate and you can play the resulting pitch like a Theremin by MIDI assigning the Damp control to a knob, fader, or Source Audio Hot Hand MIDI-EXP Controller.

He says that this plug is no longer supported, but it is downloadable.

Sound Clip: I just played one distorted chord. Left and right feedback controls were linked to a hardware MIDI controller, as was the Damp control.

Ignite makes hardware amplifiers and effects, as well as virtual amplifier and effect plug-ins. This overdrive plug-in is natural sounding and dynamic. It works brilliantly with Live’s Amp and Cabinet plug-ins. 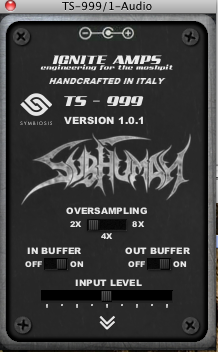 Sound Clip: I played a part through an Ableton Live plug-ins, Amp and Cabinet, set for clean. First you will hear it without the 999 and then with. Note how the distortion reacts to the strength of my picking. I can play clean chords by just lightening up. 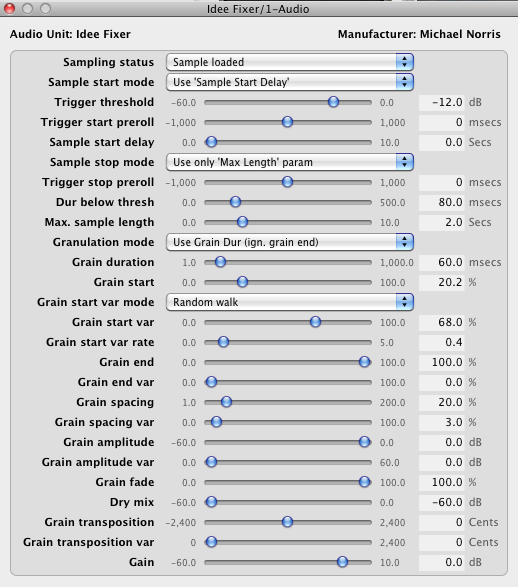 Michael Norris is a Wellington-based composer, software developer and music theorist. His free suite of plug-ins offers a wide range of effects currently unavailable with hardware.

The term “spectral,” as applied to effects, refers to the fact that the effect is applied differently to different frequency bands of the audio material. For example: Spectral delays allow you to delay a particular frequency range of a signal while leaving the rest of the spectrum dry.

SoundMagic Spectral is a FREEWARE suite of 24 Audio Unit plug-ins that implement real-time spectral processing of sound. They allow enormous audio processing control and creativity, from audio files or live audio. SoundMagic Spectral builds on the work of the OS 9 software known as SoundMagic DSP, taking it to even more exotic sonic realms.

I have had great fun with the Dronemaker and Idee Fixee, but all have enormous potential for sonic mangling in real time.

Sound Clip: A short phrase played into Idee Fixee and captured is on the right, while a chord pad created with Dronemaker is on the left.

Another vintage delay clone, this one from Genuine Soundware. 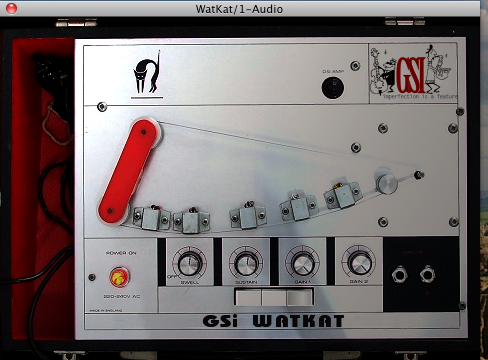 A famous British Tape-Echo Unit, the Copicat was the first repeat-echo machine manufactured as a compact unit. Designed by Charlie Watkins in 1958, thousands of this model were sold by the all around the world; most of them are still running.

WatKat is a digital “clone” of a Wem Watkins “Custom” Copicat. It sounds very lo-fi, noisy, and irregular.

This is a unique sounding delay—think early Dave Gilmour.

Developed by Koen Tanghe at Smartelectronix, the KTGranulator is a free delay line granulator. It was inspired by the great DLGranulator effect in Ross Bencina’s AudioMulch. 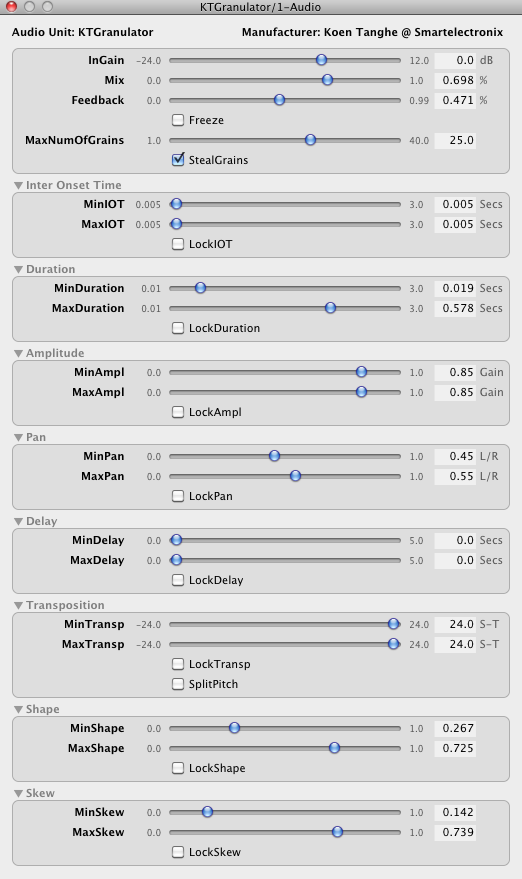 Incoming (mono) sound is fed into a delay line from which small pieces of various durations and at different moments in the past are selected. Each piece is then amplified, transposed and enveloped to form a “grain,” Each grain is also randomly panned and the whole mix is sent out to a stereo output stream. Feedback of the grain output back into the delay line is also provided, and the delay line can be frozen so that the grains are only taken from what is currently stored in the delay line.

And here is a composition of mine under my alias, prehab, making use of the KT Granulator

Tom Erbe started creating free tools for electronic music and audio in 1991 with SoundHack and more lately with a series of plugins and externals for Mac, Linux and Windows. 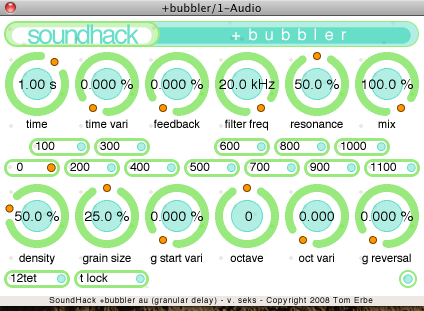 For the more tech-oriented: SoundHack Delay Trio is a group of three plugins derived from the same basic delay algorithm: a hermite interpolated delay line with variable modulation, and a feedback loop with dc blocking and saturation. Pitch shifting is achieved with a dual head crossfading delay (ala Eltro Tempophon/Dennis Gabor/Pierre Schaeffer phonogene) and is decidedly low-ﬁ. The saturating feedback also allows them to be great drone and noise generators.

The three plugins are +delay (classic delay effects),+pitchdelay, (essentially the same plugin with controls oriented toward pitch shifting), and +bubbler (a granular delay in which grains are pulled from the delay line with randomized start time, delay time and pitch shift value).

Not your vintage delays, these three will create sounds unavailable in classic hardware or virtual models thereof.

Sound Clip: Separate clips featuring the same arpeggio, one run through +pitchdelay and  one through +bubbler.

If you work with grooves and rhythm, this is a no-brainer. Stormgate1 turns simple guitar notes and chords into chopped up, groove-a-licious patterns that can be user created. A swing feature ensures that your parts will fit with any drumbeat.

There they are: a plethora of great-sounding audio modifiers, many of them used by professionals. Hopefully they will work in your system. If so, be sure to tip your developer, he is working hard for you.