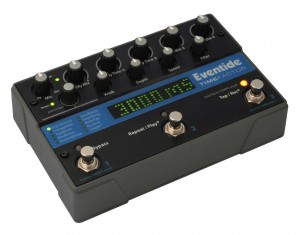 Eventide’s high-quality multi-effects, reverbs, and harmonizers have been showing up in the best studios and the rigs of professional performers for decades. The company’s “Factor” pedals are designed to offer the legendary sound and reliability of these rack units in a stompbox format. TimeFactor handles mostly delay, reverb, and looping effects, while ModFactor specializes in modulation: chorus, phasing, filtering, and the like. 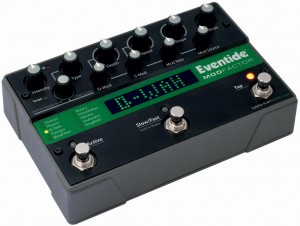 Both units are housed in metal casings, sporting 11 knobs and three footswitches. Each stompbox offers 1/4″ stereo audio I/Os, as well as MIDI in and out. Mini toggles next to the I/Os choose between Guitar or Line in and Amp or Line out. An Aux switch input allows you to add up to three more footswitches, while a USB port connects to a computer for system updates, patch storage, and to sync with a DAW. An expression pedal input lets you control any number of parameters with a single foot pedal. TimeFactor features Digital Delay, Vintage Delay, Tape Echo, Mod Delay, Ducked Delay, Band Delay, Filter Pong, MultiTap, Reverse, and a 12-second Looper. ModFactor contains Chorus, Phaser, Q-Wah, Flanger, ModFilter, Rotary, TremoloPan, Vibrato, Undulator, and Ringmod. These names are self-explanatory except for Undulator, which is described as containing two delays, two detuned voices, and an FM modulated tremolo.

SOUND AND EASE OF USE

All the effects on these two pedals are awesome—as rich, full-bodied and complex as a cup of Kona blend. While not as programmable as some rack units, the Factor pedals allow you to go deep into crafting sounds. In addition to normal parameters like delay time, blend, and feedback, TimeFactor lets you get under the hood of its Mod Delay and Filter Pong to select the waveform you prefer for modulation duties— square, triangle, or sine. ModFactor dedicates a whole row of knobs to modifying the modifiers; in other words, you can automatically change the depth or speed of modulation over time. Tempos in both pedals can be tapped or synched, with the tempo saved separately to patches, or set globally.

The manual assumes a certain level of sophistication, but these pedals are so intuitive that even a newbie should have no trouble having fun—especially since that the most fun is just plugging in and twisting the knobs. I was blown away by the bubbling modulation that TimeFactor’s Filter Pong added to its ping-pong delays. I also loved the fact that, in addition to the usual overdubbing, half- and double-speed options offered by the looper, it can be set so that early dubs fade as later ones are added, for loops that morph over time. And as for ModFactor—you haven’t lived until you have heard a square wave-modulated chorus, with its depth modulated by a Ramp LFO that makes the effect stronger and weaker as you play.

All is not perfect in Factor-land: I found that the parameter you are tweaking disappears from the screen if you ponder too long before turning a knob. Too is you manhandle your gear, these pedals may not stand up under the onslaught. Quibbles aside, these effects offer a wealth of studio-worthy sounds and rack mount flexibility in a space and money saving stompbox.