My grateful thanks to Henry Kaiser, a modern guitar pioneer himself, for taking time to review the new book on modern guitar icon Keith Rowe. —mr

Three guitarists in the 20th Century made unprecedented and giant leaps in technique, personal expression, improvisation, and musical conception. Sonny Sharrock, Derek Bailey, and Keith Rowe each introduced innovations that were to become bedrock upon which most of the guitarists covered in Guitar Moderne built their careers.

Bailey, Sharrock, and Rowe are like the first space explorers to set foot on other worlds, with Keith Rowe being perhaps the one of the triumvirate to swim through alien oceans of sound and improvisation that have received no other visitors.

When it comes to reading material about these guitarists, there is no actual book about Sonny Sharrock and his invention of free jazz guitar, and only Ben Watson’s disappointing  biography of Derek Bailey. Fortunately, we now have Keith Rowe: The Room Extended [powerHouse Books] Brian Olewick’s beautifully written and well-researched biography of AMM’s Keith Rowe—the man who put the guitar on the table.

In addition to being a guitarist, Rowe was also a painter. Inspired by the way Jackson Pollack eschewed conventional techniques, placing his canvases on the ground to paint, Rowe was the first to establish horizontally-played “table guitar,” caressing and attacking the instrument in unconventional ways, striking and exciting it with a wide variety of objects and preparations previously unconnected with strings and fretboard. He was also a pioneer in musical conception and the consideration of sound itself, as well as a radical explorer of new ways to improvise. 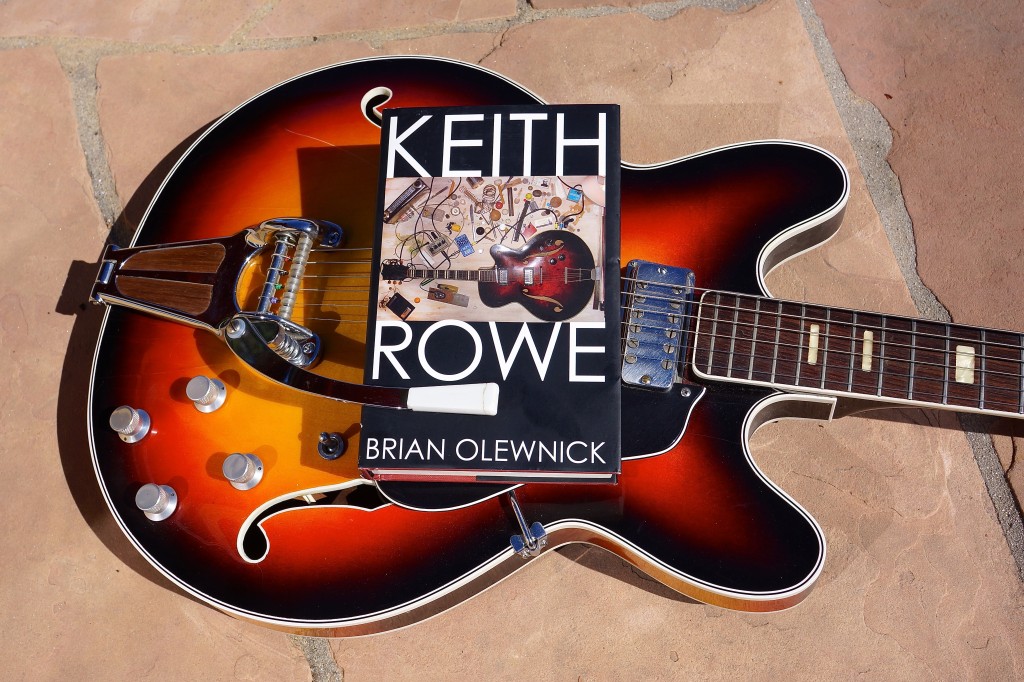 My one meeting with Rowe was when I played in Derek Bailey’s Company in London, in 1990. My old pal Eugene Chadbourne was there, as well as a a young Jim O’Rourke, to whom Derek introduced me and Eugene. After Derek introduced us all to Rowe, we all proceeded to musically collaborate, entering the sound worlds he created. I had been listening to his recordings for years, but being in the same room with him was a truly enlightening experience. My understanding of what he was up to expanded like a supernova. The light from that explosion traveled to all the times I had and have listened to the recordings he created with AMM and other improvisers. It is easy to be struck by the amazing sounds he creates with a guitar on a table, but the deeper surprise and wisdom comes from the way he places his ideas and reacts to sound, space, and time with other improvisers.

Back in 1965, Rowe was a founder of AMM  a British improvisation ensemble that wanted to revolutionize the way music was created: No melodies, no solos, no aversion to silence, and completely improvised. At the time, this was extremely radical. Somehow, AMM and Keith Rowe have maintained that radical agenda to the present and it is well chronicled in the book. As the book goes farther back to his childhood, we discover more of the story and its context in post-war Great Britain.

Those who have not heard Rowe would be well served by listening to CDs of the AMM group, as well as of his solo guitar performances. The contents of the book and included discography can point the way for those explorations. A lot of AMM music does not survive low quality MP3 audio or YouTube videos. It needs to be heard in full bandwidth, where the silences are big and dynamic.

It’s rare for those living in the USA to see Rowe live, but reading Olewnick’s book is almost as valuable an experience as seeing him perform. It is certainly a well-penned academic bio, but what is more interesting than the academic content is the guitarist’s story and the amount of information about how he conceptualizes sound and music in ways that most musicians could never imagine.

For someone interested in going “beyond” with music and with guitar, this essential history will help you set your sights on places no musician has gone. There are many tools and suggestions for this throughout the text. The book can be read as I enjoyed it: an assignment to go for it yourself, while being as uncompromising and hard working as Keith Rowe. It is an inspirational book about guitar, the nature of music, and the human expression of it.