The Vauxflores Number 23 ($179, not including shipping and handling) numbers among the various fuzz-centric buzz-boxes with “heterodyned, atonal artifacts” that seem to be gaining popularity among modern guitarists. Like the Trombetta Tornita, Z.Vex Fuzz Factory, and a number of pedals at this year’s NAMM, in Feedback mode the Vauxflores Number 23 emits random self-oscillating pitches when the guitar volume is rolled down—I guess that’s what “heterodyned, atonal artifacts” means. The pedal is designed in San José, Costa Rica, and each one is hand-built.

Originally introduced in 2011, the current version includes: Top-mounted jacks and a compact enclosure to accommodate ever more cramped pedalboards, a traditional volume control with an added boost to the top end, a switchable feedback control, and artwork derived from a Bioprinting piece featuring artwork created by amplified earthworms—Okay. It requires a standard 9-volt  adaptor

The pedal provides Volume, Tone, and Blend controls that perform those traditional functions, but are also interactive in terms of how they affect the artifacts produced. 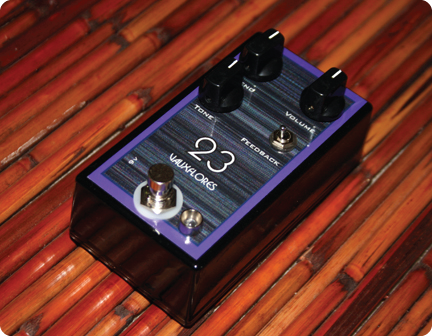 Though, with the Feedback off, you can wrest almost traditional octave fuzz and ring modulation sounds out of it, its general timbre is on the raspy square wave side, making it ideal for synth-like sounds, especially when combined with filtering or slicer type tremolo.

The Vauxflores Number 23 is a quintessential dirt pedal for the experimental guitarist; with the Feedback switch engaged, the Number 23 is like riding a wild animal: powerful, capricious, and thrilling. When playing standard lines or chords, you can almost control it by cutting off sustaining notes or chords, but the fun is in the unpredictable nature of the artifacts that appear as they fade. Depending on where the Blend and Tone are set, rolling back the guitar volume can create sustained lower notes (that bear little relation to the note played) or a string of notes that cascade down.

I got to the point where I could control the repetition of the effect enough to create musical (to my ears, at least) patterns, as well as call and response effects, but, bottom line, the more expansive your definition of musical, the more fun you will have with this pedal.