While many younger archtop-wielding young jazz guitarists seem to have stopped listening to jazz after Wes Montgomery, another breed springs off Pat Metheny, Bill Frisell, John Abercrombie, and John Scofield, who themselves were greatly influenced by Jim Hall. Thomas Dahl falls in the later group, one distinguished by flowing legato lines, deep attention to sound, and a willingness to draw from all music and beyond. His latest outing with Skydive Trio contains all those touchstones in a set of soaring melodic instrumental improvisation, but Dahl does everything from backing singers to pushing the envelope of Avant-noise, as this interview and the accompanying videos reveal.

I was into Hard Rock: Kiss, Deep Purple, AC/DC etc. I heard Stevie Ray Vaughan at one point, and that hit me hard. The energy and focus in his playing are things I always look for in music. It doesn’t necessarily have to be at that decibel level, but I need music with nerve. I was also into the rock guitarists: Yngwie Malmsteen, Van Halen, Stevie Vai and Joe Satriani. With Vai, comes Zappa, and, if you like Zappa, you are by definition curious. So from there it went in every direction.

I’ve always had a lot of different music around me. There are lot of classical musicians in my family, and there is a lot of curiosity amongst us. So whenever I didn’t understand, I got curious. I needed to understand. The nice thing about music, and arts as a whole, is that curiosity won’t kill you. You don’t break a leg when you take chances. So, for me, it has always been about searching as wide as possible. Try to learn as much as possible. And there is still so much to learn.

There was this thing on Face Book where people were challenging each other to make top ten lists of their favorite records. I found it very hard to do. There are hundreds of records that I love, so I made a chronological list of the ten records that changed my perspective:

I’ve worked with all kinds of music, from backing pop artists to really eclectic contemporary art music. I never really asked myself who, or what I wanted to be. I’ve just been practicing my guitar and copying great musicians of different instruments. I listened a lot to Pat Metheny when I grew up. I think I can copy him to a certain degree. But I never felt that the bands I was in needed that type of sound—it’s “his” sound. So I always did something else. You could say the same for the other guitarists I listened to: John Scofield, Bill Frisell, John Abercrombie, Scott Henderson and Allan Holdsworth. I studied them all deeply and learned a lot from it. So you will hear bits and pieces of all of them, but it would feel strange to consciously try to be one of them. My style is a mashup of all my inspirations, musicians, music, arts, movies, and emotions—all my references.

That varies according to what project I’m in. In Skydive Trio it’s all about the journey. We have our songs, but they vary from gig to gig, all depending on the vibe in the room. I like to play dynamic music: music that takes you from one extreme to another, from loud to almost nothing, from a big room to a small room. When I think about music I often visualize it as if it was made for scenes in a movie. I don’t think it is important that the listeners know what happens inside my head, but I feel the process helps the music get across.

I build my own Warmoth guitars. It’s my only hobby. I love to experiment with shapes and different types of wood. The main guitar at the moment is a Gibson scale Warmoth Tele with Stacked Seymour Duncan P90s and a Seymour Duncan 5-2 in the middle. It also has a Tone Monster Octane overdrive built in.

As for amps, I’ve been through them all. I travel a lot and use rented amps, so I usually end up with Fender amps of some sort. On Skydive trios Sun Moee recording I used an old Fender Bassman 50-watt, the mother of all guitar amps. It works well with pedals and sounds good both on high and low volume. At home I use a Frenzel Super Deluxe amp; it is a really great sounding amp with many possibilities: sort of a Bassman with a tighter Plexi-like preamp. It compresses really nicely right before it breaks up. I prefer to set the amp to the “breakpoint” and lower volume with a volume pedal or push the front with a boost to get drive. Amp drive is the best drive ever. You need the wet effects in the effects loops to do that of course. 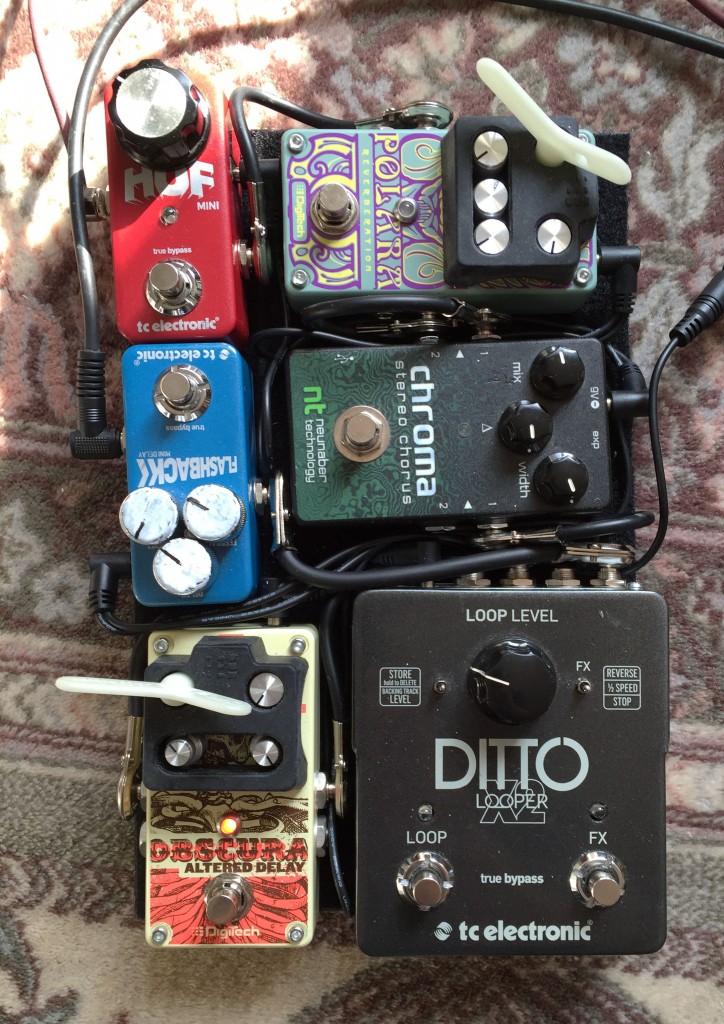 My pedal setup is divided. I have the thing that go in the effects loop on one board, and things that go in front of the amp on another. On the loop board I have delays, looper and reverbs. At the moment it is: TC Electronic mini Flashback, TC Ditto X2, Digitech Obscura Delay, Neunaber Wet (Shimmer) Reverb, Digitech Polara Reverb, and the TC mini HOF reverb. I can control effect levels on most of them with my foot with the Option Knob, so it’s fairly versatile. 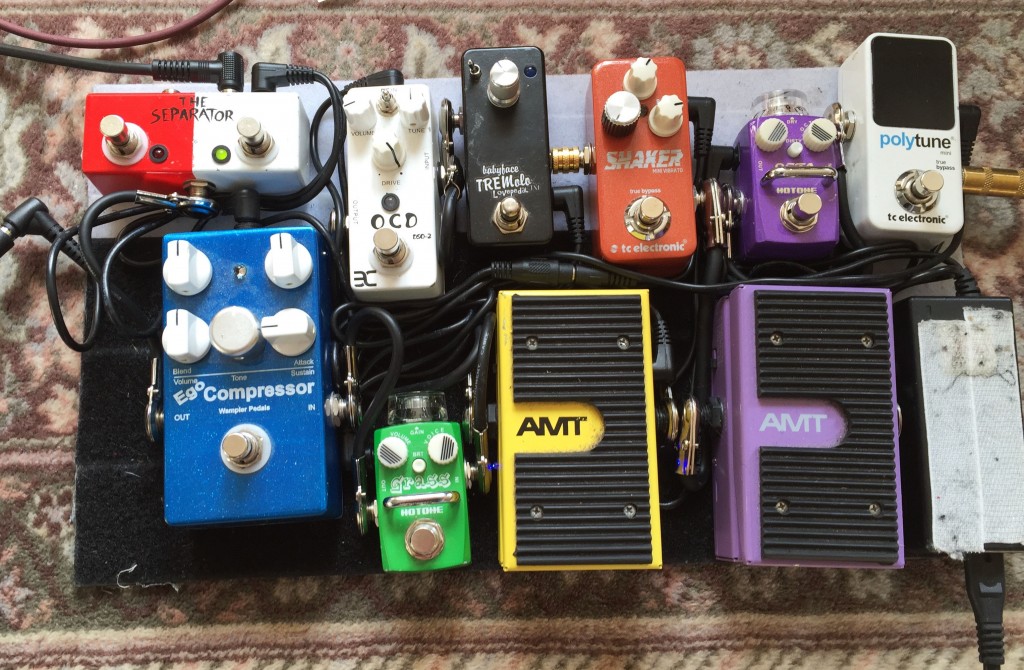 In Front of Amp

I like them both, but they have very different qualities. When I play live I have much more dynamic range. What you do in a studio is supposed to fit into a much more compressed medium. So the thing I need to do when I do session work is balance out the dynamics and volume parameters with tension and nerve. It’s hard to catch the live feel on record, and why should you? Live also has a visual aspect, which you lose on a recording. For me the two are different ways of communicating, and I enjoy them equally.

I’m not sure. I think I’m a musician that mainly musicians know about. For the most part I’ve worked as a sideman, which is the role I prefer. I never spent too much time building a following.

Anyone of my heroes that is alive. Wayne Shorter, Joey Baron, Marc Johnson are the first names to come to mind.

The main two at the moment are Skydive Trio and Mats Eilertsen’s Rubicon. The Skydive trio consists of myself, Mats Eilertsen on bass and Finnish drummer Olavi Louhivuori. We have worked together for eight years, first in Mats Eilertsens Quartet (w/Tore Brunborg on sax), where we released Radio Yonder (Hubro 2009, second in Mats Eilertsens Skydive Quintet (adding Alexi Tuomarila on piano), releasing Skydive (Hubro 2012), and now as a trio. I always felt a bit too out front in the trio format, but in Skydive Trio I feel very much a part of a total sound. We recently released Sun Moee (Hubro 2015), which has gotten great reviews.

Mats Eilertsens Rubicon was a commissioned piece for the Vossajazz Festival in Norway. We recently recorded the material with a seven piece band, and are hoping to release it in the near future. We will be touring with Rubicon this fall.

Most of my activities are in the northern part of Europe. But from time to time we go further. Skydive trio is planning a tour of Japan in December, otherwise you can follow me on my website or on Face Book.