My Potato Eaters bandmate/Keyboard magazine editor/drummer extraordinaire/modular synth maven, Gino Robair met Sara Ardizzoni while in Italy and suggested she contact me. I am so glad she did. Her unique combination of melody, noise, looping, grooves, and vocals is emblematic of the kind of modern guitar music this site was created to promote. Please enjoy her words and spread the word so she can give up her day job—she deserves it.

“Proficient” still seems to be an unreachable concept, the goal of an endless process. When I started taking guitar lessons I was already an avid listener, into a lot of music genres but I first became familiar with the fretboard through some blues progressions and folk songs. As soon as I put some skills together I started composing my own music—long, weird, instrumental tracks. I’ve been playing for years in many bands and just in the last four years developed my solo set as Dagger Moth.

It’s not something I did on purpose. It’s tightly connected to the way my ears have evolved, with a taste for certain sounds instead of others. Ever since I was a kid I’ve been exposed to a lot of good music, ranging from jazz to psychedelic rock, from blues to classical music, and then in my teens I started following my own sonic path. Weirdly enough, although I’ve always been based in a small town in northern Italy my background is very far from the “Italian tradition” and much closer to English and American music. My curiosity has always been a good engine, keeping me constantly hungry for odd, surprising, nourishing sounds. However I’m not anti-mainstream a priori. I can enjoy an Eminem hit as much as Arthur Russell’s most intimate whispers. My not being easy to pigeonhole is connected to a couple of issues: when unleashed, my brain tends to make a spontaneous mash-up of many influences, and I get bored very easily, so I prevent boring myself by wandering along some unexpected pathways. I’m often asked what genre of music I play, and I’m not exactly sure of the answer yet.

I’ve been inspired by so many musicians, not in the sense that I’ve tried to reproduce their styles by becoming a copycat, but more in the way they’ve opened my mind and my heart and instilled a deep curiosity for sound, more than passion—a true obsession.

By listening to a lot of old and new music with an open mind, feeling free to explore different territories but at the same time giving myself some boundaries (in terms of arrangements, gear, live set), otherwise the risk is to get carried away by too many possibilities, especially as a solo act.

Every time I start a new project I try to step away from my comfort zone, challenging myself a little bit more. Oftentimes I aim at turning obstacles into opportunities in a creative way, both on the technical and logistical level. I feel a kind of kinship with skateboarders in terms of approach.

I wish I had time to practice daily for many hours and improve different techniques. To some extent, it’s like experimenting with new color palettes. Unfortunately, I don’t live off of music so my few spare hours are never enough.

There’s a quote from Sonny Sharrock that, as you already know, is dear to me: “I want the sweetness and the brutality, and I want to go to the very end of each of those feelings. I’ve been trying to find a way for the beauty and the terror to live together in one song. I know it’s possible.” I’m particularly captivated when an artist is able to portray extreme emotions within his/her own style. To me music is the most direct, intriguing, mysterious means of communication. I’d like to convey a particular atmosphere able to swallow the listener into the “bubble” of my own little world for a while. My music gravitates towards a certain melancholy, but in a sort of gritty way. Basically, I work on the song form, trying to expand structures or make them derail here and there, towards some unexpected solutions. I don’t force myself in this direction; it’s just something that happens quite naturally. Besides, I think that finding a good melody can be more challenging than creating a seductive soundscape, so I like to work on that as well as on noises and a bit of chaos.

I have quite a lot of backline for a solo act. As Dagger Moth, I started using mainly an Epiphone Sheraton through a Sound City head, but in the last two years I’ve been playing a Jazzmaster Classic Player through a Vox Ac 30 CCH. The first thing I look for is a good clean sound and this combination seems to suits me and to be a good value for money. I have some other guitars and amps and many pedals, but for this set I obviously decided to pick just a few.

First, I usually run my guitar through a chain of pedals: Boss Tuner and Tremolo, Ibanez delay, Boss MO2 Multi Overtone, Marshall Guv’nor, and a ProCo Rat. They go into my amp and from the amp’s effects send output through a Korg Mini Kaosspad, into my loop station (Boss RC50), to an Ernie Ball volume pedal and back to the return input. I use the RC50 more or less like a mixer, using the stereo outputs and the settings available to split the signal individually for every patch/phrase, to send a guitar line and guitar loops to my Vox AC30, while sending electronic samples and voice loops to my RCF active speaker. I also use a TC Helicon Voice Live Play for a couple of presets with just a bit of delay and reverb, and a Korg Mini Kaossillator as a stand-alone instrument for some weird sounds, like on the track “Event Horizon.” The Mini Kaosspad works as a multi-effect on my guitar, so that during some songs I must know exactly where to lay my fingers on its grid at the right in time for the right effect, while for others it’s just pure fun making noises. 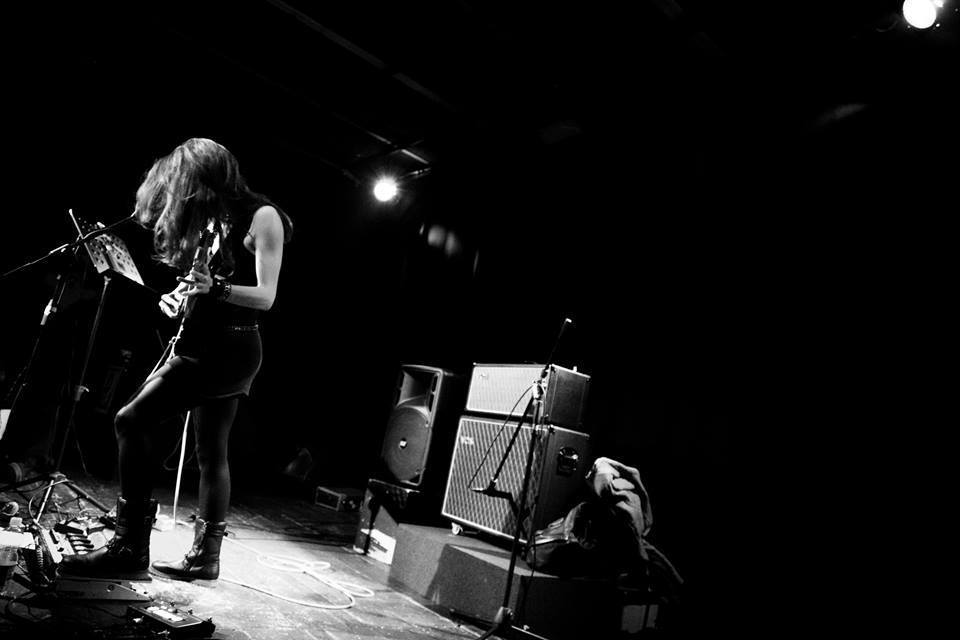 For the home recorded demos that went on to become my last record (Silk Around the Marrow) I enjoyed messing around with some plug-ins for synths and beats (Absynth, Kontakt), sometimes making them sound weirder by applying filters. In the studio we also ran some of the electronic samples through a huge Lombardi tube amp and some analog pedals in order to get a fatter sound. SoundToys are also amazing plug-ins, for example the Crystallizer (on the guitar for the outro of “Shadowboxing”).

I usually start composing from my guitar, in a sort of inverted process, where the beats are created later to fit the riffs. I often enjoy doing things you’re “not supposed to,” like using tapping not in the typical metal-shredding way but in order to create rhythmic patterns you can almost dance to (“Grow a Shell”), or to sound similar to a synth (“Ovaries”); or trying to make odd tempos sound “straight” and “appealing” for a pop song (“Birthmark”, “Shadowboxing”). I also used an EBow for “Dyrholaey,” both for the noise/drone intro and for the harmonized loops that unravel through the whole song

I enjoy both recording and playing live, they’re two sides of the same coin to me, they both incorporate elements of discovery. In the studio you have the thrill and the freedom of translating your ideas into something more “tangible” for the first time, it’s like the birth of something. But live performance is the dimension where you have to measure yourself with the ability to convey your emotions and your technical skills while facing an audience, being in the moment even if you’re tired, scared of judgment, or feel you’re in the wrong place at the wrong time. I’m always alone on stage, dealing with some very precise moves, so playing live often becomes very exciting and challenging on a psychological level, but it has also helped me discover new aspects of my personality I wasn’t aware of while playing in bands.

I can’t live off of my music and I’ve always been totally into DIY: I’m my label, booking agency, and press agency. I try to build an audience by taking advantage of the interconnectivity offered by the Internet and by social networks; this allows me to skip some intermediates. It seems that I’m often labeled as a “niche musician,” so I rely a lot on word of mouth, playing live as much as I can, taking my music around like a door to door salesperson. Over the years I’ve managed to build my little infrastructure of clubs, promoters, webzines, and music companions. More than ever, if you’re not a full time musician, you need to be really focused and tenacious in order to take care of the less creative aspects connected to your music, since they absorb a lot of precious time and energy.

I am very lucky, because in the last three years I’ve had the chance to collaborate with two of my favorite musicians: Marc Ribot on my last record (on the track “Event Horizon”) and Joe Lally from Fugazi on the previous one (on “Out of Shot”). When I was a teenager, Marc’s style and sensitivity really opened my perspective to a whole new world and he’s is still incredibly inspiring to me. So were, and still are, Fugazi, with their energy and work ethic. I hope there will be the opportunity to share music and ideas with both of them again. There are many other more or less well-known artists I’d like to cross paths with, but if I had to list some, since dreaming is for free, I really wish to collaborate with John Frusciante, Beth Gibbons, Nels Cline, Lee Ranaldo, Shahzad Ismaily, Mike Watt, Colin Stetson and Belgian choreographer Wim Vandekeybus. The reasons I would play with each of them would be too long to analyze, but the one thing all these artists have in common is a certain stylistic boldness, as well as a unique voice.

I’m currently performing as Dagger Moth, a solo set I started about four years ago, after quitting the bands I was with. I decided to take a six-month break to come up with ideas for a solo project, thinking about how to use a loop station in a way that wasn’t just the stereotyped layering of one riff over another nor the “karaoke style.” I tried to mix live loops of guitar, vocals and noise with prerecorded electronics fading in and out of the songs. Now it looks like I’m almost tap dancing while I play and sing on stage. My first album as Dagger Moth was self-titled and the second one, out since April 2016, is called Silk Around the Marrow. I’ve always released my own records. Recently I’ve also had the support of a distributor, (Audioglobe), so my last album is also available on Amazon, Spotify, ITunes, and on my Bandcamp page, along with the previous one.